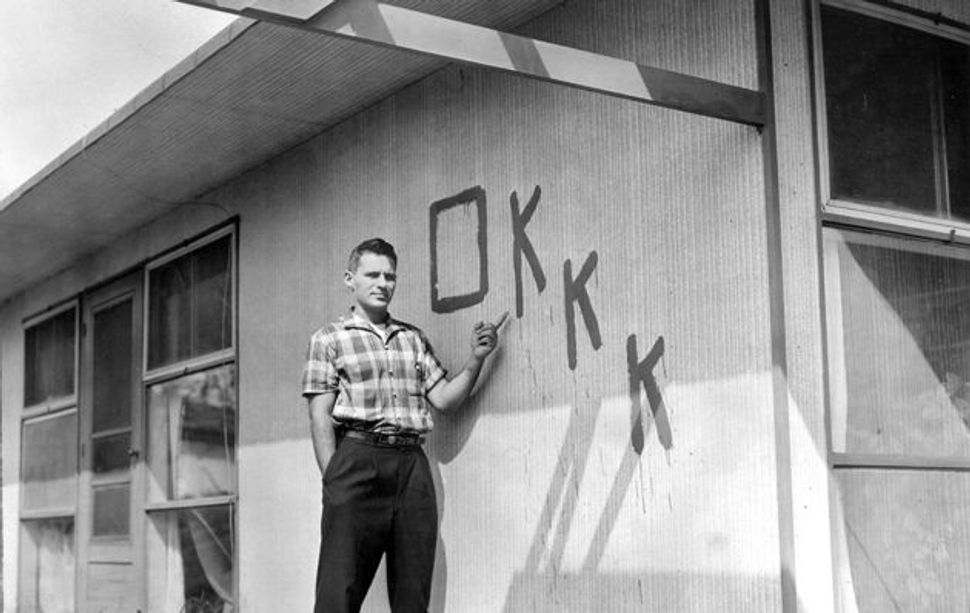 It?s Not OK: Lew Wechsler points to the side of his home. Image by COURTESY OF DAVID KUSHNER

Virtually since its founding on New York’s Long Island in 1948, “Levittown” has been a byword for conformity: houses, people, aspirations; a kind of origin narrative of suburban homogeneity. But David Kushner, in “Levittown: Two Families, One Tycoon, and the Fight for Civil Rights in America’s Legendary Suburb,” tells a darker story that shadows that narrative — a story of difference, coming to an explosive climax of racial violence over the summer and fall of 1957 in the second of William Levitt’s meticulously planned communities. Levitt’s career-long commitment to a whites-only policy is both an ugly story and a revealing one, for it dramatically wounded the post-World War II suburban promise of a fresh start and of safety and community, and it highlighted, early on, the fragility of that promise and the complexity of Jews’ relationship to it.

In July 1957, Bea and Lew Wechsler, a Jewish couple from the Bronx, challenged Levitt’s restrictive covenant by arranging for the private sale of the house next door to them in the Pennsylvania Levittown to an African-American family. As soon as Bill and Daisy Myers and their two children moved in, they were confronted by threatening phone calls and hostile, rock-throwing neighbors. Over the next few months, local vigilantes mobbed neighborhood streets and stoned a local police sergeant who was assigned to protect the Myers family; Confederate flags, purchased at the area’s Shop-O-Rama, began to fly in neighbors’ cars and windows, crosses were burned on lawns.

The state attorney general’s office had to step in to end the violence and bring its perpetrators to trial. Prominent Jewish organizations joined both the National Association for the Advancement of Colored People and the American Civil Liberties Union in opposing Levitt’s racist policies, and the Federal Housing Administration threatened to cut off mortgages on his next Levittown. “Astonishingly,” Kushner writes, “Levitt still refused to back down” — stubbornly making plans for yet another whites-only Levittown, in Willingboro Township, N.J., and fighting legal challenges through the New Jersey court system until, finally, the U.S. Supreme Court refused to hear his case.

Kushner builds effectively to this climax by intertwining a set of narratives that reveal a more textured truth about Levittown than the famously stereotyped image of “ticky-tacky” houses has perpetuated — and than Levittown itself promised. The Wechslers’ trajectory toward Levittown was shaped by the couple’s experience as leftists and tenant activists in the Bronx and by their hopes for the middle-class leveling of suburbia; Bill and Daisy Myers’s dream of suburban homeownership was rooted in their experiences of racist disenfranchisement in the Jim Crow South.

Suburbs developed rapidly in response to the return of post-World War II veterans, who had GI Bill financing to back them but nevertheless faced a severe housing shortage. In turn, Levittown’s astounding growth epitomized suburbia’s emergence in the 1950s as the grand arena of America’s expectations for upward mobility. And William Levitt and his father, Abraham, and brother, Alfred, proved themselves innovative masters of modern mass-production techniques and design advances —managing by November 1951 to build 17,447 homes near Long Island’s Hempstead, outfitted with the latest appliances, at such attractive prices that 1,500 buyers lined up (many camped overnight!) to buy 650 homes in the first round of sales.

William Levitt’s assertion of control over every aspect of the visual landscape — Levitt & Sons would, for example, arrange (and bill) for the trimming of any lawn whose care did not meet company standards — evidences how closely the hope and order fleshed out in Levittown were matched in Cold War America by fear and suspicion. But because Kushner does not make enough analytical sense of the stories that he intertwines, the legacy of the summer of racial tension in the Pennsylvania Levittown still feels incompletely written. Kushner cites Levitt’s assertion that “Negroes were trying to do in six years what the Jews had not been able to completely do in six thousand… if I sold to Negroes, ninety percent of the white people now buying homes would not buy.” And he emphasizes how Levitt insinuated that his critics were Communists and how Levitt even courted Joseph McCarthy’s legislative support for favorable mortgage financing by giving McCarthy a personal tour of the Long Island Levittown. Yet, Kushner does not sharply examine the linkages between McCarthy and Levitt or directly consider how the race war at the Pennsylvania Levittown reiterated the American unreadiness to live with difference that McCarthyism fed on. And Kushner’s description of the Levitts as “icons of optimism, titans on par with Walt Disney and Henry Ford,” stops curiously short of linking William Levitt to Disney’s anti-Communism and Ford’s racism.

In facing off the Jewish developer Levitt and the Jewish activists the Wechslers on fresh suburban ground, Kushner also leaves hanging another set of provocative issues. Was Levitt’s invocation of Jewish experience in defense of his whites-only policies simply a hypocritical cover for his own unrepentant racism, or a version of the self-erasure that had led him to bar Jews from Strathmore, his first pre-Levittown development on Long Island? And how many layers of resentment were packed into such epithets as “nigger-loving Jewish motherf——-s” that their Levittown neighbors spat into the Wechslers’ phone?

The drama of post-World War II Jewish suburbanization attests not only to Jews’ upward mobility, but also to their ambitions toward the status of whiteness that their newly achieved middle-class standing conferred. Yet when television’s Molly and Jake Goldberg left the Bronx for the suburbs, a year before the Levittown Wechslers, their relationships with their gentile neighbors were frequently vexed by invisible cultural codes — even as images of the Cleaver family on “Leave It to Beaver,” beamed into living rooms and kitchens brightly outfitted by Levitt & Sons, projected an ideal of postwar prosperity and domesticity into which difference rarely intruded.

This book at once wedges an important crack into the surface of the story of suburbia as either static or homogeneous, and leaves unsettled a set of compelling questions about otherness, including the place of Jews in the history of difference in American suburbs.

Joanne Jacobson is the author of the memoir “Hunger Artist: A Suburban Childhood” (Bottom Dog Press, 2007).