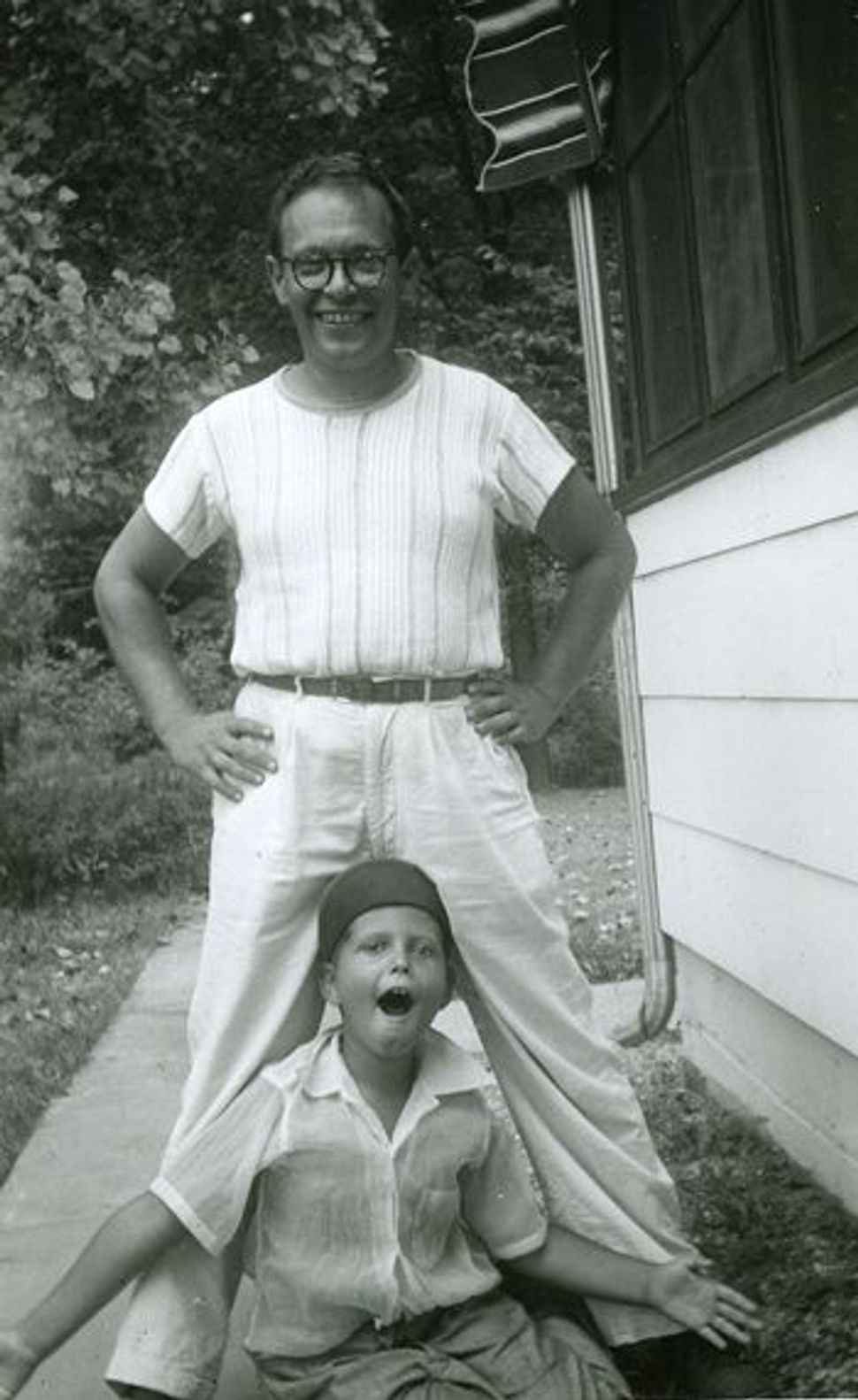 Not the Enemy: Isaac Rosenfeld, the father, and his son, George. Image by COURTESY OF DANIEL ROSENFELD

Born in Chicago in 1918, Isaac Rosenfeld was a wunderkind. he wasn’t even 20 when he collaborated with his buddy Saul Bellow on “*Der Shir Hashirim fun *Mendel Pumshtock,” a brilliant parody of T.S. Eliot’s “The Love Song of J. Alfred Prufrock.” In 1946, his semiautobiographical novel, “Passage From Home,” was hailed by Diana Trilling as “the fullest articulation of generational conflict between Jewish fathers and sons,” and as a work of “profound universal meanings.” Irving Howe praised “Passage” as “rich and warm” and “bright with intelligence…. The novel is not merely a promise, though it is certainly that; it is a fulfillment.”

Rosenfeld won a 1947 Guggenheim Fellowship to write his next novel. But alas, he proved to be a one-book wunderkind. Rosenfeld spent more and more of his time playing his recorder, sitting in his orgone box and engaging in extramarital affairs. Impatient with his literary, psychological and bohemian persona, critics began to look elsewhere for the great American novelist. Many of them found this novelist in Bellow. Rosenfeld died of a heart attack at age 38. 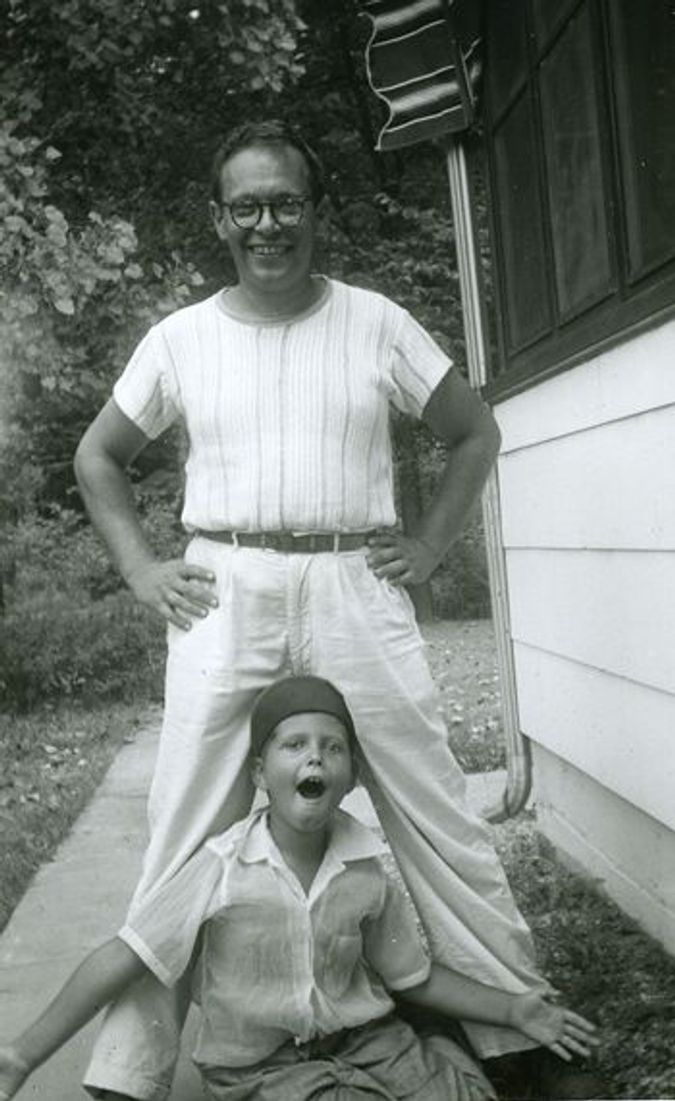 Not the Enemy: Isaac Rosenfeld, the father, and his son, George. Image by COURTESY OF DANIEL ROSENFELD

In “Rosenfeld’s Lives: Fame, Oblivion, and the Furies of Writing,” Steven Zipperstein, a professor of Jewish culture and history at Stanford University, draws on a “small mountain” of unpublished manuscripts and a cache of candid journals and letters, and provides a poignant portrait of literary aspiration and achievement. Zipperstein does not make a compelling case for the enduring importance of Rosenfeld’s fiction. He tries instead to capture “what it felt like to write, or, as was often true, to be unable to do so.” Like so many of his contemporaries, Zipperstein suggests, Rosenfeld found middle-class values devitalizing. But in his “gray, grim apartment,” he seems to have “admired more lavishly than he ought to have” a “bookless day-to-day existence” that was “given to dissipation.”

Rosenfeld continued to write. “The Enemy,” his homage to Kafka, ran to hundreds of handwritten pages. At Yaddo, a colony for writers that was located in Saratoga Springs, N.Y., he worked three or four hours a day on the paradox of Mahatma Gandhi, whose flaws, he thought, were essential to his greatness. To understand him, he wrote, one must understand how and why he connected “chastity, self-realization in politics, and the belief that a man’s diet should consist only of fruit and nuts.” Rosenfeld envisioned writing another manuscript, “Mother Russia,” as his “Crime and Punishment.” He told friends that yet another novel, an anatomy of life in Manhattan’s Greenwich Village, would be a “Gogol-like masterpiece.”

Fluent in Yiddish, Rosenfeld wrote about Jewish life with “a frankness that cut deep.” He believed that neurosis — and therefore, Jewishness — deepened a person’s sense of alienation in a fractured world. Rosenfeld’s essay “Adam and Eve on Delancey Street,” Zipperstein reminds us, offended many readers of Commentary by linking Jewish dietary laws to sexual repression, and proposing that Jews abandon both.

Rosenfeld insisted that the murder of Europe’s Jews was the defining experience of modernity. Well before the Holocaust became a staple of American culture, he understood that its terror left victims feeling numb or complicit, with only a few rare souls able to suspend their doubts, end the conspiracy of silence, and help fashion just and durable political institutions.

Why, then, didn’t this prodigiously gifted and erudite man produce more? Was it his bohemian proclivity to live in the moment at the expense of all that is lasting? Was it his skeptical stance toward rationalism and science, which rendered his work abstract, vague and metaphysical? Was it his attachment to the wacky sexual theories of Wilhelm Reich?

Zipperstein isn’t all that certain. In his journal, Rosenfeld addressed his inadequacies: his failures as a husband and father; his intractable childhood phobias; his fears of homosexuality — and the toll they took on his writing. And yet, Zipperstein acknowledges, it’s by no means clear “how truthful, or better said, how truthfully characteristic journal entries are.” As vessels of angst, discontent, depression and self-loathing, journals, Cynthia Ozick has observed, “are notoriously fickle, subject to the torque of mutable feeling, while power flourishes elsewhere.”

Once he “gets used to the gloom” and recognizes that though “there is no communication… yet there is a hell of a lot of noise,” the writer could get down to work. Alone at 3 a.m., “when it’s always the dark night of the soul,” the man who “much of the time is afraid” sees himself as he really is, and sees others as they are.

Insisting that Rosenfeld had a literary voice “as intelligent as Bellow’s,” Zipperstein concludes with the suggestion that had Rosenfeld lived in the 1960s, he “would have understood better than most” mainstream and counterculture life and letters. Maybe, just maybe, his battered tone, “built of nightmares,” would have found an audience.