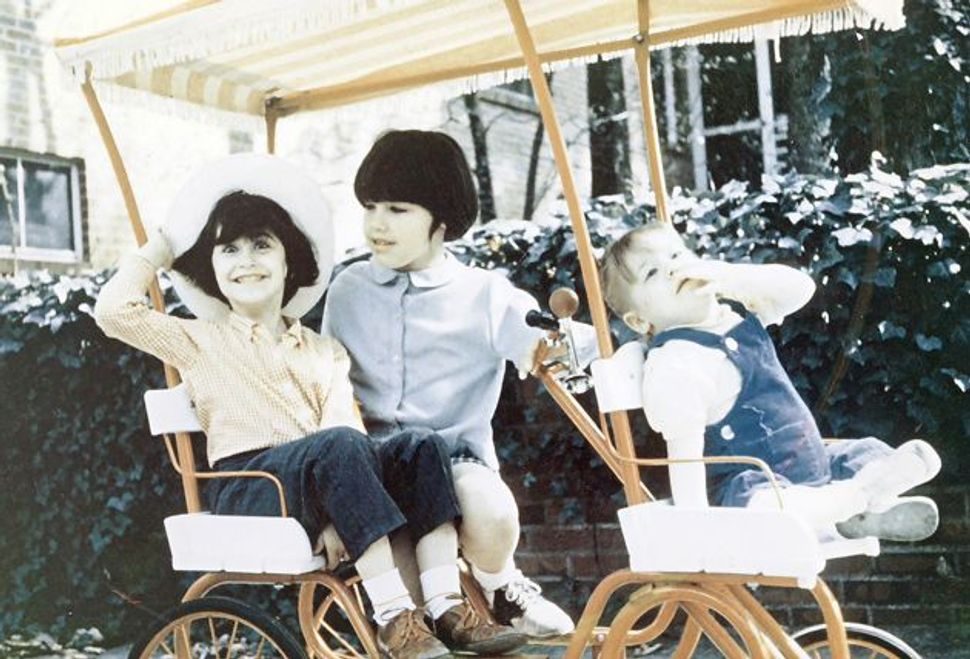 Sisters on a Wild Ride: Susie (left), Jessica and Sarah share a moment. Image by COURTESY OF JESSICA HANDLER

Susie Handler died of acute lymphocytic leukemia in 1969, when she was 8 years old. Her sisters, Sarah and Jessica (ages 4 and 10, respectively, at the time), grew up in the aftermath, with the next inevitable trauma looming: Sarah had Kostmann’s syndrome, a bone marrow disorder even more rare than the disease that killed Susie. She would die, too.

From the time she was young, Jessica — the eldest and perpetually “well sibling” — never doubted the day would come when she would be the last sister standing. She grew up steeled for bad news, accepting of illness, but also waiting with dread (and guilt) for her turn to come. When Sarah died at age 27, having lived longer than anyone expected, Jessica (then 32) was left wondering what it means to be a sister without siblings.

“Asking if a person has brothers and sisters is an ordinary question,” Handler muses in her graceful, affecting memoir, “Invisible Sisters.” “Most people never think twice about how to answer. For years, I examined my answers. Should I spare the inquirer’s feelings and soft-pedal my response? How would I do that and still be truthful? Lying would be efficient, but disloyalty to Susie and Sarah was unbearable.” Her experiences with sickness have left her marked, she thinks. As if death is something strangers can smell on her.

Of course, it wasn’t always that way. Handler’s parents, Jack and Mimi, began their marriage as idealistic secular Jews dedicated to the burgeoning civil rights struggle, contented people who took delight in their daughters. They raised their young family in Atlanta, moving there in 1965 because Jack wanted to work with the Southern labor movement and help change the world. But amid his dedication to noble causes and the greater good, he was swiftly undone by Susie’s death. Jack spiraled into mental illness, while Mimi became the dwindling family’s rock. They quietly decided it would be best not to dwell on what they’d lost.

Handler chronicles it all with moody elegance and incredible clarity, striving to portray her sisters as people with their own lives and experiences, rather than as just products of her memory. (“I can’t have sex with a man if he’s got ugly hands,” she recalls Sarah telling her, pajama-clad and 19.) Still, she knows that their collective story is hers to tell — and so as much as Susie and Sarah are their own people, they are also their surviving sister’s personal ghosts, women she can’t help imagining in the adult lives they would never inhabit. Particularly in Susie’s case, Handler has to extrapolate from tiny, seemingly ancient shards of information. When Susie was 6, she wanted to be a nurse, and so in her older sister’s daydreams, that’s her logical profession.

Even with this sister forever frozen in childhood, it’s hard to understand Sarah (the family’s youngest child) aging beyond a sibling who was born before her — awkward for her parents and older sister, as well as for Sarah herself. Dealing with illness aged both girls beyond their years. Handler reflects: “They learned ugly and difficult things that I didn’t know about living in a body. They were wiser than me by circumstance.” And so age proves unstable, offering little more than vague guidance about how to gauge one’s grief.

As Sarah and Jessica grew up together in the wake of Susie’s death, they tried assuming the roles of “normal” siblings: a teenager who’d rather be smoking pot with her friends than baby-sitting her kid sister. When they could, the two of them were thrilled to ignore each other, “[relishing] the chance to push away like oppositional magnetic poles.” But with Sarah constantly in and out of the hospital — the symptoms of Kostmann’s syndrome “read like the Passover recitation of the plagues” — there was never much room in their relationship for resentment or misunderstandings.

Though she committed herself early on to being the family’s archivist and kept extensive journals, Handler says she can’t quite trust her own memories without sisters to back them up. It’s more a refusal of authority than it is an apology or an excuse: Handler’s remembrances — from a scary dream Susie once told her about, to Sarah’s 16-year-old glee at being allowed to borrow their mother’s car — have an immediacy and level of detail that show the writer can summon these scenes as a kind of reflex, letting them play out behind her eyes in a practice that’s part comfort, part torture. Years after the loss of both sisters, Handler talks to her husband about them regularly, confusing verb tenses and “snaring a sister in temporal limbo. ‘Susie had the best laugh… You would like her.’” She knows the intricacies of her family’s story so well that she can slip between the years, attuned to how readily past and present become tangled, yet too invested in accuracy to be enticed by the confusion.

It’s all too easy to call a story like this “heartbreaking,” a word applied to so many painful situations that they all begin to blur together into a sense of generalized tragedy. Though “Invisible Sisters” will induce tears, it’s no calculated tearjerker. Handler’s attention to the layers and tricks of time joins her abiding, unselfish curiosity about what happened to her family to make hers more than just another sad story. Intimate without being insular, it’s a meditation on making loss your own without letting it claim you.

Eryn Loeb is a writer in New York City.