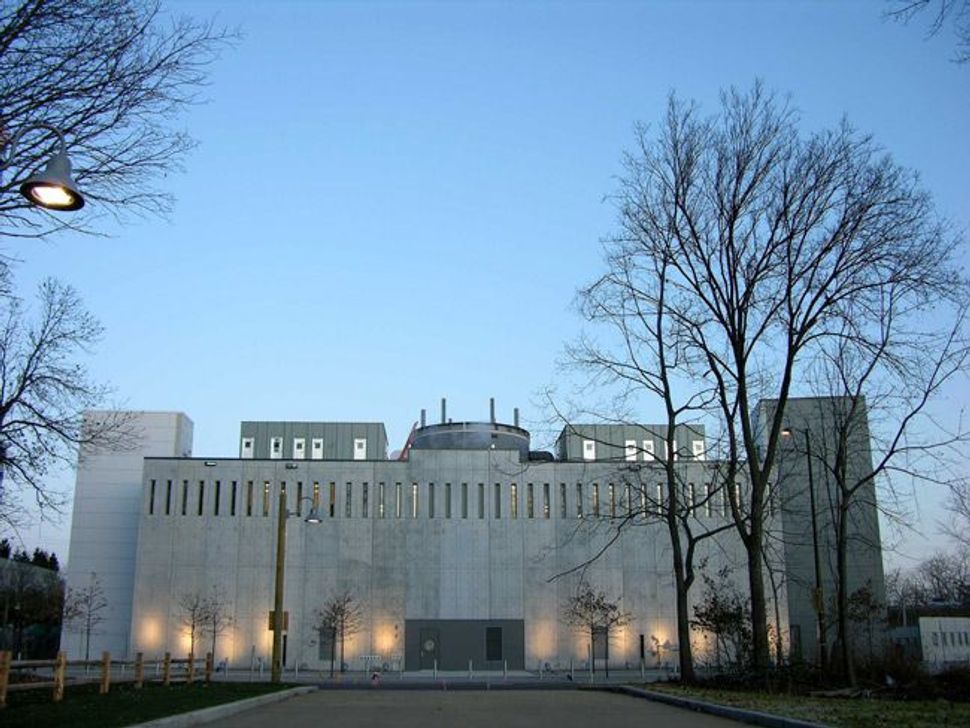 The rear of the new Illinois Holocaust Museum & Education Center in the Chicago suburb of Skokie.

Ever since the dedication of the United States Holocaust Memorial Museum in Washington, D.C., in 1993, America has witnessed a Holocaust museum construction boom. The Museum of Tolerance (Los Angeles, 1993), the Holocaust Museum Houston (1996), the Museum of Jewish Heritage — A Living Memorial to the Holocaust (New York City, 1997) and the Holocaust Memorial Center (suburban Detroit; 2003) are merely the most prominent examples of a new genre of architecture that has found increasing expression in a variety of American cities.

Now, Chicago joins the list. On April 19, the new Illinois Holocaust Museum & Education Center will be dedicated in the suburb of Skokie. The dedication date’s symbolism is transparent, corresponding, as it does, to the weekend before Yom HaShoah, or Holocaust Remembrance Day. The symbolism of the building’s architecture is, by contrast, far more complex. Among all recent American Holocaust museums, the IHMEC is unique by virtue of its deeply encoded Jewish meanings. Indeed, it marks a distinctly Jewish turn in American Holocaust museum architecture.

Ever since the early 1990s, the prevailing trend in Holocaust museum design has been to communicate a sense of the Nazi genocide’s horror in architectural form. This trend has been most visible in the exterior use of concentration camp iconography, such as the brick guard towers of the USHMM, the oversized crematorium smokestack atop the Holocaust Museum Houston, and the striped prisoner uniforms and barbed-wire motifs at the HMC.

Such vivid imagery was originally embraced as an evocative postmodern alternative to the bland neutrality of modernist-inspired Holocaust museums, such as Yad Vashem in Jerusalem and the Museum of Tolerance. Yet, in recent years, this imagery has come under fire by critics who have accused it of being overly explicit and insensitive toward the memories of survivors. The new IHMEC avoids this trend by forgoing literal evocations of the Holocaust in favor of subtle meditations on its theological and cultural significance.

The museum’s Jewish features can be traced to the broader architectural philosophy of its architect, Stanley Tigerman. One of the best-known representatives of architectural postmodernism in the United States, Tigerman has long explored Jewish themes in his work. Back in the early 1980s, he earned attention for provocatively declaring that postmodernism was “a Jewish movement,” a claim reflecting his conviction that postmodernism’s stylistic eclecticism was rooted in a dualistic “Talmudic” mindset opposed to the purist “Hellenic” principles of modernism.

This view of Jewishness as eclecticism was visibly articulated in Tigerman’s diverse designs for private homes in the late 1970s, such as the daisy house, the hot dog house and, fittingly, his Kosher Kitchen for a Jewish American Princess. But later in the decade, Tigerman embraced a darker vision of Jewishness, echoing the claims of Jewish de-constructivists such as Peter Eisenman and Daniel Libeskind that the ruptured condition of the post-Holocaust world required a corresponding architecture of instability and loss.

Not surprisingly, Tigerman drew directly on these and other theoretical ideas in designing the IHMEC. These ideas have influenced the museum’s design in a mostly nonliteral sense. But visitors aware of the building’s philosophical underpinnings will be able to spot where its motivating ideas find architectural expression.

The initial thing one recognizes about the IHMEC is that it is composed of three distinct structures. The first, containing the museum’s entrance, is an ominous-looking building, clad entirely in dark-gray anodized metal. Its appearance is dominated by a series of steel gables, forms that, as Tigerman explained in a recent interview with the Forward, are meant to recall the fact that “Jews in concentration camps were kept in horse barns that had gabled roofs.” This wing fittingly contains the museum’s permanent exhibit, which chronicles prewar Jewish life and the path to extermination.

This building is connected to a hingelike structure that Tigerman calls the “cleave.” Deriving from Tigerman’s tendency during the 1980s to “cleave” his designs into fragmented parts, the structure takes the shape of a fan and is intended to serve as an open “book of remembrance” commemorating the Nazis’ Jewish victims. At the cleave’s western end is a cylindrical form that rises above the entire museum and is engraved with the names of Jewish victims — just “as Jews had their numbers burned into their arms,” Tigerman noted. The cleave is also where visitors encounter one of the museum’s most prized artifacts: an early 20th-century railway boxcar — the kind used to transport Jews to the death camps.

In turn, the cleave leads to the third structure, which is clad in white anodized metal and houses the museum’s education center. It is devoted to chronicling the liberation of the camps and the struggle of survivors to make new lives for themselves in North America, Israel and elsewhere. This wing also contains a Hall of Reflection, which is intended for contemplation. After lingering in this space, visitors proceed to the building’s exit, which is deliberately placed far away from the entrance. The separation of the two passageways, Tigerman hopes, will symbolize the museum’s ability to provide a “transformative experience” to visitors who, upon departing, will not be the same people they were when they arrived.

The IHMEC’s symbolism, however, goes far beyond simple color coding (black for evil, white for redemption) and displays more hermetic features. The museum’s two main facades face east for religious reasons. The dark-gray structure, Tigerman explained, is “oriented toward the Western Wall of Jerusalem’s Temple Mount,” to hold its destruction in memory. The white structure, meanwhile, is “oriented due east, in anticipation of a messianic age.”

Religious significance also surrounds the museum’s tripartite structure. Tigerman explains that the three wings of the building relate directly to kabbalistic cosmogony. The most important part of the building is the cleave — what he calls the “wound” — which symbolizes the act of zimzum, or God’s original contraction into himself to create the universe. The dark building, meanwhile, represents the moment of shevirat ha-kelim, when the divine light produced by the act of zimzum shattered the vessels containing it and gave rise to evil in the world. Finally, the white building symbolizes the task of tikkun olam, repairing the damage — in this case, through the process of education and remembrance.

In adding this layer of religious meaning to the building, Tigerman may be courting controversy, for his design can be seen as suggesting that the Holocaust had divine origins. To be sure, Tigerman is a secular Jew who rejects the idea, common among certain ultra-Orthodox sects, that the Holocaust was divine punishment for the Jewish people’s modern waywardness.

And yet, he has hinted that European Jews prior to the Holocaust were unable to sense the direness of their situation. In a 2007 lecture at Yale University, Tigerman declared bluntly, “The tribal nomad, the wandering Jew, who in the 20th century wandered into a Holocaust of unimaginable proportions by denying the realities of one increasingly unsympathetic state, would have been better off remaining an outsider.”

This comment focuses attention on what is probably the most iconic Jewish element of Tigerman’s design: two 35-foot-high “evacuated columns” flanking its front entrance. Made of metal lattice, the see-through columns are ghost versions of Jachin and Boaz, the legendary pillars that stood in front of Solomon’s Temple in Jerusalem until destroyed by the Babylonians in 586 BCE. Symbols of absence, they evoke Jewish loss, exile and suffering.

They also stand as implicit warnings against assimilation. Provocatively placed in front of a Holocaust museum, these symbols of Jewish exile pessimistically suggest that Diaspora Jews’ method of coping with their outsider status — trying to become insiders — is doomed to failure. Not too long ago, Tigerman suggested as much, pointing to the recent worldwide upsurge in antisemitism in declaring: “If Jews think that they will [be able] through assimilation [to] get rid of the antagonism that is so innate and so deep and so old, they’re smoking something and I don’t know what it is. You’ll never get rid of it…. One needs to remain vigilant.”

These comments point to the final aspect of the IHMEC’s Jewishness. Whereas most American Holocaust museums have embraced the universalistic lesson that intolerance poses dangers to all people, the IHMEC offers a more particularistic message, aimed specifically at Jews: Remember the Holocaust, and assimilate at your own risk.

It is too early to know whether the museum’s architecture will be able to communicate this sober message to ordinary visitors. It is equally unclear what the visitors’ response to it might be. What is undeniable, however, is that by injecting deeply personal ideas about the modern Jewish condition into the design of the IHMEC, Tigerman has produced the most self-consciously Jewish Holocaust museum of the past generation.

Gavriel Rosenfeld is associate professor of history at Fairfield University. He is currently writing a book on Jewish architecture and the memory of the Holocaust.