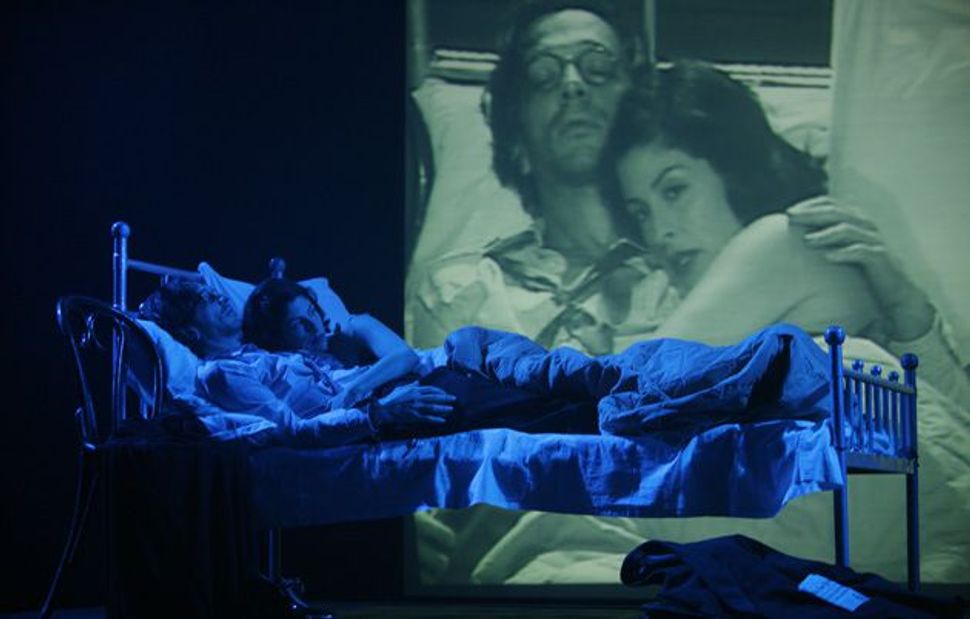 How does a Sephardic Jew whose father’s family has lived in Israel since the Spanish Inquisition come to translate and adapt the quintessentially Ashkenazic Isaac Bashevis Singer for the originally Russian-speaking Jaffa-based Gesher Theatre? According to Roee Chen, it’s done by pretending to be someone you aren’t. “I was 19 and needed a job,” Chen explained. “Someone told me that Gesher was looking for a speech coach. I didn’t know what that was, but I was arrogant, so I went there to tell them that I was the new speech coach.”

After sitting through a four-hour rehearsal, he was informed by one of the actors that the theater had already hired someone. Nonetheless, he waited for the theater’s director, Yevgeny Arye. When the now legendary director emerged, Chen began to speak to him in Russian, a language he had taught himself. Arye, apparently confused by Chen’s non-Russian appearance, replied in English. By the end of their conversation, Chen was hired.

Chen began working intensely with the actors on their Hebrew pronunciation — at the same time, he was teaching himself the job. “To speak as an actor,” he explained, “you have to analyze the text as if you’re not going to say it, and say it as if you’ve never analyzed it.” After six months, though, Chen quit. “When you’re in the theater, you have no connection to the outside world. It doesn’t matter if it’s day or night, winter or summer — the only thing you see is the stage lights. I was very young; I wanted to write, to have fun. I dreamed of going to Paris.” In order to leave the theater, he lied in the middle of rehearsal that he had been accepted to the Sorbonne. Everyone immediately started to celebrate and drink on his behalf. “I was so ashamed that I actually went to Paris,” Chen said. A month and a half later, he returned to Israel, penniless.

Rather than rejoin the theater, Chen went to work as an editor for Ma’ariv Publishing. “I was no more an editor than I was a speech coach,” he admitted. But soon, he began to not only edit books, but also publish his own translations from the Russian — including works by Daniil Kharms, Varlam Shalamov and Ivan Bunin, as well as Dostoevsky and Pushkin. He also published his first novel, “The Ink Horses” (Hakibbutz Hameuchad, 2005), which is set in Jerusalem and revolves around a commune of young people who live in a fantasy of re-created 18th-century balls — a gesture to classical Russian literature and the Bohemian circle of Russian-speaking Israeli poets, such as the late Anna Gorenko, who gathered in the abandoned Arabic village of Lifta on the edge of Jerusalem.

“When I was a teenager,” he explained, “Russian literature offered me a way to get out of the Israeli realism which is everywhere: television, film, radio, army, politics. At some point, I realized that I was reading about Russian heroes… from which about a million people had just come to Israel.” It was then that he started teaching himself Russian and, as he describes it, went out searching for these literary heroes among the Russian speakers surrounding him: “I was literally looking for Pechorin and Anna Karenina.” Chen never found his Russian heroes, but he did find Russian-speaking actors who would play them in the Gesher Theatre, to which he returned as dramaturge in 2007. Since returning, he has adapted Dostoevsky, Gogol, Chekhov, and others for the stage, but his first major collaboration with Arye was Singer’s “Enemies, a Love Story,” which appeared at the Gesher for the first time in March of this year.

“When I first came back, Arye called me from New York and asked me whether I’d ever read ‘Enemies,’” Chen recalled. He had read not only “Enemies,” but also most of Singer’s work. “I told Arye I was already writing.”

He got started immediately, and “worked like crazy,” but it took longer than a year to turn the book into a play. “There were a lot of problems,” Chen said. “First, the material — with its many locations and Singer’s special kind of looping action — works better as a film.” As an example, he mentions the success of Paul Mazursky’s 1989 film adaptation. Another issue was that the hero, Herman Broder, has a lot of interior monologues that, Chen says, can be reproduced in the theater but will always lose in competition with literature. Finally, he explains, Singer is a very strong author — perhaps stronger than his characters — and one has to, so to speak, turn down Singer’s volume to hear his characters.

Chen explains that there’s a moment in adapting when you understand that you have to take charge — to become a tunnel between the material and the audience, stay in the shadows but remain in complete control. He and Arye worked together, playing out the scenes in a mix of Hebrew, Russian and English, while Chen, who had previously taken Yiddish courses at Hebrew University, referred to Singer’s original on his own. Sections that he cut had to be reinvented and merged theatrically, and in order to tie together the work, he invented a few scenes of his own. When the text was complete, Arye brought in set designer Semyon Pastukh, who lives in New York and works in Russia, having started his career at Leningrad’s Academic Maly Drama Theatre and gone on to work with the Mariinsky Theatre in St. Petersburg and the Bolshoi Theatre in Moscow. Pastukh contributed to the play’s overall stage dynamic, Chen explained, “designing the stage like the subway, the tracks of which connect with the trains that carried Jews east during the Holocaust. There’s also an element of the stray Jew, and the constantly moving platform is like the ground literally always moving underneath his feet.”

The play opened, and already it has been nominated for the play of the year and best director categories of the Israel Theater Prize. Still, Chen says, he also has been blamed by several critics for integrating too many funny phrases and comedic punches. “In Israel, when you speak about the Holocaust or Yiddish culture, you have to be serious,” he said. “In a sense, they’re blaming me for the same thing that Singer was always blamed for — lowering the value of the Holocaust by combining it with comedy and sexual desire.”

Despite his own 10-year romance with the theater, Chen still has an ambivalent relationship with the artistic medium. “Who is this sloppy guard who let theater slip into the 21st century?” he asked. “I mean, grownups with costumes and makeup pretending to be someone else?” He believes that as long as today’s theater tries to compete with cinema, it will lose. “Theater will essentially always be about the actor and the word,” he said. “The theater that lasts uses technology, but doesn’t rely on it. It’s theater that knows what it is.”

David Stromberg is a Jerusalem-based writer and journalist. His fourth collection of cartoons, “Baddies,” is forthcoming from Melville House.