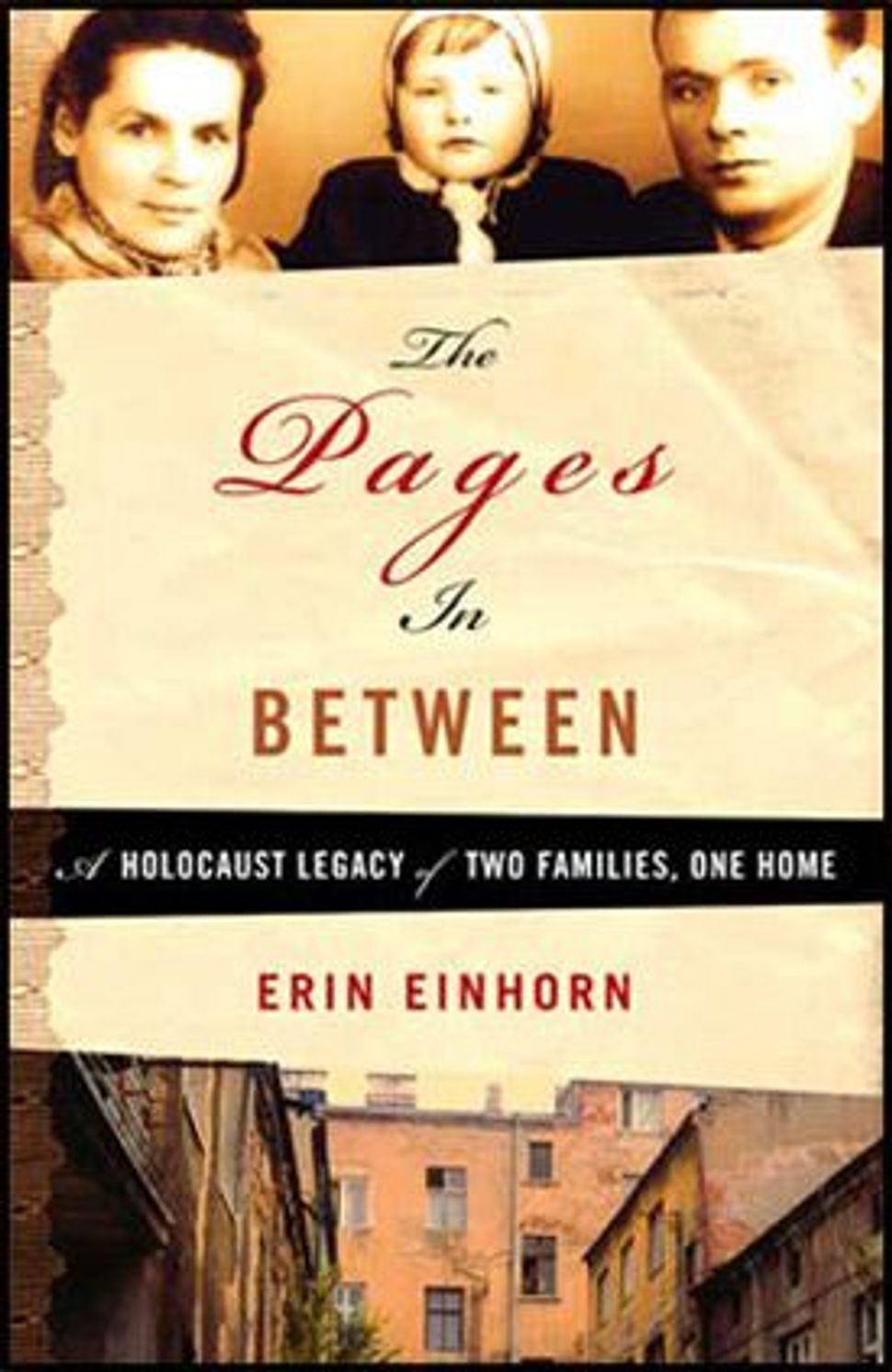 Holocaust Legacy Einhorn?s new memoir, ?The Pages In Between.? Image by Touchstone

Erin Einhorn’s family folklore reads like delectable fiction. Her grandfather leapt from a moving train bound for a concentration camp to save her mother — then a child — who was hidden by five people in three countries by the time she was 9. In 1945, Einhorn’s grandfather invited a Polish family, the Skowronkis, to live in his home in the town of Benzin, in exchange for hiding his daughter. Reunited after the war, father and daughter immigrated to America for a fresh start. 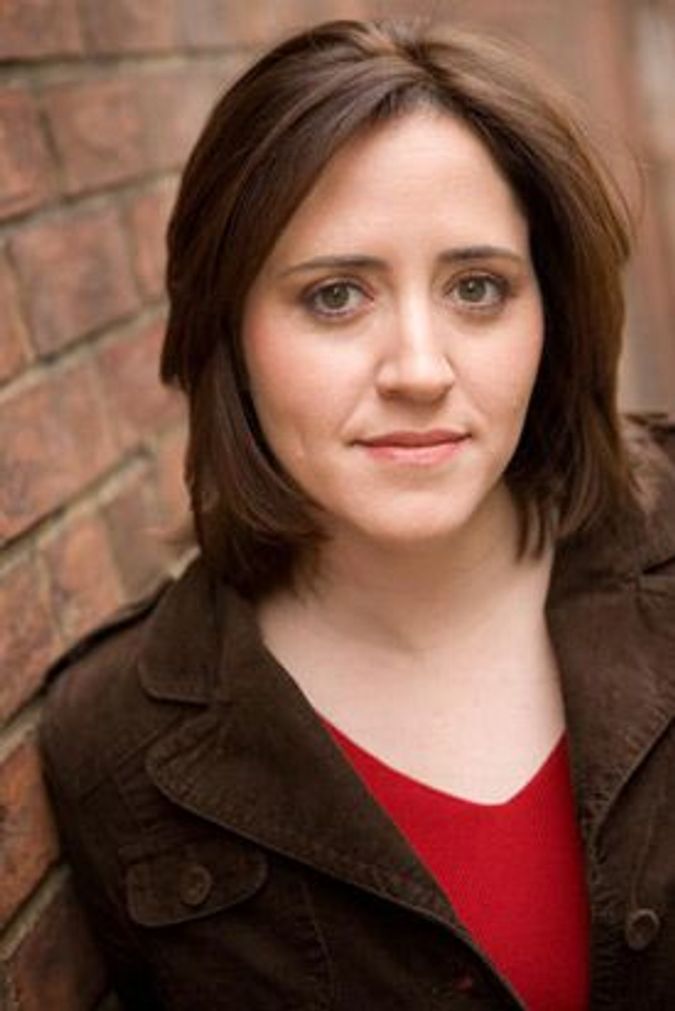 ?Two Families, One Home?: Einhorn, above, finds the Polish family who hid her mother during World War II still living in the same house. Image by courtesy of erin einhorn

Einhorn, now a reporter for the Daily News of New York, was fed this story growing up in Detroit, and said it lived inside her like an organ, however when she prodded her mother for more details, the narrative began to unravel. In 2001, 27-year-old Einhorn left her job, rented her house and broke up with her boyfriend to move to Poland for a year, where she would piece together her mother’s elusive childhood. As her mother grew sick with cancer, Einhorn went searching for the house and for the first family who saved her mother’s life. What she found was a family in debt and despair. Honorata Skowronska, who had taken in Einhorn’s mother, had died, but her children had become burdened by renters refusing to pay and by taxes on a house that, though their family had lived there for nearly 60 years, they could never own.

Einhorn’s new memoir, “The Pages In Between: A Holocaust Legacy of Two Families, One Home,” is an identity quest, a fact check of family folklore and a daughter’s charge to fix the problems of the past. Einhorn spoke recently with the Forward’s Allison Gaudet Yarrow in New York.

Allison Gaudet Yarrow: What made you initially want to help the Skowronskis get the house?

Erin Einhorn: Their mother saved my mother’s life. It wasn’t a question. If I could help them, of course, I would… I walked into the life of an elderly man who had once called my mother his sister. He hadn’t seen her in 56 years. He didn’t know if she was alive or dead until I walked through the door. He cried real tears. “How is she? How is she doing?” … I wasn’t going to tell him no, I won’t solve your problem.

Why didn’t your mother want to uncover her past the way that you did?

My mother had worked very hard to put that chapter of her life behind her. Her story is the immigrant story. Every time she moved somewhere she had to meet new friends, learn another language and try to fit in. By the time I was born, she finally fit in some place. She was this American mom, and she didn’t want to be that refugee kid anymore.

Your memoir is a fascinating mother-daughter story. 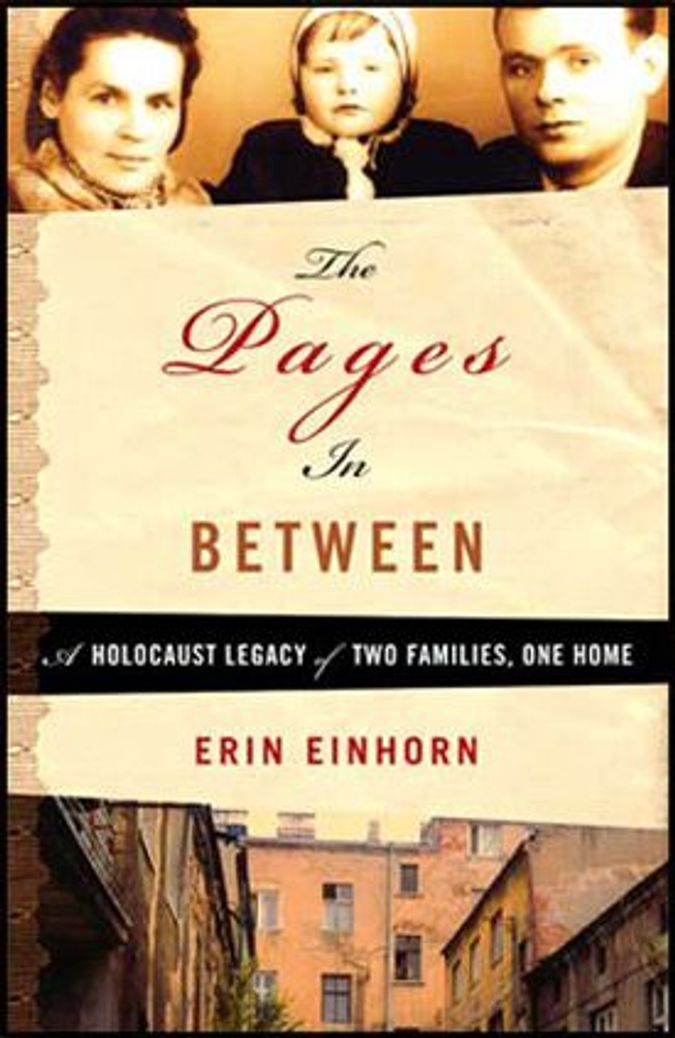 Holocaust Legacy Einhorn?s new memoir, ?The Pages In Between.? Image by Touchstone

I was a bratty kid and a bitchy teenager. Lots of teenage girls war with their mothers, and I can’t say it would be any different if I had a better understanding of who my mother was then. A lot of what I did was for her, even though she didn’t want it. It was for me to better appreciate her, and to make her more a part of my life.

In that way did you feel your mission was successful?

I don’t know. Just as I was coming to understand who my mother was, I lost her. I feel like I have a better understanding of my mother, but in her absence it’s hard to know for sure. I found documents that contradicted her only memory of her childhood. What if I could have taken them to her and asked her to reflect on them? Would she have remembered things differently?

What is your relationship with the Skowronskis now?

Initially, I was trying to help them by inheriting the house. If I could inherit the house, then I could help them with their difficult situation. That process took much longer than any of us anticipated. And three or four years later they filed a squatter’s claim. My lawyers said that if I supported [it], then it would go through. But I had relatives who didn’t want to support the squatter’s claim — cousins who are also heirs to this property. I testified in September of 2006 in the Polish court. I explained how my grandfather had invited them to live there. I don’t know if my testimony hurt or helped, but they lost their squatters claim.

And the status of the house?

When I started, the house was owned by my great-grandparents. I had to inherit the house from them, but first I had to prove them dead, which was complicated. I have proved them dead, and now they’re 140. They were only 130-something when I started. So now, two dead people own a house. And if some developer came into Benzin and wanted to revolutionize the place and create jobs, they would not be able to buy that house. They would not be able to invest in that community. Nobody can buy that house; nobody can sell that house.

Will you continue to go back every year?

Until I’m done, I suppose. I’m not really relishing the thought of it.

What’s your definition of “done”?

I wish I knew. I am a few documents shy of inheriting the house. But then what? Do I sell portions of it to reimburse me of all my costs? Probably not. I’m one of probably 50 heirs. The inheritance process has slowed down because two of my cousins have died since the process began.

What would you have done differently?

Cultural influences come into play when Americans discuss the Holocaust. You realized that a family member’s survivor story directly correlated to a scene from “Schindler’s List.” How did you reconcile false memories permeating your family history?

With the memory of traumatic events, it’s hard to remember what happened in the first place. Then, as you get older, things become shaped by conversations you’ve had, by movies you’ve seen. Among people who were lucky enough to survive the Holocaust, a lot of those stories sound rather similar. And then they’ve been portrayed in these movies that sear themselves in our brains.

And they become our collective memory of events

In my mother’s story, she would always tell the same few details. She was in hiding, she was in the orphanage, she was on the train to Sweden, she meets her foster family in Sweden, then she’s on the boat to America. When I tried to get my mother to slow down, she didn’t have a lot of the details in between. I discovered that my mother’s only memory of her childhood in Poland is provably false; I found documents that contradicted it. My grandfather always told a certain story about the way his wife died and I found people who remembered it differently. I don’t know what’s true and what’s false.

You spent years researching, writing and traveling for this story. When a Holocaust survivor admitted to falsifying his memoir recently, how did that make you feel?

This guy knew he was making it up … I’ve written a memoir about things that happened in 2001, and my memory has been influenced by the fact that I’ve written it. I can’t say that the writing process hasn’t altered my own memory. I was journaling all the time and I have a record about how I was feeling, but that’s the nature of memory, that it’s as much a living document as anything else.

Would you encourage people to go digging through their past?

I would. You never know what you’re going to find. If you’re so enamored of the family folklore that you don’t want any details of it challenged, then don’t. But I found that learning more of the truth helped me understand my own life better … I didn’t think I would find very much. But I traced my family history back to the early 19th century. My mother never knew what her mother looked like; her mother had been killed when she was a baby, and she spent her entire life wondering if her mother had red hair like she did, or black hair like me and the rest of my family. And I found a photograph of my grandmother in a book on a shelf in the [United States Holocaust Memorial Museum], and I was able to give that to my mother before she died — the most extraordinary gift that a daughter could give to her mother.

For more information about the book and the author’s upcoming events, visit erineinhorn.com.