Sol LeWitt: A Jewish Artist’s Leap Into the Unknown 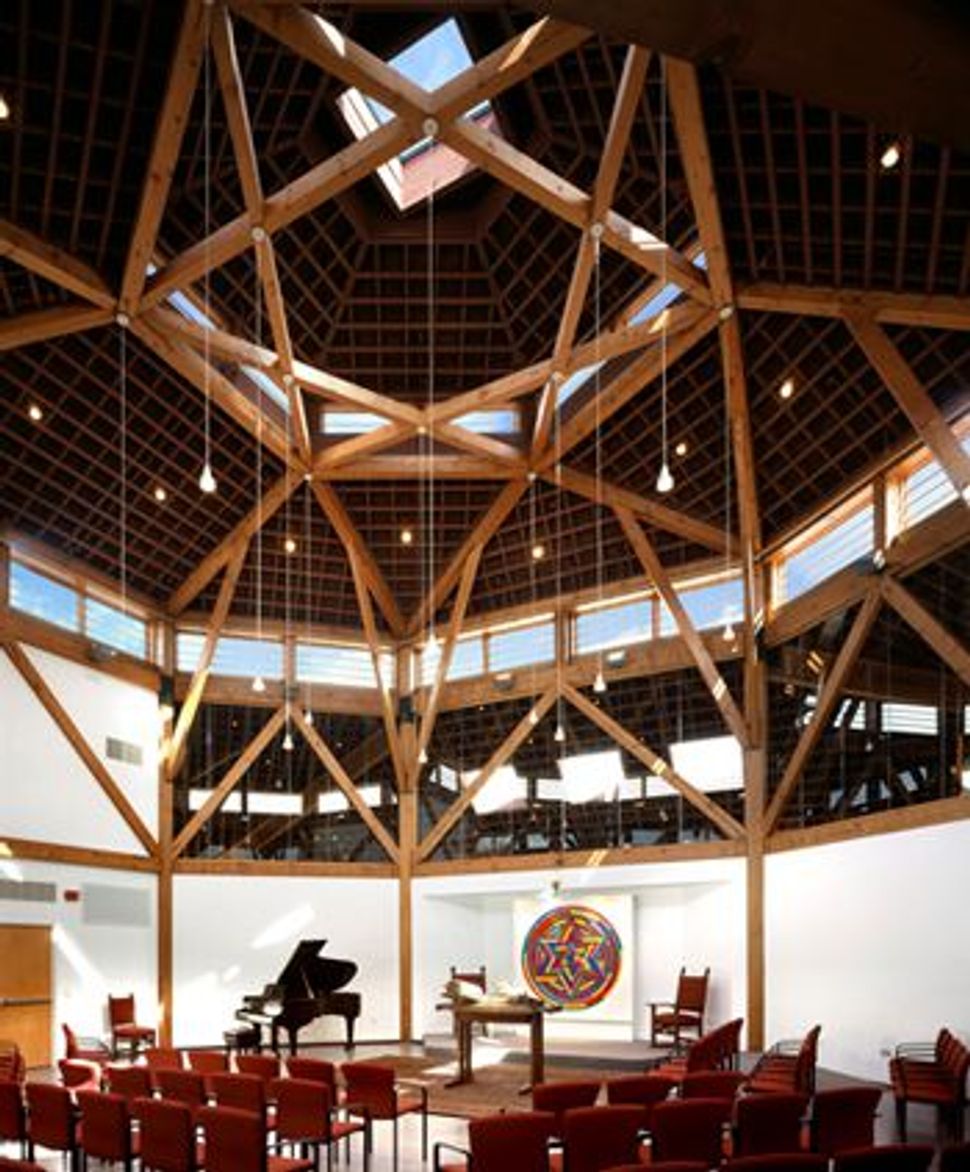 American Jewish artist Sol LeWitt, recognized as a pioneer in conceptual art and Minimalism, died of cancer two years ago, yet he is as present as ever on today’s museum scene. 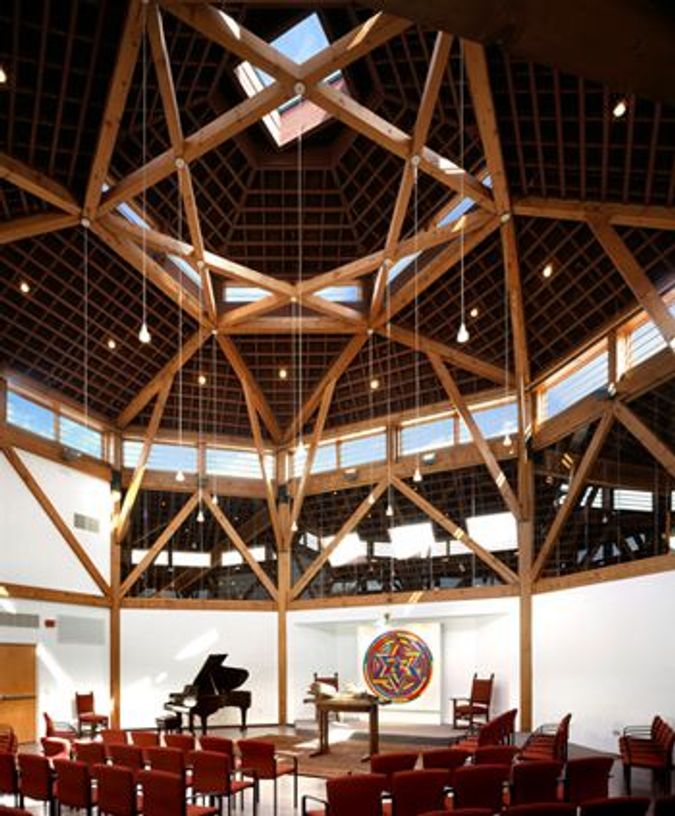 LeWitt opined in a 1967 issue of Artforum that the “idea or the concept is the most important aspect” of his art, and that when an artist “uses a conceptual form of art, all planning and decisions are made beforehand. The execution is a perfunctory affair.”

Until June 1, New York’s Museum of Modern Art is accordingly exhibiting LeWitt’s “Wall Drawing #260 (1975),” which consists of some 1,500 square feet of white lines on black walls, executed — as if interpreting a classical music score — by assistants who followed LeWitt’s carefully written directions.

This already massive MoMA artwork is dwarfed by the 100 large-scale drawings on display in North Adams, Mass. Unveiled last November at the Massachusetts Museum of Contemporary Art, and created by an army of 65 artists on three floors, Sol LeWitt: A Wall Drawing Retrospective will be on view until the year 2033.

As if this were not enough, Williams College Museum of Art just down the road in Williamstown, Mass., is hosting The ABCDs of Sol LeWitt until May 17. In addition to the artist’s drawings and sculptures this show exhibits items from Lewitt’s private art collection.

This flurry of posthumous activity raises the question: How well do we know the self-effacing artist who lurks rather modestly behind this spread of art? He was born, in 1928, Solomon LeWitt in Hartford, Conn., son of Russian Jewish emigrants (his mother was a nurse, and his father an inventive doctor who tinkered with fabricating newfangled surgical instruments). As a young painter, LeWitt eschewed the then-fashionable abstract expressionist style, and in 1969 he declared, in response to harsh critiques (he often said that he wrote “only in self-defense”):

Conceptual artists are mystics rather than rationalists. They leap to conclusions that logic cannot reach…. Ideas can be works of art; they are in a chain of development that may eventually find some form. All ideas need not be made physical.

Yet some critics have been slow to accept the mystical, indeed Jewish mystical, element in Lewitt’s conceptual art. In 2002, art critic Max Kozloff complained to The New York Times about LeWitt: “Most movements within modernist art required that you give up your ethnic credentials and adopt a utopian platform.” Did LeWitt truly abandon his “ethnic credentials”?

Evidence would suggest otherwise. In 1989, LeWitt’s “Black Form — Dedicated to the Missing Jews,” a wall of concrete blocks, was installed in front of the ornate Town Hall in Altona, Germany. LeWitt’s wall expressed the artist’s feelings upon visiting Germany in the 1980s: “Being Jewish,” he later recalled in “Sol LeWitt: A Retrospective” (Yale University Press, 2000), “I noticed the absence of Jewish artists and curators, Jewish bakers and candlestick makers.”

“Black Form” had first been installed in Münster, Germany, in 1987, where, as recounted in James E. Young’s cogent “The Texture of Memory: Holocaust Memorials and Meaning” (Yale University Press, 1994), it offended so many locals, who claimed that it interfered with parking and clashed visually with a pretty urban square, that it was demolished. Eight months later, as part of commemorations surrounding the anniversary of Kristallnacht, the city council asked LeWitt for another sculpture, and he agreed to reconstruct the destroyed work on a different site — where it still stands, despite intermittent neglect.

The strongest evidence of LeWitt’s abiding ethnic credentials remains at Congregation Beth Shalom Rodfe Zedek in Chester Conn., where he lived, worshipped and helped design the new synagogue building, including exuberant wooden roof beams alluding to those lost in Poland. When LeWitt died, the synagogue’s newsletter, The Whole Megillah, featured an endearing reminiscence by a fellow congregant, Lary Bloom, about how LeWitt acted:

[B]y almost every measure possible, [Sol] taught us about the tenets of Judaism…. Though he often came to morning minyan, he was not known to debate the fine points of Leviticus. What he did, however, was demonstrate over and over again through his actions what our sages have tried to teach us.

LeWitt, according to Bloom, communicated an “understanding that we are put on this earth for a purpose and it is our job to do the right thing.” Indeed, in a wide-ranging 1974 interview for Archives of American Art, LeWitt confided, “I think that esthetics and ethics are really very much the same kind of thing.”

It is important to stress, as The Daily Telegraph did in 1993, that “far from being a chilly philosopher-artist, LeWitt, though demanding, is full of sensuality and playfulness.” This is because his works, whether at the Storm King Art Center in Mountainville, N.Y., or the Federal Building & Courthouse in Springfield, Mass., are gratifying to move around, like any valid sculpture.

These sculptures — or “structures,” as LeWitt preferred to call them — express emotions that develop as the viewer’s position changes, adding an essential element of motion to the works themselves. LeWitt often acknowledged the influence of 19th-century Englishman Eadweard J. Muybridge’s photographs of graduated movement, which he praised for “seeing things from three different angles, as they emerged and changed…. A kind of philosophical realism.”

As if predicting the artworks currently on view at MoMA and Mass MoCA, LeWitt stated that the artists who followed his plans for large-scale drawings produced a result akin to a “musical performance. Every time you hear the same Bach piano or harpsichord thing, it’s different, even with the same person…. Whoever does it will leave their mark on it. In a way it’s good that the draftsman has a part in it, and it’s not just the artist doing it. It’s a collaboration.” LeWitt believed firmly that his role was to “reach into some kind of unknown or some irrational…. Really good art has a kind of extra leap into the unknown.”

Clearly, to take that leap into the unknown, the art lover must trust in the quality not just of the idea, but also of the mind that conceived it. By all indications, LeWitt has always been, and continues to be, worthy of our trust. Such was the conclusion of a plethora of artists, from German-born sculptor Jewish Eva Hesse (1936–1970) to conceptual artist Adrian Piper (born 1948), who posted on her Web site (www.adrianpiper.com/art/sol.shtml) what she terms a “celebration of all the known permutations of Solhood.” Recalling visits to LeWitt’s studio on Hester Street, on Manhattan’s Lower East Side, Piper stated, “I saw that this was a man who genuinely liked and respected women.”

Indeed, being repelled by the ambient machismo of New York School abstract expressionists may be one thing that caused LeWitt to embrace the artistic approaches he eventually chose. LeWitt told an interviewer for Archives of American Art that the abstract expressionists “had a way of living and a way of talking and a way of arguing and a way of doing everything that was just so completely different from me that I just could never get with it…. Most of them were so arrogant and loud.” By eschewing arrogance and loudness, LeWitt produced a message that, for all its quietness, is already proving to be enduring.

Sol LeWitt: A Jewish Artist’s Leap Into the Unknown