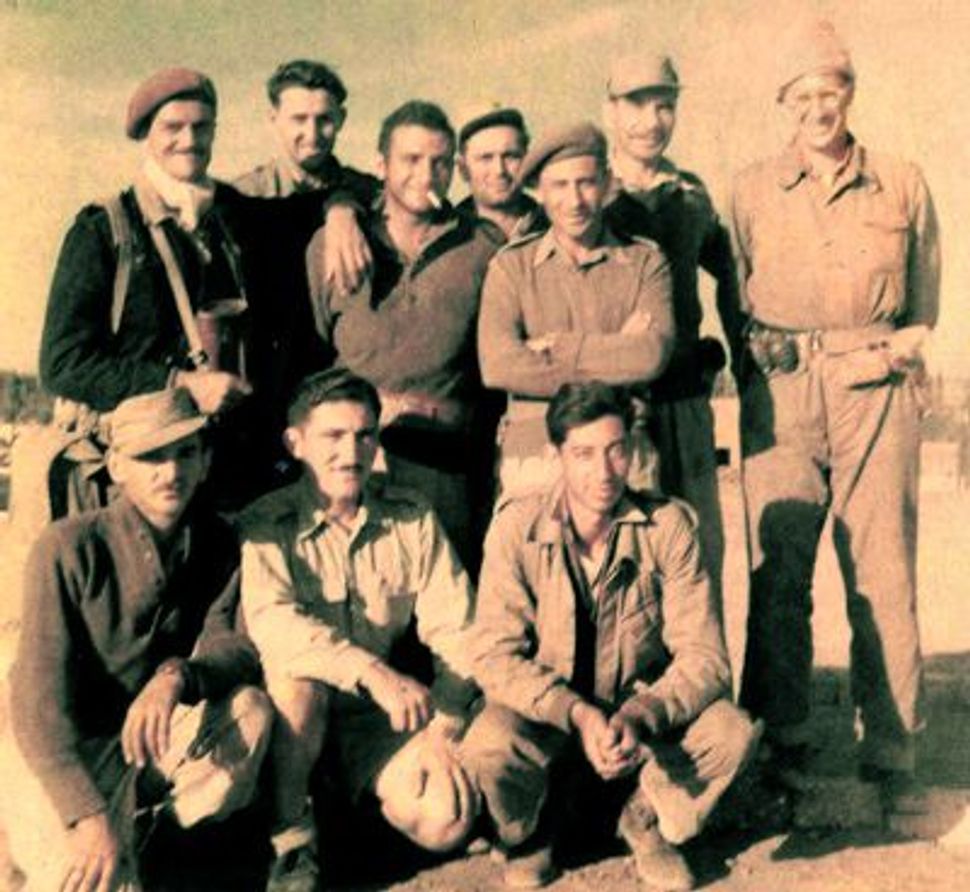 Your Country Is Safe With Us!: Officers of the 72nd Battalion includ-ing (far right) Norm Schutzman and (far left) David Apple, a non-Jewish British soldier who trained the first paratrooper battalion in Israel. Image by COURTESY OF NORMAN SCHUTZMAN

Prior to the arrival of my father and the first wave of Machalniks in May 1948, the fledgling Israeli army had taken huge losses. These losses weren’t simply because the soldiers were heavily outnumbered, but because the Israeli army had not yet become a unit: It was still a disorganized patchwork quilt of antagonistic freedom fighters (including the Irgun, led by Menachem Begin — the group responsible for the rescue of political prisoners from the British prison in Acre a year earlier), World War II vets and concentration camp survivors, all waiting for weapons and equipment to bypass the blockade. 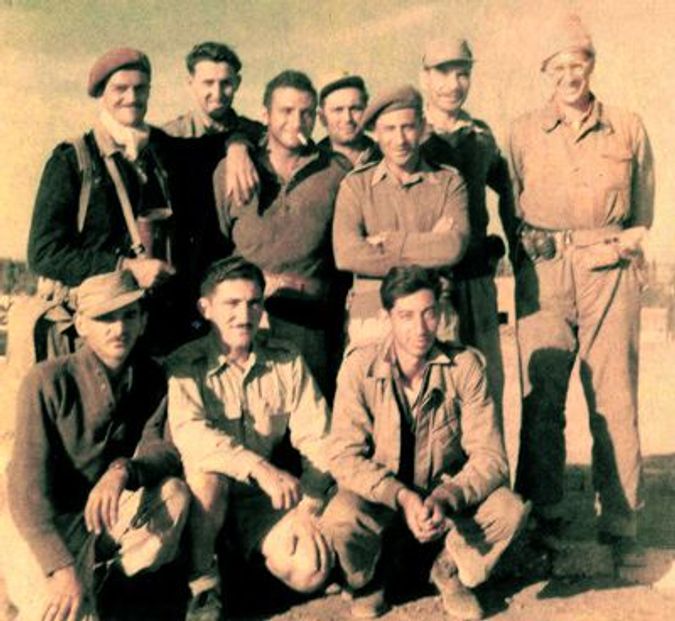 Your Country Is Safe With Us!: Officers of the 72nd Battalion includ-ing (far right) Norm Schutzman and (far left) David Apple, a non-Jewish British soldier who trained the first paratrooper battalion in Israel. Image by COURTESY OF NORMAN SCHUTZMAN

One Machalnik put it bluntly:

“Had I arrived on May 18 as originally intended, I would have probably died from some slip-up in battle, maybe friendly fire… let me give you an illustration: An Egyptian warship came to Tel Aviv. They thought it might land troops, so they sent out a Tiger Moth; that was the little two-seater plane they’d gotten. They of course threw down bombs on the Egyptian warship, which went away. But the bombs blew up their own Tiger Moth, and they both died… that sort of shock, disorganization and inability to respond was characteristic to those days.”

The most famous and tragic example of this lack of organization involved what was to become my father’s battalion — the 72nd Infantry Battalion, 7th Brigade — at the Battle of Latrun.

In May 1948, even under the partition, Jerusalem was an international city inside the Arab state, but because the Old City consisted of both Arab and Jewish residents, it was defended by the Haganah. Jerusalem was attacked and captured by a Jordanian legion, but the Israeli army intervened before they could capture the New City. East Jerusalem was besieged, and the only way to bring food, water and other supplies into Jerusalem was via a road that ran through the Arab village of Latrun. The British decided to defend this road to Jerusalem in Latrun with a Tegart fortress — essentially a large, well-fortified building with a dual purpose: to jail captured Jewish soldiers and to prevent access to Jerusalem.

This put the Israeli army in a very difficult position: Either break through at Latrun to end the siege, or just let Jerusalem go. Stretched thin, and on the defensive — especially on the Egyptian front in the South — the Israeli army was nevertheless determined not to abandon Jerusalem. As there weren’t enough troops to take on the Jordanian legion entrenched in Latrun, a decision was made to use Holocaust survivors, also known as Displaced Persons (DPs), who had recently arrived, give them a day’s training, put them in civilian buses boarded on the front in order to withstand machine-gun fire and drive them up to Latrun for a full-fledged attack. The attack ended disastrously as the DPs were mown down by machine guns the British had provided to the Jordanian soldiers, and the battalion was decimated.

In a bitter irony, after five failed attacks, some soldiers discovered a goat path that bypassed Latrun. That path, which became known as the Burma Road, would in turn save Jerusalem.

A Machalnik who arrived a few weeks before my father told me that the events at Latrun inspired new Hebrew words to a Russian song:

It wasn’t until around July 1948 that a degree of stability, organization and training began to take hold in the Israeli army. This was due, in part, to the infusion of new equipment and the first wave of Jewish volunteers from around the world, like my father. In May 1948, three weeks prior to my father’s arrival, Norman Schutzman, his soon-to-be commanding officer, landed in a plane that had taken off from Greece. Schutzman told me that when he first saw the bay at Haifa, and Mount Carmel rising behind it, “there were no words I could find to describe how I felt. I was coming to the land that was promised by God to my people 3,500 years ago.”

Schutzman had come to operate and train others to use anti-aircraft guns but they had not yet arrived from Czechoslovakia, and there was no information as to when they would. Schutzman was given a choice: Wait around for the guns to come, or join the infantry. Schutzman found this “a silly question,” so he was officially inducted into the Israeli army as an infantry captain and ordered to report to the demoralized 72nd Infantry Battalion, now stationed north of Haifa. On his first day in the army, Schutzman met the battalion commander, Jack Lichtenstein, an American who had made aliyah years earlier. Lichtenstein had just received orders from brigade headquarters; the 79th Tank Battalion was planning to attack Nazareth, the largest Arab town in the Galilee.

Lichtenstein, along with his companies, was ordered to dig in east of Nazareth to stop a potential counterattack. He assigned Schutzman to lead the English-speaking Company B of the 72nd. Schutzman received a shock when his new company lined up before him; presented with only 60 men, his sum total of arms numbered 13 rifles, a few pistols and a handful of grenades. Luckily, the ill-equipped and undermanned 72nd avoided any losses as the 79th Tank Battalion took Nazareth that night without a shot being fired.

After his arrival from Marseilles two weeks later, my father was processed at Tel Letvinsky and was driven 20 miles to where he met Schutzman and the rest of Company B. On the 1948–1949 roster for Schutzman’s Company B was a motley crew of 118 men from nine countries. Nearly half were from the United Kingdom, with significant numbers from the United States, South Africa and Canada; perhaps more surprising were the representatives from Kenya and India, Costa Rica, Holland and Norway. However motley, the men of Company B were united in elation a week later, when crates of rifles and two machine guns arrived from Czechoslovakia. Not only was the battalion now at full strength, but for the first time, each man had a weapon.

The other companies of the 72nd Infantry Brigade were organized by language: Company A comprised Polish Jews who did not speak English, Company D comprised French-speaking Moroccans and Company C comprised Yiddish, Polish and Russian speakers who were, ironically, anti-Haganah, and anti-Ben-Gurion.

“Their anger at Ben-Gurion stemmed from the story of the Altalena, an Irgun ship on which the men of Company C were sent into the country along with smuggled armaments. Originally, the Altalena was supposed to dock mid-May, but instead it arrived mid-June. While the Altalena had been sailing toward Palestine, a month-long truce had been called for June. Menachem Begin took the view that, since the Arab and Israeli forces had been violating the truce, the Irgun would bring the ship into Israel surreptitiously. Ben-Gurion, however, as commander-in-chief of the truce-abiding army of the state of Israel, ordered it sunk. When the men on the Altalena finally got off the boat, they were enraged at the Israeli army for shooting at them. A Machalnik told me that the men of Company C would march and sing the following in Russian all day long:

In September 1948, during another U.N.-imposed truce between the Arabs and Jews, an extremist Arab group was using the large hill at Tamra to fire on Jews: Schutzman was given the order to capture it. On September 6 — the day he received his orders — Schutzman drove to the hill with his platoon commanders to set up a battle plan. He returned later that night with my father and the rest of Company B, in buses that let the men out a mile from the hill. Schutzman’s plan was for his company to climb slowly up the hill in the cover of night, with one platoon in reserve behind them. Company B proceeded to make its way toward the top and dig in. At daybreak, on September 7, the men of Company B began to take mortar fire from the Arab forces above. The mortar fire soon became increasingly heavy, raining down on my father and on Schutzman’s men. Schutzman called for the reserve platoon to come up. The platoon commander below had ordered his men to fix bayonets to their weapons, and the platoon, with only three deaths, swept through the Arab forces on the hilltop, taking the hill by dawn. This bloody charge was the only bayonet fight in Israel’s entire history. 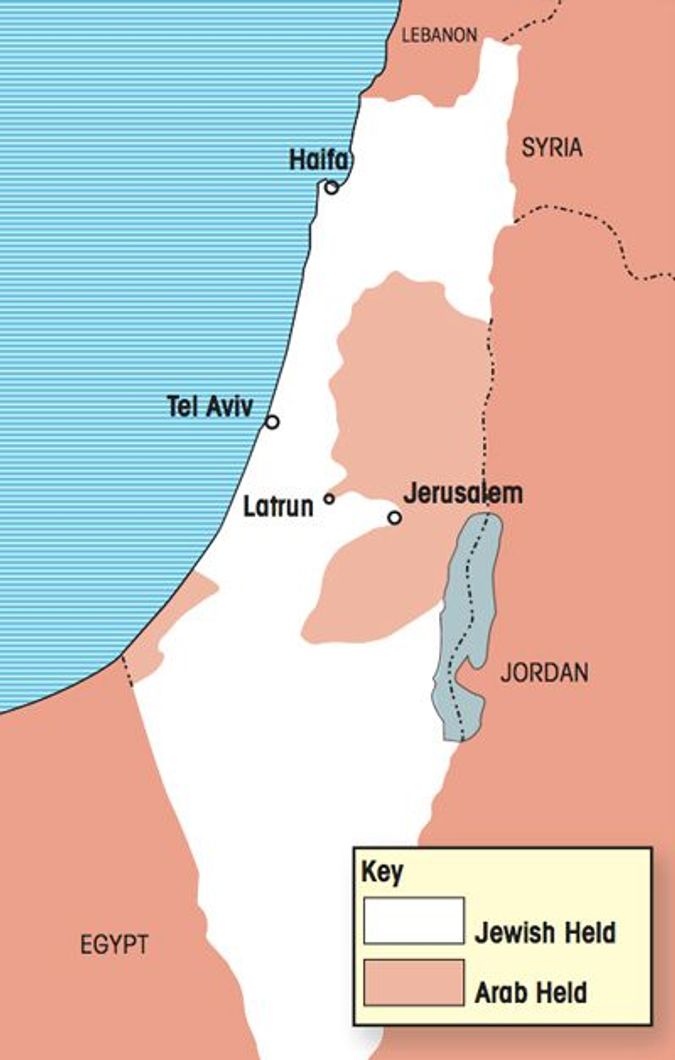 Divisions, divisions: UN maps show the narrow corridor between Tel Aviv, Latrun and Jerusalem. Image by BASED ON UN MAP OF THE ARMISTICE LINES OF 1949, NO 547, 10/1/53

By the time I knew my father, it was common knowledge in the family that he had a strange fear of his children’s blood; he’d often pass out when he would see us bleed. No one knew why he had this reaction, but it now seems linked to that intensely bloody morning on the hill at Tamra. Schutzman recalls the effect of Tamra on one of his men, an 18-year-old with no prior military experience who, like my father, was from New York. Throughout training, this young man would constantly boast to everyone around, “I can’t wait to get myself an Arab.” That morning at Tamra, after the first shots rang out, this same young soldier fled straight back down the hill. The trauma of battle left the young man with severe psychological problems, and two months later he was sent back home.

The day after taking Tamra, Schutzman recalled reading a newspaper; on the front page, there was a small paragraph that stated there had been an “engagement” at Tamra and that the Jewish army now controlled the hill. Schutzman said, “Since then, whenever I read in a paper or a book about any action, battle or accident, I can appreciate the difference between reading about it and being there.” Schutzman’s observation had a profound effect on me. Here I am, attempting to put myself in the shoes of my father, a man I love and miss deeply. And as much research as I do, or as many of his peers as I speak to, I will never truly know what he felt and experienced as he and his company continued on to their next “engagement.”

Jonathan Kesselman is a screenwriter and film director (“The Hebrew Hammer”), and an adjunct professor at Yale University.