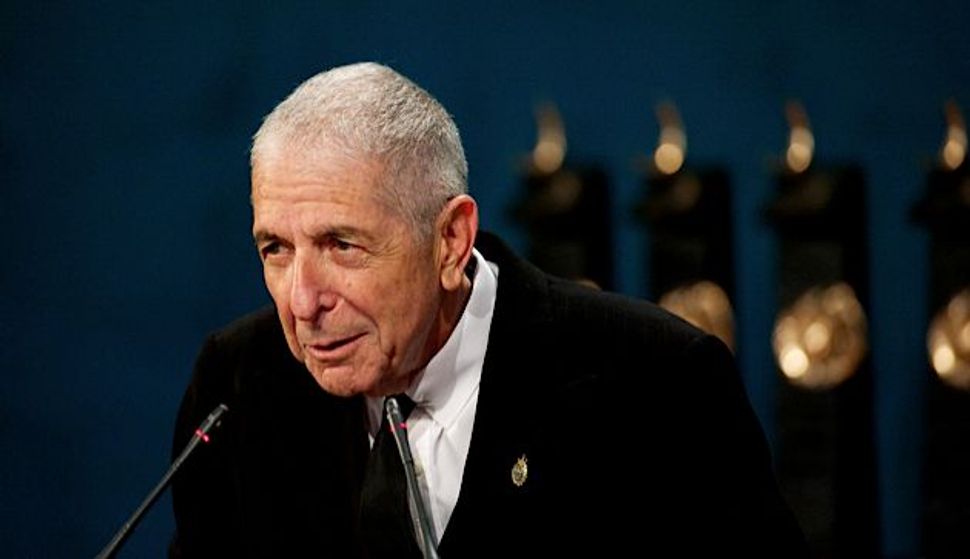 Leonard Cohen has long been a poet of the sacred and profane. Like his fellow Jewish pop troubadours, Bob Dylan and Allen Ginsberg, Cohen has, for 50 years now, written and sung about love, God, temptation and sex — though arguably to greater extremes and with a more intellectual bent than his better-known contemporaries. Beginning in the 1960s, Cohen’s literary albums and musical poetry conveyed a uniquely intelligent blend of tormented love and prophetic fire; though never as famous as Dylan, or Paul Simon, or other guitar-slinging poets, he has been an icon for decades. Yet, in the 1990s Cohen became a Zen monk, renouncing worldly pleasures, donning black robes and taking on the name Jikan, which means “Silent One.”

“Book of Longing,” Cohen’s first new book of poems in more than 20 years, is a synthesis of the worldly and the other-worldly. In it, Cohen has crafted a poetic religion of whiskey, women and cigarettes, both a typically Zen Buddhist repudiation of all forms of religious piety and one framed by the categories of Jewish sensibility. It is antinomian and reverent, deeply sexual and deeply spiritual. In “Other Writers,” Cohen declares:

Steve Sanfield is a great haiku master
[…]
he writes about the small things>which stand for all things.
Kyozan Joshu Roshi,
[…]
addresses the simultaneous
expansion and contraction
of the cosmos.
I go on and on
about a noble young woman
who unfastened her jeans
in the front of my jeep
[…]
I’ve got to tell you, friends,
I prefer my stuff to theirs.

There is precedent for Cohen’s Zen impiety: Ikkyu, the 14th-century master of Japanese poetry who scandalized his contemporaries (and, likely, ours ) by cavorting with prostitutes, getting drunk and railing against the institutional hierarchy of Zen Buddhism — all as a fully enlightened Zen teacher. “Don’t hesitate to get laid — that’s wisdom,” he wrote in one short poem (translated here by Stephen Berg). “Sitting around chanting? What crap.” There are fewer of these “holy sinners” in the Jewish tradition, but arguably Ginsberg is among them, and perhaps Philip Roth, too, in his own way.

Cohen’s is the voice of the resolute spiritual traveler who has come to embrace worldly pleasures as objects of devotion. Now over 70, and writing often about his mortality, Cohen remains resolutely libidinous, and more convinced than ever of the irreducible holiness of what the pious condemn as profane. He has moments of enlightenment with his roshi — brought on by drinking $300 scotch. He says to his diary, “I mean no disrespect/But you are more sublime/Than any Sacred Text.” And Cohen’s signature symbol, rendered in a woodcut that appears throughout the illustrated “Book of Longing” as well as on the cover of his most recent album, looks like a Jewish star but is actually two interlocked hearts.

“I am old but I have no regrets/not one/even though I am angry and alone/and filled with fear and desire,” Cohen writes in “On the Path.” To some, this may not seem like spirituality, which to both deniers and believers is often said to be about leaving behind anger and fear and dwelling in peace and joy.

But there are two kinds of spiritual teachers in the world: those who claim to know the answers, and those who have only questions. The first fill the self-help shelves, and the inspirational section of the bookstore; they deal in facile answers, fantasies, simplicity and certainty. The second are the poets, the storytellers and those precious few mystics who know that the simple banalities of conventional morality, be it Eastern or Western, are not only reductive and clichéd; they are actively destructive to an authentic spiritual journey. They truck not in answers but in questions, not in fantasies but in realities — in subtlety, not simplicity, and in uncompromising, honest uncertainty.

Cohen’s voice is of the latter kind, of course, and it is one that experienced spiritual practitioners — by which I mean not those who dabble on weekends in a few Carlebach tunes, but those who have devoted weeks, months, years to serious introspection and contemplative work — will instantly recognize as one of their own. “Book of Longing” has the occasional didactic poem, but many more recognize the travails of the spiritual path. In “The Lovesick Monk,” for example, Cohen complains, “I shaved my head/I put on robes/I sleep in the corner of a cabin/sixty-five hundred feet up a mountain/It’s dismal here/The only thing I don’t need/is a comb.” One of his many self-portraits includes the line “We are not convinced there has been any improvement.” And in the short poem “Fun,” he acknowledges that grace is unpredictable:

Cohen’s Jewishness is more present in these religious poems than in any of his previous work; many of the poems have Jewish themes, as well as Jewish terms such as “G-d.” Yet Cohen’s remains a delightfully heretical Jewishness (he also sometimes writes “sex” as “s-x”). “By the Rivers Dark,” for example, echoes Psalm 137: “By the rivers dark /I wandered on/I lived my life/in Babylon.” But Cohen does not yearn for the pieties of Jerusalem: On the contrary, he writes, “be the truth unsaid/and the blessing gone/if I forget my Babylon.” Cohen’s hero is King David, not the idealized one of simple myth but the complex, flawed, and dynamically sexual man of the Bible: “the king who sent Uriah to his death so that could marry his wife, Bathsheba”; the old man betrayed by lust; the poet and the loner. That David, the singing, sexual one, is the hero of Cohen’s 1984 song “Hallelujah,” and his poetry, as described by Cohen (blending the stories of David and Samson) is likewise derived from what some would call sin: “Her beauty and the moonlight overthrew you/She tied you to her kitchen chair/She broke your throne and she cut your hair/And from your lips she drew the Hallelujah.”

This is neither cynicism nor the lazy secularism of those who mask their insecurity with rationale. It is experience. What the “crazy wisdom” poets like Ikkyu and Cohen recognize, and what moralizers never do, is that ultimately, the paramount task of the spiritual seeker is to give up any notion of knowing the right answer, or even the right course of action. Ideals of justice and compassion remain, of course; but the pretense of piety is only an obstruction to the openness and wisdom that are the hallmarks of the liberated mind. The poet returns to where he began: knowing that we are flawed, powerful animals, even as he also knows the ineffable, the transcendent. The mystic’s embrace of the worldly is not the same as the materialist’s rejection of the spiritual. Cohen’s verse — some rhyming, some blank, some in the form of prose-poem — often evokes the numinous. Consider these lines from “Love Itself”:

All busy in the sunlight The flecks did float and dance, And I was tumbled up with them In formless circumstance.

Then I came back from where I’d been My room, it looked the same —
But there was nothing left between The Nameless and the Name.

Ultimately, these late poems of Leonard Cohen are, like the story of David, records of a man with equal lusts for women and God (more so than his recent albums, which have been compromised by slick, AOR-style arrangements that often undermine Cohen’s own dark presence), and who, perhaps unlike his biblical precursor, has come to affirm the sacred and the profane, the spiritual and the sensual. Like those of the great Jewish heretic Jacob Frank, Cohen’s revelations are occasioned by beautiful women — and sometimes consist of them. Cohen may seem impious, but what’s the alternative? After all, it’s precisely those preachers who are the most pious and puritanical regarding sexuality who have skeletons, and sexualities, in the closet.

Speaking as a religious-sensual poet myself, I’ll take one Leonard Cohen over a hundred finger-wagging traditional rabbis, beatifically smiling New Agers and hackneyed self-help writers — not to mention cowardly hipster-cynics and their ilk. For those of us with more mature approaches to spirituality than the various alternatives they offer — pietism, denial, ignorance or reductivism — it’s deeply inspiring (and not in the “inspirational” sense of the word) to imagine the septuagenarian Cohen, gravel-voiced and stubble-faced, adding his “Book of Longing” to the library of spiritual verse. In “Opened My Eyes,” the poet prays:

Jay Michaelson’s first book of poetry, “Another Word for Sky,” will be published this summer by Lethe Press.