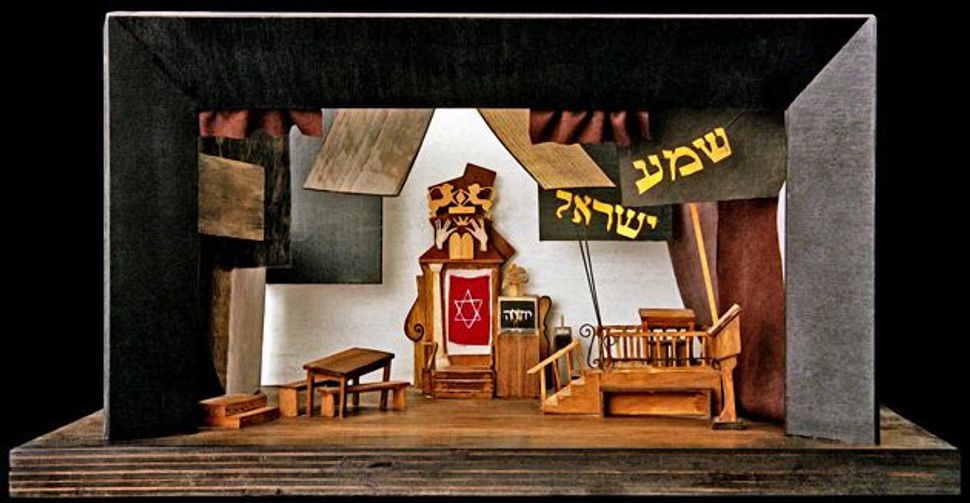 Scene Is Finally Set: Eighty years after its arrival was heralded, American audiences are able to see the work of the geniuses of Russian-Jewish theater. Image by Estate of Natan Altman/RAO, Moscow/VAGA, New York

In January 1929, Theater Arts Monthly announced that the Moscow State Yiddish Theater would arrive that month in New York with six plays, including I.L. Peretz’s “At Night in the Old Marketplace” and Sholom Aleichem’s “200,000.” The troupe never arrived that month, nor did it arrive before 1949, when the Kremlin, which had also prohibited its American tour, dissolved it. Eighty years later, some of Soviet Jewish theater’s most innovative works have finally arrived, and they can be seen in San Francisco’s Contemporary Jewish Museum, where an exhibit called Chagall and the Artists of the Russian Jewish Theater, 1919–1949 displays a superb collection of more than 200 costume sketches, set designs, murals, theater posters, photographs and film excerpts of Soviet Yiddish and Hebrew stage performances created during the 30-year period.

After the Revolution of 1917, the Soviet state decided to encourage ethnic cultures that had suffered under the tsar; and for a time, Lenin’s government supported two of the 20th century’s most innovative Jewish theaters. Benefiting from that temporary benevolence, the Moscow State Yiddish Theater (also known by its acronym, GOSET) created outstanding Yiddish stage productions involving not only Chagall, but also many other gifted visual artists whose costume and set designs can be seen in the current show. Organized by New York’s Jewish Museum, where it premiered last fall, the exhibit also features renderings and production photographs of the Soviet Hebrew-speaking theater Habima, which left Moscow to tour in 1926, stayed abroad and eventually became Israel’s national theater.

Marc Chagall’s beautiful theater murals can be seen in the exhibit, their tableaux replete with fiddlers, acrobats (one wearing tefillin), a green cow, chickens, goats and actors. (The artist’s vision of folkloric Jewish life went beyond realism into a dream world where violins and cows could be green.) The murals have toured American museums previously, but this time they surround spectators in a reconstruction of “Chagall’s Box,” the tiny Moscow theater space for which they were first created in 1921. One of several acknowledged master artists in Russian-Jewish theater, Chagall can be appreciated here in a larger cultural and social context, as the show connects him to other avant-garde artists who developed adventurous and spellbinding stage works in Moscow after 1919. Chagall left Russia for Paris in 1922. His creative comrades who stayed longer in the Soviet Union also deserve recognition, and they receive it, thanks to the Jewish Museum’s senior curator, Susan Goodman, who assembled the extraordinary exhibit with her staff.

Before Chagall left Moscow, he inspired two other resident geniuses at GOSET, stage director Alexander Granovsky and actor Solomon Mikhoels (who became artistic director of GOSET after his predecessor, Granovsky, left in 1928). Responding to Chagall’s carnivalesque and dreamlike images, Mikhoels and Granovsky found counterparts in acting that were by turns highly stylized, tragicomic and poetic.

Glimpses of the new acting style can be seen in still photographs and rare short films of stage performances. In a 1921 silent film sequence never released in a full-length feature, Mikhoels portrays one of Sholom Aleichem’s characters, bookseller Reb Alter, struggling with a saucer of hot tea. Like a Yiddish Charlie Chaplin in a worker’s cap and rimless glasses, Mikhoels tentatively sips the steaming tea, blows on his fingers to cool them, pauses to eat a sugar cube, then completely abandons the troublesome saucer for a schnapps. This great actor doesn’t have to announce that life is hard; he can find tsoris in a dish of tea. Other rare film sequences in the exhibit — including five minutes of GOSET’s “King Lear,” and a brief, incisive documentary by Sam Ball — suggest that Mikhoels merits billing equal to Chagall’s. His highly expressive physical acting, along with the scenic spectacle, allowed even visitors who spoke no Yiddish to enjoy GOSET plays.

Soviet officials who funded the Jewish theater expected its plays to show how shtetl life and religious orthodoxy were obsolete in the age of revolution. Ironically, though, innovative Jewish theater designers gave the world of Judaism before the Revolution a new life in modernist art. Robert Falk’s phantasmagoric sketches for “At Night in the Old Marketplace,” and Ignaty Nivinsky’s frog, fish and bird costumes for “The Golem,” transform Jewish folklore and shtetl life into Expressionist nightmares. In other productions, constructivist stage sets consisting of ladders and scaffolds suggested that all of Russia was under construction. Off-center and asymmetrical scenery in the design for Nathan Altman’s “The Dybbuk” literally gave a new slant to rooms, tables, chairs and altars, as if the world had lost its balance (which, perhaps, it had after the October Revolution).

Besides finding inspiration in Chagall’s murals, Granovsky may have derived some directorial concepts from that secular Jew, Karl Marx. Staging Sholom Aleichem’s Yiddish comedy about a tailor who wins 200,000 rubles in a lottery, he choreographed movement so that (as the exhibition catalog notes) “workers floated on ladders above the obese bourgeoisie,” and a matchmaker arrived by parachute. Different heights and body weights signified different social classes that were at war. The parachuting matchmaker was a luftmensch, a man who lived on air. Such sociological readings of character might have pleased the theater’s funders, the bursars of Lenin and Stalin.

As Stalin’s regime insistently promoted socialist realism in the arts, experimental theater became an endangered species. Habima’s “biblical theater” survived because it left the USSR permanently in 1926. In Moscow, GOSET continued to present notable Yiddish plays late into the 1940s, including versions of Sholom Aleichem’s “Tevye the Dairyman” and Shakespeare’s “King Lear.” One exhibit caption asserts that Mikhoels’s 1935 depiction of Lear as “a persecutor of his supporters” was “a critical portrait of Stalin.” But if Mikhoels was critical of Stalin, he also was resourceful enough to survive state repression and purges until January 1948, when government agents murdered him. In 1949, his theater was liquidated. The gray wig and gilded royal robe that Mikhoels wore onstage as King Lear now drape a mannequin in the museum exhibit, and survive as haunting relics of the performance of a once powerful actor. The dress that acclaimed actress Hanna Rovina wore as Leah, the possessed bride in Habima’s “The Dybbuk,” also stands on display, eerie in its ghostly whiteness and stillness.

The actors who wore these costumes are not widely known in America, and neither are the designers of their costumes. Nor are the actors nearly as well known as Chagall. But their masterful theater has outlived Stalin and his agents in at least one respect: The colorful gouaches, oil paintings, posters, rare films and photographs of performances assembled here provide graphic evidence of Jewish culture renewed, and of daring artistic invention sustained under increasingly difficult conditions. The current exhibit grants not only Chagall, but also his Soviet Yiddish and Hebrew theater colleagues, a well-deserved place in cultural history.

The splendid art that political exigencies denied us in the 20th century can at least be enjoyed now.

Chagall and the Artists of the Russian Jewish Theater can be seen at San Francisco’s Contemporary Jewish Museum until September 7.

Joel Schechter is the author of “Messiahs of 1933” (Temple University Press, 2008), a book about American Yiddish theater, and teaches theater history at San Francisco State University.