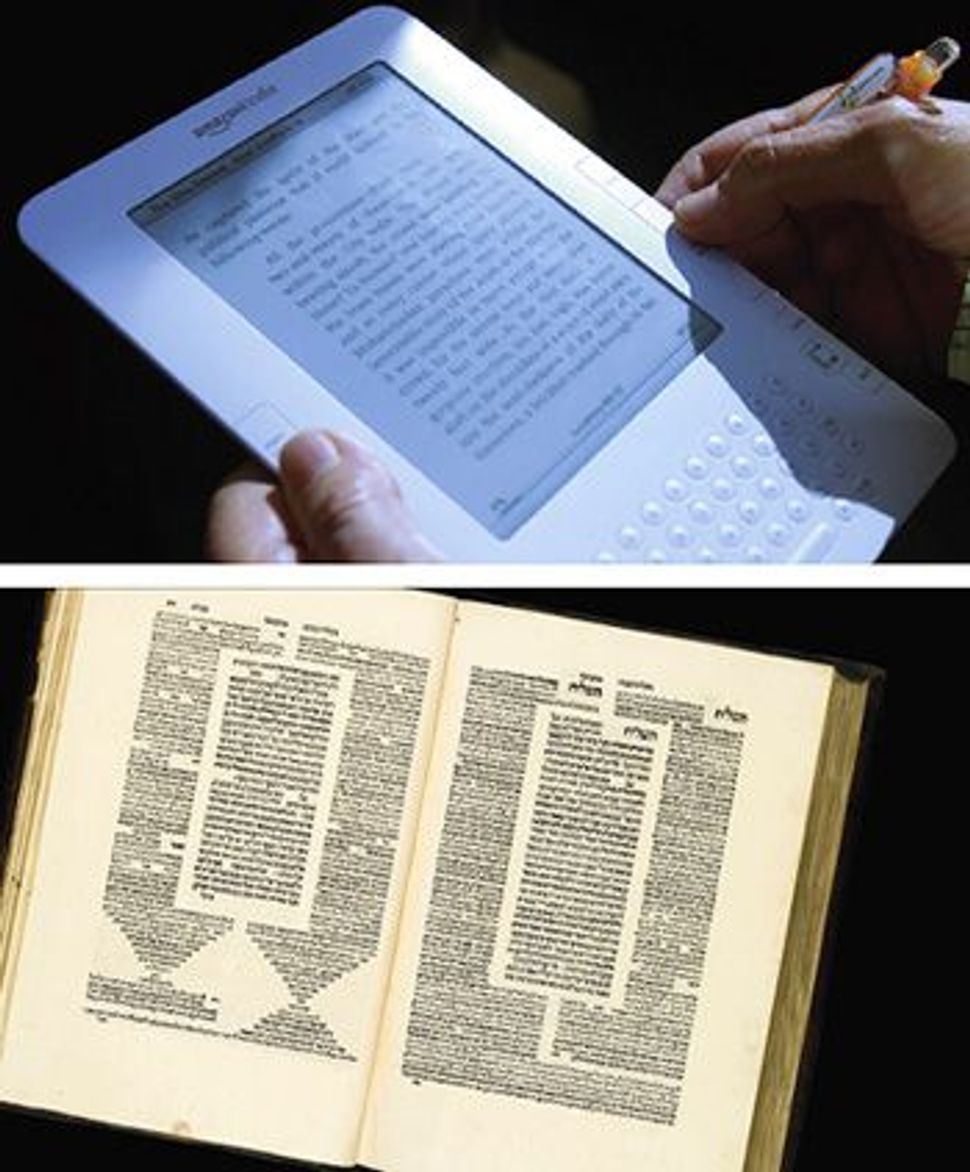 As I sat next to Rabbi Dan Ehrenkrantz at a recent bar mitzvah reception, our chat turned to the Amazon Kindle. Ehrenkrantz, who is president of the Reconstructionist Rabbinical College, is considering getting one. 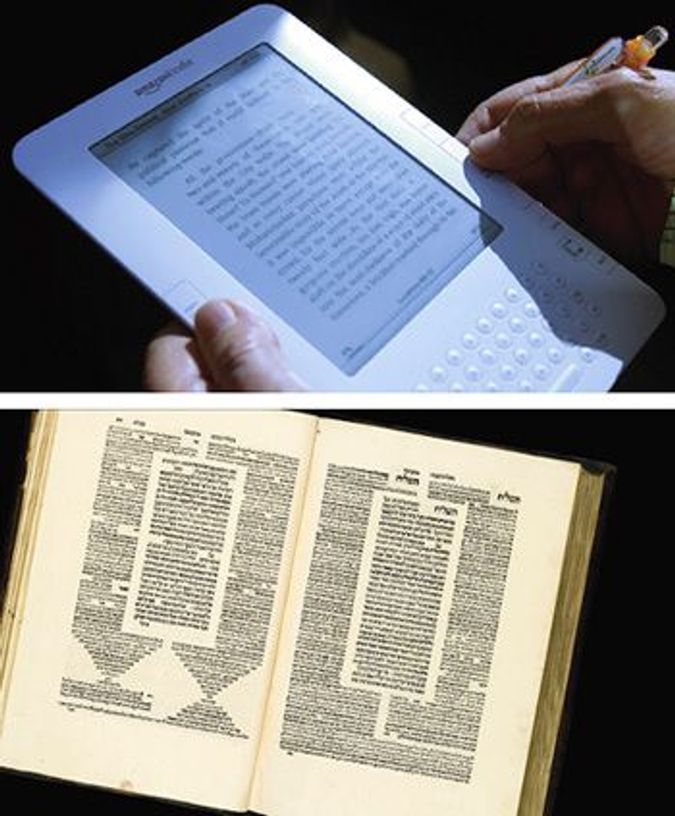 The Kindle is a slim white device that is about the height and width of a book and has a screen and a small keyboard. It’s used for wirelessly downloading books, newspapers and magazines. Amazon, the online retailer, has just debuted version 2 for $359.

It’s a cool object, vaguely Apple Mac-ish with its slim white case, and has obvious advantages over books in their traditional format. Slimmer and lighter than most publications, it’s easier to slip a Kindle into a briefcase or purse. Many digitized books can be carried around at once in a Kindle and you can enlarge the text or even have the device read the text out loud, a boon to the visually impaired.

But who knows? As Ehrenkrantz pointed out, if asked 20 years ago, when they were little more than word processors, how we would use personal computers in 2009, we would not have forecast Facebook or Flickr.

He predicts that sometime soon, all the books that rabbinical students need will be put on a device like a Kindle. The only libraries students use will be digital.

It is hard for me to imagine.

Now, I know that plenty of people use PDAs and laptops for learning Daf Yomi, a daily page of Talmud, and that many of our literature’s wonders are already available online. And, like most, I’m neither early adopter nor Luddite. I enjoy my iPod and am writing this on my Mac G5.

But having visited the exhibit of the Valmadonna Trust Library at Sotheby’s in New York last February, when for the first time it was on display in its magnificent entirety, it is hard for me to imagine a future where our holy texts exist only — or mostly — in the ether of cyberspace.

The Valmadonna is a singularly impressive collection of old Jewish books and manuscripts, some dating to the 11th century. With more than 11,000 titles, it is the largest collection of rare Jewish books in private hands. Its owner, London industrial diamond mearchant Jack Lunzer, is still trying to sell it for $40 million to $50 million.

I visited the exhibition with classmates from Drisha Institute, a center for Torah study in Manhattan where this year I am an arts fellow and have had the privilege of diving deeply into the endless pool of our people’s central literature.

The morning of our visit, I studied the commentary of Rabbi David Kimhi, who is known as the Radak, on Joseph’s conflict with his brothers. Honestly, it felt like just another of the many rabbinic commentaries I’ve been learning under an anonymous rabbi’s acronym.

Then I went to the Valmadonna. Peering closely at one of the oldest manuscripts, I saw that it was a volume of Psalms with the Radak’s commentary.

In that instant, time and space collapsed as I found myself bound to every other Jew who has studied Kimhi’s work since it was penned in the late 12th and early 13th centuries. That moment made clear to me that I am not simply a modern Jew studying in a contemporary yeshiva near Lincoln Center. I am tied to every other Jew through 800 years of history.

I envision Kimhi hunched over his work, and wonder if his soul knows that even still we are learning from him, that his elucidation remains as relevant to the study of biblical text as it was to his contemporaries.

The books of the Valmadonna — the books of our people — bring history alive.

And these books keep our history alive even when the communities that produce them are long dead.

The yellowed, brittle pages of the Valmadonna’s texts — some colorfully illuminated, others beautiful for their pragmatic simplicity — tell stories beyond the print.

This sense of almost physical connectedness to other Jews throughout history, felt by experiencing these precious volumes, is hard to imagine if we live on in only digital form.

When our era has gone, when we are hundreds of years dead and our descendants want to study current Torah scholarship, what will there be for them to look at? What will remain if we no longer publish on paper?

If there is nothing for future students to touch beyond a touch screen, I fear that it could be regarded as just as disposable as the pop novels on a Kindle, deletable at the press of a button.

And that would be the ultimate loss.

What will bind us together through history, if not for paper beyond the scrolls in synagogue arks? What will remain of us, as these texts remain of our now dead ancestors, who live on through the pages they have left?

Seriously studying Torah and its rabbinic commentaries today feels like engagement in an act of cultural rebellion, because it is the precise opposite of the way we communicate digitally.

In the beit midrash, we spend hours grappling with a few lines of Aramaic and Hebrew, following an ancient paper trail through references to related Torah verses and other commentators. The authors of these insights drill down into the text, spiraling down in an ever-increasing contrast to the way we moderns communicate.

The voices of the Radak and his earlier and later colleagues — who talk to each other about the text they are analyzing with little regard for the boundaries of time and space — slowly emerge from among the Twittering multitudes.

Unlike the kinds that flit through my cell phone, it is these eternal lessons — the original text messages — that I hope remain long after we are gone.