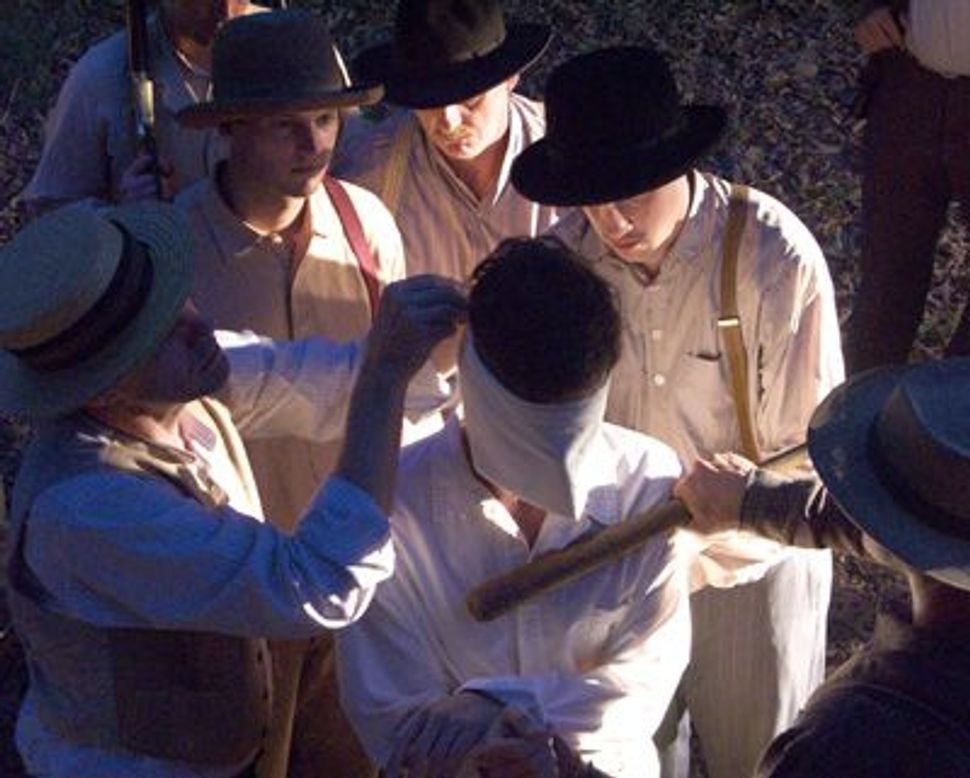 White on White, Not Quite: Thomas Watson: A Jew should ?get exactly the same thing we give to Negro rapists.? Image by Ben Loeterman

No double murder has altered the nation’s cultural landscape quite like this one. The killings of Mary Phagan and Leo Frank stirred latent antisemitism, racism, sectionalism and bigotry that festered below the Mason-Dixon Line before exploding nationwide, leaving shockwaves still felt today. 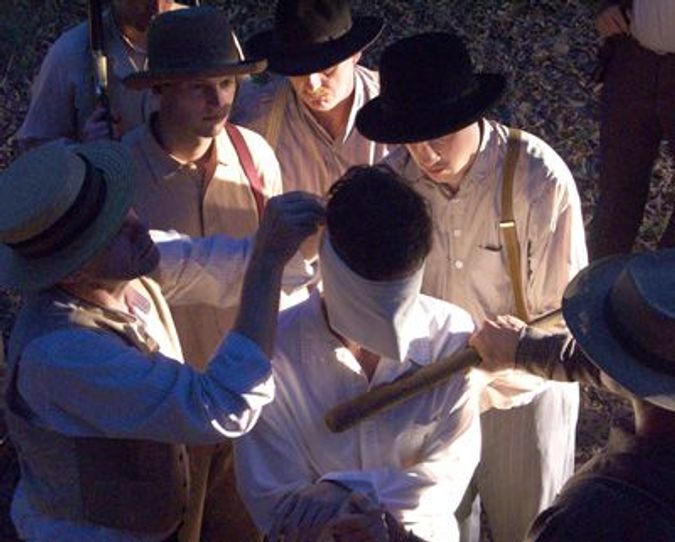 White on White, Not Quite: Thomas Watson: A Jew should ?get exactly the same thing we give to Negro rapists.? Image by Ben Loeterman

On April 27, 1913, 13-year-old Phagan, a gentile white girl, was found strangled at the National Pencil Factory in Atlanta. A black factory worker, Jim Conley, testified that a Northern Jewish supervisor, Leo Frank, had killed Phagan while trying to rape her. Conley’s clever testimony and its implications incensed genteel Southerners, and the all-white jury sentenced Frank to death in a racially unprecedented decision. Two years later, when an outgoing governor commuted Frank’s sentence, livid Georgians abducted the alleged murderer from prison and drove more than 100 miles to lynch him near Phagan’s childhood home.

“The Frank case is a ground zero for schisms still alive in American culture,” said Steve Oney, senior editor at Los Angeles magazine and an expert on Frank. Both the Anti-Defamation League and the Ku Klux Klan were born from the Frank incident, of which the media intensity and scope of effect were like an early-century O.J. Simpson trial.

Early sensational coverage of Phagan’s murder in three of Atlanta’s papers — Georgian, Journal and Constitution — morphed into unabashed bias against Frank. This galvanized Adolph Ochs, publisher of The New York Times, to use his paper to crusade for Frank’s cause. With the Civil War a fresh wound, the New South resented this influence. Surfing a wave of anti-North sentiment, Thomas Watson, a future American senator, instigated the lynching. In his papers ,Jeffersonian and Watson’s Monthly, he condemned Och’s meddling and touted Frank’s guilt, which was eventually confirmed after 13 appeals.

For documentarian and public television producer, Ben Loeterman, who produced content for the Discovery Channel, PBS and the BBC, recent racially motivated hate crimes, like a group of black boys beating a white boy in Jena, La., or the gang murder of an Ecuadorian in Patchogue, N.Y., made Frank an ongoing concern: “There is nothing unique about the social forces in the Frank case that couldn’t happen again in an instant,” he said.

Loeterman envisioned a documentary that communicated Frank’s visceral otherness to a modern audience. The resulting film, “The People v. Leo Frank,” premiered last month in Atlanta, just miles from where Frank was lynched.

Oney had been the first to hold a magnifying glass to the particulars of the case, but it was no easy feat.

“The Frank case was present by its absence in Georgia,” Oney said. “Everyone knew about it, but nobody spoke of it. You’d go into an old country store, and in back would be a picture of Frank’s body after he was lynched.”

Oney spent 17 years researching the events surrounding the case and interviewing what he calls the “linking generation” of aging Georgians who knew the main players. He said the children of those who lynched Frank were easier to talk to than Atlanta Jews.

“What it did to Southern Jews can’t be discounted,” Oney said. “It drove them into a state of denial about their Judaism. They became even more assimilated, anti-Israel, Episcopalian. The Temple did away with* chupahs* at weddings — anything that would draw attention.”

Oney discovered that the murderous mob imagined by so many was actually a conspiracy of aristocratic Atlantans well connected in city government. For Loeterman, this sets apart the Frank case from other lynchings: It was “state-sponsored murder.”

Loeterman read Oney’s 1985 Esquire magazine article on the subject, and realized that antisemitism was merely one facet of a complex, layered tale. Loeterman tucked away the article that predated Oney’s seminal “And the Dead Shall Rise” (2003) — a book that became the instant Frank bible. By that time, Loeterman’s résumé was full of films on the criminal justice system, yet Frank still haunted him, so he decided to call Oney.

For Oney, it wasn’t film at first sight, but Loeterman persisted. After a lengthy courtship, Oney agreed to advise the making of “The People v. Leo Frank,” the first documentary film on the subject. After an early National Endowment for the Humanities grant got the project rolling, Loeterman lobbied for Atlanta’s support.

“Virtually no one outside of Atlanta has heard of the Leo Frank case. Part of my strategy was to bring Atlanta to understand that it’s their history to share,” Loeterman said.

Atlanta understood, giving more than half a million dollars toward production. Some supporters had direct family ties to the events, like former governor Roy Barnes, whose family member helped lynch Frank. Linda Selig, a consultant who helped raise funds, learned that a great-great-aunt on her husband’s side was Frank’s wife.

“She never remarried, and she signed her name Mrs. Leo M. Frank until she died, which was very courageous,” Selig said.

Loeterman, cast and crew descended upon Georgia in 2008 to film re-enactments of crucial moments in the Frank chronology — courtroom scenes, the lynching itself — on the very ground where they occurred.

“If we couldn’t find it in a transcript, a letter, a diary, an account, a report, then we couldn’t use it,” Loeterman said. “It isn’t based on true events, it is true events.”

The consensus among historians today is that Frank was innocent. Conley’s lawyer wrote so on his deathbed, and Oney insists that the transcripts from the commutation hearing leave little room for doubt. It wasn’t until the 1980s, when 85-year-old Alonzo Mann confessed that he witnessed Conley carrying Phagan’s limp body years earlier, that the ADL requested a posthumous pardon to absolve Frank, which was denied. The organization applied for a second pardon on the basis that the state of Georgia failed to protect Frank during his time in its custody, and in 1986 the pardon was granted.

Rich with inherent drama and polarizing social issues, Leo Frank lore is hardly new to adaptation. Matthew H. Bernstein, chair of the film studies department at Emory University, examines the four major fictional treatments of the Frank history in his new book, “Screening a Lynching: The Leo Frank Case on Film and Television” (University of Georgia Press). Two 1930s films, the allegorical “Murder in Harlem” and the revisionist “They Won’t Forget,” were based on the Frank case. A 1964 NBC television series, “Profiles in Courage,” featured Governor John Slaton, who commuted Frank’s sentence, risking his life and shattering his political career. A five-hour 1988 TV movie, “The Murder of Mary Phagan,” starring Jack Lemmon and Kevin Spacey, is arguably the fullest fictional treatment. These later tellings were more comfortable discussing antisemitism, and garnered larger audiences.

Both ’30s films were banned from being shown in Atlanta upon their release, though neither addressed antisemitism. But more than 2,400 people attended the April 30 world premiere of “The People v. Leo Frank” at the Cobb Energy Performing Arts Centre in Atlanta.

“It is a visible sign that Cobb County is not living in dark days anymore,” said the ADL’s Southeast regional director, Bill Nigut, who helped bring the premiere to town.

“It’s therapeutic when something this horrible has happened to try to revisit it, re-dramatize it, reinterpret it — in hopes that it will make more sense,” Bernstein said.

The documentary premieres November 2 on PBS.

Allison Gaudet Yarrow is at work on a memoir about growing up Jewish in the Deep South.