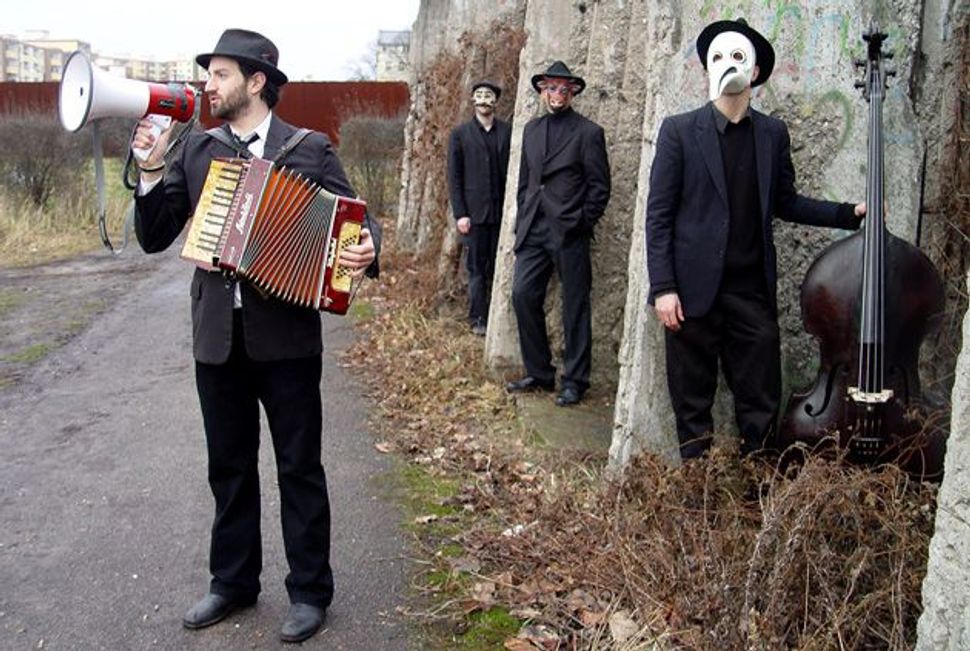 Voice of Protest: From the Wall to the world. Image by courtesy of daniel kahn and the painted bird

Earlier this month, the 90th birthday of folk legend Pete Seeger drew 15,000 people to New York City’s Madison Square Garden. The sold-out show demonstrated the legacy, and continuing vitality, of the American protest-song tradition, a tradition that was born in the Great Depression and gave rise to some of the fiercest critiques of modern capitalism and imperialism in any discourse. Daniel Kahn, a Detroit-born singer-songwriter now living in Berlin, is part of that tradition, while at the same time creating a new musical idiom blending American-folk and Yiddish-protest song. Kahn, 30, is a post-modern folkie just as likely to quote from the Industrial Workers of the World songbook as to cite Marxist critic Slavoj Zizek. But his political sympathies and artistic creations are very much reminiscent of those of Seeger and his progeny.

For example, Kahn was back in the United States, performing, and saw President Obama’s March 24 press conference, at which the president was pointedly asked about the problem of growing homelessness and tent cities springing up around the United States. Disturbed by these images reminiscent of the Great Depression, Kahn woke in the middle of the night and set to work writing original English lyrics for an old Yiddish song about the anger of the unemployed, “Arbetloze Marsh” (“The March of the Unemployed”), originally written by Mordecai Gebirtig.

no work in the factory

every tool is broke and rusted

every wheel and window busted

through the city streets we go

idle as a CEO

idle as a CEO

we don’t have to pay no rent

sleeping in a camping tent

every bite is shared with twenty

let the yuppies have their wine

bread and water suit us fine

bread and water suit us fine

The next day, The New York Times featured Fresno, Calif.’s, tent cities on the front page.

Since then, Kahn has been performing “Arbetloze Marsh,” in Yiddish and English for eager listeners, many of whom are unemployed or holding on to whatever employment they have. As the crowd at Barbès in Brooklyn’s Park Slope saw at a recent show, for Kahn and his band, The Painted Bird, there’s nothing fuzzy or nostalgic about Yiddish song. Indeed, Yiddish song is the perfect idiom in which Kahn can create his highly political and timely art. The songs that Kahn chooses are political in themselves, but at the same time, the choice of Yiddish, the maligned tongue of the exile, is an act of cultural and political resistance.

Over the past few years, Kahn has gained a following in Europe, and now in the United States, for his uncanny ability to connect history, politics and current events in a variety of languages, including German, English and especially Yiddish. In concert, and with his new album, “Partisans and Parasites,” Kahn establishes himself as a high-art folk troubadour, the rebellious Jewish son of Woody Guthrie and Bertolt Brecht.

Kahn, who started acting professionally at 11 and studied drama in college, decided to move to Berlin in 2005 not because of the city’s vibrant Jewish music scene, but because it was the home of Brecht.

Kahn’s music reflects his love for Brechtian drama. Kahn even created his own genre of music, called “Verfremdungsklezmer,” or alienated klezmer, in an overt nod to Brecht’s theory of Verfremdungseffekt, which seeks to highlight the artifice of theater. Verfremdungsklezmer, like its namesake, prods its audience to action through humor and questioning. With The Painted Bird (named after Jerzy Kosin´ski’s grotesque novel of World War II), Kahn often appears onstage in papier-mâché bird masks, alternately playing an accordion, cigar box ukulele, harmonica and electronic bullhorn.

His original songs evoke a Brechtian level of discomfort by problematizing heroes and making the grotesque sympathetic. For example, “Six Million Germans/Nakam” recounts the story of the hero of the Vilnius (known in Yiddish as Vilna) partisans, Abba Kovner, who was among the brave men and women who fought, with few weapons and terrible odds, against the Nazis and their collaborators. Less discussed is Kovner’s decision, with a group of friends, to take revenge on the Germans after the war. Calling themselves Nakam (revenge), they concocted a plan to poison German water supplies and take millions of German victims in retribution. The song, performed as an upbeat klezmer polka, jarringly juxtaposes subject and tone to bring up two of Kahn’s favorite themes, violence and revenge, and forces the listener to question the nature of heroism and justice.

Reworking and re-imagining Yiddish songs, Kahn decries the excesses of modern-day capitalism and sings of contemporary tragedies. Although “Arbetloze Marsh” was written too recently to make it onto the CD, another song on “Partisans and Parasites” voices a similarly fiery populist outrage. “Khurbn Katrina/The Destruction of New Orleans” is perhaps the most compelling moment on the CD. It is based on the 1912 Yiddish song “Dos Lid fun Titanik,” written about the sinking of the Titanic. The inspiration for “Khurbn Katrina” was, of course, Hurricane Katrina and the Bush administration’s disastrous failure to respond to the suffering of the people of New Orleans.

To Kahn, New Orleans is of more than just theoretical interest. He spent a year there after college as a labor organizer working with nurses. And New Orleans is where he was first introduced to contemporary Jewish music. The destruction of New Orleans is personal for Kahn, and he directs his anger at an administration that seemed to do little to prevent the devastation of one of America’s oldest cities. “Khurbn Katrina/The Destruction of New Orleans” is in two parts; the first verses were written collaboratively in Yiddish, and the second, written solely by Kahn, is completely in English. The song begins mournfully, staying close to the Yiddish original, and then transforms into a raucous, New Orleans funeral march in English, with Kahn not so much singing as crying out in mourning:

two lovers they are peacefully lying

in a peace not a soul could disturb

they cried out ‘my dear God we are dying’

but the President seems not to have heard

how terrible is the wrath of the Lord

with the water from the lake down to Bourbon

from Canal to the Lower 9th Ward

oh my Lord… Kahn has been touring Europe nonstop with a brilliant band of pan-European collaborators, Jewish and non-Jewish, such as Russian singer/journalist/academic Psoy Korolenko and Moscow-based blues guitar hero Vanya Zhuk. “Nakam/Six Million Germans” is one of Kahn’s most popular songs and already has been translated into German by a German fan of the song. In Europe, where history is never too far away, Jews and non-Jews are hungry to talk about the complicated legacy left by the slaughter of World War II.

The contemporary Jewish drive to recover a broken past doesn’t exist in isolation, but is accompanied by a larger European desire to heal other cultures also devastated by the losses of World War II, including, but not limited to, the loss of Jewish culture. For Kahn, using old Jewish songs and musical traditions makes sense, not because of their peculiar qualities, indeed, but because of their universality. As Kahn told me a few months ago: “Every people’s story is unique. I’m not sure that it is the unique qualities to the Jewish experience that give it its meaning… it might be the qualities that Jews share with other people: oppression, poverty, isolation, otherness.…” With “Partisans and Parasites,” Kahn and his collaborators force us to question the unique, and the universal, for ourselves and for our neighbors, and for our shared future.

Rokhl Kafrissen is working on a book called “The Myth of the Yiddish Atlantis” and writes for Jewish Currents magazine.