When Moses Saved the Man of Steel 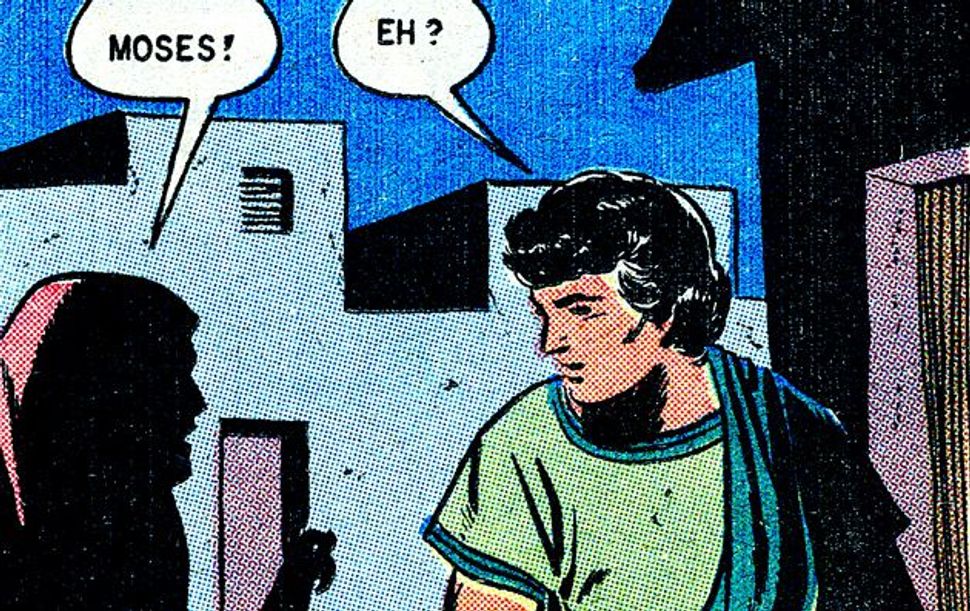 For millennia, people came by their knowledge of Moses, the Ten Commandments, and Adam and Eve by reading the Bible and its commentaries. But since the 1940s, and well into our own day, comic books such as Dell Publishing Company’s 1957 “Moses and the Ten Commandments,” a brightly colored, exclamation-ridden account of the ancient biblical tale, and R. Crumb’s forthcoming “The Book of Genesis” (W.W. Norton), arguably the most important comic book version of the Bible ever, continue to give the original text a run for its money.

At first blush, the association between the Bible and the comic book undoubtedly occasions a raised eyebrow or two. Given the latter’s smirky sensibility and gee-whiz cadences, it is hard to imagine a more inhospitable venue in which to encounter the word of God. All the same, graphic versions of holy writ have long taken hold of the American imagination and show no signs of letting go, underscoring the complex and entangled relationship between popular culture and religion in modern-day America.

Still, many Americans of an earlier generation were quick to voice their displeasure, insisting that the comics trivialized and dishonored the Bible. What’s more, these critical voices were even quicker to attribute a raft of societal problems, from the spread of communism to the eruption of juvenile delinquency, to the comic book’s luridly illustrated pages. As David Hajdu relates in “The Ten-Cent Plague” (Farrar, Straus and Giroux, 2008), his sprightly account of the nation’s relationship to this most vernacular of print media, comic books bore the brunt of considerable cultural anxiety about the nation’s moral well-being. The stuff of long, drawn-out public hearings, the wildly popular medium set Congress’s teeth on edge, provoked parents into helpless sputtering and prompted the nation’s clergy, especially its Catholic priests and nuns, to insist that “comics are crimes against our children.”

Of all the institutions that cast a woeful eye on comic books, the American Catholic Church was most zealous in its disapproval, all but anathematizing them as the work of the devil — or his close kin, the Jews. This most vernacular of American print media was “neither Christian nor American,” categorically declared the Catechetical Guild, an authoritative Catholic organization, in 1944, as it condemned the large number of Jews who made a living from publishing and illustrating comic books, among them the inventors of Batman and Superman. Placing these stalwarts of the comic book industry, as well as their products, beyond the pale, the church not only orchestrated boycotts of local newsstand and candy store proprietors who carried comics, but also went much further still by encouraging its young faithful to burn them in spectacular bonfires. Book burnings?! In the good ole’ US of A? And just a few short years after World War II?

While we might find it hard to comprehend, much less condone, the church’s actions, its supporters had no qualms on that score. On the contrary. In the wake of one such event conducted in 1948 by the parochial school students of Binghamton, N.Y.’s St. Patrick’s Academy, The Catholic Sun actually heaped praise on their incendiary efforts, writing that they were “to be congratulated for they have earned the respect and regard of every good American.”

Even as it torched the comic book’s reputation, the Catholic Church devised another strategy to minimize and contain its impact: the publication of its own, internally sanctioned comic book versions of Scripture and church teachings. Grudgingly aware that their animadversions went only so far, church leaders decided to give the competition pause by both sponsoring and endorsing “Treasure Chest of Fun & Fact,” which deployed several of the tamer visual conventions of the comic book to explore a wide array of traditional subjects, from the lives of saints to the importance of Lent and the history of Gregorian chant. Its bold graphics, pithy prose and action-packed sequences sought to energize Catholicism, rendering it active, modern and relevant to a young American audience increasingly fond of superheroes.

Those interested in reading “Treasure Chest of Fun & Fact” would not find it on the corner newsstand. The product was distributed exclusively through the good graces of the parochial school. Dell Comics was another matter entirely. Thanks, no doubt, to its reassuring credo, “Dell Comics are good comics,” and to its pledge to parents that the contents of each and every one of its comic books contained “only clean and wholesome entertainment,” it successfully positioned itself as an alternative to both Catholic-oriented comics and their more unbridled, secular counterparts. “Moses and the Ten Commandments” was a case in point. Capitalizing on the success of Cecil B. DeMille’s 1956 epic film, “The Ten Commandments,” the comic strip version added another layer to the steadily growing corpus of Decalogue-related events, monuments and artifacts that swept the nation in the mid-1950s.

Largely faithful to the contours of the age-old story, “Moses and the Ten Commandments” sped up the plot, spiced up the biblical language with lots of “Eeeee’s”, “Aha’s” and “Uh’s,” and depicted the story of the Exodus and the giving of the Ten Commandments at Mount Sinai as one hell of an adventure yarn. As for Moses, nothing — neither fearsome lions nor cruel pharaohs — could keep him from righting society’s wrongs. A hero well worth emulating, the Moses who emerged from these pages saved the day. Redeeming the comic book in the process, “Moses and the Ten Commandments” and the other religiously themed graphic accounts that have steadily followed in its wake remind us more than half a century later that, in modern America, religion and popular culture are not mortal enemies, but bosom buddies like Batman and Robin.

When Moses Saved the Man of Steel