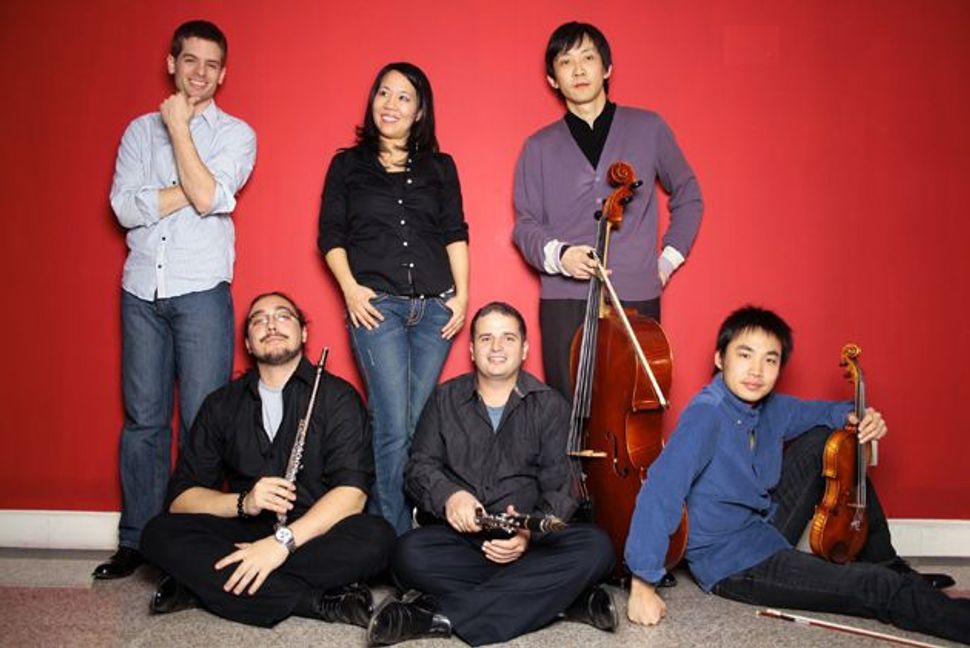 Last Christmas, a group of very lapsed Jews gathered around a table of very treyf *Chinese food — in China, for good measure. Eventually, someone remembered that it was the fifth night of Hanukkah, too. Soon, a low-rent menorah punched out of sheet metal was produced from a battered Chabad box, and candles were lit. Most of the assembled stumbled through the first prayer — “…shel Hanukkah” — and an awkward pause ensued as brains were racked for the second incantation. Eli Marshall stepped forward, scanning the battered box’s Hebrew print, and rendered melodically, to the amazement of all: “… she’asah nisim la’avoteinu bayamim haheim baziman hazeh.”* Amen, and pass the spare ribs.

The next day, as the frigid weather swirled outside, he was back in his apartment, examining scores and listening intently to studio tracks recorded by the Beijing New Music Ensemble for its debut album, due out in June. Under Marshall’s baton, the ensemble — China’s only chamber group devoted to modern works of music — has risen from humble beginnings in 2003 to perform, to acclaim, across the Chinese-speaking world and to be featured in a lengthy segment on BBC Radio 3. Now, the debut disc — “Wild Grass” (Naxos) — heralds Marshall’s assumption of a new role: the most prominent Jewish musician based in East Asia.

“I think there is something to this ‘wandering Jew’ phenomenon,” Marshall mused, pointing to a postcard depicting renowned rambler Gustav Mahler, affixed to the wall near his piano. Granted, Marshall is not in forced exile: “I think why Jews are so closely linked with being musicians has something to with the wandering aspect both share. I wandered to Beijing out of an interesting Chinese culture, but staying was a practical matter, too: it was an attractive, exciting city that was really, really cheap.” And this appealed to his musical or Jewish side? “Both,” he said, chuckling. “But it’s an important piece of the puzzle that shouldn’t be overlooked; I see a grand tradition of itinerant musicians, Jewish or Gypsy, who travel to wherever they can go without giving up their rituals.”

Hailing from Montville, Maine (population 1,002), Marshall ascended through the Curtis Institute of Music, Yale School of Music and, finally, a Fulbright grant that landed him in Beijing. Recognition soon followed, with a Young Composer Award from the American Society of Composers, a prize given to those under the age of 30 with promising talents. But he frequently recounts how, “born to a Jew and her husband in rural Maine, it was the latter who told us the most Bible stories and lit candles.” At age 50, Marshall’s father “took the plunge — literally! Into a mikveh!” and converted. Hebrew school, a bar mitzvah and impressive long-term memory all contributed to Marshall’s affecting Christmas recitation.

Attending Curtis, he met a classmate from Lviv in western Ukraine, the next oblast over from his great-grandmother’s hometown of Ternopil. “Solomiya was planning a homecoming concert in Lviv, and I thought: My great-grandmother spoke four languages and played violin — and just like that, was forced to marry a man from Moscow fleeing conscription in the tsar’s army,” Marshall recounted. “She had my grandfather, and took him to America, and raised him and his three brothers through the Depression. Later my grandfather raised his brothers by working as a Philadelphia paperboy. Skip a generation, and here I am back in Philly, and I meet this violinist from western Ukraine.” So he composed a homecoming piece of his own. “It was a violin concerto, a darker, more somber take on “Di Kale Bazingen” — “Singing of the Bride” — maybe as it was heard by my great-grandmother.”

Roots notwithstanding, Marshall’s outward Jewish observances are few, and he has staked his career on something rather different: the distinctive musical voices being fused in today’s China. “Wild Grass” carries music by Zhou Long and Chen Yi, the husband-wife powerhouse who rose to prominence in the same generation as Tan Dun — a generation known to some as “ ’78ers” for the year when the Central Conservatory of Music in Beijing reopened following the chaos of the Cultural Revolution. Zhou and Chen’s muse, in turn, is the author Lu Xun, whose writing reflected a yet earlier China propelled through cataclysm and tragedy.

“Needless to say, there’s a lot in common with the Jewish experience there,” Marshall explained in a later interview, over the phone from the northwestern Chinese city of Yanji. He riffs on another key cultural resonance: “This idea of commentary, generations commenting upon generations, a conversation through the ages. It is very Jewish, and it is also very Chinese; there aren’t many other cultures that have had a continuous textual tradition as long as those two. In this disc Yi and Long offer commentary on old traditions, instruments, melodies, styles and also, quite literally, on Lu Xun’s text,” which Zhou Long intones in Mandarin on the album’s title track.

Marshall continued: “There’s something I love about working with Chinese composers. There’s something very Jewish about them; even if they wanted, they can’t run away from the cultural baggage that ties them to being Chinese. Wherever they go, it’s still there, and it has to be dealt with as material in their music, which is what Yi and Long are clearly doing here. The material in ‘Taigu Rhyme’ [the disc’s final three tracks] draws on an instrumental style from the Tang Dynasty. There’s that feeling of going back to your past, but not doing it exactly the same way.”

Another conversation through the ages occurs on the clarinet, in the hands of the patrilineally Jewish Keith Lipson. “His teacher was Yehuda Gilad,” Marshall said. “He learned how to bend and intone the notes in a distinctively Jewish style, and you can hear a little bit of that klezmer flavor in ‘Taigu Rhyme.’” At the time of research, Lipson himself was out of reach in Germany — on a pilgrimage to seek out Gilad’s own teacher before he returned to Beijing for the ensemble’s keynote June 13 concert, timed and themed to the album.

Jews in China have a long history that spans centuries and includes several distinct communities. Mightn’t that be material, too? “Not quite yet,” demurs Marshall. “But I am tentatively planning a cycle of works covering the great historical Jewish communities in China: Kaifeng, Shanghai, Harbin, beyond. It could be fascinating; it’s a very Jewish idea to be a member of a diaspora while also being rooted in local traditions as these communities were, to varying degrees. I like the idea that this music could be the same thing: playing to a local audience, but heard by the whole tribe.”

Nick Frisch is a 2009–2010 Fulbright scholar researching music development in China. He has lived in Beijing, Hong Kong and Taipei.