Luftmenschen Take to the Airwaves 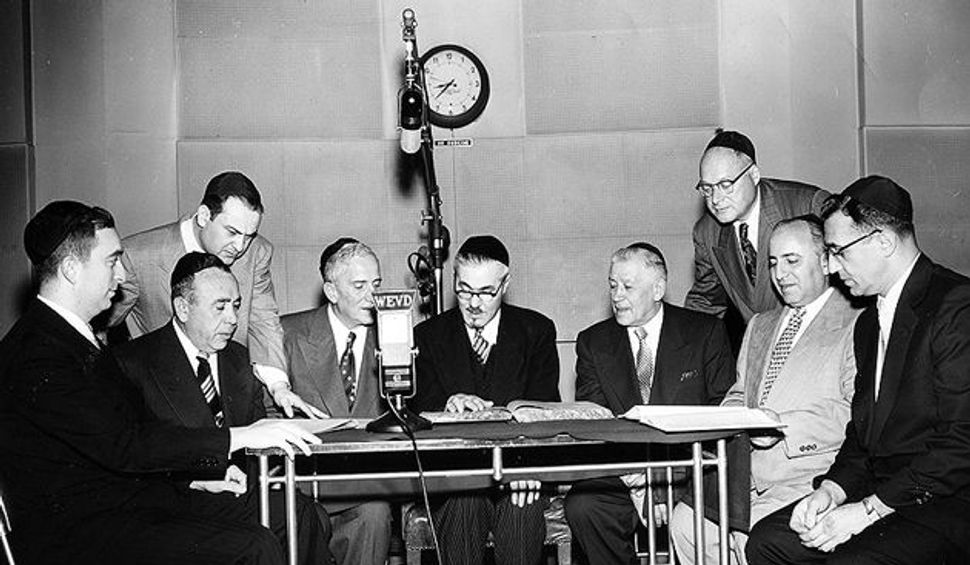 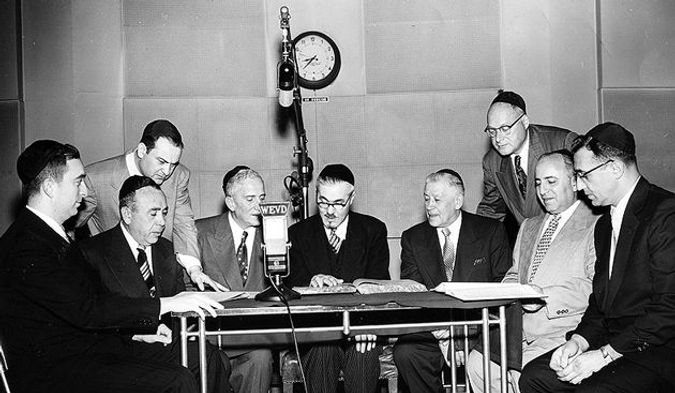 Now that the exuberantly noisy klezmer revival has joined the cresting domestic use of Yiddish, as well as the rise in academic studies of Yiddish language, literature and culture, it is good to reflect on the great pleasures of old-time Yiddish radio. The Yiddish Radio Project, a popular NPR feature a few years back, has turned into a permanent online shrine, full of labyrinthine joys and recordings that offer simultaneous English translations for listeners who don’t know a schlemiel from a shlimazel. Ranging from the sublime to the ridiculous, these Yiddish radio excerpts from the 1930s through the 1950s are bewilderingly varied in style, content and quality. 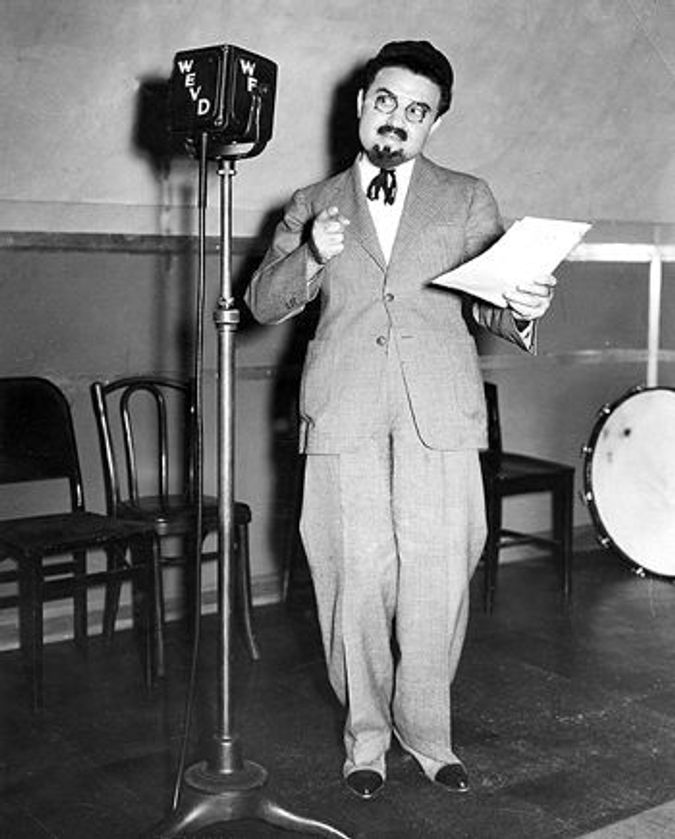 Commercial Appeal: This 1936 photo shows an announcer introducing a rabbi to bless the ?vacation follies.? Image by Forward Association

A cultural history is required because some precious surviving broadcasts truly exemplify intelligence, elegance and wit, the best elements of any culture. Those who recall the Ukrainian-born actor Zvee Scooler (1899-1985) only from his brief late film roles as an emaciated rabbi in films like “Hester Street” (1975) and “The Chosen” (1981) are missing the full measure of this actor’s talents. On Yiddish radio in the 1940s as “Der Grammeister” (“Rhyme Master”), Scooler had an extraordinarily malleable and emotionally communicative voice, refined but characterfully human.

His gracefully rhyming screed “Vacation in the Mountains” satirizes the postwar urge to run off to the Catskills every summer, paying top dollar to see boorish comedians and swill booze. Another Scooler monologue, “Nothing” (the Yiddish original is “Gornisht”), implying a more absolute void than mere nothingness, is a fascinating existential philippic from 1947 — exploring how a tiny atom, close to nothing, can cause bomb explosions that may reduce all of humanity to nothingness as well.

Yet a mere click away from the poetic Scooler are, also preserved with pious care, dreykop radio commercials for “Mrs. Weinberg’s Chopped Liver” and “Portnoy’s Trusses,” the latter product presumably unknown to Philip Roth.

“Station Identification” explains how this immense range of quality came to occur. Developed notably by the Jewish Daily Forward in the 1920s and, later, aimed at the 2.5 million Eastern European Jews who came to America between 1881 and 1924, Yiddish-language radio “presented domesticated sound … for a generation struggling to make themselves at home in America.”

In 1924, two years before the first Yiddish broadcast actually occurred, the Forward already had advice for readers who faced the choice of whether to buy a radio or phonograph for their homes: “The proper thing is to get both a radio and a victrola.” Soon Yiddish programs burgeoned and were heard on stations that also offered shows in a range of foreign languages. For budgetary reasons, no radio station devoted entirely to Yiddish programming ever existed.

Economics also motivated the strident hucksterism heard on some programs, like the homey advice dealt out by “Der yidisher filosof,” which “Station Identification” qualifies as possessing a “distinct brand of wisdom, criticism and snake-oil salesmanship.” Aaron Lutzky’s (1894–1957) intensely resonant hard-sell of his sponsors like Carnation milk has quasi-religious conviction, whereas the soap opera writer Nahum Stutchkoff (1893-1965) flogs Manischewitz matzo with fanatical and quickly off-putting zeal.

Beyond mere monetary motivations, the intimacy of Yiddish broadcasts, which kept them within a family of emigrés, clearly allowed a wildly differing sound palette: from bloodcurdling family melodramas to female cantors (unemployable in synagogues but popular on radio); from unctuous Yiddish swing singers like the Barry Sisters (née Bagelman) to the raucous song parodist Mickey Katz (1909-1985), whose in-your-face yucks make Allan Sherman seem like Sir John Gielgud. Katz (father of the actor Joel Grey, né Katz) may have been a vulgarian, but he was our vulgarian.

Such wide-ranging and all-inclusive entertainment, often focusing on domestic subjects, was directed at the same limited in-crowd of listeners. Small wonder that in the 1930s, as “Station Identification” notes, Yiddish radio fully discussed the perils of Hitler-controlled Europe, whereas Jewish entertainers like Molly Picon on English-language programs timidly avoided even a mention of the war in Europe. As Kelman points out, “until after Pearl Harbor … [pre-World War II] American Jewish leaders took a more tepid political stance in English than they did in Yiddish.”

The close companionship of the audience could also create family-style discords, as in 1955 when Ruth Glazer, identified by Commentary magazine as an “occasional commentator on Jewish manners, morals and cooking,” attacked in print one of the medium’s cherished stars, the Polish-born singer Seymour Rexite (1908-2002). It is hard not to be seduced by Rexite’s blithe Yiddish version of “The Surrey With the Fringe on Top” from Rodgers and Hammerstein’s “Oklahoma,” but Glazer managed — dismissing Rexite as a “Yiddish Liberace” afflicted by a “slightly nasal tenor voice” that “quivers, it trembles, it vibrates. In point of fact, it bleats.”

In those years when Yiddish radio thrived, performers could tolerate even harsher reviews, like that of the dyspeptic journalist who raged in the Foward in 1932 that if pogroms ever occur in America, “they will be directed against ‘The Yiddish Hour’ on the radio. Every idiot, every bonehead that can put two words together is an announcer… It’s enough to make you an anti-Semite.”

Such vehemence was to be expected as a reaction to something that was so vibrant, and that touched people so deeply. The living entity of Yiddish radio cannot be recreated now, as Jeffrey Shandler, professor of Jewish Studies at Rutgers, implied in his astute “Adventures in Yiddishland: Postvernacular Language and Culture” (University of California Press, 2005), because few contemporary fans of freewheeling Yiddish cultural creativity in its widest spectrum continue to speak it as a lingua franca.

Mandy Patinkin’s recent singing performances in Yiddish may strike some as mostly brash, whereas more artful attempts to recreate old-style Yiddish flavor by younger performers like Janet Klein and her Parlour Boys can seem eerily antiquated, however accomplished.

Unlike klezmer and even Yiddish literature, Yiddish radio, at least as it once was, is no longer. But may be relished in archival recordings, some recently released on CD as well as on the doughty, reliable “Forward Hour” to be endlessly marveled at and delighted in — even if we may no longer duplicate the violent reactions of love and hate regularly felt by listeners of yore.

Luftmenschen Take to the Airwaves