A Horse! A Horse! My Horse for a Theater! 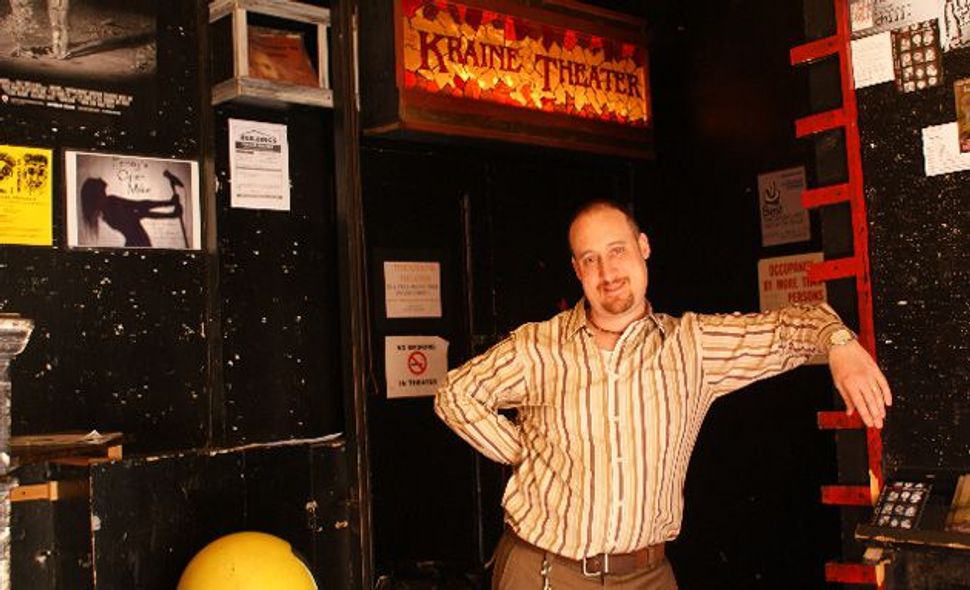 On cold winter New York nights in the late 1990s, Erez Ziv could be seen driving a horse-driven carriage and smiling as big as the moon. A rare Israeli among the otherwise Irish population, he excelled at the act he performed for tourists seeking romantic turns in the park or through Times Square. Regaling them with stories about the city, he made his riders feel like they were in the most important and exciting place in the world. It was an act of generosity, really, because they would have paid just to listen to the clop of the horse beneath them, but he wanted to make their experience extra special.

Before long, Ziv was approached by a friend who dreamed of starting a theater in the East Village. Without any experience in the business (but with a lot in showmanship and customer respect), Ziv traded in his horse and buggy for a partnership in what has become Horse Trade Theater Group. Now solo, he currently owns three theaters — the Kraine, the Red Room and Under St. Marks — and is a stable yet energizing presence in the downtown theater scene.

In June, Ziv announced a new crop of residents, each of whom will produce his or her own plays and learn the business of the theater. The resident program has been successful both for his theaters and for those chosen. According to Ziv, this year alone, resident productions have had four positive reviews in The New York Times.

All in all, Ziv runs hundreds of plays every year, and the range of productions is vast. This summer, Horse Trade is staging not only a poppy multimedia production about Internet confessions, but also the high school favorite “Arsenic and Old Lace.” One production, Ziv is particularly excited about: an all-female version of Shakespeare’s “Julius Caesar.”

During the winters, instead of trying to keep his horse moving and his hands from freezing, Ziv produces the Frigid New York Festival from his warm office under the KGB bar in the old Ukrainian Socialist Worker building. Sometimes these shows take the form of experimental hyper-sexualized craziness, while others are well-crafted operations such as the spooky “Pumpkin Pie Show” and last year’s critically acclaimed “Hostage Song,” an indie-rock musical.

Ziv receives hundreds of applications from all over the world for his festivals. And every year, following the Canadian Fringe Festival model, he “lets God decide” and pulls titles from a hat. Even though a particular show from Japan or a weird one from Texas might round out the festival nicely, he doesn’t fudge the process.

In the same way that you wouldn’t call “indie-movies” “off-off-blockbusters,” Ziv and the downtown theater community no longer refer to what they do as “off-off-Broadway.” Theirs is a different product with different goals.

“If they don’t have to worry about the operation or the relationship with the theater management, they can concentrate more on what is going onstage,” he said. His ethos has attracted many new actors and directors because of his reputation for creating an unintimidating space — something uncommon in the New York theater scene.

Ziv isn’t feeling the pinch of the economy, in fact just the opposite. Audience members no longer want to gamble a lot of money on expensive ticket prices, and so they are gravitating toward the unexplored. Since Ziv’s shows are usually priced at less than $20, he has seen an upsurge in attendance.

Furthermore, the shows that are coming his way are more polished than ever. “Because people have less money to produce shows, directors and actors who ordinarily would have preferred a bigger space are coming to our smaller theaters and improving our product,” he said.

And if the quality of downtown theater keeps improving, Broadway may have to thank the alternative theater scene for not making it refer to itself as off-off-off-off Broadway.

Micah Kelber is a writer and freelance rabbi who lives in Brooklyn. He is currently writing a screenplay about divorce in New York in the 1940s.

Micah Kelber speaks with Erez Ziv about his transition from stagecoach driver to theater owner.

A Horse! A Horse! My Horse for a Theater!