A Bubbling Font of Creativity 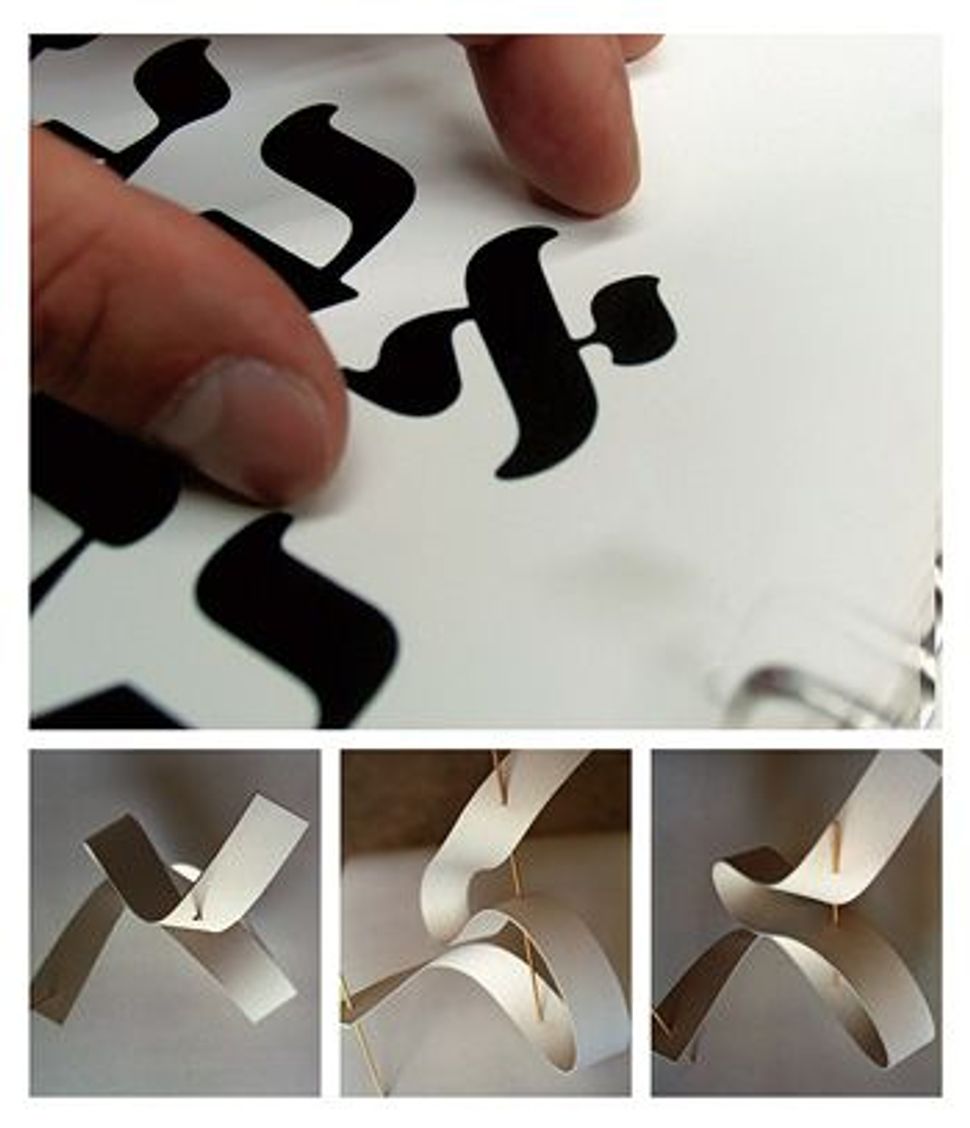 Despite its ubiquity, type design is easy to overlook; it’s the meaning of words that usually matters, not their appearance. 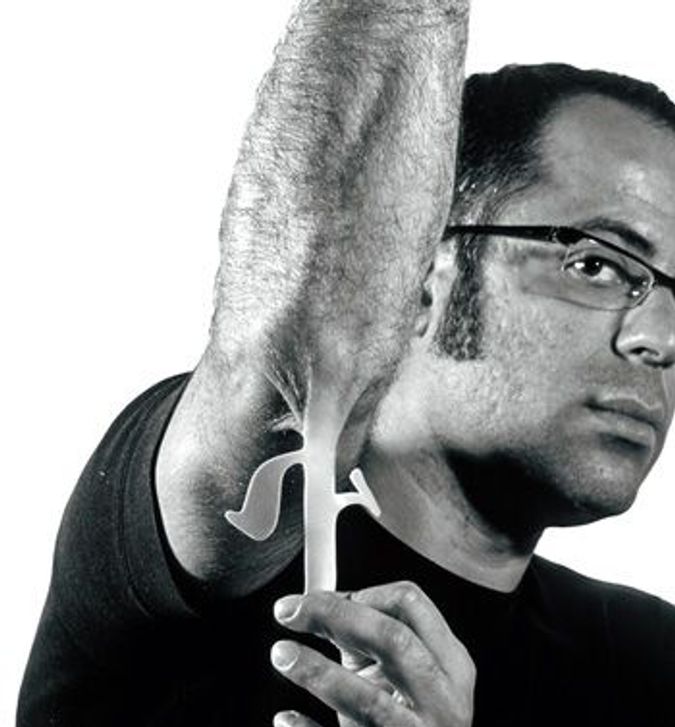 But for Oded Ezer, an Israeli artist and type designer, typography lends a whole other life to language. In his work, which has appeared in museums and won design competitions worldwide, letters aren’t static symbols but living, growing, breathing beings. “The Typographer’s Guide to the Galaxy” (Die Gestalten Verlag), a new book showcasing his designs, provides a sampling of his functional and experimental work, his corporate logos and sketchbook drawings, and projects so strange that they defy classification.

“I wanted to show the profession of typography as a place that’s a bit weird and a lot of fun,” he said, explaining the book’s reference to Douglas Adams’s science fiction classic, “The Hitchhiker’s Guide to the Galaxy.”

Like the wacky universe of Adams’s imagination, for Ezer, type design is a realm of possibility and experimentation, an art and a craft, a profession as well as a creative imperative. Though he thinks of his work as typography, much of it is at, or beyond, the edge of legibility, a fact for which he makes no apology.

“When it is not legible, it has an extra-emotional message. So it is legible in the sense of emotion. And sometimes it is much more effective,” he said.

Perhaps Ezer’s best-known project is Biotypography, a series of drawings, models and thought experiments that ponder the intersection of life and letter. He began the series in 2005 with a collection of creatures — half-letter, half-insect — made out of black polymer clay, black sponge and plastic. Arresting in their strangeness, these letter-insect hybrids seem both monstrous and sad, like a futuristic science experiment gone horribly wrong. Though the actual models have never been exhibited publicly, photos of the work have been featured in design shows from Moscow’s Golden Bee to Istanbul’s Grafist, and have been published in such magazines as Hong Kong’s Design 360 and Prague’s Typo. 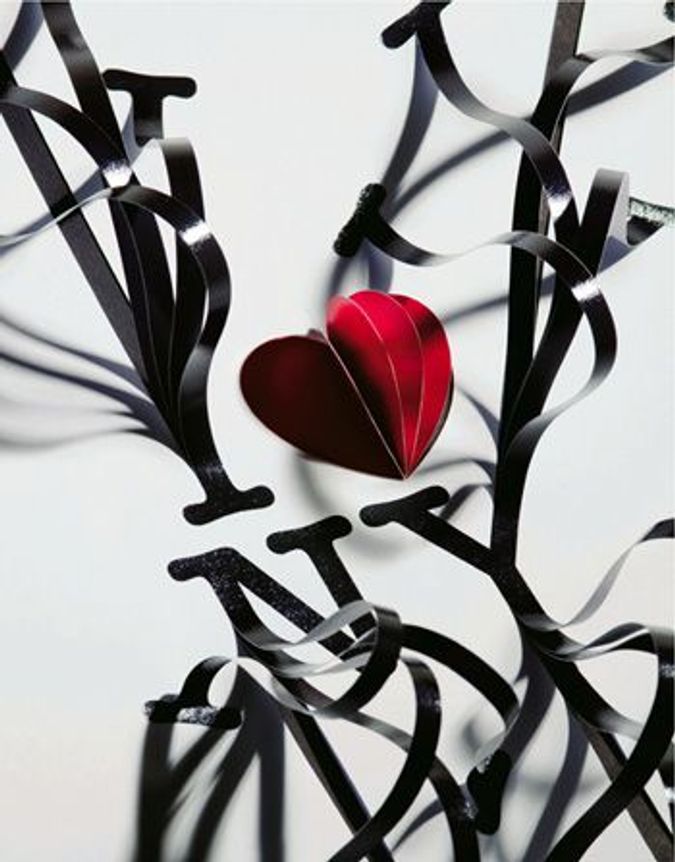 Typosperma, the second installment in the series, goes deeper into the speculative science of typographic life forms. The project, which was included in the Design and the Elastic Mind exhibition at New York’s Museum of Modern Art in 2008, imagines typographic information implanted into the DNA of sperm cells. Here, too, the results aren’t exactly letters, but sperm with letterlike appendages. They are less of an animate alphabet than they are the building blocks of a race of typographic creatures.

While Ezer’s international reputation comes from his experimental work, he is also one of the most successful commercial typographers working in Israel. His Alchemist, Meoded and Ta’agid typefaces are best-sellers.

Working with the Hebrew alphabet has been both a source of opportunity and a difficulty for Ezer. In a country as small as Israel, where alienating any part of the consumer population can be disastrous for a business, commercial designs tend to be safe and conventional. But Hebrew also has given Ezer an opportunity to stand out from type designers working with the Latin alphabet. The history of Hebrew typography for Hebrew (rather than Yiddish) is also still in a unique stage, due to the long disuse of the language as a day-to-day, secular means of expression.

“There is something very weird about our history, because Hebrew has existed for 3,000 years but Israel has existed for less than 70 years, so we have a big gap that has to be filled. In this sense it can be a great journey to try to bring forms from the past into the future. I see it as kind of a mission for typographic designers to investigate not only what happened after 1900, but much earlier,” Ezer said.

His commercial work may be just a day job, but Ezer takes it seriously and finds it to be a rewarding, creative outlet. It’s between professional assignments, however, when he’s unrestricted by commercial constraints, that Ezer really lets his imagination loose. 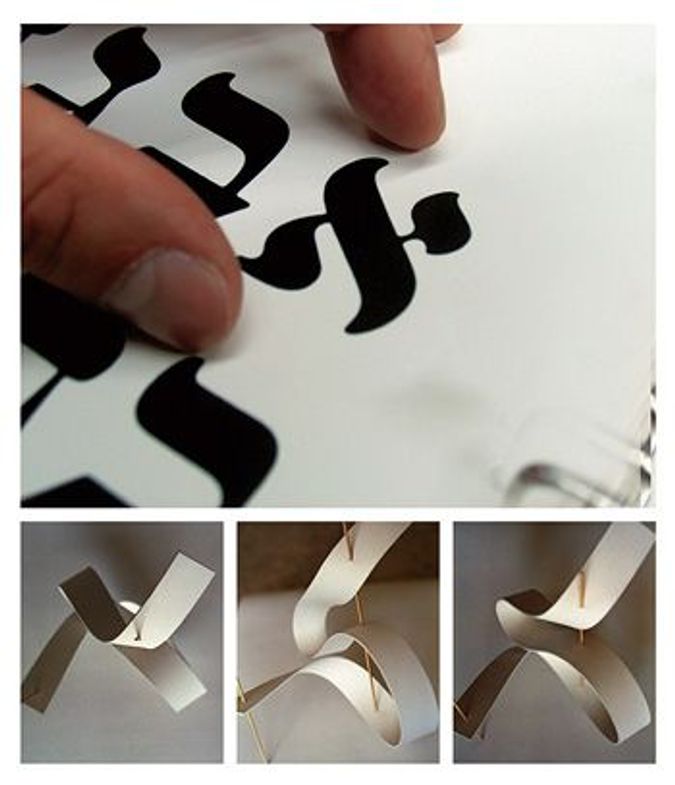 Boredom has long been one of his chief motivators and sources of creativity. Born and raised in the Tel Aviv suburb of Ramat Gan, Ezer, 37, remembers wanting to break free from his neighborhood’s sleepy confines.

“I felt that the buildings were too gray for me, and everything was too regular and boring, compared to Tel Aviv. So I used my imagination to improve the city around me,” he said from his sun-lit home studio in Givatayim, where he now lives with his wife, Ruthie, and his 2.5-year-old son, Adar.

Aside from the wandering of his own imagination, Ezer finds inspiration in the work of poets, artists and, occasionally, other designers. While studying at the Bezalel Academy of Arts and Design, he was deeply influenced by J. Abbott Miller’s pioneering three-dimensional typographic experiments, and his work often illustrates the porous boundary between the two-dimensional world of type and the three-dimensional world in which we live.

In “The Finger Project,” a short film and poster dedicated to the late Israeli poet, choreographer and art critic Hezi Leskly, letters curl and extend themselves out and away from the paper, like plants growing new shoots and branches. Similarly, in his recent homage to American designer Milton Glaser’s legendary I Love New York logo, the design seems to be pulling itself off the paper and into three-dimensional space.

Whereas in his commercial work Ezer uses standard, computer-based tools, in his personal projects he favors low-tech materials and methods. For “Unimportant and Nothing,” a poster inspired by the avant-garde Israeli poet Yona Volach, he used 10 pieces of gum that he chewed himself. Such homemade media, though mainly excluded from his commercial work, nevertheless have their influence on his mainstream projects.

“His physical handling of the letterforms reveals both a tenacity and a delicacy, as though he were spinning glass, pounding metal into foil or throwing pizza dough,” writes Canadian typographer Marian Bantjes in her foreword to “The Typographer’s Guide to the Galaxy.” “He makes the inanimate animate: Words stand and wave, spill their guts, then take a bow.”

The two sides of his life and work come together in other ways, as well. One of his most satisfying recent assignments, which was both creative and functional, was a ketubah he designed for a friend.

“I feel like it was a mixture between commercial work and artistic work, and in this sense it was a great experience. It’s one of the few design works that make people happy. When you buy Coca-Cola, the package needs to sell you the Coke inside, but it does not make you happy. But when you deal with a ketubah, you deal with joy, with happiness, so that was a great revelation to me,” he said.

As his reputation grows both in Israel and abroad, Ezer has been branching out, working more with the Latin alphabet, while at the same time pushing two of the most recent editions to his font catalog, Ezer Block and Beit Hillel. He also has been working on the third installment of Biotypography, a project that fuses typography with Leonardo da Vinci’s drawings of human embryos.

Given his prolific output, Ezer still must be getting bored. But whether he’s creating new Hebrew fonts, designing posters or giving birth to some bizarre typo-creatures, Ezer is certainly never boring.

Ezra Glinter is a Canadian writer and a fan of Goudy Old Style.

A Bubbling Font of Creativity