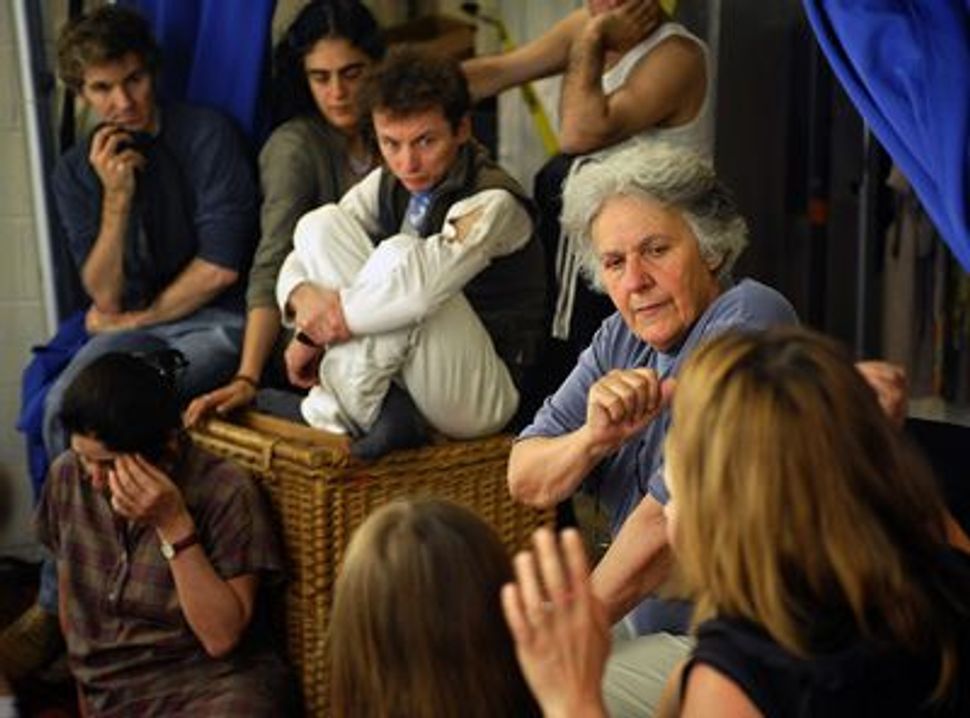 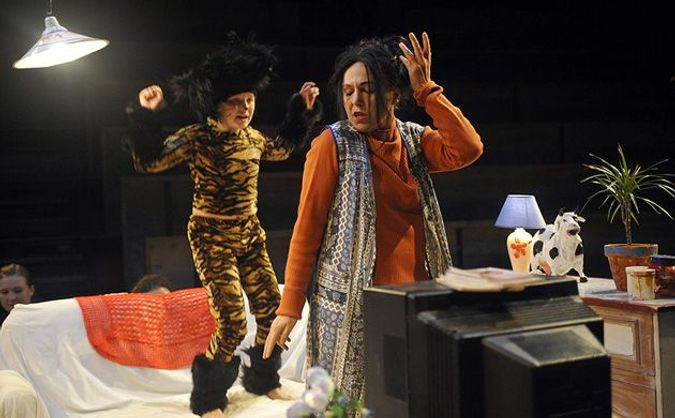 Emphatically Not ?Cats?: ?Les Éphémères? (above), the latest production by Ariane Mnouchkine (below, in discussion) lights up Park Avenue Armory. Image by STEPHANIE BERGER PHOTOGRAPHY 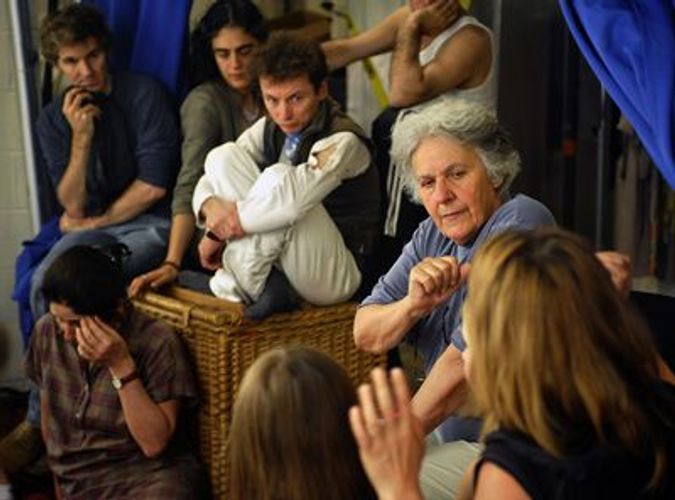 Mnouchkine, 70, founded her group in 1964, and since then her productions have dealt with asylum-seekers, the sufferings of Cambodia and other hot-button issues, as well as classics by Aeschylus, Euripides and Shakespeare, in stylized versions strongly influenced by Asian dramatic tradition. Although Mnouchkine, daughter of the Russian-Jewish film producer Alexandre Mnouchkine (1908 – 1993), has worked consistently with French author Hélène Cixous (born in Algeria to a German Ashkenazic Jewish mother and an Algerian Sephardic Jewish father), who produces highly literary texts for acting, this latest Théâtre du Soleil show is an exception.

Titled “Les Éphémères” (“Ephemeral Things”), the show, which played at the Park Avenue Armory’s immense Wade Thompson Drill Hall, is based on improvised scenes developed over many months during an intensive series of ongoing rehearsals rather than a text by a single author. Some vignettes are mere dramatic situations, such as when a deluded old woman explains to a doctor that her physical symptoms must mean she is pregnant; the most moving such episode is when a young Jewish girl, after reciting a Hebrew prayer for the Sabbath, is taught a Christian prayer to better conceal her religious identity during the Nazi occupation of France.

Although this scene is fictional, as Mnouchkine explained to me backstage during the evening show July 17, it is based on what really happened to French Jews at the time. We chatted in an improvised backstage office area, while her youthful staff dealt with the heavy clerical chores involved in maintaining a tour company of several dozen actors, ranging from children to the elderly. Mnouchkine’s abundant mane of gray hair, reminiscent of the late Bea Arthur (“The Golden Girls”), has deceived some critics to describe the woman as motherly or even grandmotherly. Yet Mnouchkine is no cozily humorous “Golden Girl.” Garbed in sweatshirt and sports shoes, her strong shoulders bowed in the humid July heat, she looks like a charismatic, grittily determined sports coach, guiding a championship team through a marathon season.

As part of her research for “*Les Éphémères,” *Mnouchkine visited the French National Archives, where she read how, in 1944, her paternal grandparents, Alexandre and Tamara Mnouchkine, were deported to Auschwitz from Paris and were murdered. A wanted list of people subject to Nazi arrest also bore the names of their son Alexandre, his British wife and little Ariane, who all managed to survive in Bordeaux until the war ended. To this day, as Mnouchkine states in “L’art du Present” (“Art of the Moment,” Plon, 2005), a book of interviews with French critic Fabienne Pascaud: “Although I lack Jewish culture per se, I feel Jewish every time someone does something terrible to a Jew, or when a Jew does something terrible. This means almost all the time.” Tellingly for someone lacking in Jewish culture, her theatrical creativity was inspired by a childhood reading of the book of Genesis, as she explained on a 2007 blog for the French newspaper Libération: “I never believed that Genesis was completed. As a little girl, I even believed that once I grew up, I would absolutely be invited to join its progress… I still believe that.”

Could shared Russian-Jewish ancestry have drawn her to avant-garde theatrical colleagues? She shares deep thematic interests with British director Peter Brook, longtime resident in France, and Arnold Wesker, whose 1957 play “The Kitchen” became one of Mnouchkine’s earliest hits when she staged it as “La Cuisine” in Paris in 1967. Mnouchkine demurs, implying that the influence of any such shared roots was subliminal at best: “I don’t have that strong sense of cultural ethnicity. Surely there’s a relationship to [our shared] culture by which we could have been influenced by a mutual history, but when I staged [“La Cuisine”], I didn’t even know that Wesker was Jewish.”

Despite her lifelong individualism, Mnouchkine has joined repeatedly with groups of likeminded people for good causes, such as last year, when she, along with Elie Wiesel, Claude Lanzmann, Bernard-Henri Lévy and others, signed a letter of support for Philippe Val, editor of the humorous weekly newspaper Charlie Hebdo. Val had fired a veteran cartoonist, Siné, after the latest in a series of what Mnouchkine describes as “reiterated antisemitic comments.” Mnouchkine added: “We have a law in France, unlike your First Amendment in America, which states people are not allowed to say things that are racist, sexist or antisemitic. It troubles me when calls for murder are supported in the name of freedom of expression.”

Siné’s latest “joke” was to claim that French President Nicolas Sarkozy’s son Jean would convert to Judaism in order to marry a rich Jewish girl and “make his way in life.”

Although an opponent of many of the elder Sarkozy’s right-wing policies, Mnouchkine nevertheless felt that Siné was continuing in the line of his notorious 1982 radio interview after the terrorist bombing of a synagogue in Paris’s old Jewish neighborhood of le Marais, when Siné stated unambiguously: “I’m an antisemite and not afraid to admit it, and from now on I’m going to paint swastikas on every wall… I want every Jew to live in fear, except if he is pro-Palestinian. Let them die!” In France, however, Mnouchkine and other objectors to Siné were the ones who endured the brunt of public criticism instead of the cartoonist himself, and even some French Jews felt Mnouchkine et al. had overreacted.

Mnouchkine’s actions, for her part, are diametrically opposed to the stereotype of the French-resigned shrug. In a 1995 public speech at the Avignon Theatre Festival, she revealed: “Sometimes I think that my father would not have found political asylum in today’s France. I cannot live in a Vichy government, which I feel we are approaching, and no reaction has been forthcoming.” Today, she tells me, France’s way of dealing with foreigners has worsened: “The immigration situation has not been arranged. I never said that every single immigrant should be given papers immediately. It’s simply not possible. It’s a Europe-wide problem, and currently the right to asylum is simply not being respected in France.” As Judith Graves Miller points out in her well-researched study, “Ariane Mnouchkine” (Routledge, 2007), many of the director’s recent projects stem from an intense empathy with the suffering of refugees, linked to her own family history. Shows about trampled rights in Cambodia, India and Africa share a deep concern for the victims of man’s inhumanity toward his fellow man.

Of these expressions of empathy, perhaps the most daring was in 2005, when Mnouchkine founded the Aftaab Theatre, an acting troupe in war-torn Kabul, Afghanistan (the group’s name means “sun,” or *soleil *in the local Pashto language). Currently honing their art with her colleagues in Paris, Mnouchkine’s young Afghani troupe members are eager to return home and restore culture to their homeland: “They’re very courageous,” she said, beaming with admiration. Even more, they are dazzlingly athletic, zesty, and dynamic, as can be seen in YouTube excerpts of their productions of “Romeo and Juliet” and other classics.

Mnouchkine has stated repeatedly that she lives “in the present, and only the present matters” to her. Still, her future looks especially crowded. In September, actress Liv Ullmann will present her with this year’s prestigious International Ibsen Award in Oslo, and later this fall, her latest production on an as yet unnamed subject will open in Paris. A new feature-length documentary film about Mnouchkine for the French-German cultural TV station Arte also will debut this fall. Last year, when Oxford University conferred upon her an Honorary Doctorate of Letters, a Latin oration described Mnouchkine as a “bright star, whose beams light up the French stage” (stellam nitidissimam, cuius radiis collucet scaena Francogalla). Yet, given her ever-increasing international reach, her star quality has clearly gone global.

For a video excerpt from Les Éphémères, see [this NY1 review]( http://www.ny1.com/content/ny1_living/theater_reviews/102027/time-out-theater-review—-les-ephemeres-/Default.aspx](http://www.ny1.com/content/ny1_living/theater_reviews/102027/time-out-theater-review—-les-ephemeres-/Default.aspx ‘this NY1 review’).