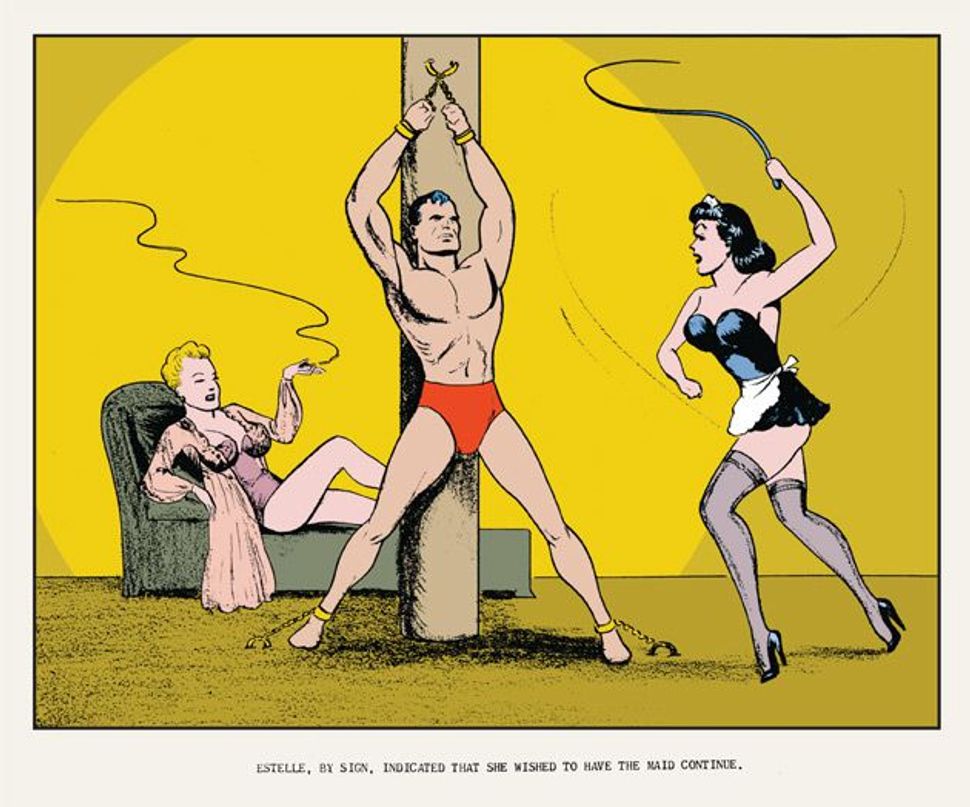 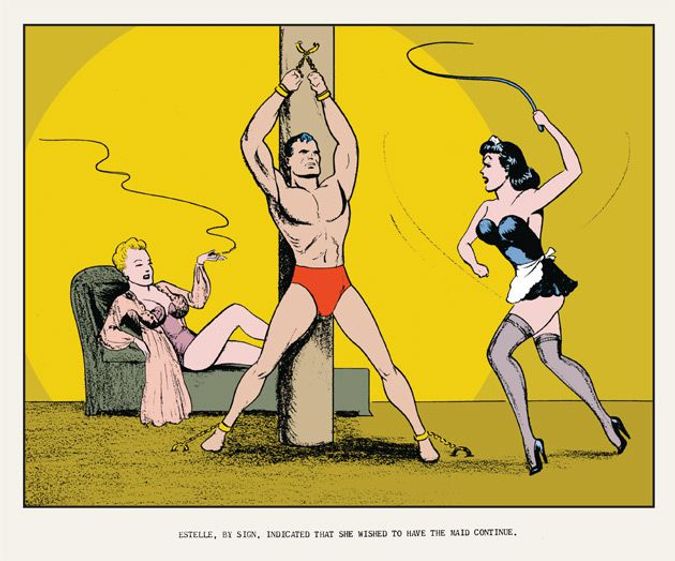 Who knew that Joe Shuster (1914-1992), the Cleveland Jewish teenage artist of the Depression Era, rising from obscurity through his portrayal of The Man of Steel, would become in later life a soft-porn artist? Not me, and surely not those other kids, mostly male, who grew up reading the Super-franchise heroes while developing mild fantasies about a very chaste Lois Lane.

Editor Craig Yoe has been busy for years collecting and publishing odd comics, a large dose of them in the barber-shop-pinup genre. He stumbled across a stack of old copies of the 1950s “Nights of Horror” in a used bookseller’s stall, and immediately recognized the artist’s style, muscles and all. The resulting book is only a selection, but maybe as much as we want to see.

It’s not how we want to think of Superman or his creator, but as an insight into another facet of a favorite artist, the book has a bizarre appeal. In this way, it’s akin to the current exhibit of Mad magazine artist and Christian fundamentalist Basil Wolverton’s work in Manhattan or something you might find at an obscure stall at the San Diego Comic Convention at the end of July.

Many covers of pulp magazines of the 1920s to the ’40s, as well as those of so-called “Good Girl” comics (Sheena, Queen of the Jungle among others, barely clad, fighting a predatory beast or man) or even of crime comics, were pretty daring and sometimes ghastly in their own borderline-raunch way. The undisguised porn comics known popularly as “Tijuana Bibles” were, however, a different matter altogether, sold from the backs of trucks or outside military bases, comic art with genital organs vividly on display and often featuring copyright-infringing mainstream funny-pages regulars from Blondie to Joe Palooka, or Hollywood stars like Jimmy Durante and Sonja Henie.

New York, including a murder case in 1954 with Brooklyn “thrill killers” purportedly egged on by this obscure publication. Actually, Fredric Wertham, pop psychologist and crusader for comic book censorship, carried a set of “Nights of Horror” issues to the cell where murderer Jack Koslow, known as “Boy Hitler” was being held, asking Koslow whether this was “the sort” of material that inspired his savagery. The boy assented. Wertham could likely have brought 100 other items and received the same satisfying response.

The case grew vastly larger than the magazine itself. Eventually, after copies for newsstand sale (mostly in brown-wrapper disguise) were seized by New York City Mayor Robert Wagner’s vaunted crime fighters, a Manhattan bookstore took the case all the way to the Supreme Court, which passed a 1957 censorship ruling. Hugo Black and William O. Douglas dissented from the decision, a dissent that suggests, at least in retrospect, that the era of banning and burning was on the way out. If, as charged, the bookstore in question really was connected with the pornography industry’s “Sultan of Smut,” Eddie Mishkin, we also may mark an odd and potentially embarrassing sort of continuity in ethnic enterprise.

Not to put too fine a point on a touchy matter, the American skin trade has owed a lot to Jewish ingenuity. At the time he began publishing Superman in the 1930s, Harry Donenfeld produced racy pulp magazines with garish, violent and sexually suggestive covers. (According to rumor, Donenfeld earlier also had published illegal birth control material for Margaret Sanger.) During the decades since the 1957 Supreme Court decision, the adult film and magazine business had a well-documented record of grandly successful Jewish participants, from pulp publishers, film producers and performers to sex-shop entrepreneurs. Then again, it would be no less true that Hollywood’s breakthroughs in sexual realism along many avenues of expression owe heavily to Jewish machers. In the world of mass culture, exploitation has opened the gates to art as well as vice versa.

How poor Shuster got caught up in the low end is the saddest tale of all. He and collaborator Jerry Siegel (1914-1996), the scriptwriter, early in their careers signed off all rights to Superman and were legally swindled by the big shots of the comics industry. Innocently, they never considered that the bosses would first hire competing artists and scriptwriters and then replace the creative pair entirely. Shuster and Siegel launched a decades-long legal suit, received a good percentage of royalties from the newspaper version while it lasted and for those few years did very well. In the long run, they got only a tiny share and reached a formal settlement only in old age, by which time Shuster was a pathetic, near-destitute character on the streets of Miami Beach.

Thus “Nights of Horror” and Shuster’s own secret identity. Shuster had hacked out comics anonymously or under assumed names in earlier days, so in that sense his anonymity was nothing new. The poses of these sado-maso characters are mild indeed for the 21st century. Some characters appear to be enjoying themselves! Their most striking feature indeed is how closely they seem to resemble the cast of the original. The Supe and Lois, or personages who look an awful lot like them, finally have sex — but definitely of an odd sort, and not as the icons we knew and loved. A case could be made that the plots are really the other side of the famous “truth, justice and the American Way.” Perhaps a sexual underground of consenting (or semi-consenting) adult activity is necessary, after all, to keep public morality steady. The bodies on display, male and female alike, are hardly ever less than perfect (though admittedly, the males have no nipples). Whatever they are up to, they somehow gain self-definition doing it.

What do we learn from comic art images of women with whips, lesbian love (for male viewers presumably), assorted tortures and an excessive number of muscular buttocks, male and female? One wonders. One also wonders also if Shuster wondered at all. Possibly not. After he had been cheated out of a fortune, he took consolation from receiving a paycheck for creating familiar figures. This volume offers us a remnant of something as strange as it is repellant in American popular culture. Abominably produced, with diction errors and misprinted images, “Nights of Horror” could not have had much of an audience. But in a sense, it was the 1950s precursor to the next generations of adult magazines, films, DVDs and now Internet downloads, each new mode of distribution colonized and developed by porn.

One more thing: These S&M types, leaving aside certain zaftig qualities, don’t look any more Jewish than the characters of Superman comics. They don’t talk or act as identifiably “Jewish.” It probably never would have occurred to Stan Lee, magnum figure of the industry and a player in the super-success of Hollywood’s adaptations, to recall this detail in the book’s introduction as he mourns the fate of Cleveland boy wonders Shuster and Siegel. For our part, though, we can’t help mulling a bit, as always, that an industry created by Jews made a grand success by offering the gentiles a view of themselves working by day with superpowers but relaxing at night, getting beaten in the basement.

Paul Buhle has edited 10 volumes of nonfiction comic art. His most recent volume (with Denis Kitchen) is “The Art of Harvey Kurtzman: The Mad Genius of Comics” (Abrams ComicArts), an illustrated biography of Mad magazine’s founder.