Jewish attitudes about sex and sexuality span a wide spectrum. For liberal Jews, sex and religion may seem unrelated; for those who follow the family-purity laws, the relationship between sex and Jewish tradition may seem set in stone. But neither of these stances takes the whole picture into account. Judaism, as Rabbi Danya Ruttenberg writes in the introduction to “Passionate Torah,” is both an earthy religion of the body and a distressingly patriarchal institution. “Jewish sexuality,” she writes, “is nothing if not complex.”

In the past few decades, postmodernism, feminism and queer liberation have changed the way sexuality is understood and discussed across the board. “Passionate Torah” brings all these to bear on the Jewish conversation about sex.

Taking a page from Martin Buber, Ruttenberg organizes the anthology into three sections: “I-It: Challenges,” “I-Thou: Relationships” and “We-Thou: Visions.” The essays focus first on problems, then on connections and finally on visions of the future.

Anthologies can seem like grab-bags. This tripartite organizing principle helps give “Passionate Torah” coherency, but the tone of the essays still varies. On my first reading, I found this frustrating; on my second read-through, I decided it was a plus rather than a minus, because it offers readers a variety of ways in. This is a book best read in small doses.

The essays are grounded in traditional texts, and each comes with footnotes. For some readers, the footnotes will be a source of pleasure; others may find them overly dense. Regardless, the texts give the writers’ arguments heft.

Sarra Lev’s exploration of Tractate Sotah (a tractate of Talmud that explores questions of female infidelity) subjects it to the scrutiny of film theory, particularly the theory of the gaze, and pushes the reader to grapple with the question of whether Sotah constitutes rabbinic pornography. (Short answer: Sure looks that way.)

For me as a rabbinic student interested in gender, sexuality and our communal boundaries, this is fascinating material. For someone who isn’t as invested in wrestling with the texts, or in these particular questions, the essays might not hit home.

By the same token, Forward columnist Jay Michaelson’s essay “On the Religious Significance of Homosexuality” explores kabbalistic understandings of masculinity, femininity and the divine. If you already enjoy stretching your brain into the acrobatics of classical Kabbalah, this essay is for you. If you don’t, you may find yourself skimming until you reach his closing assertions about why sexuality matters.

The more personal essays are more universally accessible. Rabbi Haviva Ner-David offers an interpretation of the traditional categories of tumah (ritual impurity) and taharah (ritual purity), reflecting on how she relates to her own oscillation between the two states.

“This is especially compelling for me when I am trying to conceive,” she notes. “When my period comes, I turn inward… I need my space to grieve, and that is what I get — days and days of tumah space.” And then, when the time comes to return to taharah, the mikveh immersion allows her to wash away the grief. This may not inspire me to take on the family-purity laws, but it offers me a new way of understanding them.

My favorite essay in the anthology is probably Ruttenberg’s ”Toward a New Tzniut,” which explores questions of body and modesty. Many women today see traditional modesty laws as a patriarchal attempt to control women’s bodies and thereby our sexuality. Ruttenberg puts forth a case for a more nuanced understanding, though she’s conscious of tzniut’s problematics.

On her first day of rabbinic school, she writes, a male colleague ran his finger up her arm and noted that she’d better cover up. (That the gesture itself is a creepy sign of unconscious male entitlement to women’s bodies doesn’t escape her, but she doesn’t dwell on it.) Classical texts argue that it’s a woman’s job to protect men from her potentially arousing form; can these arguments be redeemed or reclaimed?

If any of this startles you into thinking, “This isn’t what I expected,” the book is doing its job. These essays were chosen to expand the reader’s sense of what Judaism has to say on the subject of sex. Our understanding of Jewish sexuality needs to become as complex as the realities are. And as our understanding evolves, we become aware of new questions to pose to the tradition.

Rachel Barenblat, an ALEPH rabbinic student, holds an MFA from the Bennington Writing Seminars and blogs as The Velveteen Rabbi. 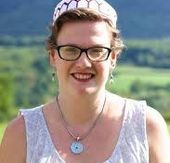