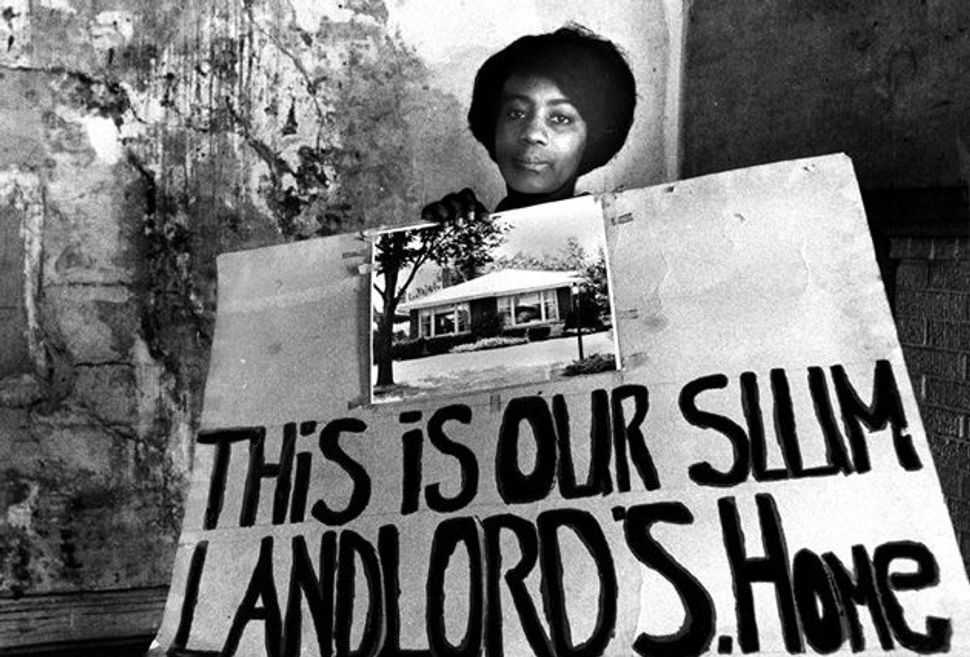 Juxtaposed and Unequal: Rosa Downing showing a photograph of the home of her landlord, L. J. Epstein, along with the living room wall of her apartment. Image by AS PUBLISHED IN THE CHICAGO SUN TIMES LLC. REPRINTED WITH PERMISSION

The search for the absent father — whether he’s literally or emotionally absent — is a pervasive theme in theater, books and film. Rarely, however, does an author inject this theme into a work of scholarship, as Beryl Satter has in “Family Properties: Race, Real Estate, and the Exploitation of Black Urban America.” Satter’s approach makes a lot of sense. She began to explore racist real estate practices in Chicago after she read her father’s papers detailing his efforts to defeat these practices in the 1950s and ’60s. This never-resolved creative tension between the personal and the academic animates Satter’s book.

Satter barely knew her father, Mark Satter, who died when she was 6. Mark Satter spearheaded early efforts to fight these unjust real estate practices, which thrived, in part, because the Federal Housing Administration refused to insure mortgage loans to many blacks. For years, the FHA turned down requests in black neighborhoods because the loans were considered too risky — but, at the same time, the agency refused to insure mortgages for black families who wanted to live in white areas.

Into this mortgage vacuum stepped speculators, who ran the following unscrupulous, albeit legal, scam: They bought properties in Chicago’s black areas, jacked up the prices and then sold to black families “on contract.” In most cases, if the family missed a payment, the agent/speculator could evict the family and then resell the property. The speculator usually owned the property, although the buyers didn’t know this crucial detail.

The results of contract selling, a version of the installment plan, devastated black families. Forced to pay inflated prices, many blacks missed a payment or two and lost their homes. Furthermore, as the neighborhoods deteriorated, the owners of these properties would simply abandon them, exacerbating urban blight. As Beryl Satter, a professor of history at Rutgers University, puts it, “While contract sellers became millionaires, their harsh terms and inflated prices destroyed whole communities.” One of these communities was Lawndale, a Chicago neighborhood that, like so many urban American neighborhoods, became less Jewish, increasingly black and more rundown in the postwar years.

Lawndale’s once Jewish character is only part of the Jewish nature of the tale. As in David Kushner’s recent “Levittown,” Jews played vital roles on both sides of the equation. Mark Satter was the son of Jewish immigrants; several of the landlords were Jewish, too. In one of the compelling details of the story, Satter himself owned several properties in Lawndale, although he never engaged in discriminatory speculation.

The Jewish aspects of the story remain mostly in the background, apart from a discussion of the liberal Jewish community’s support for efforts to end contract selling. Beryl Satter tells, instead, a muckraking tale featuring slumlords out to make a buck and the black families they exploited — and how activists, beginning with her father, attempted to change the laws that allowed for this exploitation.

In the first half of the book, her father’s efforts take center stage. Mark Satter was a left-leaning attorney who was not only investigated by the FBI for his political leanings, but also unsuccessfully recruited by J. Edgar Hoover’s group to turn informant.

Unfortunately, the legal system worked against Satter — and against later activists — in his fight to change the system. His arguments that selling properties on contract to make a quick profit was unethical according to professional real estate and legal standards fell on deaf ears with juries and judges. Satter lost case after case and died of a heart condition in 1965 at the age of 49, leaving his family with little money, in part because the properties he owned in Lawndale had become worthless.

After Satter died, community activists increasingly took up his cause. Only when Chicago’s black residents themselves got involved and the historical tide turned in the late 1960s, however, did these policies begin to change. Two pieces of national legislation — the Home Mortgage Disclosure Act and the Community Reinvestment Act — passed in the 1970s, helped, as well, although the landlords themselves rarely paid for their wrongs.

Beryl Satter uses her history to shed light on a few larger debates. She links, for instance, the unscrupulousness of the real estate speculators to the excesses of lenders in the recent subprime mortgage crisis. In both cases, mortgage granters used legal means to prey on unknowing borrowers, and in both cases, minorities were more likely to be the victims.

Satter’s juxtaposition of the personal and the political in the first half of her book enriches both stories. But once her father dies, the book becomes a more standard history. She appears to be more comfortable writing political and social history than delving into how her exploration of her father’s life changed how she felt about him. Maintaining the thread about her father throughout “Family Properties” would have made the book, a thought-provoking contribution to recent urban history, more emotionally satisfying.