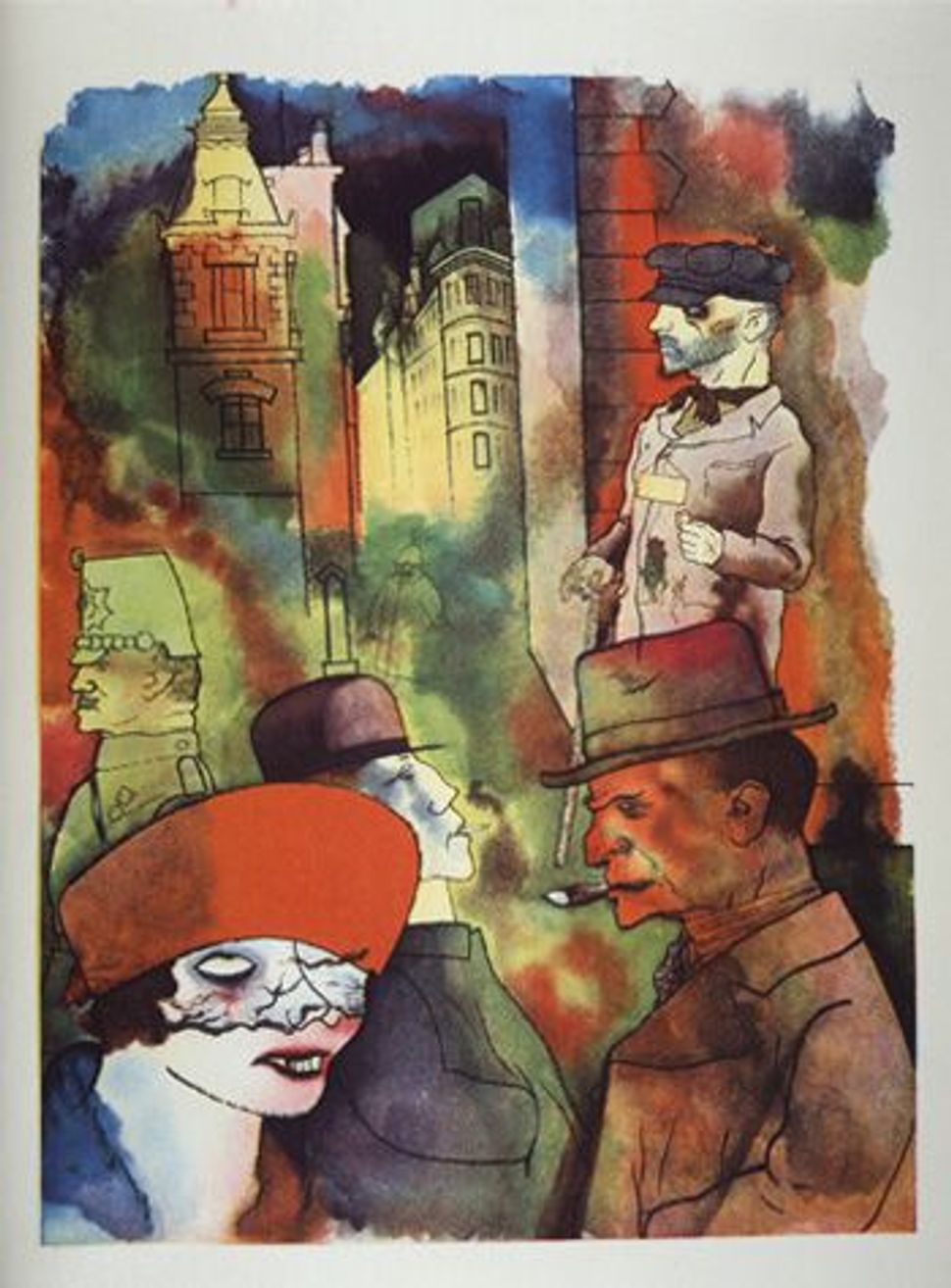 Banned by Weimar: George Grosz?s anthropological watercolors displayed Alexanderplatz in all of its seamy detail. Image by © ESTATE OF GEORGE GROSZ/LICENSED By VAGA, NEW yORK, Ny

In the vast graveyard that is Europe, there lies a sacred plot reserved for the Weimar Republic — Germany’s bright but stillborn sanctuary for liberalism, libertinism and a host of other projected freedoms. 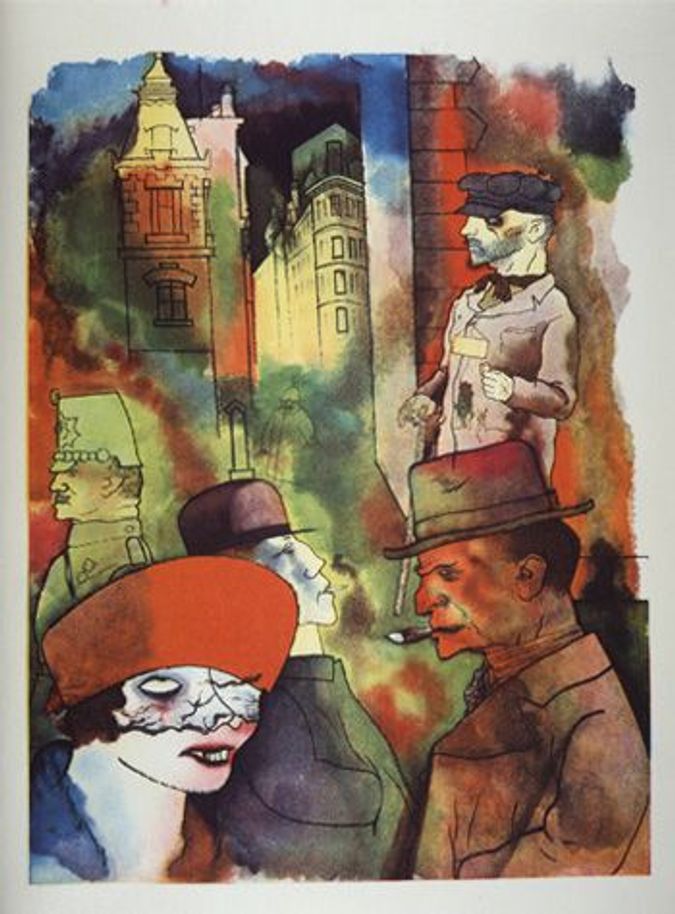 Banned by Weimar: George Grosz?s anthropological watercolors displayed Alexanderplatz in all of its seamy detail. Image by © ESTATE OF GEORGE GROSZ/LICENSED By VAGA, NEW yORK, Ny

Idealized, treated more often as an allegory than as a historical event, and celebrated as much for its exiles as for its resident geniuses, Weimar, and our obsession with it, testifies to our belief that this brief, interwar period represented a Bildungsmoment in German history. A republic that strove onward in the shadow of various oppositions, favoring culture over barbarism until the darkest elements finally overwhelmed the brightest and best.

The so-called Weimar spirit has also served as a haven for liberal historians who, flitting between the two World Wars, can’t help but perch on the ledge of the years spanning 1919 to 1933: If Berlin — its capital at that time — was the postcard city of Walter Ruttmann’s “Berlin,:Die Sinfonie der Grosstadt” (“Berlin: Symphony of a Great City,” 1927) and the mortal setting of Siegfried Kracauer’s “Die Angestellten” (“The Salaried Masses,” 1930), it was also the immortal Berlin of Christopher Isherwood’s thinly veiled novelizations of the early 1930s; not to mention Peter Gay’s inescapable pamphlet, “Weimar Culture: The Outsider as Insider,” or, indeed, Peter Jelavich’s latest study, “Berlin Alexanderplatz: Radio, Film, and the Death of Weimar Culture.”

Alfred Döblin, the author of the book within this book, was, along with Gottfried Benn and Arthur Schnitzler, one of the era’s most published doctor-writers. Born in the seaport town of Stettin (today Szczecin, in Poland), to a clothier who ran off to America, Döblin arrived in Berlin the fifth child of a single mother. After the First World War, he opened a practice near the Alexanderplatz — the Alex, for short — at that time populated by a common European miscellany of laborers, pimps and immigrant Jews from Russia. Like the Times Square of old, the Alex was both technologically modern and socially seedy, leading Döblin to characterize his occupation as “social worker” with medical expertise.

Döblin’s masterpiece “Berlin Alexanderplatz,” first serialized in the Frankfurter Zeitung, begins with the protagonist’s parole and ends with an ominous call for social uprising and war, as well as a fainter plea for responsibility. “Keep awake, keep awake, for there is something happening in the world,” as it appears in Eugene Jolas’s vividly antiquated translation. “The world is not made of sugar. If they drop gas-bombs, I’ll have to choke to death; nobody knows why they are dropped, but that’s neither here nor there, we had the time to prepare for it.”

Buoyed by high expectations, and finally deflated by them, the sequel that Döblin envisioned never materialized. Instead, he was beset by the challenges of adapting the novel for radio and motion picture, and obsessed with his epic retelling of the November Revolution, in which Karl Liebknecht and Rosa Luxemburg perished, ultimately published in three volumes as “November 1918.”

“The Weimar Republic was an idea seeking to become reality,” Gay wrote. “The Weimar style was born before the Weimar republic,” which, paradoxically, “created little; it liberated what was already there.” Later, this newfound freedom, like cosmopolitanism or the inflation, would be blamed on the Jews — which many of Weimar’s luminaries were — at a time when the foreign minister’s name, Rathenau, naturally suggested Judensau, or Jew-pig, to the German ear: “Knallt ab den *Walther Rathenau, Die Gottverdammte Judensau*,” they sang. This fact is not lost on Peter Jelavich, author of “Berlin Cabaret” and “Munich and Theatrical Modernism,” who portrays the Alexanderplatz phenomenon as the story of how a book skeptical of a hyper-mediated culture came, itself, to constitute merely more media hype. The cheap “entertainment,” as Jelavich calls it, came at a time of mounting right-wing intimidation and lawlessness — all of which sealed the death, as early as 1931, of his subject, “Weimar culture.”

But what he and his colleagues consider relevant media criticism is merely the most contemporary version of the individual conscience clashing with what is called, for lack of a better word, Modernity.

Döblin published “Berlin Alexander-platz” in the fall of 1929. Elias Canetti had come to Berlin from “provincial” Vienna the previous summer and, in the span of several weeks, he claimed to have met every important person there, including Isaac Babel and George Grosz — the decade’s eminent emissaries of violence. Indeed, “Berlin Alexanderplatz” reads, today, like a literary illustration of Grosz’s “Ecce Homo” which seemed to depict the full morphology of human sordidness in Weimar’s cultural capital. In Canetti’s view, something more essential than the celebrated “permissiveness” prevailed: namely, enthusiastic self-deception by which typical Berliners identified themselves with the characters of Bertolt Brecht’s “Threepenny Opera” and the idealized demimonde of the day.

It is appropriate, then, that Döblin represents the part of Germanophone literature that both comprehends and flaunts failure. Human stupidity, depravity, impotence and innocence are the cornerstone of his Alexanderplatz — both a district and a spiritual condition that ceaselessly “rebels, conspires, broods on the left, broods on the right, demonstrates, renters, landlords, Jews, anti-Semites, the poor, proletarians, warriors in the class struggle, profiteers, seedy intellectuals, small girls, demimonde, high-school teachers, parents’ associations, trade unions, two thousand organizations, ten thousand newspapers, twenty thousand reports, five truths.”

In the stenographic style of “The Story of Franz Biberkopf,” Döblin invokes his ideal of unliterary literature for a politically frenetic, anti-literary time — advocating a literal, materialistic Kinostil, or “cinema style,” redolent of the aesthetic then sweeping the arts.

“Take note of advertising and leave Stefan George and Rilke behind,” he wrote, even as Rainer Maria Rilke’s only prose work, the precocious novel “The Notebooks of Malte Laurids Brigge,” represented an influential, early foray into the experience of modern existence. Though his subject evolved from novel to novel through 18th-century China, the Thirty Years’ War and a strange alternate moral future, Döblin’s sociological curiosity always got the better of his plots — a tendency he was more than happy to indulge.

As if he never had gotten over being called an expressionist in his youth, the individual in societies both real and imaginary was what seemed to attract him to writing in the first place. Dostoevsky remained a conspicuous favorite. His “Crime and Punishment” and “The Idiot” seemed “completely unliterary,” consisting of “resistance, energy, revolution.” In other words, a kindred spirit.

Yet it was the ultimate failure of the Revolution of 1918 to bring about real change in Germany — and the ensuing civil war — that proved more demoralizing than the Treaty of Versailles in sowing a lasting divisiveness among the factions of the left and right, both of which grew steadily more radical as the economy unraveled. When it existed at all, criticism flourished in a hostile social environment: Weimar’s heroes toiled in virtual isolation among a populace deluded and impoverished enough to want ever more heroism and grandeur and myth — so runs the myth of democratic Weimar.

In fact, the celebrated Warburg Institute was very much an ivory tower, much as the socialists in Frankfurt or the artistic collective associated with the Bauhaus. In his novels, Döblin, with his dry sense of humor and ear for the Babel of Berlin’s rabble, attempts to reclaim these people as characters, applying fiction to exorcise the masochistic proletarian and right-wing elements of real life.

The “death” of the Weimar Republic predicted the death of Döblin himself, two decades and several continents later, following an unhappy tour of exile: Zurich, Paris, Hollywood, Baden-Baden. Golo Mann may have been right when he wrote, “In the turmoil of events in the twentieth century no nation is master of its destiny,” but claiming that the Germans were merely victims of their own history would have been too tragic and, ultimately, too flattering to the German myth that rationalized the failure of the Weimar experiment.

“To listen to this, and to meditate on it, will be of benefit to many who, like Franz Biberkopf, live in a human skin, and, like this Franz Biberkopf, ask more of life than a piece of bread and butter,” Döblin began in his best Hochberlinisch. Yet despite the best intentions of the German left in the interwar years, people came to accept distorted perceptions of change, though they were not as sincere, naïve nor fictitious as the hero of Döblin’s prescient picaresque: Their story is a cautionary tale of cultural shift at a crucial time. So long as free and democratic societies exist, we should not be surprised if they, like the Weimar Republic, continue to become monuments to maxims — living proof, for example, that the path to history is paved with good excuses.