At Davennen’ Leadership Institute, A Chance To Deepen Spiritual Experience 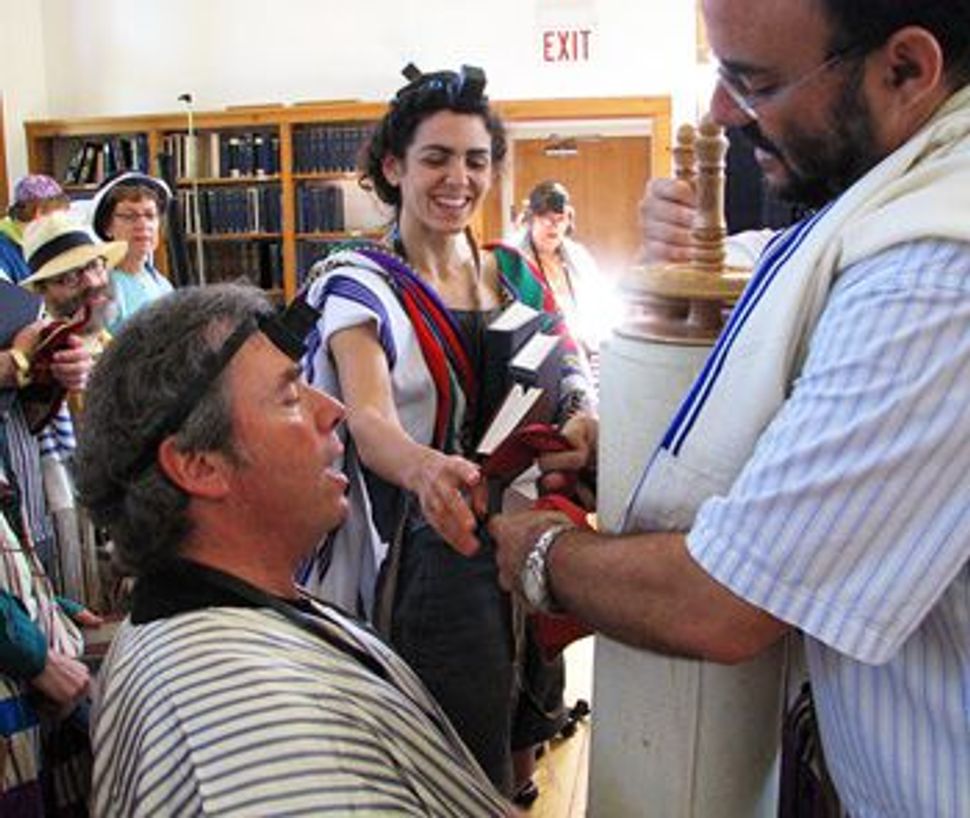 Securing the Scroll: Jeremy Parnes of Canada holds the Torah Scroll as it is being bound by Simcha Daniel Burstyn from Israel. Daria Jacobs-Velde from Philadelphia reaches in to assist. Image by © 2008 Janice Rubin 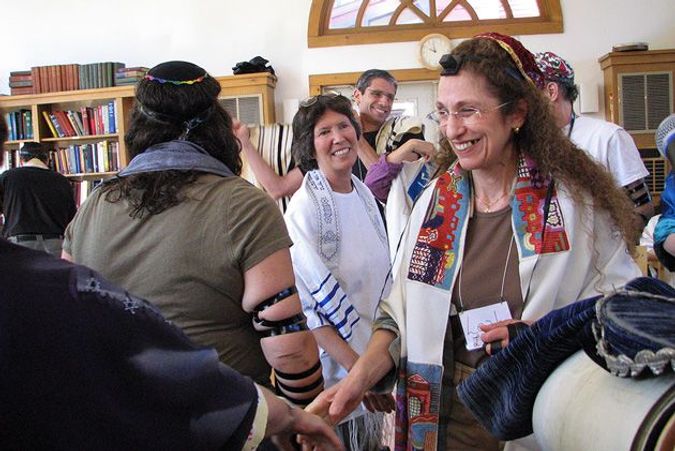 After the Reading: Leah Frey-Rabin of Frankfurt, Germany, center, reaches out to others who congratulate her on a beautiful reading of the Torah at a weekday morning service. Image by © 2008 Janice Rubin

Ask Rabbi Marcia Prager what a typical day at the Davennen’ Leadership Training Institute is like, and she won’t talk about the master classes, the skills sessions, the group work. Not at first. At first, she’ll start at the beginning.

“We wake up as the sun is getting up, molding our lives within the prayerful rhythm of the day,” she said. “People make their way to the synagogue. The mist is rising from the lake. The geese are beginning their calls. We are wrapped in our talleisim. A chant fills the shul.” 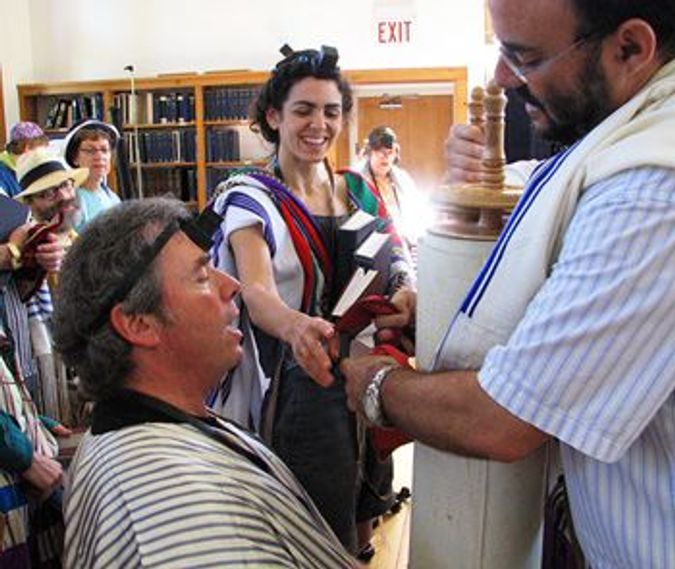 Securing the Scroll: Jeremy Parnes of Canada holds the Torah Scroll as it is being bound by Simcha Daniel Burstyn from Israel. Daria Jacobs-Velde from Philadelphia reaches in to assist. Image by © 2008 Janice Rubin

In a program that meets for four weeklong retreats during a two-year period, the institute seeks to strengthen the ability of rabbis, cantors and other members of the Jewish community to lead people in meaningful group prayer. Despite the institute’s emphasis on leadership, everyone is welcome, even individuals simply looking to deepen their own experience of prayer. Founded 10 years ago, the program received the Mintz Family Foundation’s annual award this year for creative Jewish education.

The philosophy of the program is that “even in those settings where there is a solo prayer leader, everyone needs to take their place as active creators, collaborative co-creators of the prayer experience,” said Prager, who co-founded the institute along with Rabbi Shawn Zevit.

Since one way for participants to become better prayer leaders is to start “deepening their own prayer lives,” according to Zevit, the retreats emphasize connecting spiritually and intellectually with all components of a prayer service — liturgy, chanting, history, even the way a person’s body moves during prayer.

The overall goal is to integrate prayer into every aspect of participants’ lives so that it “becomes not just an activity to do on Friday night, but an integral part of everything you do,” Zevit said.

Indeed, David Evan Markus, 36, came to the prayer institute two years ago as a lawyer with the New York State Legislature. Markus said that although he grew up going to synagogue regularly, “I always felt like I was doing the prayer, I wasn’t being the prayer.”

Practicing the profession of law takes a very rational approach, he said.

“You don’t realize how much you’re doing that until someone shows you another way,” Markus said. In July, Markus began his coursework to become a rabbi — a direct result, he says, of his experiences at the prayer institute.

Participants in the Davennen’ program come from the whole spectrum of Jewish life — from tiny, unaffiliated havurot to large Reform and Conservative congregations. The retreats, attended by about 50 students, are held in summer and winter at the Isabella Freedman Jewish Retreat Center in the Berkshires’ town of Falls Village, Conn.

Prager is the congregational rabbi at Jewish Renewal synagogues in Philadelphia and in Princeton, N.J., and director and dean of the ordination programs at ALEPH: Alliance for Jewish Renewal.

Zevit is director of outreach and tikkun olam and a congregational consultant for the Jewish Reconstructionist Federation.

Among the Davennen’ prayer institute’s more innovative practices are “davening labs.” After the morning prayer service, “People take their *talleisim *back out and we daven again, but this time in a master-class sort of format,” Prager said.

The instructors analyze, detail by detail, the service just completed. For instance, if you’re singing a song about joy, why is there not as much joy in your face as there is in the song?

A well-executed service, Zevit said, is “almost like scene after scene in a good play rolling into each other, [with] entrances and exits.” Moments of transition between one portion of the service and another … need not be “dead space,” Zevit said.

In the months between sessions, participants keep in touch online via a listserv. A few have even started a cyber-davening group, in which a regular morning minyan logs on to a video-conferencing Web site to pray and members practice what they’ve learned together.

Zevit and Prager are planning an additional opportunity for participants to practice — an “advanced week,” part reunion and part continuing education session, in 2010.

“People now want a place where they can come back, re-tune and have an opportunity to be raised up to be teachers,” Zevit said.

At Davennen’ Leadership Institute, A Chance To Deepen Spiritual Experience