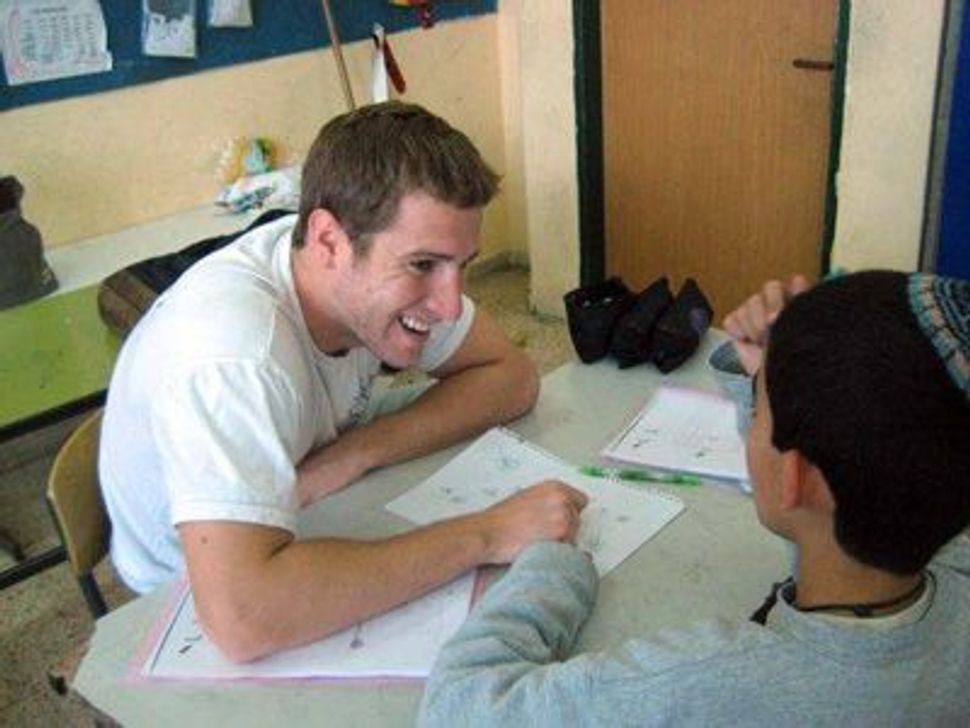 School Session: OTZMA participant Adam Resnik, left, has been teaching this summer at a school in Kiryat Malachi. Under the new teacher corps, participants will spend 10 months at one school.

Although visitors to Israel’s big cities see what appears to be a prosperous lifestyle, 40% of Israel’s children live below the poverty level, according to the Jewish Agency for Israel. Many of these underprivileged children live in the Negev region, where opportunities for a proper English education are sparse. 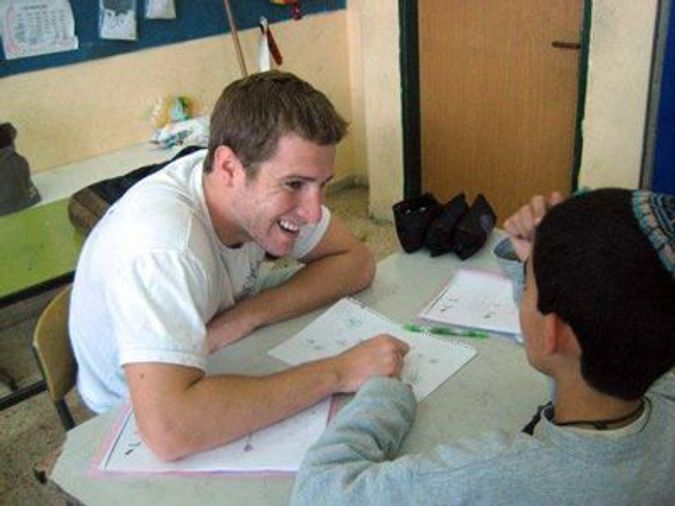 School Session: OTZMA participant Adam Resnik, left, has been teaching this summer at a school in Kiryat Malachi. Under the new teacher corps, participants will spend 10 months at one school.

A new program set to launch in September will send young Jewish Americans to teach English for 10-month sessions in schools in these areas.

The Israel Teacher Corps is a joint project of MASA Israel and OTZMA. MASA is Hebrew for “journey,” and MASA Israel sends young Jewish Americans to Israel for a semester or a year at a time to study.

OTZMA has been sending young people on service trips to Israel, some with short stints as English teachers. But the new teacher corps will be the first program to send participants to one school for a full 10 months.

On September 2, 20 young Americans between the ages of 20 and 30 will depart for a year of teaching in the Negev —and they will pay a fee for the opportunity.

Former Peace Corps volunteer Avi Rubel, the project’s founder and the director of North American relations of MASA, said: “When I looked at what was missing in the market [of Israel immersion programs], one of the things that came to mind was how successful Teach For America has been. I thought, why not do that in Israel?” For 19 years, Teach For America has been placing college graduates in two-year teaching positions in schools in low-income communities in the United States. Altogther, 24,000 participants have taught about 3 million students.

When Rubel first started searching for funding, he encountered significant resistance. The charitable organizations he approached felt that “young American Jews are too spoiled, that they want to get served more than they want to serve themselves,” Rubel said.

But Rubel disagreed and he persisted. Fueled by confidence in what he calls the Obama Generation, Rubel conceived of the Israel Teacher Corps as a way to present young people with a challenge. “One of the ways President Obama became popular among young people was to challenge them,” Rubel said.

Even though the Israel Teacher Corps advertised for only a short time, it received more than 200 applications for the 20 slots. All the participants have undergone a screening process that includes two interviews and a professional psycho-social evaluation. The project has a goal of sending 100 teachers a year to Israel.

“I saw an advertisement on the side of Facebook that said come spend a year teaching English in Israel,” said Maytal Rand, a 22-year-old from New Jersey who recently graduated from Rutgers University and has been accepted into the program. “I clicked it, and it led me to OTZMA.”

Rand has been to Israel several times to visit family and friends, though never to the Negev.

“I hope to learn more about the culture and the people and, through the experience, I’m sure I’ll learn a little bit more about myself,” she said. “I’m excited to get really invested with the community there. I’m excited to learn about a new place in Israel, but I’m a little bit nervous because I’m not so familiar with the area.”

To be eligible for the Israel Teacher Corps, applicants must have previous experience in education, be it Hebrew school or summer camp, and be Jewish by the Law of Return.

The program charges participants a base tuition of $9,000, but grants each teacher $4,500. Since those with financial needs may apply for additional grants of up to $3,000, participants wind up paying somewhere between $1,500 and $4,500. They pay their own airfare and daily expenses, but the program provides housing, health insurance and a cell phone.

“We want young Jewish adults to make a difference in the world anywhere they choose, whether it’s in Pittsburgh or in Africa. But there is a difference when you do it in Israel and that difference is that it’s more yours,” Rubel said.

Rand is eager to begin her teaching experience.

“Israel is not so much a place that belongs to me as a place I belong to,” she said. “I have tons of family there, and lots of friends. It’s like coming home again, without being in New Jersey.”