When American Judaism Was Yiddish 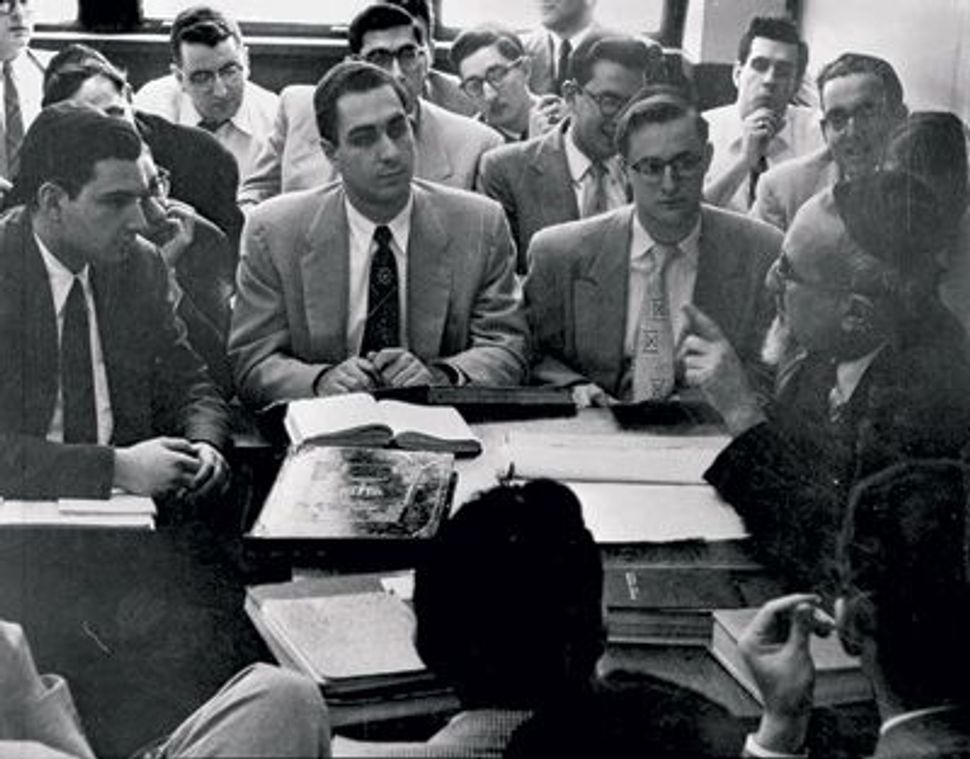 Soloveitchik?s Watershed: In 1960 he switched to English when he realized many of his students could not understand Yiddish. Image by COURTESY OF YESHIVA UNIVERSITY

There was a time when American Jews of very different ideological perspectives would talk, and listen, to each other. 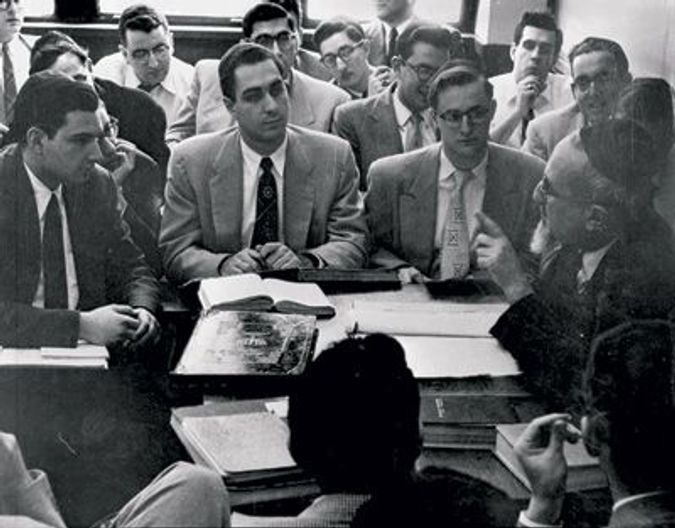 Soloveitchik?s Watershed: In 1960 he switched to English when he realized many of his students could not understand Yiddish. Image by COURTESY OF YESHIVA UNIVERSITY

One Sunday in 1949, Rabbi Joseph B. Soloveitchik, the leading Orthodox Talmudic scholar in America, addressed the Boston chapter of the outspokenly secular and leftist Workmen’s Circle/Arbeter Ring in Yiddish, the mother tongue of both speaker and audience*. The rabbi used his assigned topic, *tzedakah, as a springboard to discuss how the classical sources of Judaism addressed socioeconomic issues. He concluded by ruefully recalling his own youthful interest in pacifism — he had read Tolstoy, Romain Rolland, Franz Werfel, Stefan Zweig and the Yiddish writer Chaim Zhitlovsky — and explaining how the crimes of the Nazis made him appreciate the Torah’s wisdom in recognizing the need to combat and destroy those who spread ideologies of hate.

It is hard to imagine a leading Orthodox rabbi speaking to a secular Jewish audience — or a secular leader to an Orthodox audience — today, since the two Jewish worlds have moved so far apart. Orthodox Talmudists lack the breadth of secular education and cultural sophistication possessed by Soloveitchik, who had a doctorate in philosophy from the University of Berlin, and secular Jews have little familiarity with the Orthodox traditions that many in the 1949 audience still remembered from their grandparents’ homes. And even if they did remember them, Yiddish has long ceased to function as the lingua franca of Ashkenazic Jewry.

Soloveitchik’s talk 60 years ago might have been entirely forgotten if not for the publication of the original Yiddish text in this volume, along with transcriptions of several other of his Yiddish manuscripts that either appeared in newspapers or were delivered orally between 1949 and 1958, all expertly edited, with footnotes and an illuminating introduction (in Yiddish and English) by David E. Fishman, a professor at New York’s Jewish Theological Seminary.

Soloveitchik, who taught Talmud at Yeshiva University for more than four decades until illness forced his retirement in the mid-1980s, was the role model for the Torah U’Madah outlook of Modern Orthodoxy, which taught that involvement in secular concerns and an understanding of all spheres of knowledge (madah) was not only compatible with Orthodox Judaism, but also broadened and deepened its religious message (Torah). Since Soloveitchik’s passing from the scene, American Orthodoxy has turned increasingly insular and his legacy has come under question.

Some argue that Soloveitchik, for all his intellectual openness, was far more cautious about secular society and closer to traditional Orthodoxy than previously assumed. The issue is not easy to unravel, as the unsystematic nature of his thought, his tendency to assess issues from multiple perspectives and the continually changing circumstances that he addressed over a long public career make it hard to pin down his innermost convictions. These Yiddish writings and speeches give voice to considerable ambivalence on many matters.

A good example is his complex relationship with Zionism and the State of Israel. Soloveitchik affiliated with the non-Zionist Orthodox group Agudath Israel of America until World War II, when he shifted allegiance to the Religious Zionist movement. This volume picks up the story in 1949, a year after Israel’s creation, with Soloveitchik declaring that Israel’s victory in its War of Independence was a fulfillment of biblical prophecy. Over the next decade, however, he criticized the hostility of secular Zionism toward Jewish tradition and warned that nationalism divorced from the Jewish heritage was idolatry, even while he expressed doubts about the wisdom of legislating religious restrictions and advised the Orthodox elements in Israel to shift their energies to education from politics. He was a Religious Zionist, but hardly a conventional one.

This collection also provides invaluable information for historians of American Judaism, especially the 10-part series of essays reprinted from the Tog morgn zhurnal (the Forverts’ major competitor at that time), where they were published in 1954–55. Here we get Soloveitchik’s less than enthusiastic evaluation of the “religious revival” of the 1950s and his sober analysis of the effect of suburbanization on the synagogue.

He was particularly disturbed by changes in traditional practice made by the growing Conservative movement, such as mixed seating of men and women, the cantor facing the congregation and redefining of the role of the rabbi as august authority figure/master of ceremonies. He worried that Orthodox synagogues were adopting these changes, too. Soloveitchik believed that these innovations turned the prayer experience into a cheap ceremony and public spectacle. At the time, his words had little effect; today, ironically, not only Orthodox and Conservative congregations but many Reform, as well, have moved away from formal ceremonials and brought the rabbi down from the pulpit in an effort to promote personal, spiritual prayer.

This collection will evoke nostalgia among the dwindling number of former students who recall Soloveitchik in his prime, conjuring up for them a vision of the man and even the distinctive sound of his voice. It was through Yiddish, the language in which he felt most comfortable, that his rhetoric — by turns erudite, dramatic, plaintive, sarcastic and soaring — interpreted biblical and rabbinic sources; wove in philosophic, scientific and literary motifs, and drew contemporary lessons.

The 1950s marked the last decade in which Yiddish was widely spoken by American Jews. Symbolically, Soloveitchik switched the language of his class at Yeshiva University to English in 1960, when he saw how many of the students could not understand Yiddish. The next year he wrote a letter, appended to this book, suggesting that although Yiddish was not intrinsically holy, it maintained a degree of derivative holiness from its use as a language of Torah study and as the linguistic vehicle for ordinary Jews over the centuries to express their Jewish faith and loyalty.

For readers able to understand the Yiddish and attuned to the complex vision of its author, this volume will convey similar traces of holiness. Is it too much to hope that it also might encourage steps toward renewing respectful dialogue between Orthodox and non-Orthodox Jews?

When American Judaism Was Yiddish