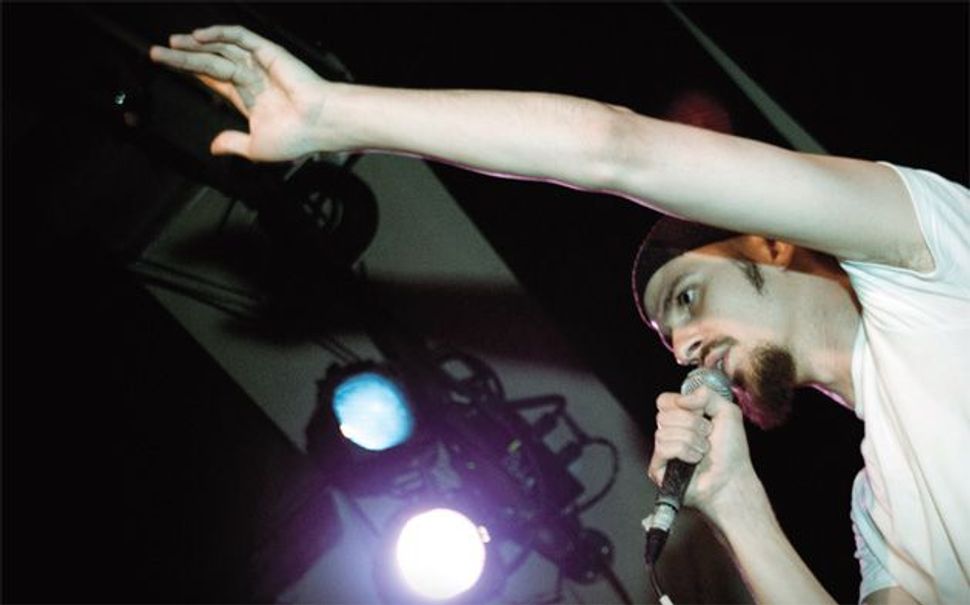 Under the Shadow of This Red Rock: Eprhyme, aka Eden Pearlstein, creates multi-layered rhymes with Hasidism and pop culture alongside kabbalah and klezmer. Image by David Kestin

Here’s what it’s not about: cute Yiddish puns, bar mitzvah kitsch, Manischewitz cocktails, or the novelty of a Jewish “insert unexpected form” (rap, reggae, whatever) star. Here’s what it does seem to be about: post-sacred-cow radical pluralism, pantheism, religious consciousness fused with social action, and an uncompromising and unimpressed blend of urban forms and neo-Hasidic spirituality.

This is Eprhyme, aka Eden Pearlstein, whose debut CD, “Waywordwonderwill,” hit stores in early September and was feted at a raucous hip-hop shindig in New York City’s East Village. But it is more than one rapper; he represents an ongoing phenomenon of Jewish culture that somehow is still, despite being at least a decade old, new.

What media and funders have largely missed about the so-called New Jewish Culture — and the reason that attempts to co-opt it don’t succeed — is its authenticity. This authenticity has an integrity manifested precisely in its mix-and-match multiculturalism: a particularism that thrives on interactions with the “outside.”

All these are present in Eprhyme’s music, but it’s the honesty that’s most striking. So much of Jewish communal life is about something other than what it seems: social status instead of worship, nationalism instead of community, marketing instead of culture, “outreach” instead of engagement. (They are not the same thing; are you engaged by missionaries of Jehovah’s Witnesses?) Eprhyme’s lyrics, music, politics, fans and record label all cut in the opposite direction — and through many layers of BS.

Lyrically, Eprhyme’s rapid-fire word salads are a humanist vision of spirituality fused with social engagement. Once upon a time, the sentiments on “Waywordwonderwill” might have been dismissed as idle raps of a naïve hippie — and only a few years ago, they were paired with only the cheesiest of guitar-driven folk tunes. But Pearlstein is not naïve; he’s naked and alone and trying to fix what’s broken. And his “Punklezmerap” is as cheese-free as a kosher pastrami sandwich.

There’s a lot of deceptive simplicity. Take these lines in “Pride and Prejudice”:

We have only been chosen for that which is within us
to give back to Who Knows One
Bring it all out in the open
Who do you love to hate
beside yourself, which is where it originates
the fallen state
make no mistake.

Within 10 seconds, Eprhyme (pronounced E-Prime) has railed against antisemites and Jewish ethnocentrists alike; referenced the Hasidic understanding that paradise, fall and redemption are all states of mind that can be experienced here and now; sampled another Hasidic teaching about the manifest world being the expression of the concealed unity of the Ein-Sof (Infinite God), and, just a few lines after quoting Billie Holiday’s “Strange Fruit” and Rodney King in the same song, insisted on a Jewishness that is proud but not prejudiced, combative of antisemitism but wary of elitism and patriotism.

Likewise, when rapping over sampled klezmer and hip-hop beats, Eprhyme states: “I’m a consciousness catalyst sent/to abolish establishment/and this is why/with every word I try/to unify earth and sky/bring about the renaissance of the Most High.” He brings together the kabbalistic concept of the yichud (unification) and a quasi-anarchist political sensibility, a postmodern musical aesthetic (DJ Spooky, aka Paul D. Miller, is probably the best source on the affinities between post-structuralism and hip hop) and, of course, his own personal vision. (Yes, it does go by pretty fast. It’s fun; it’s densely allusive.)

Musically, klezmer isn’t here because it’s clever; it’s here because Jewishness is in Eprhyme’s guts, as he raps on “Pride on Prejudice.” It’s as if these forms and languages seduce some of us even when we try to exorcise them, and we make them our own: not as a gesture of kitsch, but as an act of appropriation. Yet it is no coincidence that many of the songs on “Wayword” sample Muslim chants and Arab melodies, as well. Part of this is doubtless due to Eprhyme’s own interest in Sufism earlier in his life. But for the multiracial, multi-religious mono-generational audience the other night — Hasidim in semi-full dress, plenty of immodestly clad young women, a few African Americans in hip-hop clothing, as well as a whole lot of hipster Jews from a few stops down the L train — it was clear that the inclusive medium is part of the message.

To a previous generation, multiculturalism — particularly when it includes Muslim and Arab cultures — might have seemed at odds with fervent Jewish religiosity. This is still the rap against groups like the left-leaning J-Street: that they’re not Jewish enough, or proud enough. Well, nondual Jews like Eprhyme believe in their hearts that, in the words of the Hasidic masters, “Altz is Gott,” “All is God” (“It’s all God” is the title of one track), and that the kabbalistic unifications of hidden and manifest, Holy One and Shechinah (Eprhyme chants one such yichud on “My Mouth Is a House of Prayer”), also extend to unifying friend and foe, and crossing political boundaries with the same love that marks Eprhyme’s musical excursions.

I wonder: If the message our established institutions put out was, “The more Judaism, the more love,” would they have more or less success in reaching out to the Obama generation?

But all they seem to see is the surface. A neo-Hasid who raps! Let’s exploit him to get our kids to go to this party, and not intermarry! No, no, no. What Eprhyme offers, like Matisyahu and Y-Love and others before him, is a Jewishness that is part of a global polyglot of choose-your-own-adventure identities, musical and otherwise. This is a nontriumphalist, nondual Judaism that celebrates Jewish particularism precisely because of its place within a multicultural pluralism. “We’re all one but all different — that’s what makes us so strong,” as Eprhyme distills it.

Of course, what I’m calling exploitation, some might call good marketing. But I think there’s something deeper going on here. Eprhyme is signed to Shemspeed, the underground record label of Erez Safar (aka Diwon), but JDub Records — Shemspeed’s much wealthier older brother (making John Zorn’s Tzadik its eccentric old uncle) — has shown that it is possible to bring this culture to a wider, more mainstream audience, as well. When JDub co-founder Aaron Bisman suggested a few years ago that tomorrow’s Jews will get their Judaism as much in music clubs as in synagogues, he was seen as a radical, if not a crank. Well, tomorrow is today, and history has proved him correct. Jewish concerts and YouTube videos may not be a substitute for summer camp and yeshiva, but they have replaced shuffleboard, bagels and “Fiddler on the Roof” as markers of Jewish identity, well beyond the 718 area code.

More power to JDub — but I must say there’s a purity to underground cultures, a thrill of the new that is lost when they become too well known. While I like Matisyahu’s new work, especially his recent collaboration with the Crystal Method, I still remember that sense of excitement when I heard JDub’s pre-release version of his first album, prepping an interview for these pages — the first time he was covered in the media, I might add — back in 2004. “This is actually happening,” I thought, remembering Greil Marcus’s words about the beginnings of punk rock.

I felt the same way watching Eprhyme the other night. It was like going to a synagogue where people really want to daven — not just punch the prayer clock. They really mean it. This is it; it matters; it’s real. And for all JDub’s deserved success, it is amazing that Safar’s Shemspeed record label/promotion company/posse has managed to create a thriving underground Jewish music scene without a dime of philanthropic funding. It feels vital, alive.

Eventually, such cultures have to fade in intensity if they are to grow larger. It’s as if there’s a conservation-of-coolness principle: The wider the diameter, the thinner the depth. As Eprhyme says in “Face to Face,” “I used to talk a lot for free/Now I rock it for a fee/But it might be costing me.” Well, I hope not. Ten years into this “new Jewish culture,” and new faces, new sounds, new hybrids continue to emerge. It’s an exciting time to break boundaries.

Jay Michaelson’s “Everything is God: The Radical Path of Nondual Judaism” will be published in October.