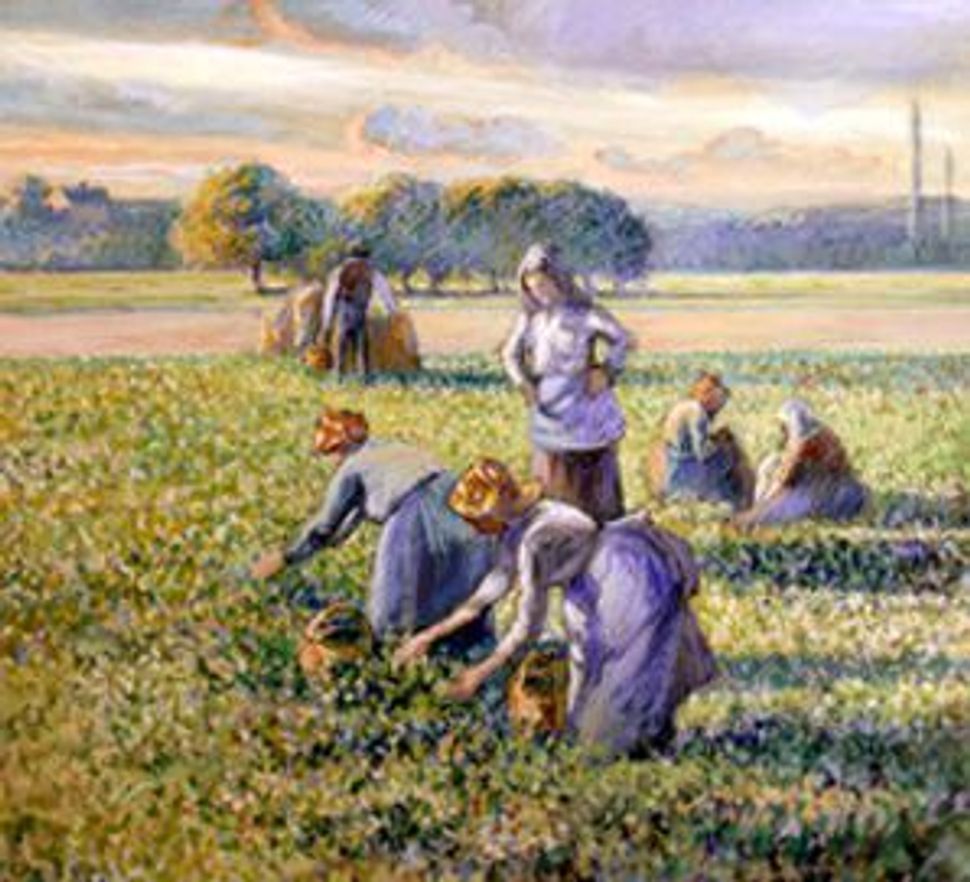 This fall, the Jewish Museum of New York is mounting its first show dedicated to Camille Pissarro, who founded the Impressionist movement and is its only Jewish artist. The museum’s previous showcases of his work, in 1995 and 1997, were significant events — the former an international retrospective said to be the first major exhibition in New York in more than 30 years, and the latter featuring a cache of newly discovered early drawings — but they traveled from other institutions. So how does one take a fresh look at this leading 19th-century figure? The answer, it seems, is by staying close to home. Camille Pissarro: Impressions of City and Country presents paintings and works, on paper, culled primarily from private New York collections. The show, on display from September 16 through February 3, 2008, features many works that have rarely been seen before. 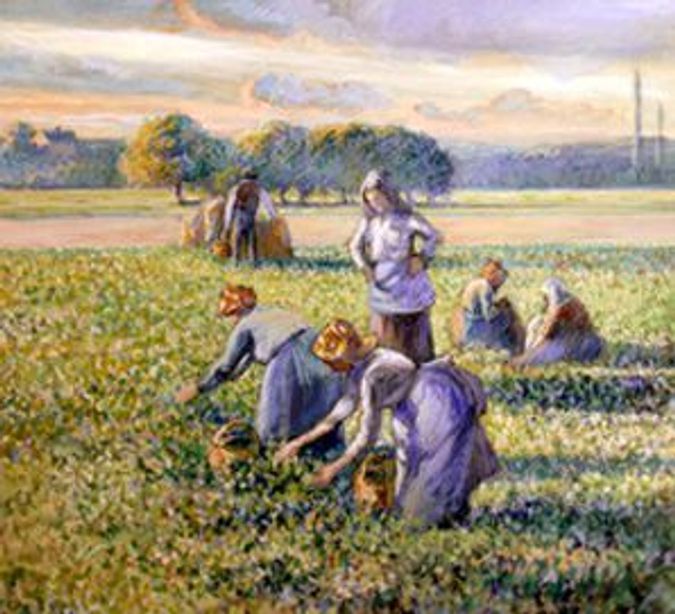 “There are amazing works of art not usually accessible to the public sitting in our own backyards,” said Karen Levitov, the associate curator who organized the exhibition, explaining her choice to focus on homegrown treasures. Over the course of two years, Levitov tracked down nearly 50 museum-quality works spanning Pissarro’s career, a trove that at once illustrates the richness of local collections — not many regions could supply such a survey — and offers a thoughtful, if not entirely new, perspective on the bucolic and urban scenes for which Pissarro is best known.

Seeing familiar depictions of laboring peasants and burgeoning metropolises through the lens of Pissarro’s radical sociopolitical ideologies, the show suggests that there was a direct link between the fierce individualism that Pissarro displayed in his life and in his art. While this territory has, as Levitov readily admits, been trod before, she maintains that this is the first major museum exhibition to focus on this aspect of the artist and explore it comprehensively. Levitov also goes further by fleshing out the significance of “the path”

as it appears in his oeuvre, making a case that this recurring motif is not only an important compositional element but also represents the artist’s journeys on numerous levels, from his travels between city and country to the development of his ideals and artistry. Whether her readings are welcomed or skeptically received, it is good to remind viewers to see these pretty pictures with critical eyes. It is easy to forget that now-beloved Impressionist works were, in their day, radical art shunned by the establishment

None of this is overt, but rather gleaned here in such works as the circa 1869 “Brook at Montbuisson, Louveciennes,” in which a peasant woman, barely discernible amid the leafy earth, leans over a stream that appears as a path across the front of the canvas — a classic example of Pissarro’s idealization of life amid nature as an escape from the conventions of the city. These themes are subtly woven throughout this chronological presentation, continuing with the 1875 “Winter at Montfoucault, Man Riding a Horse,” in which the subject journeys away from the viewer down a snowy road, and in urban scenes like the 1898 “Place du Théâtre-Français and the Avenue de l’Opéra, Hazy Weather,” where people of all classes converge at the juncture of grand boulevards. While the radical subject matter and technique — ordinary people depicted in vivid, roughly applied brushstrokes — were certainly informed by his sociopolitical attitudes, the show’s broader premises rely heavily on Pissarro’s personal identification as an anarchist and egalitarian.

Although Pissarro was decidedly unreligious, his unconventional upbringing in a traditionally observant Sephardic Jewish family helped shape his social conscience. Camille (whose Hebrew name, Jacob, appeared on his birth certificate) was born in 1830 on the Caribbean island of St. Thomas, into a prominent family that was active in the local synagogue. Nevertheless, the family was ostracized by the community because Pissarro’s father fell in love with, impregnated and married his uncle’s widow, whom he had come from Bordeaux to look after. Though the King of Denmark, who ruled the island at the time, eventually sanctioned the union, the family was never fully accepted. As a result, Camille and his siblings studied in a Protestant school primarily attended by children of black slaves.

From this, it seems, Pissarro learned to forge his own path, going further than his parents might have expected. At 18, he defied them by pursuing painting in Venezuela rather than joining the family business, and went on to marry the non-Jewish daughter of his mother’s cook’s assistant. Despite his haute-bourgeois background, Pissarro identified with the working class, referring to himself as a “bourgeois without a penny,” and he remained an outsider when he moved to Paris in 1855, as a Danish citizen, anarchist and Jew — albeit one who was totally nonpracticing. “He didn’t turn his back to Judaism but was against the idea of God or organized religion,” said Joachim Pissarro, the Museum of Modern Art curator and Hunter College professor who is a leading scholar on his great-grandfather.

Pissarro’s utter lack of interest in tradition comes through in surprising correspondence that was originally documented in a 1980 biography and referenced by the catalog accompanying the exhibition. In one letter, his father explains that Yom Kippur, a holy day in the Jewish religion, is approaching and he would like his son to join him for the holiday. (“It is as if he is inviting a gentile,” Joachim Pissarro noted wryly to me.) Later, when his own son, Lucien, seeks advice because the traditional family of the Jewish woman he wants to marry has demanded that he get circumcised, the artist is adamant that he must refuse to comply.

But these seemingly anti-religious sentiments were rooted in anti-authoritarian and humanitarian principles, as was his reaction to the antisemitism that stirred in France in the 1890s. Along with fellow Impressionists Monet and Mary Cassatt, Pissarro was an ardent supporter of the falsely accused Alfred Dreyfus, while Cézanne, Renoir and Degas supported the French government. Still, even when exposed to antisemitism — in a disturbing letter to Lucien, Pissarro relays the story of how he passed through a gang of ruffians who shouted, “Death to the Jews!” — he confronts it with mockery and disgust rather than feeling personally threatened. Even further, as the catalog notes, in Turpitudes Sociales, a series of satirical drawings from that time, Pissarro uses Jewish stereotypes for figures representing vices of the day. But scholars maintain that this merely reflected conventional and anarchist associations between Jewish bankers and capitalist corruption, noting that Pissarro was outspoken in his commitment to breaking down social hierarchies.

As Joachim Pissarro suggests, perhaps this is, ironically, the way his Jewishness is manifested, through his “profound commitment to freedom,” even if it meant freedom from Judaism. For David Stern, who is married to Joachim’s sister Lélia, an abstract painter, and runs the Stern Pissarro Gallery in London (dedicated to four generations of Pissarro artists), the strongest, if indirect, Jewish aspect is the closeness of Pissarro’s large family, evident in the intense correspondence that ensued whenever anyone left home. (Stern also notes that three of Pissarro’s five sons married Jewish women and that numerous descendants, while following in the artistic footsteps of the paterfamilias, returned to their more traditional Jewish roots.)

In any case, the only two “isms” to which Pissarro subscribed — anarchism and humanism — are, in the Jewish Museum show, the keys to understanding his work. There is ample evidence of beauty and innovation, not to mention the extraordinary opportunity to see such gems as “The Market on the Grand-Rue, Gisors” from 1885, which has never been exhibited anywhere before. But where Pissarro is concerned, however captivating the image, there is always more lurking behind the first impression.