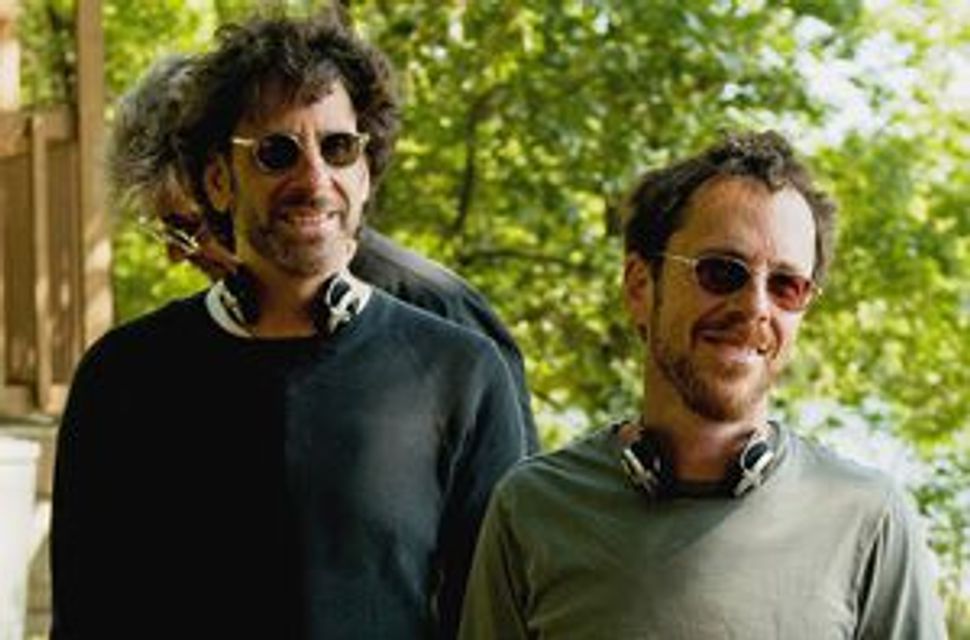 So Bright They Wear Shades: Joel and Ethan Coen directing a semiautobiographical film about their childhood era and location. 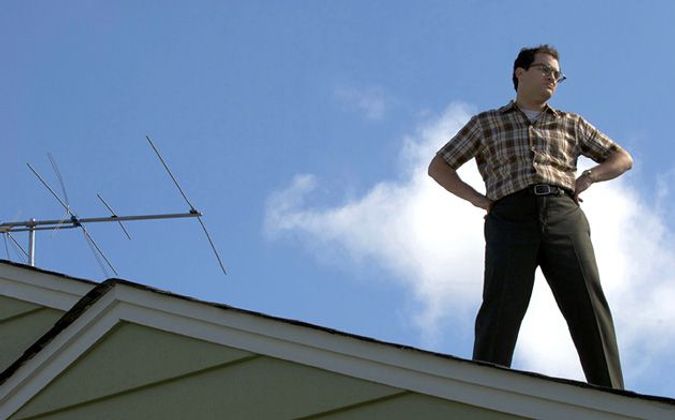 Physicist on the Roof: The film confronts the ambiva- lent nature of American Jewish identity. Image by PHOTOS COURTESY OF FOCUS FEATURES

They weren’t as bored and uninterested as they were when they won the best picture Oscar for “No Country for Old Men,” but Joel and Ethan Coen weren’t exactly thrilled to be part of a roundtable interview about their latest movie, “A Serious Man.”

In the 25 years since their startling film noirish debut with “Blood Simple” in 1984, they may have gotten a little more serious, but not much — especially on a late Sunday morning when the Coens, who seem tired, submitted to questions from journalists about their 14th movie, which just premiered at the Toronto International Film Festival.

The dark comedy revolves around one Larry Gopnik (Michael Stuhlbarg), a nebbishy professor in Minnesota, circa 1967, whose life is starting to fall apart. His wife, Judith (Sari Lennick), wants to leave him; his bid for tenure is being endangered by poison pen letters, and he’s being driven crazy by his family, including his eccentric brother, Arthur (Richard Kind), who has nowhere to live and is sleeping on his couch, and his argumentative kids, Danny (Aaron Wolff) and Sarah (Jessica McManus). Undeserving of his bad luck, the Job-like Larry searches for answers by seeking advice from three respected rabbis, who are not exactly, this being a Coen brothers film, founts of Talmudic wisdom.

Though the film’s press kit only cagily locates the movie in an unidentified Midwestern city, the St. Cloud calendar and other clues place “A Serious Man” firmly in Minnesota, the Coens’ birthplace. This is Coen country around the time Joel would have been the same age as Danny, who, as the film begins, is nervously preparing for his bar mitzvah. So how much of the movie is autobiographical? Not much, Joel insisted: 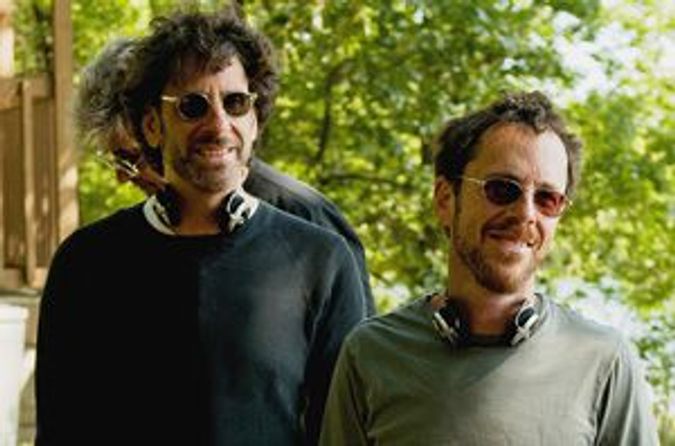 So Bright They Wear Shades: Joel and Ethan Coen directing a semiautobiographical film about their childhood era and location.

“It’s semiautobiographical, I guess, you could say, in the sense that the context for the story is that it takes place in a community very much like the one we grew up in… and also there are a couple of very superficial similarities to our family, but actually, really, the only one is that the father is an academic and our father was a university professor, but beyond that, he wasn’t really anything like the character in the movie and the story… didn’t have anything to do with anything that happened in our family.”

“A Serious Man,” though, is clearly the brothers’ most Jewish film so far. Judaism has been something that only occasionally pops up in their oeuvre — and then, usually not in a flattering light. The Hollywood Jewish caricatures in “Barton Fink” and the whining, cringing Jew played by John Turturro in “Miller’s Crossing” are the Coen brothers’ norm in such matters. “A Serious Man,” however, dials down the Jewish self-loathing. Or, rather, even though the rabbis are portrayed as fools, the filmmakers’ contempt for their characters (one of their frequent failings as filmmakers) doesn’t relate to those characters being specifically Jewish. They even open their film with a shtetl fable, told in Yiddish, no less.

The point of the fable is deliberately obscure, but to the Coens, the snowy plains of the Pale are a direct link to the prairie Jewish community at the center of “A Serious Man.” Ethan noted that the film depicts “the whole incongruity of Jews in the Midwest… a subculture, and a feeling, that is different from Jewish communities in New York or Los Angeles. Joel said: “What seems incongruous to us about it is the nature of the landscape, with Jews on it; it’s funny. The whole shtetl thing, maybe this is part of why we put the little beginning story in there, to kind of frame it. The whole shtetl thing, you go, right, Jews in a shtetl, and then you look at the prairie, in Minnesota, and… we kind of think, with some perspective, having moved out, what were we doing there? It just seems odd.”

The brothers were asked if those feelings of being like strangers in a strange land affected how they approach their storytelling. That, Joel said, is “an interesting but very difficult question to answer. I guess everything having to do with your background has some influence on how you tell stories, but it’s hard to parse, I think, how growing up in a… Jewish community in Minnesota really affected it. There were other things which were probably much more culturally influential on us than that in particular, things like television, pop culture that other kids are exposed to at the time, if you want to sort of look at things that were probably most… formative, but I really don’t know.”

The Coens, while pointing out that they believe “A Serious Man” has commercial appeal beyond Jewish audiences, admit to having wondered how their community would react. “We were probably curious about whether there would be hostility [toward it], but Jews who’ve seen it, religious Jews who’ve seen it so far, have been surprisingly open to it,” Ethan said. “A lot of Jews see things through the prism. Is this good for the Jews? I must say we haven’t encountered any negative pushback [to the film]. In fact, it has been just the opposite, which is very gratifying because, obviously, the sprit in which it was made was as an affectionate representation of something we were very familiar with. We’ll see, because it hasn’t really been out there.” And though Larry fears his redneck neighbor in the movie, the Coens insist they never personally experienced antisemitism growing up in Minnesota. Ethan said, including himself in the answer to whether this character truly related to the Coens’: “I assume all Jews are fascinated by antisemitism. I don’t know why.”

Considering how culturally specific “A Serious Man” is in its Jewish and Minnesotan milieus, was it harder to create than their other movies, which, with the exception of “Fargo,” don’t relate to their lives or origins at all? “Maybe even a little easier,” Joel said, “because we sort of had so much personal knowledge of the details, we were familiar with it, we wanted to put in, it might have been the opposite.”

“A Serious Man” is emphatically not a primer for the Coens’ adaptation of “The Yiddish Policemen’s Union,” Michael Chabon’s alternate history story of a Jewish state in Alaska. No, Joel said, “we actually had written this and finished the script and actually had a deal to make it before we were even offered ‘The Yiddish Policemen’s Union.’” He doesn’t yet know if that film actually will be in Yiddish, as some have suggested it should be, to be faithful to its source material, or even whether it will end up being a Coen brothers directed film. “We’re writing the script. We always approach these things incrementally when we’re given things to adapt,” he said. “We write the scripts, and then sometimes we do the movies and sometimes we don’t. We’ll see; it’s a complicated process.”

Watch the trailer of ‘A Serious Man’

Shlomo Schwartzberg is a Toronto-based film critic, educator and programmer.