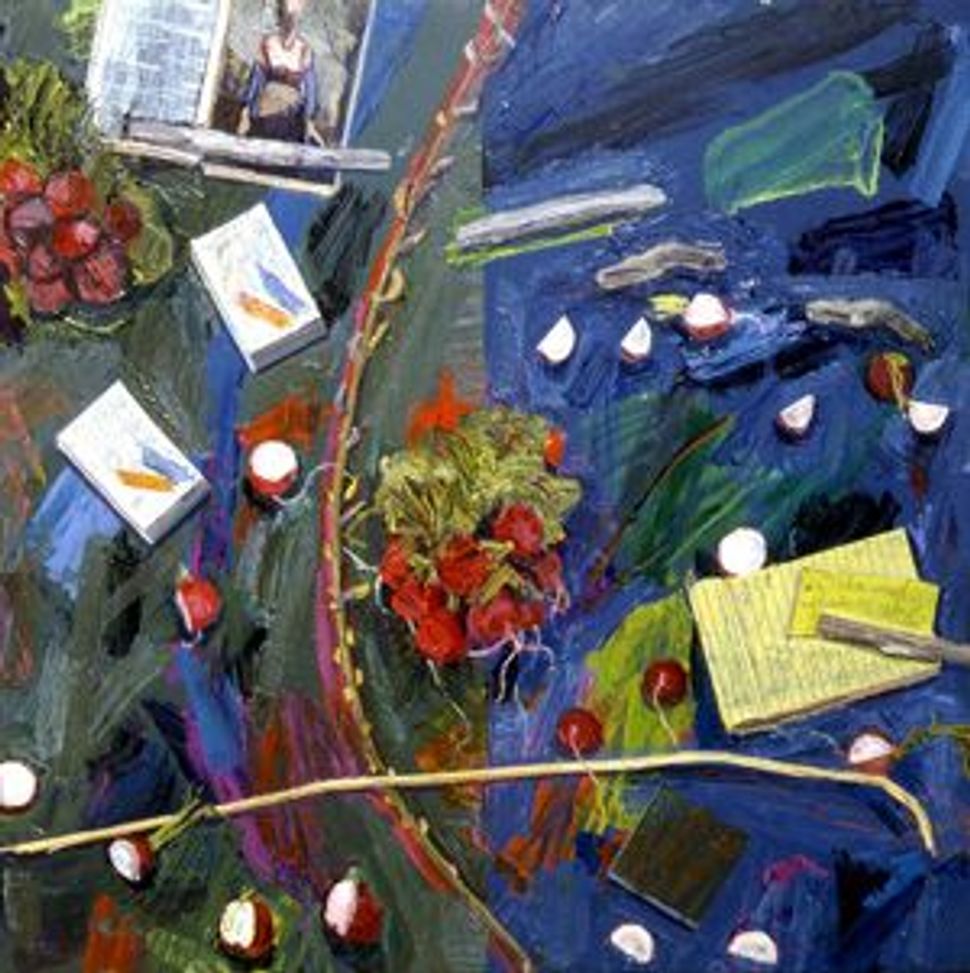 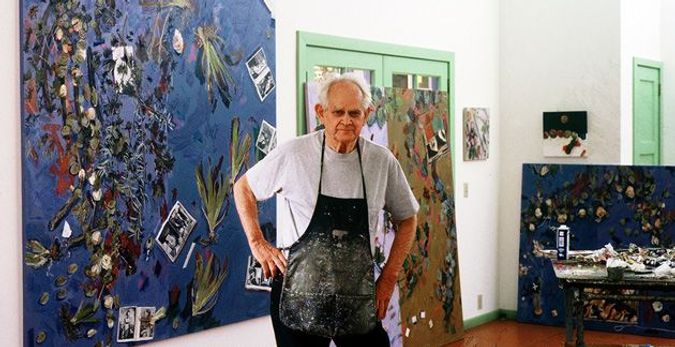 In the Studio: Manny Farber retired early from film criticism to dedicate himself to these paintings. Image by PATRICIA PATTERSON / COURTESY OF QUINT CONTEMPORARY ART

A longtime secret treasure of American film criticism, Manny Farber is finally in the limelight, a year after his death of bone cancer at age 91. Farber is being honored with the publication of “Farber On Film: The Complete Film Writings of Manny Farber,” an 824-page tome from the Library of America, collecting many long-overlooked reviews originally written for The Nation, The New Leader, Artforum and others. One previous such collection, “Negative Space: Manny Farber On The Movies” (Da Capo Press, 1998) is only 424 pages long, but unlike most movie critics, Farber’s writings benefit from being read in bulk. September’s Telluride Film Festival included a panel discussion, “The Celebration of Manny Farber,” as well as special screenings of the critic’s favorite films.

Also a talented painter, Manny (Emanuel) Farber was born in the copper smelting town of Douglas, Ariz., the youngest of three sons in a family of shopkeepers, originally from Vilnius, Lithuania. A high-spirited family of cultural strivers, the Farbers were constant presences at the town’s silent movie palace, applauding films starring Douglas Fairbanks and Lon Chaney, or cheering outdoor spectacles as the 1928 Bunion Derby, a much-touted cross-country footrace that started on the West Coast. As a youngster, Farber watched his two fiercely cerebral elder brothers grow up to be distinguished psychiatrists. One, Leslie H. Farber, also became a noted author. As if in reaction, Farber opted for arts and crafts, embracing painting earlier in life; he later elected to study carpentry, considering this field more independent than accepting government subsidies as an artist from the Works Progress Administration, as did so many of his contemporaries. Farber’s sensibilities as a painter and carpenter, the latter a trade which he practiced for many years, were essential parts of his journalism, which he began writing earnestly in the early 40s after he followed his brother Leslie to New York.

There he struck up friendships with an ardent group of near-contemporary writers and critics, including Isaac Rosenfeld, Saul Bellow, David T. Bazelon, and Robert Warshow. Finding that film criticism was a steadier gig than art reviewing, Farber immediately began judging new films in terms of their usefulness to him as visual inspiration. His reviews truculently cast aside whatever he did not find personally pertinent, with the impatience of a craftsman pushing away an unwanted hammer or screwdriver.

This often brusque, no-nonsense approach could result in conclusions that most movie goers did not share, such as when Farber claimed, in a 1951 review of the hit “A Streetcar Named Desire” that Marlon Brando gave a “lush physicality and a show-off’s flamboyance to the character of Stanley [that] makes him seem like a muscular version of a petulant, crazily egotistical homosexual.” Or the Oscar-winning performance given by Audrey Hepburn in “Roman Holiday” (1953), who was nonetheless slated by Farber as a “rather cold and facile actress who turns on charm with a kind of trade-marked affectation.” Films widely seen today as classics that Farber disliked at the time include John Ford’s “My Darling Clementine,” Billy Wilder’s “Some Like It Hot,” Joseph Mankiewicz’s “All About Eve,” François Truffaut’s “400 Blows,” and Akira Kurosawa’s “Rashomon.” Farber explained in an interview in Negative Space that to merely evaluate a film is “practically worthless for a critic. The last thing I want to know is whether you like it or not…Criticism has nothing to do with hierarchies.” 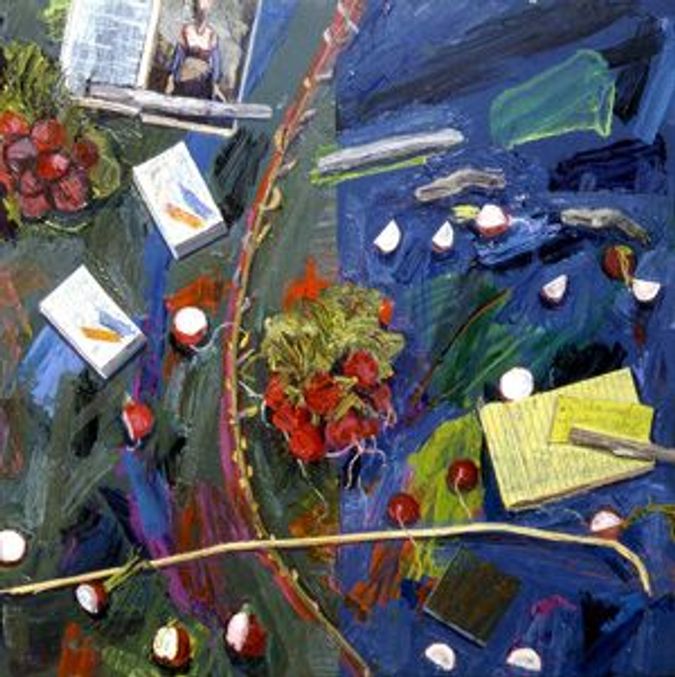 Instead, what enlivens Farber’s writing on film is the seizing upon details, such as when he notes about a 1944 film, “Purple Heart:” “It is a minor point — but worth bringing up after so many repetitions in war movies … some Jews do not come from New York, nor need they always be of the half comic, half wise-guy street-car conductor-type; while we’re on it, why can’t the Jew for once be the villain, or the pilot and leader of the airplane crew.” Allergic to stereotypes, Farber states, as part of his review of the Gershwin biopic “Rhapsody in Blue” (1945): “Robert Alda, who plays the Gershwin role, is much less virile, eloquent, and Jewish than Gershwin …The Jewishness of the Gershwins is made vaguely evident by fearfully playing an occasional Jewish melody in the background and by using for comedy purposes a limited number of Jewish attitudes, some of which are pretty funny.”

Farber was readily amused by Jewish humor. In a 1966 essay he notes that the film “Casablanca” (another much-beloved hit about which he had decidedly mixed feelings) “shifts into high gear as soon as Bogart’s glum face hits the surrealistic Yiddish energy of Leonid Kinskey,” referring to a Russian-born character actor who was a staple of films of the 1930s and 1940s. Yet Farber drew the line with the comedian Jerry Lewis, described in 1951 as a “type I hoped to have left behind when I short-sheeted my last cot at Camp Kennekreplach.” Farber’s extreme loathing made for some of his most vivid writing, decrying Lewis’s “sub-adolescent, masochistic mugging. Lewis has parlayed his apish physiognomy, rickety body, frenzied lack of coordination, paralyzing brashness, and limitless capacity for self-degradation into a gold mine for himself…”

While detesting something can make for an entertaining review, Farber’s most illuminating essays are about those directors he truly admired, many of them from America’s so-called “B-film” genre who won respect, if at all, from Europe. Of these, Farber writes with perhaps the most affection about the tough-guy director Samuel Fuller born in Worcester, Mass., the son of Benjamin Rabinovitch, a Jewish immigrant from Russia, and Rebecca Baum, a Polish-Jewish emigrée. “Fuller,” states Farber in a 1969 appreciation, creates films marked by “lyricism, real iconoclasm, and a comic lack of self-consciousness.” Farber also relished the unpretentious films of Don Siegel, typically finding moments of art where artiness was completely absent. Farber asked in an essay, also from 1969: “What is a Don Siegel movie? Mainly it’s a raunchy, dirty-minded film with a definite feeling of middle-aged, middle-class sordidness.” Yet Farber also responded to higher-flown films, when they focused on the kind of obsessive detail he so treasured, as in the film “Jeanne Dielman, 23 Quai du Commerce, 1080 Bruxelles” (1975) by the Belgian director Chantal Akerman. Akerman, whose Polish-Jewish grandparents were murdered in Auschwitz, was one of the last film subjects about which Farber wrote before his premature retirement from criticism in 1976. By then, Farber wanted to focus full-time on his painting, which after periods of abstraction nestled into a long series of representational still-life paintings that capture some of childhood’s wonderment.

The very last text in “Farber on Film” is from 2004, paying homage to his friend and longtime colleague at the University of California, San Diego, Jean-Pierre Gorin. Born into a French-Jewish family in Paris, Gorin moved to America where he created nonfiction films such as “Routine Pleasures” (1986), based on Farber’s work and their mutual friendship, (although Farber himself never appears in the film) with a strong undercurrent of child-like wonderment. In Farber’s paintings, and buried deep behind his often excoriating critical prose on film, reflections of childhood bliss are an essential element of his artistic identity.