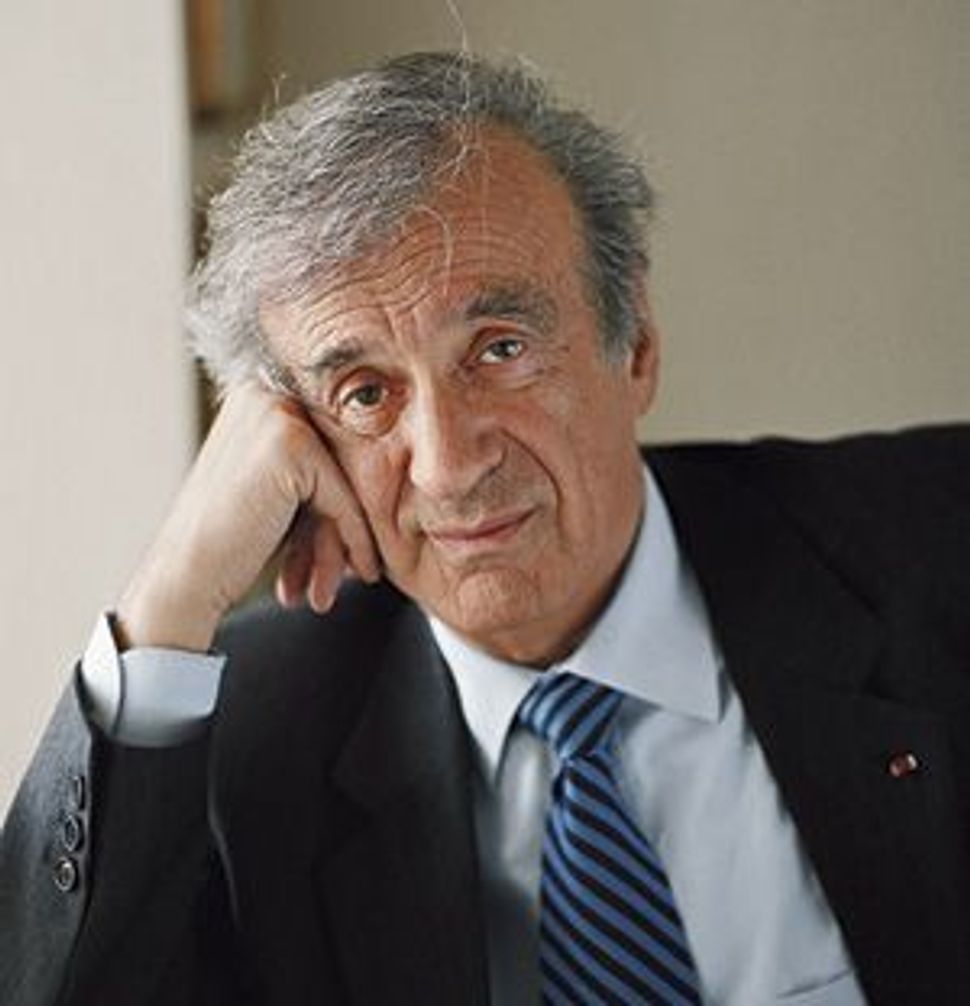 Glum: Despite the wine, no magic in Wiesel on Rashi. Image by GETTY IMAGES

‘Why Rashi and why me,” asks Elie Wiesel, in the preface to “Rashi,” a slim biography that is the latest offering in the Jewish Encounters series by NextBooks. 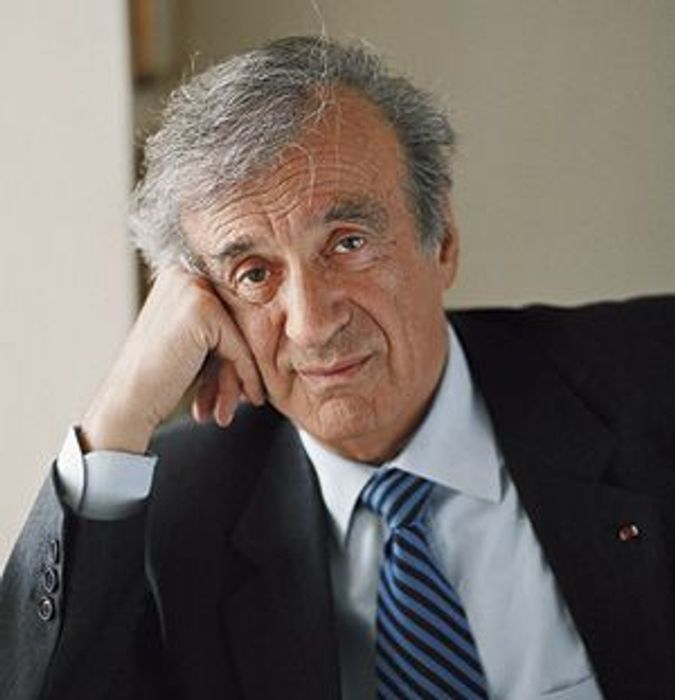 Glum: Despite the wine, no magic in Wiesel on Rashi. Image by GETTY IMAGES

Rashi is commonly thought to be an acronym for Rabbi Solomon Ben Issac, whose comprehensive commentaries on the Bible and the Talmud have been hailed for centuries as works of genius (particularly the latter). But Wiesel, an Auschwitz survivor, author and Nobel Peace Prize winner does not give a satisfactory answer to his probing question.

No, Wiesel didn’t write about Rashi, says the author in the preface of the book, because he is a descendant of 15th-century scholars believed to be related to Rashi (this must be an East European obsession, because my Polish-born grandmother made the same claim). Rather, he agreed to Schocken Books and NextBook’s project editor Jonathan Rosen’s invitation to write about Rashi because the great Ashkenazi medieval scholar was his first friend. “I loved him … I feel the need to tell [Rashi] everything I owe to him … It is the Jewish child in me who thanks him.” *Oy.

Perhaps Rosen was thinking, “Well, Wiesel, was a khsidishe yeshive-bokher in Sighet, Hungary, and had his faith sorely tested in Auschwitz. Let’s see what he does with Rashi.” The result is a book that is hard to classify. The mini-biography (just under 100 pages) is not a serious history of Rashi nor is it a philosophical work. Instead, it falls into the category of inspirational literature plus some light history. The problem is that the reader starts out with the expectation that Wiesel, a famous death camp inmate who powerfully and memorably described his experiences in the memoir, “Night,” might have had something original, perhaps ironic, perhaps insightful, to say about Rashi, or the importance of studying Rashi’s writings in the 21st century. He doesn’t.

The book follows Wiesel’s meandering, sometimes, narcissistic ruminations on Rashi and his world. Why write this? Is Wiesel becoming an Orthodox rabbi? Wiesel admits he’s getting sentimental, perhaps reconnecting with the lost world of his heder-filled childhood? Maybe it’s a paper tomb for his Orthodox parents? Maybe he identifies with Rashi, who managed to create a library of writings amid a life marred by hardship and bloodshed? Or maybe Wiesel was just following series guidelines.

Wiesel weaves in some general history about Rashi — he was 55 years old at the time of the first Crusade — and of the Jewish medieval world, its scholars and communities. He notes that a blood libel in Troyes in 1288 (Rashi died in 1105) led to the execution of 13 Jews. He examines Rashi’s professed dislike of Christianity, as well as explains some of Rashi’s more famous commentaries. Wiesel writes that Rashi believed Rome (i.e. the Church) was descended from the biblical Esau, and that the Christians saw the Jews’ “tragic destiny” as proof that the latter were no longer God’s chosen people. He adds that Hebrew University Jewish historian Professor Avraham Grossman, a Rashi biographer, notes that the medieval commentator bore animosity toward Christianity because of “horrendous persecutions, which Christendom inflicted on the Jews.” In that way the book is a kind of useful introduction to Rashi.

Other information is passed onto the reader. For example, Wiesel notes that Rashi’s phrase- by-phrase explication of the Oral Law has been included in every printing of the Talmud since the 15th century. Rashi, we learn, also answered individual questions that were posed to him. A woman asks if she may fast on the day after the Fast of Esther, namely on Purim, because she may be required by an unnamed countess to follow her on horseback on the Fast day itself. (Rashi says no.) Wiesel also hints at contemporary troubles: He recalls that in an era when Christians and Muslims were warring over Palestine, Rashi said: “One day the nations of the world will tell the Jews, this land is ours; you stole it from us. And we will reply: the land belongs to God; He alone has the right to say who will live there. And he gave this land to us.” Wiesel also lists a gory litany of Crusader violence and antisemitism, which ravaged medieval Jewry and of which Rashi surely knew, though the sage was personally never known to be a victim of Christian wrath.

Wiesel’s Rashi book, then, is a kind of grab bag of information gleaned from other scholars who did research on Rashi. While he names the work of Grossman, he ignores (unless I missed it and there is no index), Leopold Zunz, the German-Jewish scholar who wrote an extensive biography of Rashi in 1823.

NextBook blurbs use words such as “magical” to describe this book, but the spells it tries to cast feel contrived. Wiesel strains to get started. He checks into a hotel in Troyes, in Champagne near Rashi’s birthplace. Champagne is famously known for its sparkling white wines and Wiesel wanders around hoping for sparkle to arrive. He uses his “imagination” to conjure up Rashi’s Shabbat dinners with his three daughters. He imagines the scholar, Dumbledore-like, “bent over his worktable, consulting books and ancient documents.”

Writing in 1905 on the 800th anniversary of his death, Maurice Liber wrote that Rashi might not have been the most brilliant or original thinker in Jewish history, but that he was a rich personality, especially representative of the period in which he lived. (Liber is mentioned in Wiesel’s bibliography.) Grossman writes that Rashi, contrary to a commonly held belief, was faithful to the text and, cared deeply about truth and accuracy and was an important personality. He was, writes Grossman, particularly concerned about protecting the sanctity of marriage and the rights of Jewish women. However, quoting Grossman, Wiesel says Rashi’s “singular greatness” was opening “the doors and windows” of his school to all traditions. But these words of praise might sound more convincing coming from a scholar of Rashi than from Wiesel.

One thing I do share with Wiesel: Ever since yeshiva days, when I struggled to decipher his strange cursive script, I wondered at the enormity of Rashi’s work, in a challenging time no less. I still don’t know how he did it. Wiesel doesn’t provide the answer but, even if he cannot shed much light on Rashi, he does convey a renewed sense of amazement at his accomplishments.

Netty C. Gross is a freelance writer who lives in Jerusalem.