Neither Rain, Nor Sleet, Nor Dark of Night 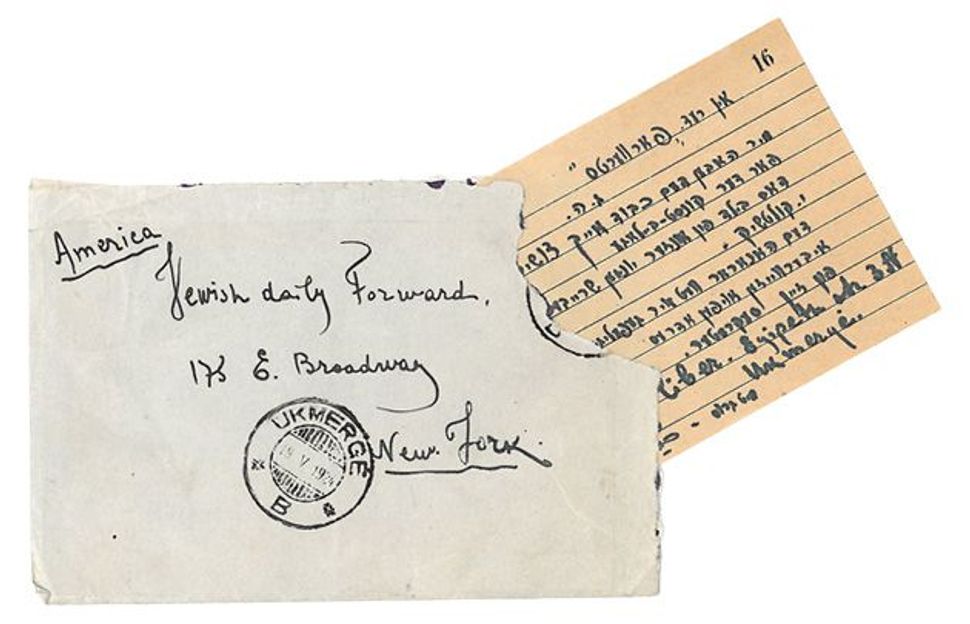 Letter from Lithuania: The U.S. Postal Service helped connect Yiddish writers in the Old World and New. This letter, asking for payment, was sent from Ukmerge in 1924. Image by FORWARD ASSOCIATION

Citizens of America take note: one of the central institutions of modern American life — the post office — is on the verge of disappearing. Like the nickelodeon, it may soon be consigned to the dustbin of history. I don’t mean to be an alarmist but my mailbox of late has been crammed with so many announcements about a reduction in services, a change in the hours of operation or, worse still, the closing of a local branch, that it’s hard not to notice that something’s afoot.

I, for one, would mourn the passing of the post office. It’s not that I collect stamps or, for that matter, enjoy the enforced collegiality of waiting on line for an eternity to transact the most routine of exchanges. And while I do look forward at day’s close to peering inside my mailbox to see what lies inside (bills and catalogs, usually), that tiny frisson of excitement can be continuously experienced 24 hours of every day through the good graces of email. No, it’s not the routine functions of the post office whose passing I’ll rue. What saddens me about the imminent passing of the post office has little to do with its day-to-day dimensions and everything to do with its relationship to history.

Put simply and unequivocally, the mail has had a major hand in shaping the modern experience, bringing people together and forging a tangible sense of community, often at great cost. It has also been indispensable to the study of history. How diminished we all would be without the fabled bintel brief, the exchange of advice letters found in the pages of the Forward, or the carefully saved correspondence between family still in the Old World and those who picked up stakes and moved to the New. How culturally impoverished we would be without the extensive exchange between the members of the far-flung Mordecai family whose epistolary musings revealed the detailed inner workings of American Jewish life in the 19th century. Spanning both time and geography, the Mordecai family correspondence constitutes one of the greatest extant sources we have about what it meant to be Jewish in the United States prior to the great wave of Eastern European immigration.

And what of love letters, carefully bound together by a string or a ribbon? Can we possibly imagine a world where the intimate patter of billets doux has been supplanted by the digital coldness of email? In the absence of the mail and the post office that made it possible, the voices of the past would be quieter, possibly even silent, while historians would be severely hampered in their efforts to recover the texture, sensibility and language of previous generations.

Even more to the point, perhaps, the mail had a great deal to do with transforming America into a modern nation. It may surprise one to learn that one of the fiercest and most hotly contested political battles of the early republic fastened on the issue of whether or not to deliver the mail and keep the post office open on a Sunday. Pitting so-called “Sabbatarians” against those who styled themselves “Anti-Sabbatarians,” this issue was described by Lyman Beecher, one of the most influential evangelical preachers in early 19th century America, as “perhaps the most important that ever was, or ever will be, submitted for national consideration.”

From where Beecher and his fellow Sabbatarians sat, delivering the mail on the “Lord’s Day” was a decided blow to the avowedly Christian character of 19th century America, as well as a clear violation of the Fourth Commandment. Infringing on the “laws of God,” mail delivery that day was likely to provoke “divine displeasure.” But then, Sabbatarians did not just have theology on their minds. Equally displeasing to them was the prospect of an increasingly intrusive federal government, whose mandate to keep the post office open interfered with the traditional rhythms of daily life in Christian America. Determined to keep God closer and the government at arm’s length, Sabbatarians launched a grass roots campaign of unprecedented proportions. They made use of the post to flood Congress with angry petitions, even threatening to create a brand-new political party: the “Christian Party.”

The Anti-Sabbatarians, in turn, gave as good as they got, generating a series of strongly argued rebuttals rooted in notions of the common good rather than in Christian theology. For one thing, not to deliver the mail on a Sunday, they charged, was a slap in the face to the nation’s spirit of innovation and improvisation or what they colorfully called its “go-ahead-ativeness.” Limiting mail delivery to just six days a week would severely impede the nation’s economic development, especially when it came to being notified about the arrival of new goods.

What’s more, the non-delivery of mail on Sunday smacked of religious prejudice. After all, not every American kept the Sabbath on that day. The Jews did not, the Anti-Sabbatarians were quick to point out, nor did the Disciples of Christ. And since “the Jews in this country are as free as Christians and entitled to the same protection,” a decision not to deliver mail on a Sunday was tantamount to discrimination. From the perspective of the Anti-Sabbatarians, at stake was nothing less than the separation of church and state.

Amid heated, often ugly debate, the Anti-Sabbatarians eventually carried the day until the advent of the transcontinental railroads and the debut of the telegraph in the 1840s provided speedier alternatives to daily mail delivery. But it wasn’t until 1912, when a coalition of ministers and postal workers reluctant to come to work on Sunday convinced Congress that six days of mail was more than enough, that Sunday mail delivery ultimately came to its inglorious end.

The post office, when looked at in historical terms, turns out to be not just an artifact of modernity but also one of its engines. Controversy over its scope and function prompted the nation to look inward, to examine — and render explicit — its assumptions about the relationship between religion and the body politic. In the wake of that controversy, the separation of church and state emerged with renewed focus and sharper clarity as one of this country’s abiding principles. For that, and so much else besides, we ought to be eternally grateful to the United States Postal Services.

Neither Rain, Nor Sleet, Nor Dark of Night