In the Image of God 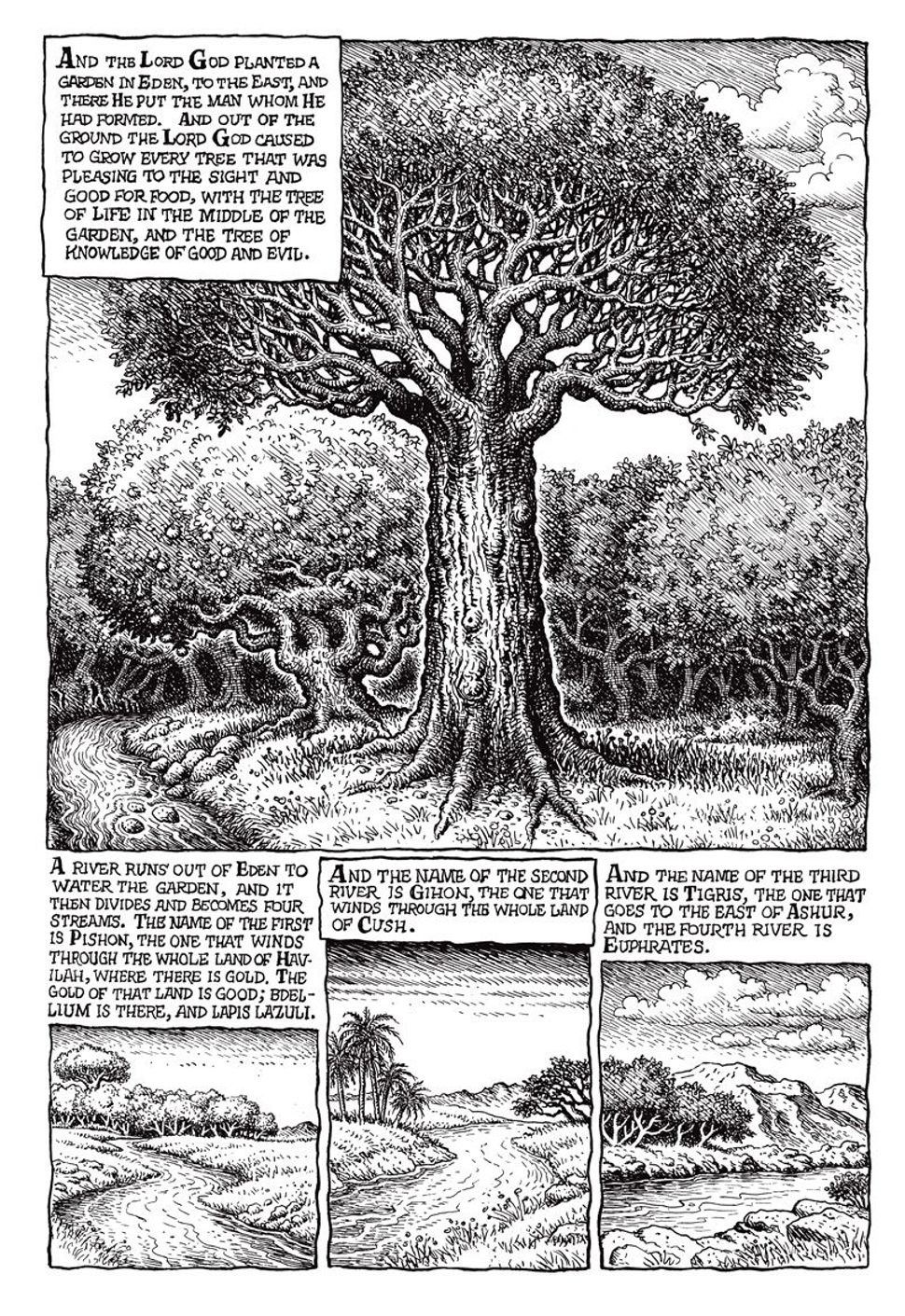 To say this book is a remarkable volume or even a landmark volume in comic art is somewhat of an understatement. It doesn’t hurt that excerpts of the book appeared during the summer in the New Yorker and that the Hammer Museum in Los Angeles is opening an exhibit of the original drawings from which the book’s contents were adapted. “The Book of Genesis,” Robert Crumb’s version, nevertheless stands on its own as one of this century’s most ambitious artistic adaptations of the West’s oldest continuously told story.

No comic artist has been more influential than Crumb. In terms of sales, his work is dwarfed by the superheroes and, in comic art prestige. Art Spiegelman, and a short list of others including Alison Bechdel and Marjane Sartrapi may have displaced Crumb. But Crumb’s influence abides and endures in his occasional LP/CD covers, in his volumes of collected work (16 volumes so far and counting), his artistic prizes and a generation of artists who have incorporated his particular view of humanity.

Surprisingly, his best work in 20 years has actually been in the genre of adaptation, specifically an adaptation of Franz Kafka, dating to the mid 1990s. On that highly curious point, any consideration of this “Genesis,” as a highly personal comic art, properly begins. Notoriously, Crumb is a gentile who fled from his deeply dysfunctional Delaware family to the Cleveland neighborhood of Harvey Pekar and the arms of the first of two Jewish wives. “Crumb,” the 1994 film documentary, was in many ways about emotional pain (including a brother doomed to suicide) and his craving for a certain kind of woman, who, although possibly any female with a bemuscled backside, was in fact most likely to be Jewish. She, reality and image, was his consolation. The strips that he drew of Jewish-American life, nevertheless, reworked stereotypes, some funny (he visits Florida with his second wife, and holds a tiny grandfather on his knee), and some, doubtless, insulting to many readers.

In the pages of “Introducing Kafka,” Crumb became his fictional protagonist with such depth of insight into the logic of the doomed writer, as well as of Kafka’s famed works, that many readers were simply astonished, this reviewer among them. Kafka is the exemplar par excellence of a type of ambiguous, tortured mittel European Jewish personality as it hovered between faith and uncertainty, shortly before the Holocaust. Not Spiegelman, not Ben Katchor, nor Sharon Rudahl, nor others who drew historical or quasi-historical strips about Jewish history, had taken the characterization as far as Crumb. An earlier escape from Middle American culture had propelled Crumb toward his satirical protagonist Mister Natural, a Zen-like, robed quasi-prophet of the 1970s-80s. Three decades later, Crumb’s robed prophets are far from Zen.

Crumb’s “Genesis” is then perfectly serious and the author wants us to know it. As he says on the cover, “Nothing Left Out!” Every “beget” from the King James Bible can be found here, along with plenty of scenes censored from previous graphic adaptations. And more prose, in the final “Commentary” segment of the book, than non-writer Crumb may have put on the page anywhere, aside from his published letters. More striking for anyone but the seasoned Crumb fan: unlike previous Biblical comic adaptations, including some published and drawn by Jews, Crumb’s characters actually look Jewish, the women even more than the men. The contrast to the classic work, EC Comics’ “Picture Stories from the Bible” (1945) in that respect is most illuminating. But more recent works like the best-selling “Manga Bible” (2000) are not much different (nor was the “The Wolverton Bible” by one of the strangest of comic artists Basil Wolverton). Close readers will see Crumb’s wife Aline Kominsky, to whom the book is dedicated, again and again, in various guises; perhaps only Chagall drew his beloved wife so often and with such varied imagination.

Not only are the characters Jewish here, they are all ages and sizes. If, for instance, there are more drawings of Jewish elders in any single volume of comic art anywhere, I have never seen them. The women here are beautiful when young, heavily busted with large, muscular thighs. The men are strong, their beards full and noble. The deity has a really big beard and retains his notoriously bad temper, as well as his commanding presence, and absolute demand for loyalty. The animals of Genesis (in Noah’s ark and elsewhere) may be where Crumb is most similar to earlier comic art adaptations of Biblical texts, but they are drawn, like everything else, with such loving care that they are special and demand repeated viewing. 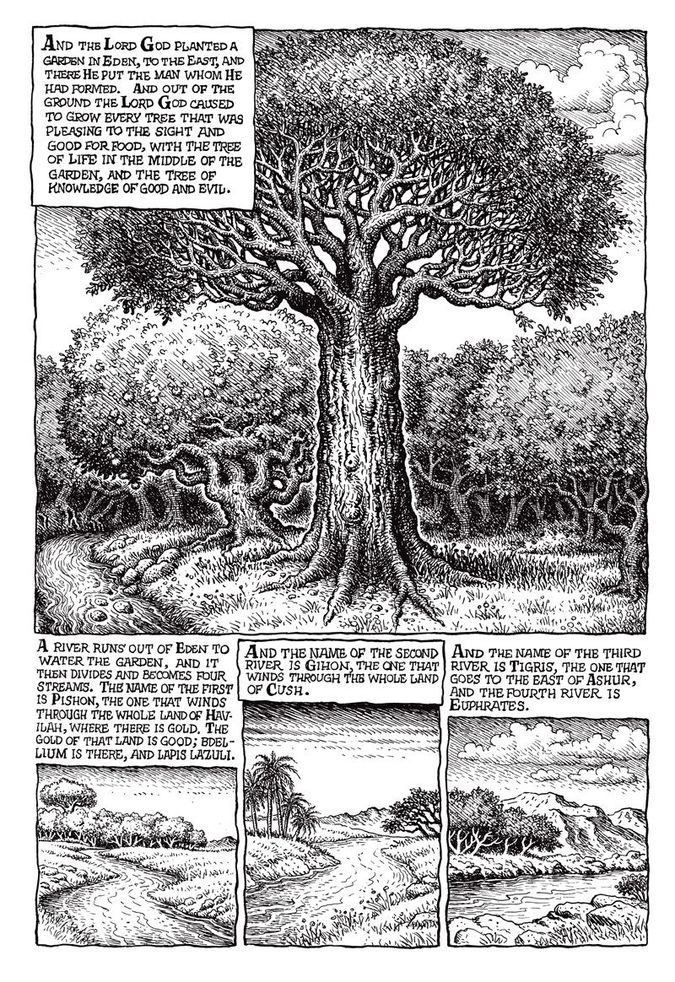 In those extensive notes at the end, Crumb comes as close as he is ever likely to revealing the sources and depth of his commitment to the text. He had been puzzling, no doubt under a wave of feminist criticism, about the gender struggle, until Torah scholar Savina Teubel’s “Sarah the Priestess” (1984) gave him new insight: a matriarchal background, female deities and actual female power, in a society turning toward patriarchy but retaining some elements of women’s prehistorical strength and centrality to the direction of early civilization. If anything is reinterpreted purposefully in “Genesis,” it is in gender, and Crumb does so not by scoring points but by rearranging the visual subtext. Gender issues also help him reframe somewhat the class dimension of tribal society, which endures not through brute force but because of the strength of its women.

The commentary on his visual choices and his broader interpretations explores and explains his few intentional deviations, not only in the name of narrative clarity but artistic intent. Mainly, his notes drive home how he struggled to interpret the text in suitable graphic form, chapter by chapter, sometimes even character by character. There is no doubting the artist’s integrity or hard work, in no small part because he redrew again and again, trying to find historically accurate clothing and scenery. The Old Testament of cinematic Charlton Heston, so to speak, became the Genesis of lived and perceived experience, socially real and super-real. Clues are provided with translations of specific Hebrew names within the visual text, essentially metaphorical in meaning. These clues may be the closest to footnotes that Crumb has ever provided.

Comics scholar Jeet Heer, has noted in “Bookforum” that Crumb’s biblical characters, with the exception of the deity, have no internal lives: only the deity has depth and personality. As with the original text, much more is implied in Crumb’s visual text than can be stated, because scenes rush by so fast and because the artist forever works out, pen or brush in hand, a unique meaning that escapes easy interpretation. Even closer to the mark, Heer argues that above all, this is a book about bodies, the natural expression of an artist whose work has, possibly more than any other master of comic art, been concerned with body structure and expression.

And offending the deity? Crumb treads with a caution all the more remarkable for an artist, who, short decades ago, allowed himself the full run of his imagination, heedless of the consequences. Crumb’s innovation might be summed up in his characterization of Joseph, brilliant in subjugating Egypt but weary of his own powers. In the final phrases of the book, the artist suggests a radical view several thousand years previous to Jewish Karl Marx. “In the very last chapter, when his obstreperous brothers fling themselves at this feet and proclaim, ‘Here we are, your slaves,’ he says to them, “I am not God, am I’ Joseph has learned a much finer humility than the fear-driven kind shown by his barbaric brothers.” So says a humble Crumb.

Paul Buhle is the author (with Denis Kitchen) of “The Art of Harvey Kurtzman: The Mad Genius of Comics” (Abrams ComicArts), an illustrated biography of Mad magazine’s founder.

In the Image of God