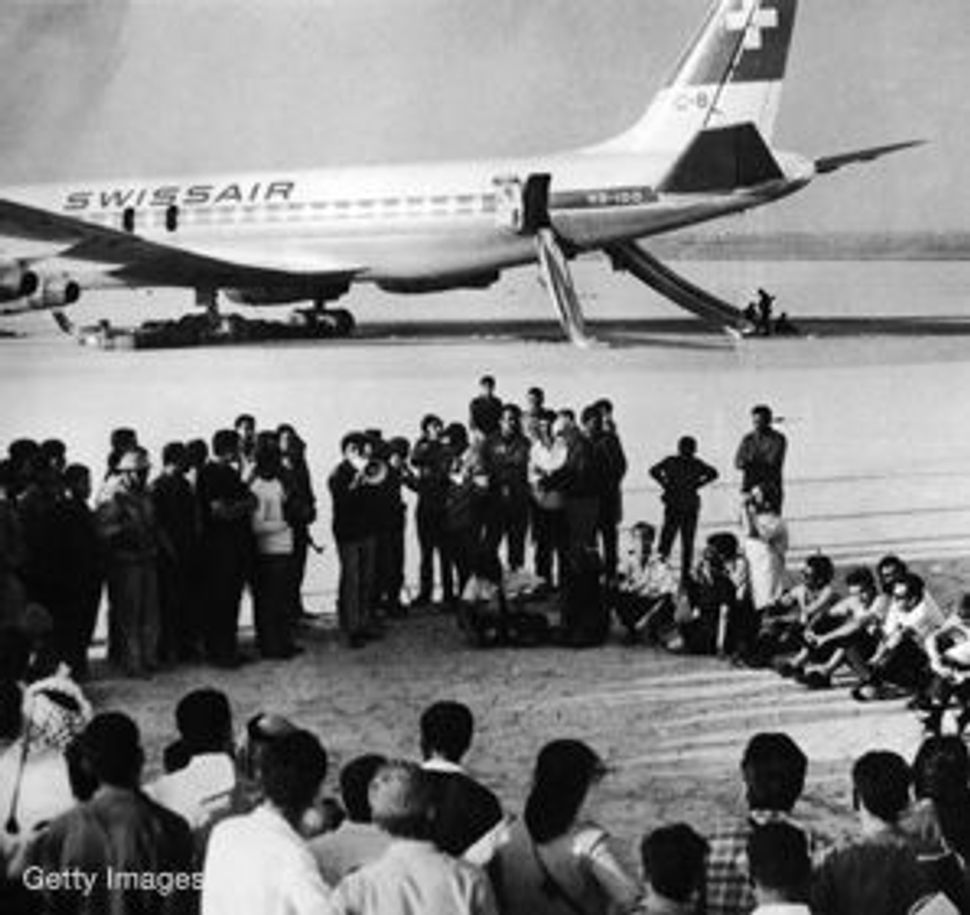 Raab was forever frustrated that no book had ever taken up the story of the 1970 hijacking so he decided to write one himself.

Terror in Black September: The First Eyewitness Account of the Infamous 1970 Hijackings 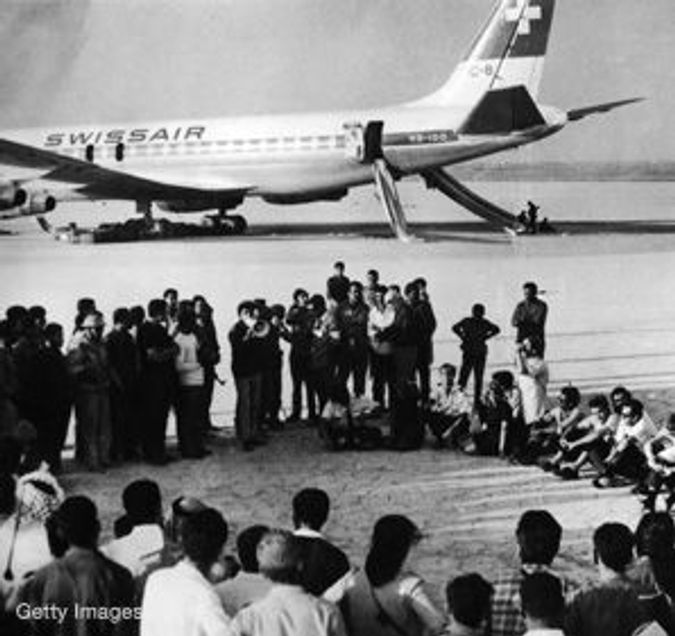 Raab was forever frustrated that no book had ever taken up the story of the 1970 hijacking so he decided to write one himself.

The Palestinian fedayeen who hijacked David Raab’s plane on September 6, 1970, surely thought they had hit the jackpot. Seventeen-year-old, baby-faced Raab was still so excited from his summer vacation in Israel that he boarded his TWA flight wearing a souvenir Israel Defense Forces uniform complete with enough general’s stars to outrank Moshe Dayan. As the group quickly found out, the boy was just a boy, and not even an Israeli — only an American teenager from the suburbs of Trenton, N.J., who wore a knitted yarmulke and would make a valiant effort, during the three weeks of his captivity, to keep kosher.

Raab was one of 310 passengers and crewmembers taken hostage and held in Jordan for the month that has become known as Black September, in which Palestinian fighters tried to overthrow the Hashemite King Hussein. It was a month in which fierce battles were waged in the north of Jordan, which at one point was even “liberated” by the militants, and in the capital, Amman. So threatened was Hussein that he famously asked for Israel’s help in pushing back the fedayeen, who had been joined by Syrian forces. In the middle of all this were the hostages, captured days before the fighting began. Held together on a dusty and brutally hot tarmac in the desert to the east of Amman, and then separately in safe houses all over the country, they became the unlikely witnesses to a moment of extreme tumult in the Middle East in which the Jordanian kingdom nearly collapsed, almost upending the entire status quo of the region just three years after the Six Day War. Raab, like all the hostages, survived the ordeal. He grew up to become a management consultant and an amateur writer of op-ed articles on Middle East politics, but he was forever frustrated that no book had ever taken up the story of what happened to him in 1970. So he wrote it himself, mixing his personal remembrances with an overly detailed, hour-by-hour retelling of the various diplomatic wranglings, battlefield events and negotiations that took place from September 6, when his plan was set off course, until the 28th of that month, when he finally arrived back in America.

By 1970, Jordan had become the home of various Palestinian organizations, regrouping from the defeat of 1967. Yasser Arafat’s Palestine Liberation Organization was the largest and most powerful faction, but the ideologically Marxist Popular Front for the Liberation of Palestine, because of its harder line or a simple lack of resources, was more inclined toward the dramatic gesture. Hijackings were its thing. And in 1970, to protest Jordan and Egypt’s willingness to engage in talks with Israel, it planned what was supposed to be a spectacular quadruple hijacking (a feat that was not outdone until 31 years later on another September day).

Two of the planes, a TWA and Swissair flight, were successfully taken over and flown to Dawson’s Field, a deserted British landing strip in the Jordanian desert. One other, a British Airways flight, was captured but then flown to the Cairo airport, evacuated and then blown up on the landing strip. A fourth attempt, by the notorious Leila Hadid (who had undergone plastic surgery so that she could pass undetected) to commandeer an El Al flight, was foiled. (In a fifth plan, another British Airways flight was hijacked by a PFLP sympathizer three days later and brought to Dawson’s Field, as well.)

The conditions for the release of the hostages were never made entirely explicit, but they involved an exchange for a few PFLP militants then being held in custody in Europe and a far greater number in Israel. What the hijackers found out as soon as they took stock of the passengers was that there were only three Israelis among them, none of whom was of military age, and so they counted any American Jews, including Raab in his IDF uniform, as dual-citizens.

What ensued was a week spent on a hot, dusty airplane, which for Raab turned quickly from an exciting adventure to an uncomfortable and scary situation. Eventually, most of the women and children were freed and the men were separated and hidden in groups all over Jordan to wait out the end of the civil war that had suddenly erupted.

It may sound insensitive, but in reading Raab’s account, “Terror in Black September,” what struck my post-9/11 eyes was how relatively well the 1970 hostages all seemed to be treated. Having become desensitized to beheadings and suicide bombings, there was almost something quaint in reading about the regular meals of pita and eggs and bananas, the showers and change of clothes. For two weeks, Raab was even able to obey the laws of kashrut. And the militants, in his telling, are not entirely unsympathetic characters; they are embattled in their struggle with the Jordanian army and generally friendly to their captives. The Red Cross, which acted as a negotiator with the PFLP, and the fickle European governments who couldn’t agree on a unified approach and were pressuring the Israelis to capitulate come off much worse.

In the closing words of Raab’s book, he reminds us that “history is written by the victors.” Inadvertently, in one clichéd phrase, he also points to his inadequacy as the narrator of this story. For one thing, neither Raab nor anybody else was really victorious in this drama. Instead, he is someone who, by blind chance, was yanked onto the stage of history for a few minutes. The denouement of the hostage crisis was due more to the disorganization of the PFLP, which never seemed to have decided beforehand on what it would do after the initial hijacking, and eventually — as the Israelis predicted all along — surrendered its hostages unconditionally.

Raab’s role as a participant also prevents him from being a particularly good storyteller. Ironically, he seems blind to the fact that the very phrase he conjures up about victors and history is meant to mock the notion of objectivity, especially when it comes to a narrative in which emotions and personal trauma fuel the writing. The most compelling parts of this book come when Raab drops all pretense of being a historian, when he simply quotes his 17-year-old self from an account penned a few weeks after he was freed. There is real drama here, of a teenager trapped in a strange predicament and trying to make sense of what is happening.

Unfortunately, these sections, set off by italics in the book, are small islands surrounded by Raab’s attempt to deliver an authoritative account — one that is at some times too detailed and at others ignorant of the most important aspects of the story. The book’s roving focus is dictated not by a historian’s need to hold a reader’s interest but rather by a grown man’s obsessive need to find out as much as possible about the most eventful month of his youth.

Still, there is enough here to make one hope that someone does eventually take up the task of providing a definitive account of these important events. And it needn’t be a victor of any kind; any relatively objective narrator will do.

Gal Beckerman, a regular contributor to the Forward, is writing a book about the Soviet Jewry movement, to be published next year by Houghton Mifflin.