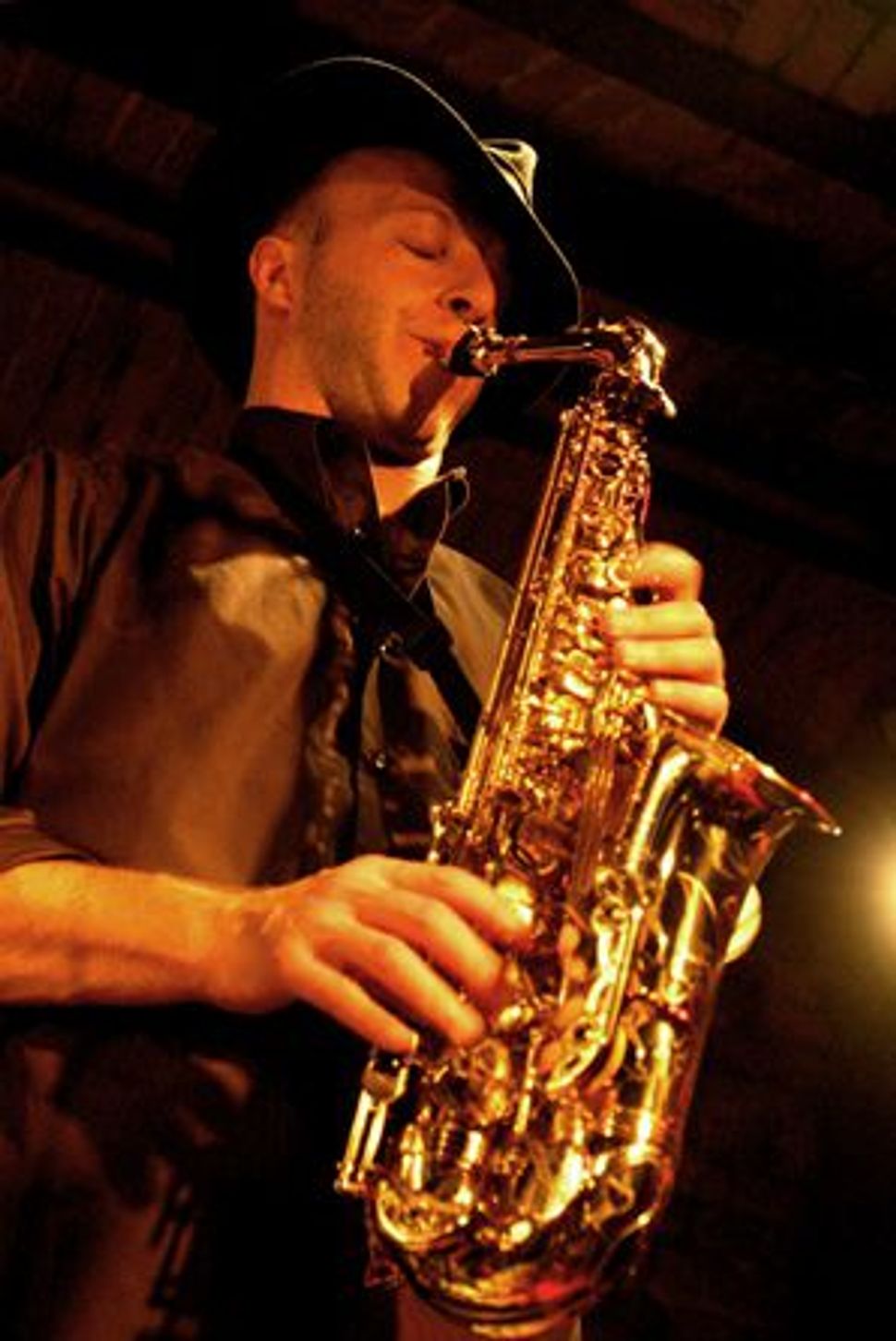 Every generation of artists faces its own peculiar set of challenges. When the first klezmer revivalists began breathing fresh life into Jewish music in the early 1970s, their task was not a simple one. They had few role models, their audience was undeveloped and many were in the position of having to learn theira instruments (cimbalom, clarinet, fiddle) on the fly. 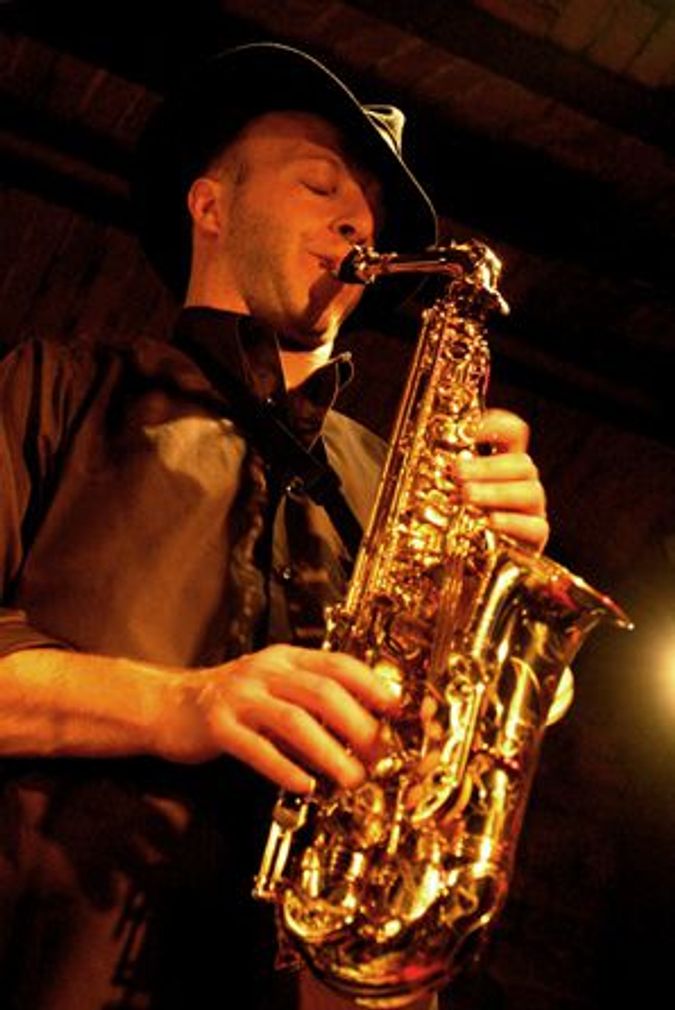 The current wave of Jewish music makers faces a very different scene. After 30 years of renewal, the contemporary klezmer community has its own band of seasoned veterans, its own festival and concert circuit, and its own cohort of virtuosos.

In other words, the revival succeeded. Now, the question facing the current crop of practitioners is no longer where to begin, but rather where to go next.

A 26-year-old saxophonist and composer, Alex Kontorovich, is attacking this problem from two directions at once. A self-confessed “jazz-head” who first encountered klezmer in college, Kontorovich is forging connections between modern jazz and Jewish music that are both subtle and deep.

Kontorovich has had plenty of practice crossing borders and ignoring boundaries. Born in the Russian town of Voronezh, he came to the United States as a child, arriving in Brooklyn and later settling in New Jersey. And he is successfully juggling parallel careers as a musician and as a mathematician: He recently earned his doctorate from Columbia University (he specializes in number theory) and began a three-year teaching appointment at Brown (this semester’s offering: multivariable calculus).

His mother, a gifted mathematician who was denied entry to graduate school under the old Soviet system of Jewish quotas, made sure that Kontorovich got math early and often. “We’d be on the way to [Six Flags] Great Adventure, and my mom would say, ‘Okay, you can go on the Scream Machine if you solve this puzzle,’” he recalled in an interview with the Forward.

Music came later, with studies in classical saxophone in middle school and then jazz in high school and college. While an undergraduate at Princeton University, Kontorovich also formed a klezmer ensemble, The Klez Dispensers, with singer Inna Barmash and trumpeter Ben Holmes. Barmash was the only one who’d had any experience with Jewish music. Not surprisingly, she was also the one who proposed forming a group.

“So Ben and I said: ‘Yeah, that’s great. What’s klezmer?’” Kontorovich recalled. “The band began before I knew what klezmer was.”

Apparently, that wasn’t much of an impediment. In 1999, Kontorovich, Holmes and Barmash all attended KlezKamp in the Catskills. “That’s what got us started studying klezmer seriously,” he said. Within a few years, Kontorovich was on KlezKamp’s faculty and on that of its northern cousin, KlezKanada. And he had begun playing with such high-profile acts as the Klezmatics and Frank London’s Klezmer Brass All-Stars.

London’s drummer, Aaron Alexander, in turn invited Kontorovich to join his Midrash Mish Mosh ensemble — an association that provided a turning point in Kontorovich’s development as a musician.

While on tour in Krakow, Poland, Kontorovich participated in a series of late-night jam sessions with Alexander, banjoist and guitarist Brandon Seabrook, and other musicians interested in fusing klezmer with contemporary improvised music. Those sessions were a revelation for Kontorovich, who had begun to feel somewhat stifled by the strictures of conventional jazz education.

“It wasn’t until those jam sessions in Krakow that I realized there’s so much more to explore in music,” he said.

Three years later, the results of that epiphany can be heard on “Deep Minor” (Chamsa), Kontorovich’s debut as a leader. The compositions, all Kontorovich originals, exploit the common modal features of jazz and Jewish music, using each system to enrich the other. The album’s very first track, “Transit Strike Blues,” inscribes the leaping intervals of modern jazz in the traditional mi sheberach mode, and lays the resulting melody atop a bed of altered blues harmonies. Its last, “Tzitzit,” is a variation on Charlie Parker’s “Chi-Chi” set in freygish mode.

Similar feats of transmogrification are scattered throughout the CD, as are long stretches of improvisation that combine Jewish and jazzish elements without any of the awkwardness that sometimes afflicts klez-jazz hybrids. Kontorovich’s solos combine jazz-oriented harmonic and timbral effects with melodic fillips straight out of the Jewish canon; Alexander and bassist Reuben Radding punctuate their loping grooves with flashes of klezmer rhythm, and Seabrook — a man who seems determined to rescue the banjo from decades of neglect in both jazz and Jewish music — adds color galore.

Mathematicians are famous for doing their best work early in life. Musicians, on the other hand, typically improve with age. It’s hard to see how Kontorovich, who already has nearly enough material for another album, could top “Deep Minor.” But it’ll be fun to see him try.