Red Emma in Black and White 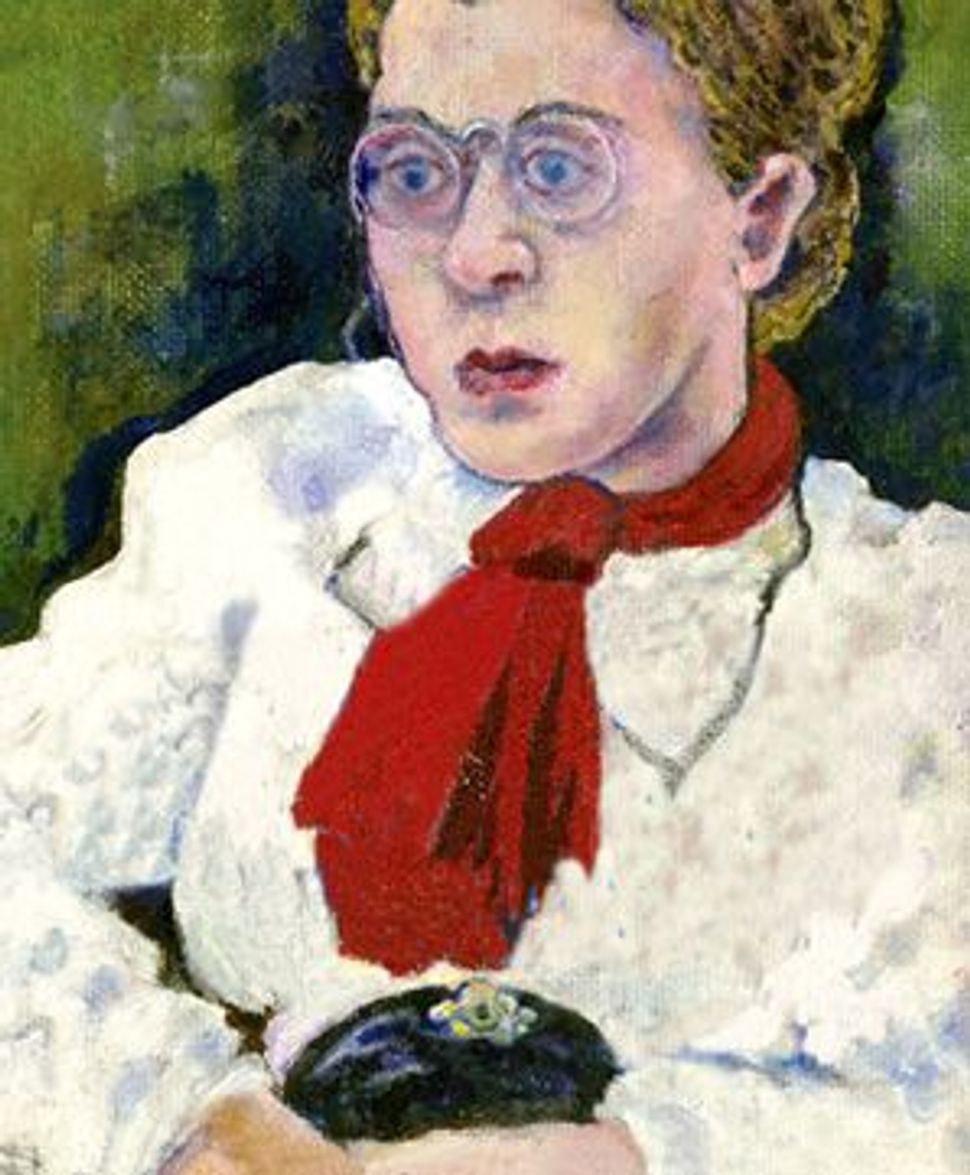 A Dangerous Woman: The Graphic Biography of Emma Goldman 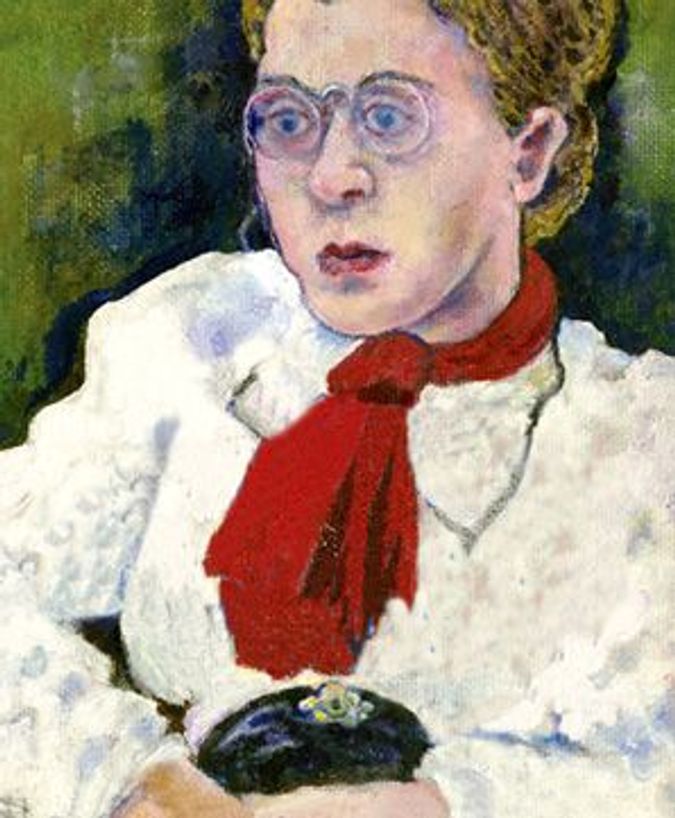 It should be of little surprise that Emma Goldman ended up a comic-book heroine.

Now dead for nearly seven decades, Red Emma — anarchist, activist, advocate of women’s rights — is still an inspiration to the young, rebellious and artistically inclined, an unlikely muse for anyone from the indie rock band Pretty Girls Make Graves to the Wachowski brothers, the filmmakers behind The Matrix series and the 2005 hit “V for Vendetta.” Comic books, then, fit quite naturally on the nexus of pop culture artifacts devoted to this long-deceased revolutionary, a testament to her central role in the American political imagination.

But comic books are a particularly hospitable form for Goldman’s legend for other, more thematic reasons. Like most comic book heroes, Goldman emerged from distressed beginnings to discover within herself an otherworldly fortitude, and like them she fought for what she believed were absolute goods while resisting what she was certain were absolute evils. She, too, had to confront the shadier vistas of her personality, balancing a desire for such virtues as freedom and justice with the often violent and unsavory means required for their attainment.

And so, one would expect a comic strip about Goldman to crackle with portentous life. Sharon Rudahl, author of “A Dangerous Woman: The Graphic Biography of Emma Goldman,” places her heroine in tsarist St. Petersburg and Revolutionary Russia, in fin-de-siecle Vienna and in the tenement towns of the Lower East Side, each a location equally as troubled and inviting as Metropolis or Gotham. She occupies these cities with a formidable cast of characters: Here, for example, is young Leon Czolgosz, the assassin of President William McKinley, and there Hippolyte Havel, stateless gypsy and mustachioed paramour. But first among this varied bunch of co-habitating conspirators is Goldman herself: Having thoroughly scanned the 993 pages of Goldman’s autobiography, Rudahl peppered her chronological narration of the revolutionary’s life with Goldman’s direct quotes in an effort to capture not only the formidable achievements of her subject’s life but also something of Goldman’s true essence and personality.

Like Goldman in her day, Rudahl, a seasoned comic artist who had gotten her start in the underground comix movement of the early 1970s, is brimming with passion and good intentions. Sadly, though, her book is overwhelmed by the constraints of the material world: For Goldman, these constraints manifested themselves in war and poverty and the evils of inequality; for Rudahl, they’re present in the medium of comics itself.

To borrow a pair of cinematic terms, graphic novels tend to reach their highest peaks either in panoramic long shots or in extreme close-ups. They are at their finest when they deliver either epic battles spanning seas and mountains or dedicate an entire panel to the hero’s straining eyes, a testament to his suffering. When it comes to the medium shot, that largely static tableau that film and TV enliven with movement and dialogue, graphic novels lie helplessly at the mercy of their text. Such submission is generally ill advised in a medium that thrives, as comic books do, on the tension between the written and the graphic, and it is particularly ill conceived when the text is driven by an encyclopedic rush to present each and every turn of Goldman’s life.

Such is Rudahl’s sensibility. Eager to live up to her book’s subtitle and deliver a bona fide biography of Goldman, she narrates and narrates, rapidly parading through Goldman’s entire life, leaving nothing out: Goldman’s childhood, her involvement with anarchism and the attempt on the life of industrialist Henry Clay Frick, her repeated stints in exile and involvement with various progressive causes are all dutifully, if briefly, reported here. Such an approach has little use for dramatic emphases, internal monologues or any other device devoted more to the exploration of depth than to breadth.

And while this is certainly a flaw, it is one underlined by the best of intentions: Rudahl’s passion for her subject is evident in every line of text or drawing. Despite the fact that Rudahl is burdened by the weight of dense chronology, her enthusiasm and dedication succeed. Such flickering, however, poorly illuminates a character such as Goldman, whose life burned bright with the flames of passion. And while Goldman’s life is certainly eventful, the biography is never more compelling than in these few moments in which her voice — defying the strictures imposed by Rudahl’s insistence to cram each and every event in her subject’s life into 115 illustrated pages — overcomes the textual din and provides a glimpse of the woman herself. Such, for example, is the case with the correspondence of Goldman and one of her lovers, Dr. Ben Reitman, a correspondence laced with a healthy dose of explicit words. Reading Goldman’s own words, exposed to her most intimate thoughts, the reader gets a far better sense of her personality, an insight that pages upon pages of exposition and chronology simply can’t relate.

Sadly, such moments are few and far between. For the most part, Goldman is presented as a sui generis revolutionary, wholly as one with her ideology and unencumbered by any trace of humanity. Even as a child, Rudahl would have us believe, Red Emma was not so much a little girl as a single-minded champion of justice and equality, a condition that seemed to worsen as she moved on in years. And while Rudahl does make an effort to bring Goldman’s personal life to light — more than one panel features a naked Emma in the arms of this lover or that — her personality remains almost entirely unilluminated. With comics being, as they are, a wedding of word and image, some enchanting artwork could have alleviated the text’s plight. But here, too, there is little spark: Rudahl’s drawing style is straightforward and sparse, with little if any attention paid to background or detail. Too often in the work, she employs gauche visual metaphors — the panel signifying Goldman’s first acquaintance with Marxism, for example, features three of the Marx Brothers quoting from “The Communist Manifesto” — and applies overgeneralized symbolism to avoid evocative and nuanced explorations. When Goldman arrives in late 19th-century Vienna, to give yet another example, Rudahl makes no effort to capture the vivid and rarified intellectual energy that won the city its fame; instead, in a panel resembling a Toulouse-Lautrec poster, she simply prints different names — Nietzsche, Mahler, Klimt — as if the names themselves are sufficient to conjure empathy, awe or understanding. They aren’t, of course, and Rudahl’s aesthetic, like her text, suffers as a result.

And yet, despite the book’s lack of emotional depth, beauty or insight, Rudahl’s task is not a complete failure. Her work might not succeed, as she states in her author’s note, “to encourage you to see more clearly and act more bravely,” but by mining Goldman’s autobiography for choice quotes, and by replanting Goldman’s words in an art form that’s highly popular and accessible, Rudahl does succeed in making both the course of Goldman’s life and the arc of her thoughts accessible and clear.

Red Emma herself, one suspects, would have at least approved of that.

Liel Leibovitz used to be both a communist and a comic-book enthusiast. He is now neither.

Red Emma in Black and White