The Holocaust Novel From Israel That America Can’t Handle 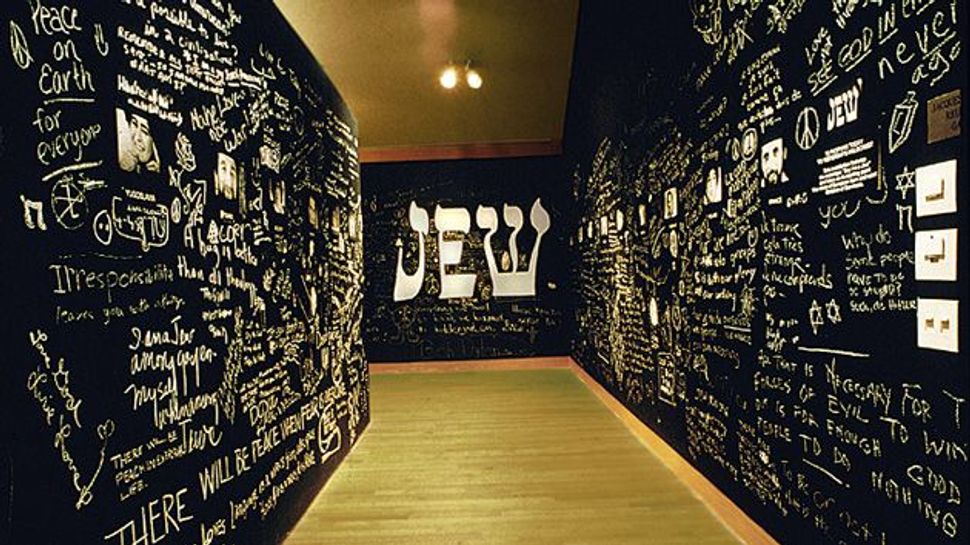 Translation Is Vital: Here the Nazi ?Jude? is translated to ?Jew? and visitors are able to comment. Image by PIER MARTON, ?JEW? 1985 INSTALLATION IN ST. PAUL (DETAIL)

And the Rat Laughed
By Nava Semel, Translated from the Hebrew by Miriam Shlesinger
Hybrid Publishers, 232 pages, $25.00

‘And the Rat Laughed” is an exquisitely wrought meditation on the present and future of Holocaust memory in Israel after the survivors are gone. Integrating story, legend, poetry, dream, science fiction and diary, Semel’s novel begins in 1999 and pivots on testimony given by a nameless Tel Aviv grandmother to her 12-year-old granddaughter interviewing her for a school project.

When she was 5, the grandmother was hidden in a potato pit by an antisemitic Polish couple who were paid to do so. The eponymous rat whom she befriends is her sole companion in the darkness of her cell. The trauma of isolation and abandonment turns into terror when she is repeatedly raped by the farmer’s son.

Israel has a less precious relationship to the Holocaust than has America. In this country it would verge on Shoah blasphemy to publish such a postmodern novel exploring the fate of memory in 21st-century Israel. So, despite Nava Semel’s impeccable credentials as a highly celebrated Israeli writer, daughter of survivors and sister of Israeli singer Shlomo Artzi, the English translation of “And the Rat Laughed” (Hebrew publication in 2001) is still unavailable in North America.

While the transmission of the Holocaust remains central to Semel’s novel, as it was in her groundbreaking 1985 short story collection, “A Hat of Glass,” Semel extends her scope of inquiry to include the distinctive experience of hidden children both during and after the Holocaust, a portrayal of the complexity of Jewish-Christian relations, belief in the power of art to serve as an emotional memory carrier, the fundamental yet ambiguous relationship between Holocaust memory and the State of Israel, and the informational yet distorting role of technology.

“The Legend” chapter portrays the danger inherent in transmitting Holocaust tales. The granddaughter, the third generation, is unable to comprehend the testimony — which may not have been clearly revealed by her grandmother — despite the girl’s attestation that her generation has heard everything. She makes a grotesque error by imagining and emphasizing the kindness of the Polish family who provided refuge. Distortion of the grandmother’s tale increases as it is divorced from its historical mooring.

Semel offers a transgressive version of the biblical theme of creation, pointing to the inner “bohu” — her phrase for traumatic memory — of survivors. The grandmother employs computer jargon to refer to God wanting to “upgrade” His creation, including the animal kingdom. The Creator endows animals with jealousy and the ability to weep. But the rat wants the ability to laugh. God will grant this only if the rodent hears another underground creature laugh.

On the verge of making the little girl laugh, the rat is stymied by the appearance in the pit of the farmer’s son, who brutally assaults the young victim. Semel inserts a deeply heretical, or at least radically skeptical, theological position, indicting the deity.

The author has the rat proclaim, “God, that son of a bitch, had cheated him, and had broken the promise .…”

The larger issue here is that a world that necessitates the hiding of children is deeply flawed, “… not just a glitch, it’s the total collapse of all systems.”

Semel’s novel offers a portrayal of Christianity during the Shoah that focuses on the exceptional case of a Christian helper. A priest named Father Stanislaw (Stash) is the “black angel” who saves the grandmother’s life. His wartime diary, the novel’s final chapter, is a prolonged meditation on theodicy and records his anguish at the moral and theological failures of his congregation.

The priest’s character makes it possible to parallel the suffering of two Jews: the grandmother as a young girl and Jesus. It is by mimicking rat-like characteristics that the priest succeeds in teaching the little girl to laugh.

Semel deftly treats issues that plague children who were hidden during World War II. The grandmother’s Holocaust trauma includes feelings of parental abandonment. She still expects her exterminated parents to appear and feels great anxiety whenever the doorbell rings. Moreover, she searches for their names in foreign telephone directories.

The pain of remembrance has resulted in a wall of silence between her and her own daughter, the second generation. The daughter admonishes her, “Mother, don’t you go messing up my daughter’s head.”

Revealing what is hidden — the grandmother is a retired X-ray technician — is easier said than done. It may be as Elie Wiesel attests, “whoever listens to a witness becomes a witness.”

But once the story is in the public domain, the consequences assume a life of their own. The old woman has one concern about what Semel calls potential “remembearers:” “Whatever the next storyteller adds worries her more than what he may leave out.” The rapist must never become the main character.

“The Dream” chapter is the most complex in terms of the future of Holocaust memory. It opens with a chronology of the “Girl & Rat Myth,” a short cycle of poems highlighting developments during the decades that have passed since the granddaughter’s classmates established a Girl & Rat internet website that includes poetry written by the hidden child (a separate chapter of the novel). Among the transformations of the myth are PanEuroDisney’s replacement of Mickey Mouse with Mickey Rat in 2020. In 2099 the ruins of the Madonna of the Rat Church (originally Father Stash’s parish) are discovered. The tale of survival has been transmitted in every imaginable medium, each generation offering its own interpretation.

Seeking the future of Holocaust memory in Israel in a post-religious and post-ecological disaster era, Semel’s narrator beams herself into the future, where she visits a bifurcated Jewish State. “TheIsrael” is a secular, apocalyptic, ahistorical garrison interested solely in its survival and not in Holocaust memory. Its embrace of the digital revolution results in both an obliteration of Zionist ideals and Jewish religion, and a “pathological distortion” of the future as cataclysmic.

The inhabitants of “Ju-Ideah” view the past as holy. Ju-Ideah is peopled by religiously intolerant orthodox intent on avoiding anything new. The inhabitants angrily reject any link between a Polish-born Jewish girl and Christianity, even when embodied by Stash’s rescue. The narrator receives a mezuzuah, which she describes as “a lucky charm the (Jews) have been nailing to the doorposts of their homes for thousands of years.” Semel’s futuristic narrator envisions continued claims of Holocaust denial and the impossibility of understanding the experience of survivors. The last survivor tells his great-great-grandchildren that comprehension of the Shoah will elude them. Consequently, the Holocaust is destined to remain an unmasterable trauma even while future generations bear responsibility for remembering.

Literary critics and others have acknowledged Semel’s considerable talent. She has won the American National Jewish Book Award for Children’s Literature, the Women Writers of the Mediterranean Award and the Israeli Prime Minister’s Prize.

“And the Rat Laughed” invites readers to imagine Holocaust memory and identity in a way that envisions the possible end of such memory in a secular Israel. It’s a tough invitation but it’s one that America should be offered.

The Holocaust Novel From Israel That America Can’t Handle