A Photographer’s Family Album, and Ours 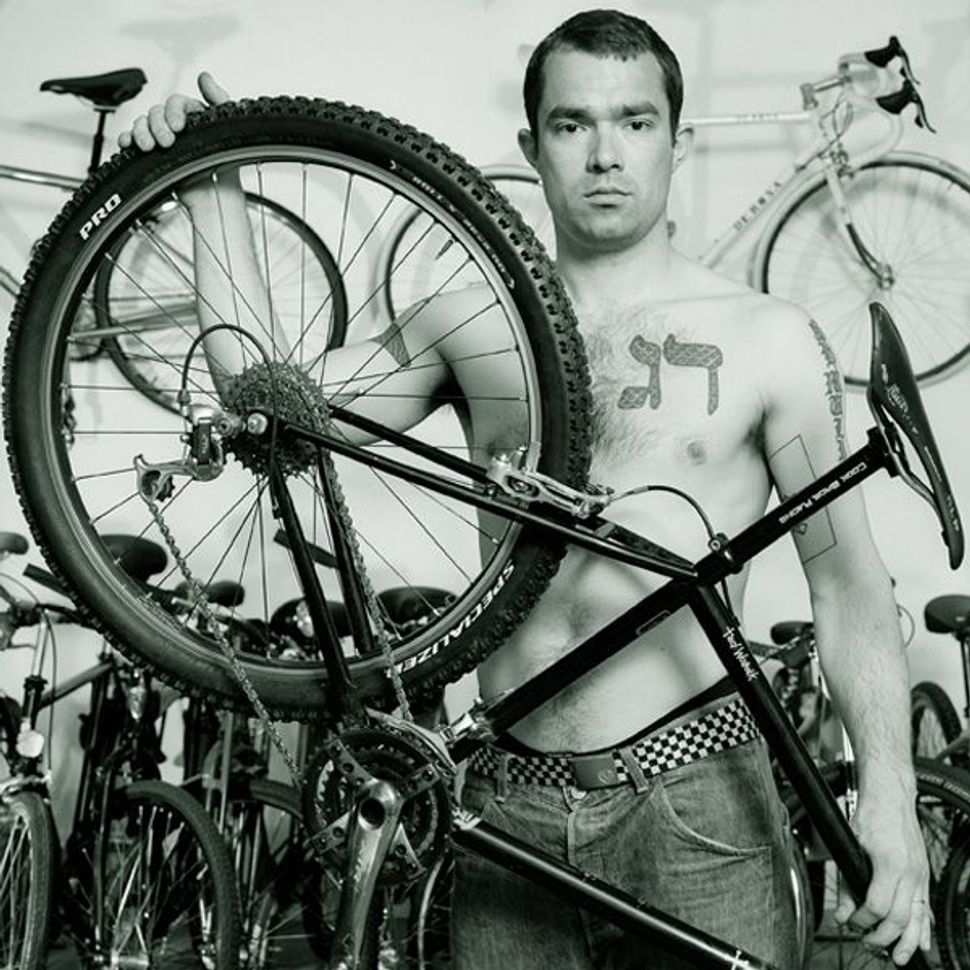 For most of us, family albums are packed tight with shots of smiling relatives lined up at life-cycle events: the bris, the bar mitzvah, the wedding. Such pictures do not interest Israeli photographer Vardi Kahana, who has taken the concept of the family album and exploded it with One Family, an exhibit currently on view at the Tel Aviv museum and set to open November 10 at New York’s Andrea Meislin Gallery.

“To the big question of Jewish-Israeli identity,” Kahana writes in her essay that accompanies the exhibition, “the photographs of my family provide a kaleidoscope of answers.” Though the 100 or so black-and-white photographs in the exhibition capture Kahana’s own extended family, One Family is also a reference to the broader tribe: The sprawling Kahana clan is a microcosm of the Jewish people.

And how the tribe has scattered. The photographs in One Family span 15 years and take us from Gaza to Copenhagen — and, perhaps more dramatically, from secular kibbutzim to hilltop caravans in the West Bank — documenting the tremendous geographic and ideological diversity in the Kahana family. Refreshingly, Kahana does not try to force a sense of commonality, but instead allows us to witness the deep contrasts that exist between the family members. “My project is to open the bubble and say: ‘Look! We are one family; we should know each other,” she said.

Appropriately, the root of this multigenerational show is a 1992 portrait of the family’s matriarchs: Kahana’s mother Rivka, and her two sisters, Leah and Esther. Second to their proud gazes framed by thick glasses, it is the ascending numbers — A-7760, A-7761, A-7762 — tattooed on their exposed forearms that grab our attention. Though it’s hard to imagine an account of three Israeli generations beginning anywhere other than Auschwitz, “Three Sisters” does not feel like a tired history lesson but instead like an intimate beginning to this specific family story.

From “Three Sisters,” the exhibition proceeds with no obvious geographic or generational organization. Trying to remember bloodlines or birth order is beside the point: What we get are faces — old and young, white and brown, Jewish and not — most of which stare bluntly into Kahana’s lens.

It’s clear from the start that Kahana is an expert at frontal portraiture — she’s been a photojournalist for 25 years — and many of the exhibit’s works, beginning with “Three Sisters,” are highly effective. In “Or and Amir,” one of the first photographs of the exhibition, we encounter two teenage sisters with stereotypical Middle Eastern faces: dark skin, dark eyes, full lips, broad noses. Like so many Israelis, they are hybrids, the daughters of Kahana’s Ashkenazic brother and his Sephardic wife. Hands on their hips, the two girls look at the camera with a kind of defiant attitude.

Likewise, despite its minimalism, it’s hard to look away from “Shmulik, Gadi, and Lior” because of the intense eyes of the three bald Israeli brothers.

In a full-body portrait of Kahana’s cousin Libi and her husband, we notice Libi’s crooked smile, which echoes that of her son, pictured in the framed portrait she holds. Her identical smile becomes more haunting than idiosyncratic when we read the caption: He was killed in Lebanon.

But the best photographs in this show are not those of faces alone. As Kahana shows us in her most compelling pieces, it is necessary to capture individuals in their specific environments in order to chronicle Jewish-Israeli identity. Shots of family members in their neighborhoods, in their gardens or even their beds have the ability to tell the most comprehensive stories.

Many of the locations at which she shoots her family are hyper-political. A religious family, clad in yarmulkes and headscarves, is shot against the surprisingly dramatic backdrop of windmills in Alonei Habashan, in the Golan Heights. In another photograph, Cousin Eta and her husband, Yosef, elders of the Hebron branch of the family, stand in front of their door in Hebron. Not an inch of paint is visible on the door, which is completely plastered with right-wing political bumper stickers. Another young couple stands against the backdrop of the Dome of the Rock from the Arab quarter of the Old City in Jerusalem, where they work helping Jews buy property. The intimacy of these photographs transforms generic landmarks into more precise settings and humanizes otherwise stereotypical characters.

But just as Kahana shows us the stereotypes, she also defies them. In “Neta,” she plays with our expectation of what a settler should look like by shooting a very pregnant Neta, Cousin Yonina’s daughter, as she stands silhouetted in a tank top and miniskirt against the Judean Hills in the West Bank, kissing her husband, Elad, who is outfitted in his army uniform.

While these overtly political places immediately contextualize the people in the photographs, private spaces offer a more subtle kind of depth. Aunt Esther and Uncle David seem particularly vulnerable because Kahana shoots them sitting on their beds in Jerusalem. The singular image of Aunt Miriam at Kibbutz Lehavot Habashan, holding a pot of flowers where her husband was killed in 1948, provides enough material to envision an entire life story.

As Kahana stands with me in the middle of One Family and tells me about Miriam and her kibbutz, no one seems to recognize her as the exhibit’s photographer; there is no image of her in the show. When I ask her why, she smiles and walks me to the exhibit’s final picture. It’s a large, moving photograph of her mother, Rivka, flanked by Kahana’s two children, Gil and Roni: “I call this my self-portrait.” 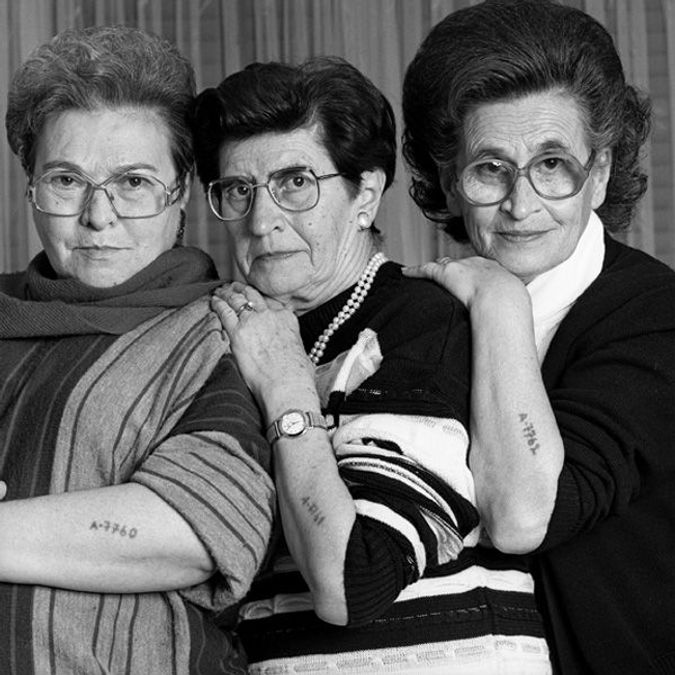 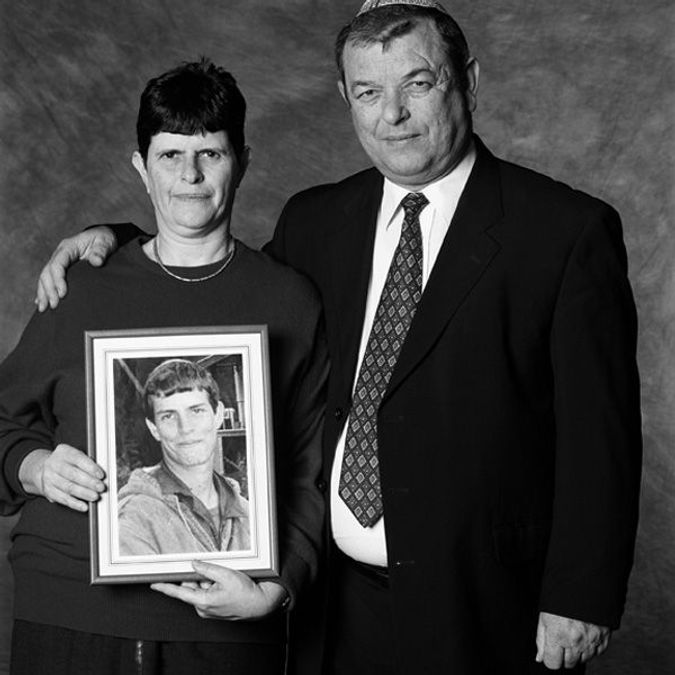 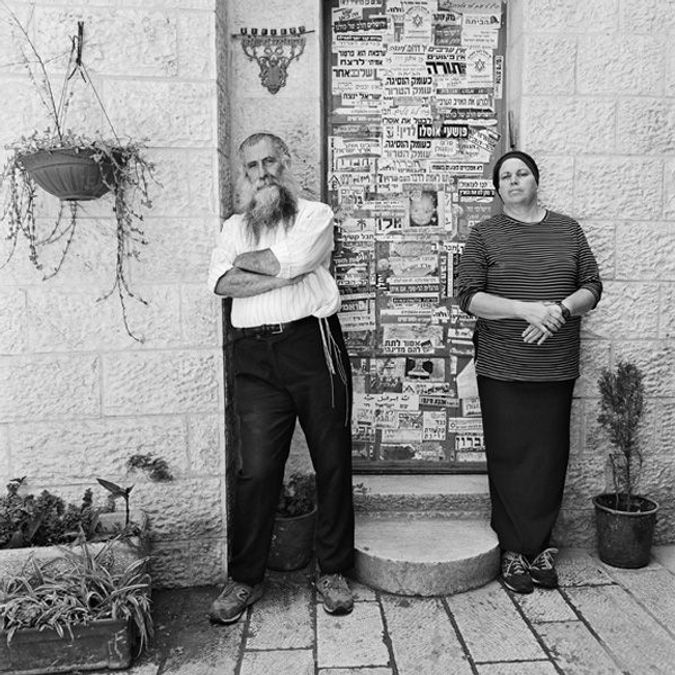 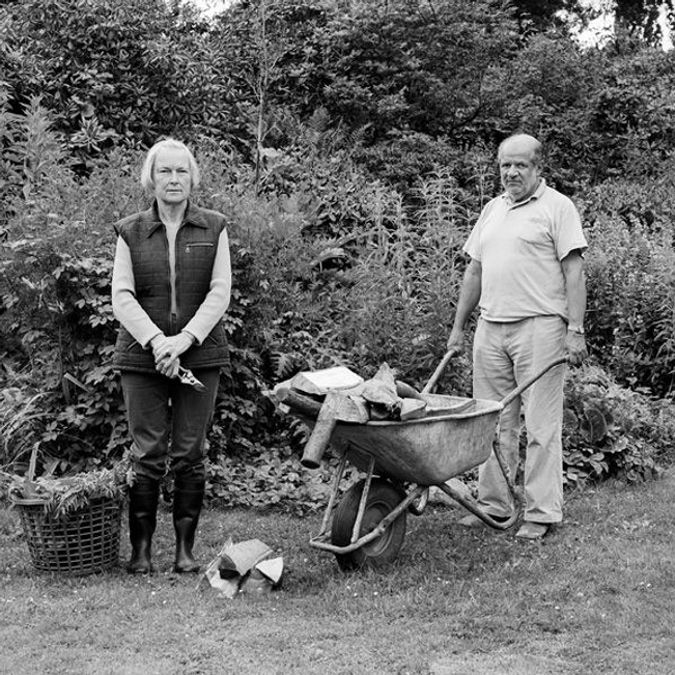 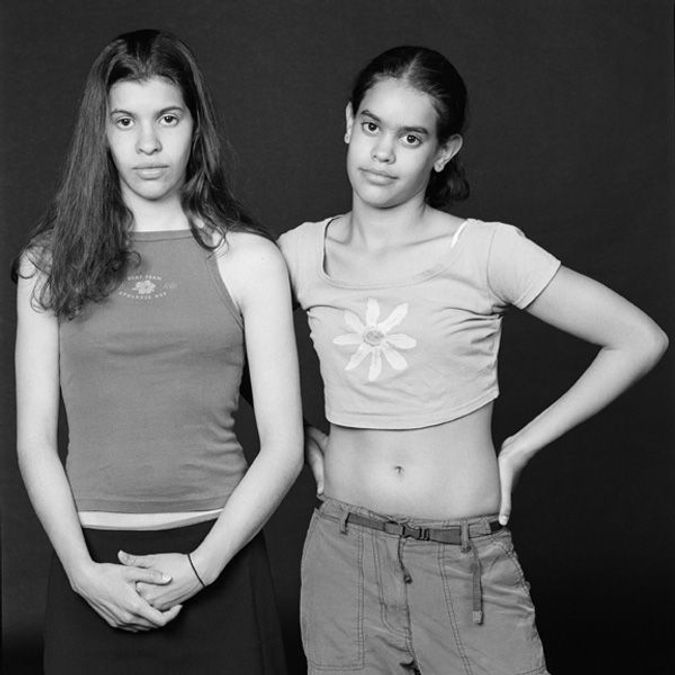 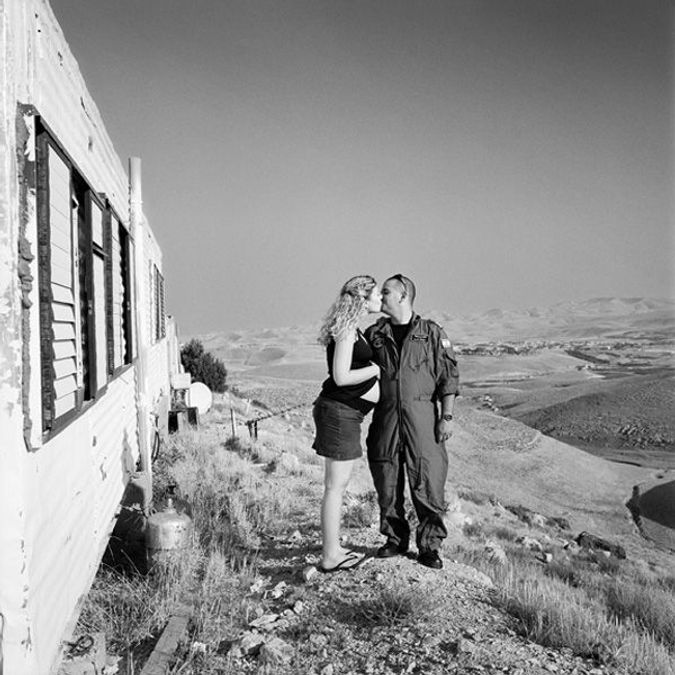 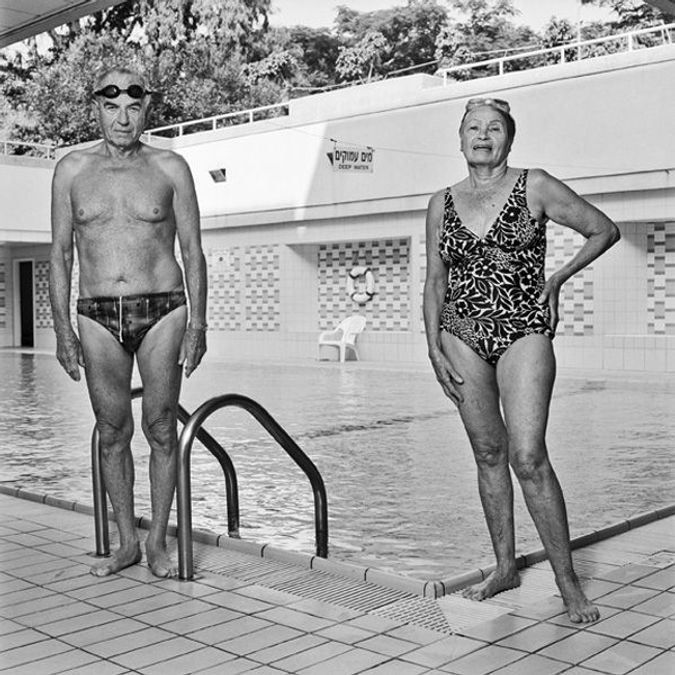 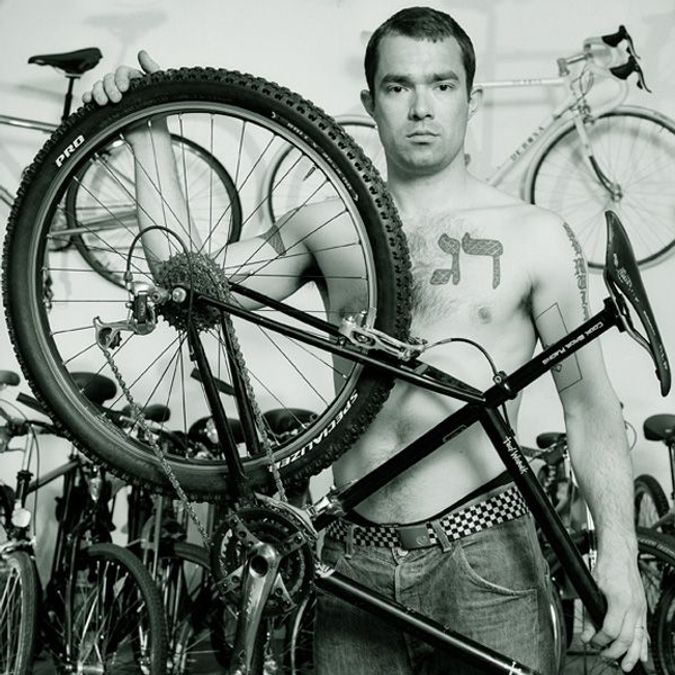 Bari Weiss is a Dorot fellow living in Jerusalem.

A Photographer’s Family Album, and Ours