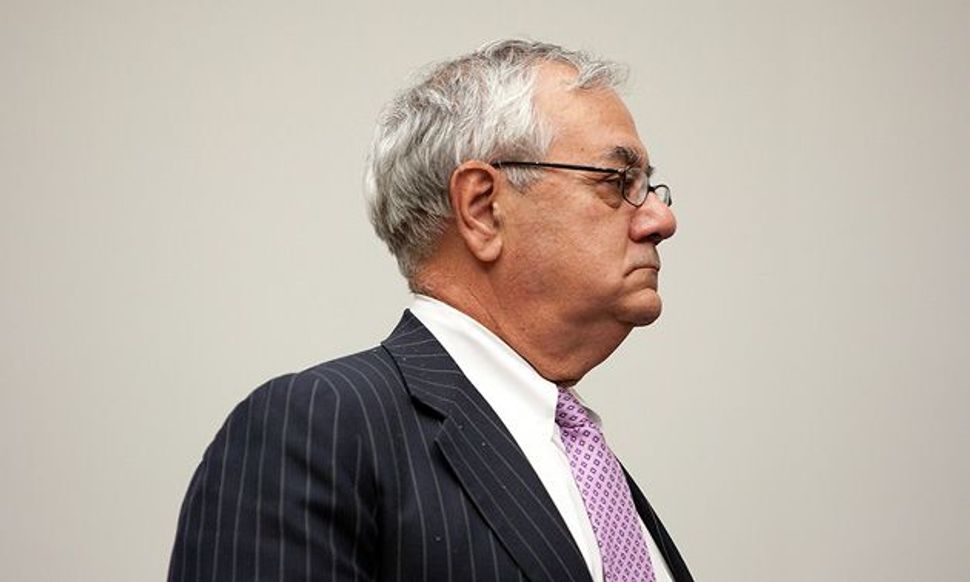 According to Stuart Weisberg’s “Barney Frank: The Story of America’s Only Left-Handed, Gay, Jewish Congressman,” that’s Congressman Barney Frank’s standard response to phone-chat pleasantries like “How are you?”

It’s probably also how the powerful chairman of the House financial services committee would greet this exhaustively researched but overdrawn new biography.

“Barney Frank” is “based on interviews with 150 people, including more than thirty hours with Frank himself,” according to its jacket copy. But while its rookie author succeeds in chronicling nearly every step of Frank’s personal evolution and political ascent, the book reads more like a medley of trivia, digressions and political back-stories than like a narrative of his life. In a chapter called “Bayonne Born and Bred,” do we really need a tangential paragraph on New Jersey native Sandra Dee, informing us she was “immortalized and satirized” in “Grease”?

It’s a shame, since Frank is one of the most fascinating — make that one of the few fascinating — members of Congress. Born in tough Bayonne, and now forever identified with his eastern Massachusetts constituency, Frank has carved a fearsome reputation for his acid wit, microprocessor-fast mind and hard-knuckle pragmatism.

He’s also, as the book’s subtitle claims, one of the few openly gay legislators in Washington, and one of just two openly gay Jewish members of the House (the other, Colorado Democrat Jared Polis, must be right-handed). These are both things that his adversaries have tried, to their own detriment, to use against him. “In society, there’s still a lot of prejudice,” he tells Weisberg with uncharacteristic understatement.

One of four children born to Elsie and (truck-stop owner) Sam Frank, Barnett Frank graduated Harvard University before becoming chief assistant to Boston mayor Kevin White in 1968, then a Massachusetts state legislator in 1972. In 1980, Frank ran for the U.S. House in Massachusetts’s 4th District, which includes the heavily Jewish town of Brookline, squeaking by an opponent to capture the seat he still occupies. He’s since been re-elected 13 times, and — through force of will, intellect and personality — has expanded his influence amid circumstances that sometimes seemed seriously injudicious.

The book begins on an awkward note, with Weisberg extolling “Barney” via a 10-page introduction. “Barney has a remarkable ability to simplify the issue at hand in a clever and witty way.” “With Barney, one never knows what’s coming next.” “Barney has a reputation for saying exactly what he believes, regardless of the political consequences or criticism from others.” Addressing the congressman by his first name seems a strategic error of balance that throws off the book’s perspective.

While Weisberg doesn’t examine Frank’s Jewishness in depth — peppering the book instead with accounts of High Holy Day politicking or a well-chosen “Oy vey iz mir” — he dedicates three chapters to Frank’s sexuality. Pricelessly, Weisberg quotes the late legendary House speaker Tip O’Neill nearly getting it right when warning a staffer that: “Barney Frank is gonna ‘come out of the room.’” Arguably, Frank’s journey as a gay man emerges as the most important factor in his political progress: He comes out to colleagues, fights right-wing smear campaigns, battles for marriage rights and generally rails against hypocrisy.

A short passage on Frank’s onetime spouse, economist Herb Moses, also offers a rare glimpse of the congressman’s private life. “It was like on the ‘Donna Reed Show,’” an unnamed friend tells Weisberg. “Barney would come home from work and kiss Herb as he entered the apartment.” Moses became Frank’s partner — and a companion at official events, much to the consternation of Conservative observers.

Weisberg spent nine years running a House committee that Frank initially chaired. Though the writer’s relationship with his subject undoubtedly gained him access that an academic biographer would lack, his privileged perspective becomes problematic. His touch feels too light when addressing such lapses as Frank’s patronizing of prostitute and pimp Stephen Gobie, which nearly derailed Frank’s career. “Barney thought that Gobie had potential but for many reasons had messed up his life. He tried to help him,” Weisberg writes. Maybe so, but the passage still feels like a whitewash.

Despite Weisberg’s obsessive tracking down of sources close to Frank, it’s also frustrating that “Barney Frank” never comes close to peeling back the layers of a supremely complicated character. It’s fascinating to learn about Frank from his 96-year-old 12th-grade English teacher (“very bright”) and from former Delaware governor Thomas Carper, who takes Frank’s coming out in his stride on a 1980s diplomatic visit to Israel. But while we get flashes of his intellect, grit and temper, we never get a genuine understanding of what makes Barney Frank who he is. The book seems more enamored of the political process than it does of its key player.

“Part of our job was to keep Barney away from people,” one campaign worker tells Weisberg about Frank’s first run for his House seat. “He was alienating everyone he came in contact with. During those two months, Barney was better in the abstract than in person.”