Squeezing the Cultural and Historical Juice Out of Love in ‘Jaffa’ 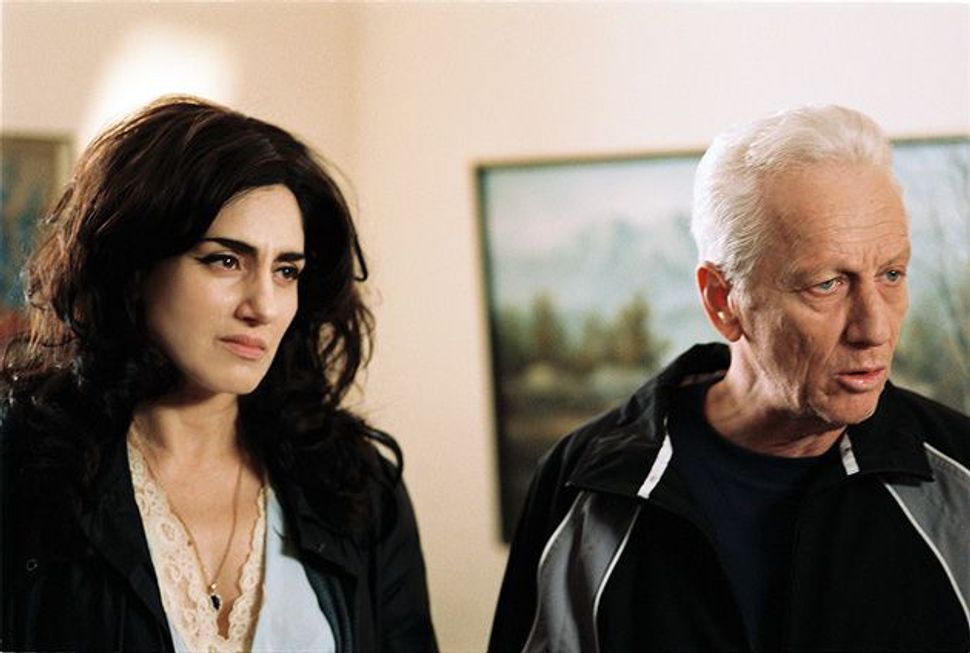 Scorned Parents: Osnat (Ronit Alkabetz) and Reuven (Moni Moshonov) are angry and disappointed with their daughter. Image by COURTESY OTHER ISRAEL FILM FESTIvAL

The Other Israel Film Festival opens on November 12, kicking off its third year of the cinematic exploration of Arabs in Israel. Keren Yedaya’s “Jaffa,” making its New York premiere at the festival, shouldn’t be missed. As a film, it has its weaknesses. Fortunately, it isn’t simply a film; it’s an emotionally raw, and brutally honest, appraisal of Israel’s possible future.

There is a near-biblical, Jacob-and-Esau resonance to the rivalry between Tawfiq and Meir for the paternal approval of Jaffa garage owner Reuven. Meir, Reuven’s actual son, is a loser on salary at the garage by virtue of birth rather than skill. As the character, Roy Assaf does well at encapsulating a sense of modern uselessness, frustration and entitlement; this ennui is familiar to Americans and Europeans, but here it is meant to represent his Israeli generation. Tawfiq is a hardworking mechanic who tries to do the right thing by his boss and to find a way to fit into the system, a tacit representative of Israeli Arabs. Tawfiq and Mali, Reuven’s daughter, are in love with each other, unbeknownst to anyone but the two of them, and Mali is pregnant with Tawfiq’s child.

Tawfiq and Mali’s love has blossomed in years of isolation, embraces exchanged in a car beside a highway. The couple resolve to marry abroad and have carefully planned their escape. But as anyone who has read “Romeo and Juliet” knows, the course of star-crossed lovers never does run smooth. On the day they are to leave, a tragedy changes everyone’s lives and points all the characters in different directions.

This review is spoiler-free. Just as the protagonists are surprised by the turn of events, the audience should have to deal with those shocks. And dealing with the progression of emotions and events as they happen is an important component of Yedaya’s larger, crucial message about the future of Israel and its relations to its Arab occupants and neighbors. Yedaya quietly asserts that we don’t always have the luxury of time to analyze: We need to deal with events as they occur.

It’s important to note that this is not a consistently good film. Without its latent political message, “Jaffa” could even be seen as slightly disappointing, with notable strengths balanced by evident weaknesses. The incomparable Ronit Elkabetz, for example, completely inhabits her role as Osnat, Reuven’s demanding wife; she manages to make operatic turns of mood believable rather than trite, and does so with finesse. Unfortunately, the virtuosity of Elkabetz and the wonderful Moni Moshonov as Osnat and Reuven only highlight the comparatively lackluster performances of Lily Igvy and Mahmoud Shalaby as Mali and Tawfiq. This Romeo and Juliet, despite the alleged passions of their love, seem, if anything, a little bored. There’s also some unseemly over-symbolism in the film: Hey, look, a coffee pot is about to boil over! Could that mean tensions will soon erupt in a scalding fountain of ugly ruin? Why, yes. Yes, it could.

Despite these imperfections, Jaffa places itself in a higher weight class because it offers up an artistic, even-handed and reasonable — although surreptitious and painful — analysis of Middle East politics. The events of history are not, Yedaya seems to contend, a question of “fault” or “blame.” This is not a novel idea by any stretch, but what gives the film gravitas is that she does not devalue either party’s history or suffering in making that statement. Yedaya makes crystal clear the lack of absolution: No one is blameless, but simultaneously, it’s not that these wrongs don’t matter. The horrible agony of Elkabetz and Moshonov in one scene is a disturbingly perfect picture of unspeakable misery. Accidents and lies can spread their wide shadow of darkness over generations. Yedaya recognizes the horrors of history, yet quietly insists that if we don’t get past pain and horror — and, by extension, if Israel cannot — there is no possibility of a true and lasting future.

The slightest moment in “Jaffa” can lead viewers down a path of existential contemplation: The viewer takes in what is, and is made to wonder what could have been. Watching one character pace back and forth, waiting for someone beneath the eerie glow of streetlamps in a busy intersection, takes on a new tone as we know that he is waiting for someone who is supposed to be meeting him but who, after observing him from afar, will instead take the easy way out: avoidance. This is not to say that the Middle East quagmire is the result of a series of misunderstandings — rather, that it is a morass of conflicting intentions and goals. As with many things, it is easier to evade contact than to engage.

“Don’t ruin everything,” Mali’s parents implore her, at a point when Mali is trying to decide whether to tell the truth or to simply keep living a comfortable lie. Keep lying, they seem to say, or you will forfeit your family and your love.

After all, there is an approximation of peace afforded to those who sequester themselves and ignore reality. Just as the film’s protagonists flee Jaffa for the greener grass of Ramat Gan, it’s possible for Jews in Israel to live in the kind of cocoon aptly envisioned in Eytan Fox’s 2006 film “The Bubble.” In Ramat Gan, for example, the family of this film can live in a lovely self-enclosed world where a man can read “The Secret Garden” to his granddaughter beneath a pink nightlight before the child goes to sleep. Surely, this is the peace that everyone seeks.

And yet this peace is an illusion: Truth is inexorable, and the “other” is simply minutes away. When Mali tries to right a wrong by telling her parents the truth about a secret she has kept for years, she destroys the fragile cease-fire that has been created by the silence of a fiction.

The only way to attain true and lasting peace, Yedaya boldly contends, is to disavow those who have gone before you — and it is incumbent upon you to do so, in the name of those who will come afterward. Like the characters in this film, you may have to renounce the family that made you, and try to forget the very real wrongs that have been done to you. You will be unable to do so completely. And despite this, you may, Yedaya quietly and beautifully asserts, have to embark on the excruciating move to a world beyond fault — if only to be able to go on living and to go forward. Your homeland, in short, may not be exactly where or what you expected, or hoped, it to be.

The film opens with a view of the skyline of Jaffa as seen from the Tel Aviv promenade. It ends with an image of a young girl by the ocean, framed by a clear blue sky. What is Jaffa? It is not the silhouette of a clock tower, or an idealized conception of land or territory. Jaffa is the place where people mix with one another. In doing so, they inevitably will create new people who will have to learn to live with the churning, tumultuous conflict in their very veins.

Squeezing the Cultural and Historical Juice Out of Love in ‘Jaffa’