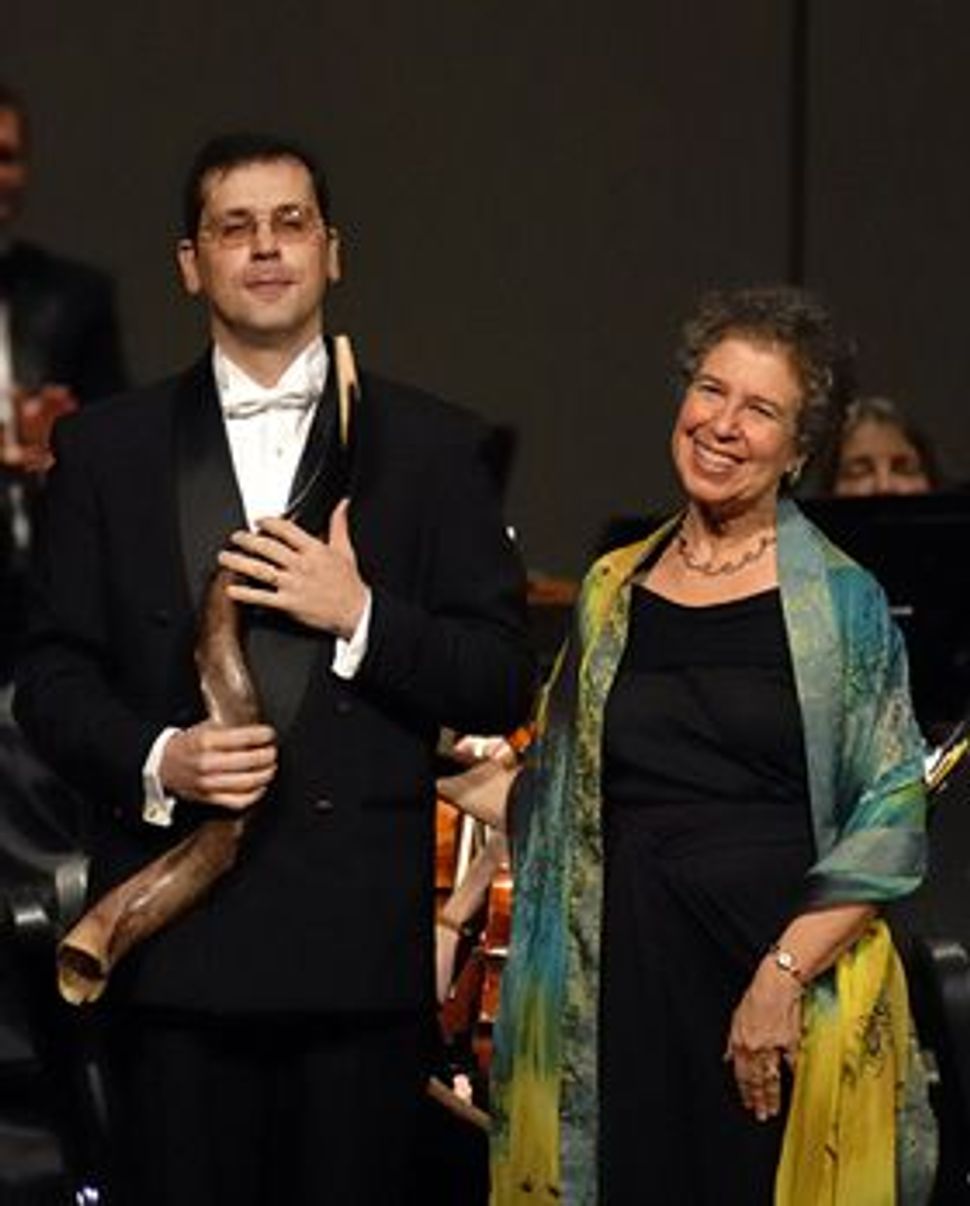 After the Blow, the Bow: Haim Avitsur and Meira Warshauer take their applause. Image by Ed Zirkle 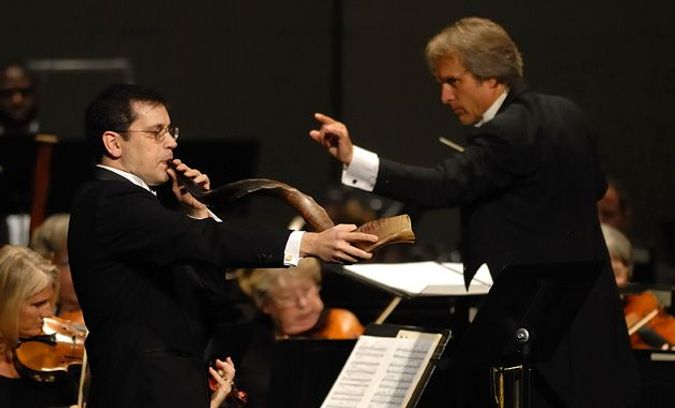 The Raw and the Cooked: Haim Avitsur playing shofar with the Wilmington Symphony Orchestra. Image by Ed Zirkle

Composer Meira Warshauer has taken the shofar out of the synagogue and into the concert hall.

Though she is not the first to use the shofar in a concert setting, her concerto for shofar/trombone soloist and orchestra, called “Tekeeyah (a call),” highlights the shofar’s range as an instrument, beyond its traditional ritual role.

The concerto, which premiered on October 24 with shofar/trombone soloist Haim Avitsur and the Wilmington Symphony Orchestra in Wilmington, N.C., opens with the surprisingly gentle, almost spooky whispering of air into the shofar. The quiet, sustained notes segue into pulsations and glissandos, then strengthen, rising and dropping until they resolve into an E, one of the two core notes of Avitsur’s shofar (each shofar has its own unique sound). The trombone develops the theme with sweeping gestures, repeated notes and long melodic phrases, supported by the orchestra. When the shofar rejoins the instruments, the music builds to a crescendo. “The walls protecting ourselves from our own truths come down in that sound,” said Warshauer, who envisions the concerto as reflective of the human journey. “We are energized to break our patterns, get back to our core goodness, and stand up for justice and healing in the world.” An ethereal, evocative section follows, meditative, lyrical, soulful and open. The concerto ends with heroic orchestral fanfare and a triumphant tekiyah gedolah on the shofar’s high C, a majestic celebration of life and love. 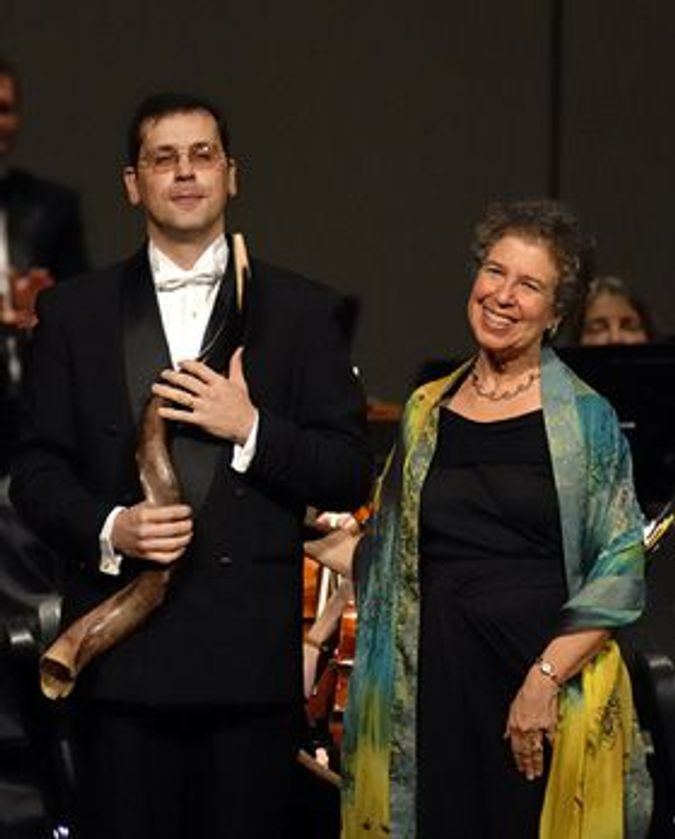 After the Blow, the Bow: Haim Avitsur and Meira Warshauer take their applause. Image by Ed Zirkle

“What is t’ka bashofar [call of the shofar]?” Warshauer asked. “I take that concept deeper into the notion that the shofar calls us into being.” Warshauer pointed out that our only obligation on Rosh Hashanah is to hear the shofar: “Each of us has a calling in life. That term is not accidental. We’re called to be the best we can be — and we can do it by continuing to listen to the original call [of the shofar]… to care for and heal our suffering world.”

Warshauer, 60, first heard the shofar’s breathy sound at a commemoration of Yom HaShoah in Columbia, S.C., where she lives. “There were six quiet sounds for the 6 million. They were mournful, like a sigh,” she recalled. “So I knew shofar had a range of emotional capability, from the piercingly intense sound we know well, to a full and embracing sound when played quietly.” She has tried to balance the experimental and the traditional in this concerto, even going back to the Shulchan Aruch (Code of Jewish Law) for a review of laws pertaining to the shofar. Many of the rhythms are in threes, reflective of the three shofar calls: tekeeyah (one long tone), shevarim (three shorter tones) and teruah (at least nine staccato notes). Based on a Talmudic difference of opinion, Sephardim render the teruah as one long, trembling moan instead.

New York-based composer Raphael Mostel, who has studied the use of the shofar and composed more than 18 works with the ram’s horn, adapts the famous “raw and cooked” analogy of anthropologist Claude Lévi-Strauss to describe its power. “Instruments in an orchestra are ‘cooked,’” he said. “They are well behaved. The essence of the shofar is its wildness. It remains close to its original state, a horn grown by an animal. It doesn’t try to hide or blend in.” In an article that appeared in the Forward in 2002, Mostel wrote, “The call of the shofar focuses our minds on what is essential, what is eternal… no one can be indifferent to its rude wail.”

Contemporary composers such as Alvin Curran incorporate the shofar into their music, but most do not deviate from the traditional calls, perhaps because of the shofar’s unpredictability. It is this quality of ambiguity — the shofar’s lack of an exact note — that wakes up listeners, Mostel explained: “The shofar is in that territory beyond perfect and beautiful. This ambiguity of pitch goes against the grain of so much music. It simply can’t be nailed down.”

Avitsur can coax 12 notes from his shofar that match normative pitches (not all are as stable as E and C), but the sound remains so distinctive that the ear picks it up amid all the other instruments. “The sound is alive,” he said. “It came from a living animal. Maybe that’s the magic. The same note on the trombone has a constructed, cultivated sound, man-shaped and manipulated.”

The Israeli-born Avitsur, 37, was the ba’al tokeah (shofar blower) at the JCC in Manhattan for six years, has premiered more than 60 new pieces for trombone, and is a trombone professor at the West Chester University’s School of Music in Pennsylvania and at Queens College’s Aaron Copland School of Music. In a rehearsal at his Manhattan apartment prior to the concert, he acknowledged the difficulty of reproducing a range of pitches on the shofar. “Ouch,” he said, pointing out how tiny the shofar’s mouth opening is in comparison with that of the trombone. “There’s no other word to describe it. I’m not blowing the shofar, I am playing it. It’s a completely new ball game.” Oo-wah-oo-wah-oo-wah, his shofar oscillated between the strong E and C sounds. The pulsations, accents and hairpins nudged open the heart. “The sound is meant to grab the heart and rally the person,” he said. “There’s so much this instrument is capable of producing that we miss when we only hear it go ‘Tah!’”

Warshauer’s exploration of the shofar mirrors her own journey through Judaism. Raised in North Carolina in a Reform Jewish home, she experimented with Eastern religions and meditation. She found comfort in the universal teachings of Sufism, which focuses on the healing vibrations of sound. At a Sufi music camp, she encountered a melody by Rabbi Shlomo Carlebach, “Return Again,” which motivated her to return to her own tradition. “I had never heard of Carlebach,” Warshauer said. Now, she said, she “sees the world through Jewish eyes. That’s the spiritual door for me. Music is the way I can communicate the wisdom of our tradition both for Jews and non-Jews. I can do that in an honest and enriching way because it is my tradition, I haven’t borrowed it.”

Currently a visiting artist at Coastal Carolina University in Conway, S.C., Warshauer conceived of the concerto after the premiere of her “Symphony No. 1: Living, Breathing Earth,” in 2007 in Hickory, N.C. There she met Avitsur, who was a soloist in a trombone concerto on the same program. “The symphony was about saving the world,” she recalled, “a vision of the earth being healed that would inspire all of us to do all we could to protect the earth. I woke up the morning after the premiere and realized that nothing had changed. We know what to do, but inside we haven’t changed. The shofar is meant to provide that wake-up call.”

November performances of “Tekeeyah” at the Porter Center for Performing Arts and at the Ira & Nancy Koger Center for the Arts will be followed by ones at the Western Piedmont Symphony in Hickory, N.C., and the Dayton Philharmonic Orchestra in Dayton, Ohio. For more information, visit www.meirawarshauer.com.

Rahel Musleah is an award-winning journalist, author and singer. She blogs at www.rahelsjewishindia.com.