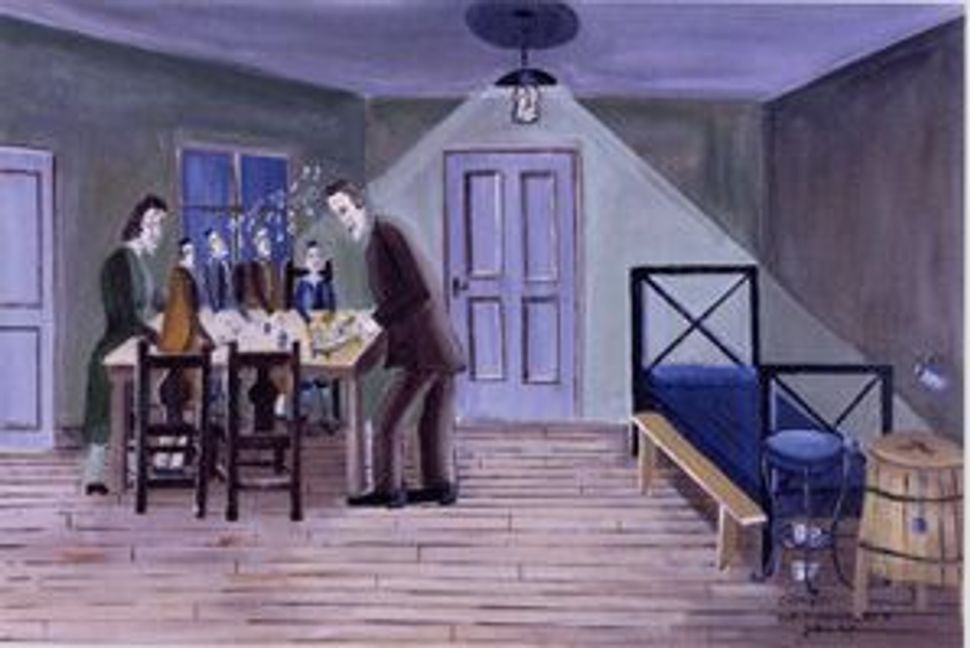 They Called Me Mayer July: Painted Memories of a Jewish Childhood in Poland Before the Holocaust 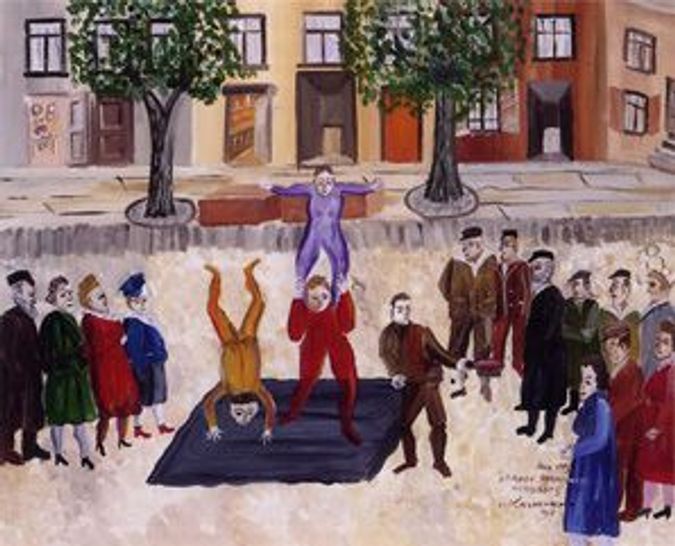 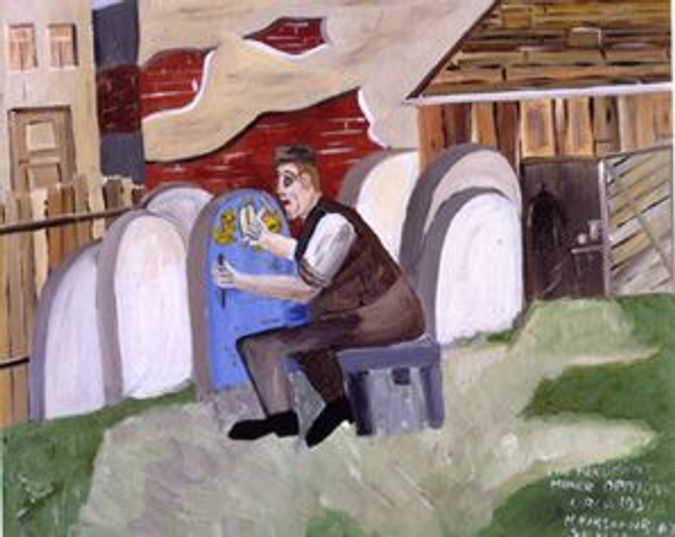 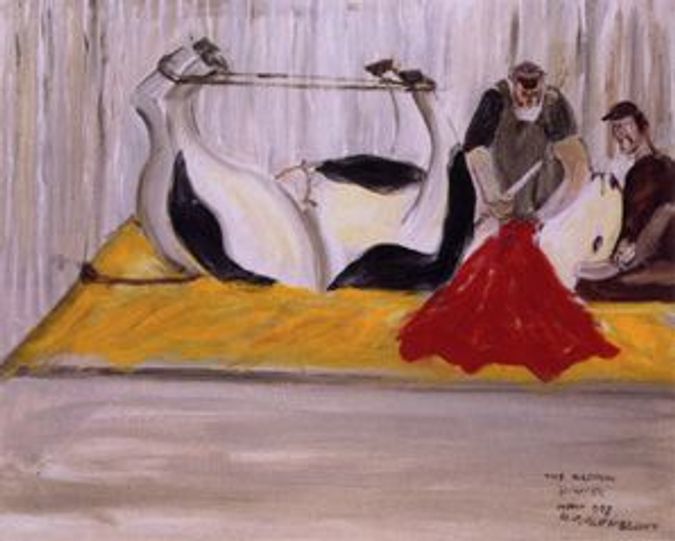 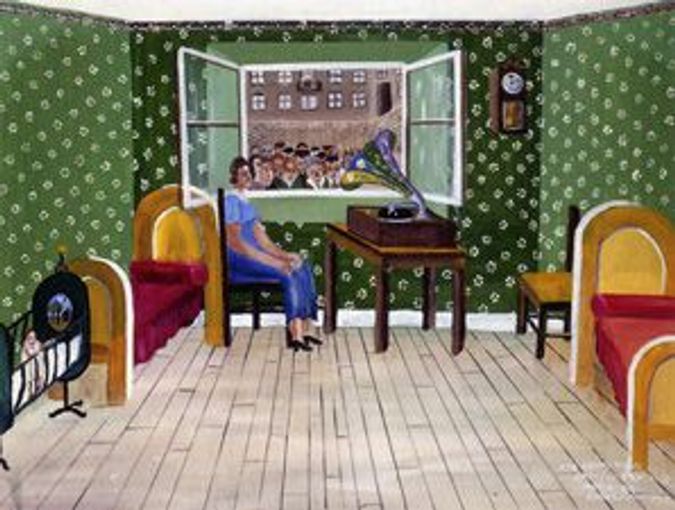 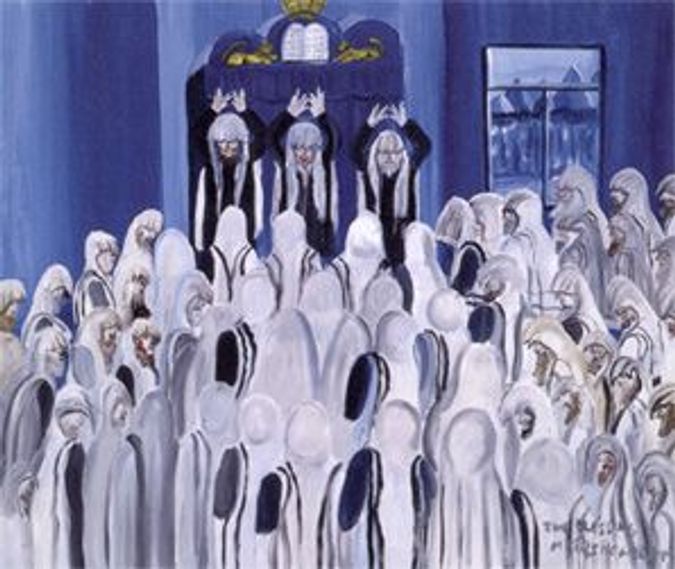 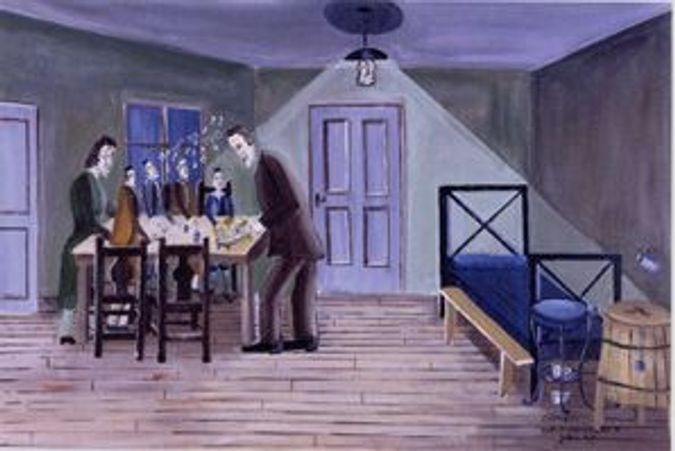 Mayer Kirshenblatt was born in 1916 in the Polish town of Apt. In 1934, when he was 17, Mayer, his mother and his three siblings immigrated to Toronto to join his father, who had made the trip six years prior. The family ran a paint and wallpaper store. In 1990, after a lifetime of selling paints, Kirshenblatt, retired and at loose ends, decided to pick up a paintbrush himself, and from its tip the world of his youth poured forth.

Kirshenblatt’s canvasses, together with a stunningly vivid text — the product of four decades’ worth of interviews with his daughter, noted New York University folklorist Barbara Kirshenblatt-Gimblett — have now been issued in a handsome volume by the University of California Press, and the result is a marvel: With his scrupulously recalled images, Kirshenblatt has managed to do no less than create a new visual language for describing pre-war Eastern European life. In stark contrast with the black-and-white record that has made up our vision heretofore, Kirshenblatt’s paintings are untainted by the horrors to come. They offer a picture not of Polish Jewish life as it was before tragedy struck, but simply as it was. If Chagall was the shtetl’s mythmaker, then Kirshenblatt is his antithesis: a shtetl anthropologist.

The book — the product at once of scholarly rigor and a boy’s sense of wonder, respect for the dead and an even greater respect for the living, ethnographic exactitude and artistic style, a yearning born of loss and a synthesis born of collaboration — is a book like no other.

“They Called Me Mayer July” unfolds not in a grand narrative arc, but in small, bite-size anecdotes, often no longer than a paragraph or two. It is a style, Kirshenblatt-Gimblett writes in the book’s afterword, “more picaresque than bildungsroman.” Like his images, Kirshenblatt’s episodes can stand alone, but they offer more punch when taken together.

While the classic Chagall figure is ever floating skyward, its Kirshenblatt corollary is nothing if not earthbound. The only whitewashing that happens here is literal, as when one of the town’s rabbis repainted the study hall’s walls after a less devout soul had stenciled them with flowers and butterflies. Kirshenblatt’s town, which he often calls by its Polish name, Opatów, is a world of prostitutes and chamber pots, outhouses and broken wind. It’s a world of colorful nicknames: Simkhe the Scab, Avrum the Lump, Yosl the Little Square Noodle, and Shmiel the Dog. Sometimes, Kirshenblatt writes, the nicknames sprang from no apparent reality, but in other cases the reason was all too clear. Kirshenblatt tells the story of his poor cousin Malkele, who one day fell into a latrine. Her nickname? Malkele drek.

The book’s title is based on the author’s own nickname, or at least a translation of it. “Everybody in town had a nickname,” Kirshenblatt writes. “Mine was Mayer tamez, Mayer July, because July was the hottest month of the year. Mayer tamez means Crazy Mayer. People get excited when it is hot, and I was an excitable kid.” Excitable indeed. Kirshenblatt was someone with his finger in every pie — boundlessly curious, mischievous to the core, a teacher’s nightmare.

“I failed one grade of public school because I played hooky,” he writes. “I was too busy watching everything that was going on in town. I would spend hours observing the blacksmith and the tinsmith, the ropemaker and the cooper, the mills and the carp ponds, and the town square on market day, when all the peasants came to town.”

Given the fact that he’s a painter without formal training, it’s temping to call Kirshenblatt’s work “Outsider Art,” but the label, with its intimations of a life lived on society’s periphery (or maybe even in the loony bin), doesn’t really fit. If anything, he comes across as the consummate “insider.” “He has often said of himself that he is a doer, not a watcher,” his daughter writes, “he likes to be a participant and active observer, not a voyeur.” It is a quality that he took with him across the Atlantic. In his adult life, Kirshenblatt became an enthusiastic camper and sailor, a collector of antique clocks and a restorer of furniture.

This spirit of “active observation” is apparent throughout Kirshenblatt’s book. He explains not only what his townspeople did, but how they did it. Indeed, so keen is his understanding of the inner workings of things that the book at points reads like a “How To” manual. He offers illustrated sections on how to make a dreidel, a whistle, a shoe, a brush, even a shofar from a willow branch.

Which is not to say that Kirshenblatt lacks a storyteller’s gifts. Like all good raconteurs, he is drawn to the bizarre and unusual: those in town who specialized in disabling people so they wouldn’t be drafted (one good at giving hernias; another, a specialist in lopping off trigger fingers) or the wealthy Winona Ryder antecedent who stuffs a live fish down her fancy blouse. But alongside this, Kirshenblatt also displays an understanding of the rhythm and texture of everyday town life: its trades, its politics, its religious diversity, its sounds and its smells.

“The Called Me Mayer July,” is a memoir, but this too is a label that fits imperfectly. Kirshenblatt’s telling cannot really be termed a “confession.” As his daughter again helpfully points out, Kirshenblatt’s narrative mode, “because it is more concerned with the palpable world than with interiority,” can best be understood as “extrospective.”

Kirshenblatt will often end his stories with a nice little kicker. Sometimes, these are mournful. Of his uncle Yankl — a handsome ladies’ man who lived in Warsaw — Kirshenblatt writes, he “disappeared like the others.” But more often than not, these little codas are more wry and whimsical than they are elegiac. Never one for organized study, Kirshenblatt suffered in a JCC painting class; the model, he said, moved too quickly from pose to pose. “My daughter told me to forget about the classes and paint from memory,” he writes. “The teacher also encouraged me to work on my own.”

A selection of images from “They Called Me Mayer July” will be on display at the Judah L. Magnes Museum in Berkeley, Calif., until January 13, 2008, and at museums in Atlanta, New York, Amsterdam and Warsaw in the months and years thereafter.