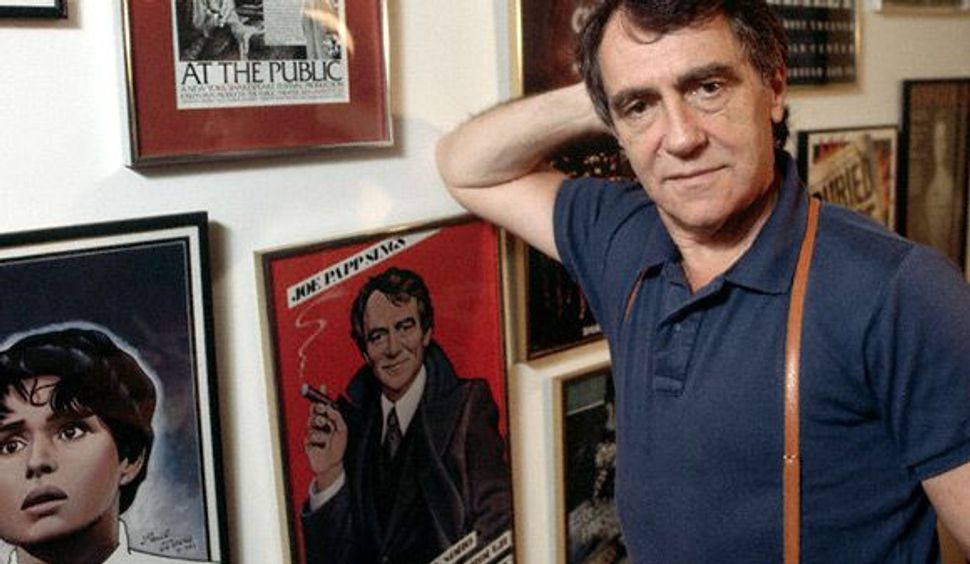 The Brooklyn-born Jewish theatrical producer and director Joseph Papp (born Joseph Papirofsky) died of prostate cancer almost exactly eighteen years ago, and has never been more missed, as “Free for All: Joe Papp, The Public, and the Greatest Theater Story Ever Told,” a new oral history from Doubleday Publishers, proves.

The value of the book, by longtime LA Times film critic Kenneth Turan, is that it is not really a new book, but a patchwork of interviews done over 20 years ago, only to be rejected by the notoriously irascible Papp. The intervening years have provided, an excellent biography by Helen Epstein, “Joe Papp: An American Life” (1994) but Turan’s book has its own historical, documentary value, with personal reminiscences from Papp’s sister Rhoda Lifschutz about their mixed Polish-Lithuanian roots and how the majority of their family were murdered in the Holocaust.

The harsh poverty into which little “Yussel” Papirofsky, as his family called him, was born, as well as his laborer father’s piety, made a lasting impression. Papp told Turan about his father davening in a modest storefront shul: “These were serious working people who prayed every day.” At age twelve, Papp landed a gig as a boy soprano at a Sephardic synagogue on Ocean Parkway in Brooklyn, and an intense performing career was launched. Papp states in “Free for All”: “What I’ve always experienced more intensely than poverty[…] is antisemitism. I always feel it’s just below the surface: scratch in some way and a lot of it will come out.” This motivated Papp to fight, as he explains, “for any aspect of minority rights, black, Hispanic, and so on. To me, intolerance is a greater threat than poverty.”

Ever combative, Papp brought Shakespeare to an unprecedented range of New Yorkers, and focused on social ills which poverty and racism can bring in a long series of productions like the harrowing 1974 prison drama “Short Eyes,” which I still vividly recall, having attended a performance that, in those rough days of New York life, seemed coruscatingly authentic. This sometimes harrowing realism, which results in electrifyingly memorable theater, is Papp’s legacy, desperately needed on the commercial, embalmed Broadway of today.

Watch a 1978 interview of Joseph Papp by Barbaralee Diamonstein below.