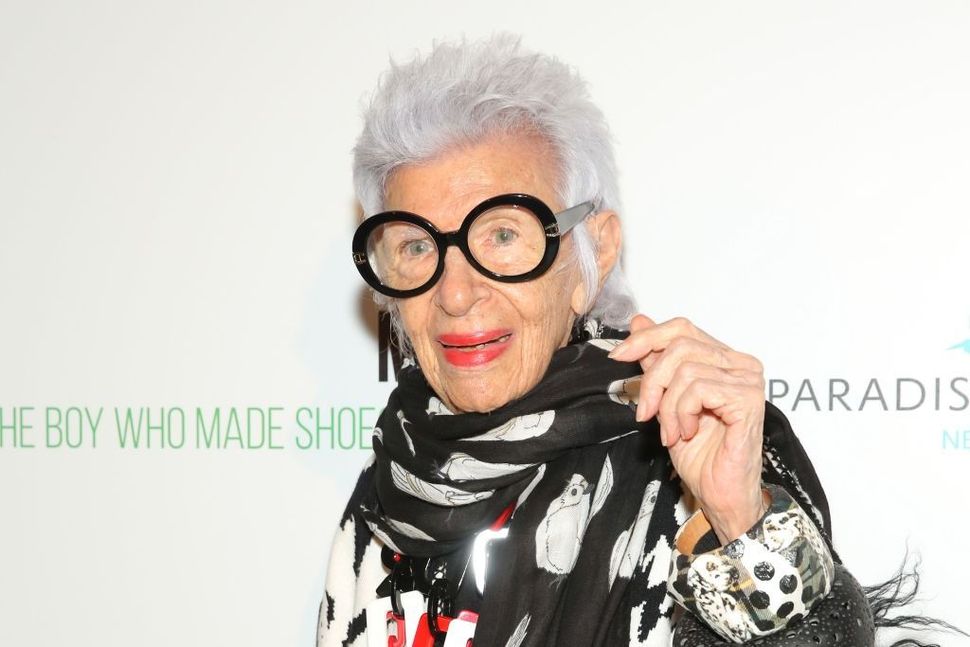 88-year-old Iris Barrel Apfel, born to a Jewish family in Astoria, Queens, has long inspired a fashion world in-crowd with her sharp eye for mixing and matching accessories in serendipitous, joyous ways. A inspired collector and shopper, not a designer, Apfel is being honored with a traveling exhibit of her fashion finds, “Rare Bird of Fashion: The Irreverent Iris Apfel” which runs until February 7, 2010 at The Peabody Essex Museum in Salem, Massachusetts, after previous stopovers at New York’s Metropolitan Museum; the Norton Museum of Art in West Palm Beach, Florida; and the Nassau County Museum of Art.

Examples of her witty juxtapositions on display include a Lanvin silk taffeta gown accessorized with a 19th century silver and amber arm bracelet from Bhutan, and cuff bracelet from Tibet, . These pan-cultural mixes gave Apfel a reputation for eccentricity years ago, but her ardent fans include Jewish designer Isaac Mizrahi, who recently told The Boston Globe that until recently, people “thought of Iris as a nut. I never thought she was a nut. I thought she had a great eye and was amazing.’’

Other amazed friends include the Paris-based Israeli designer Alber Elbaz, described by Apfel in a recent interview as “just like a Jewish mother. He [is] so sweet. I think he’s a big talent. And I always like when someone is a talent and a person.” Clearly both of these herself, Apfel is a fiery, passionate collector, like Walter Benjamin, whose essay “Unpacking My Library” asserts that “ownership is the most intimate relationship one can have to objects.” For sharing her brightly vivid intimacies, thanks are due to Iris Apfel.

Watch two short videos below. The first is a short interview with Iris Apfel, produced for the Peabody Essex Museum exhibition, Rare Bird of Fashion: The Irreverent Iris Apfel.”

The second is a short video on Iris Apfel’s design of a window display at Nordstrom Northshore in Peabody, Massachusetts last month.