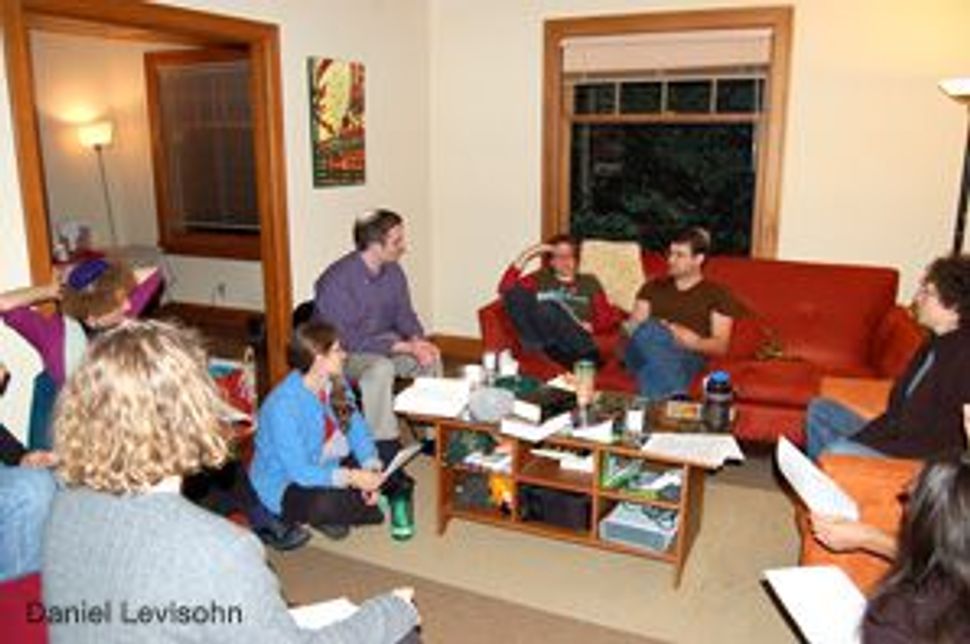 GETTING PERSONAL: Members of Seattle's Kavana study together in a partner's apartment on a Wednesday night in October

The Jewish community of Seattle is tapping into the city’s entrepreneurial spirit by taking a risk on innovative programs designed to transform local Jewish life. 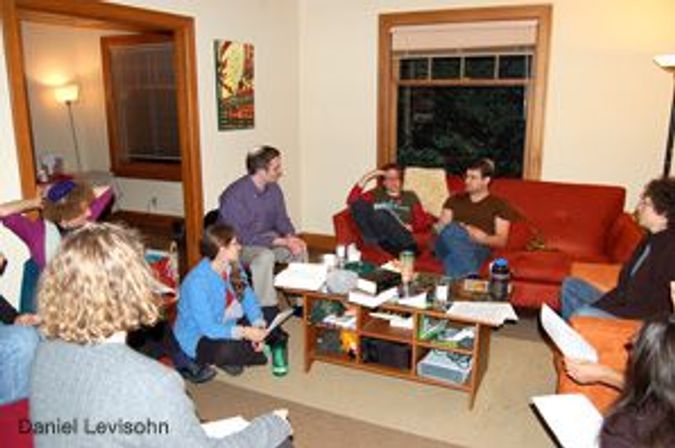 GETTING PERSONAL: Members of Seattle's Kavana study together in a partner's apartment on a Wednesday night in October

For the past three years, the Levitan Innovation Award has given $10,000 to a local organization with a creative program designed to increase Jewish engagement around Washington State’s Puget Sound. At a time when the Jewish philanthropic community is investing large amounts of money in the search of the next big idea with the potential to quickly transform the Jewish community at large, the award is investing smaller amounts in a smaller area, around Seattle, hoping to cultivate a local culture that takes risks on new Jewish ventures and entrepreneurial leaders.

The award was established in 2005 by Dan Levitan, a former Wall Street manager who operates a venture capital firm in Seattle called Maveron, and his wife, Stacey. Every year, five committee members evaluate project proposals and choose one that offers a new model or approach.

“It follows a trend [in which] Seattle is a national leader. That’s acting as a grass-roots incubator of innovation,” said Rob Spitzer, who sits on the award’s evaluation committee. “We have many, many startups, most of which don’t survive, and some of which create meaningful change. It’s consistent with Seattle’s tech culture in its approach.”

In recent years, Seattle has attracted a growing number of unaffiliated Jews. Each of the Levitan award winners has created, in a unique way, a program that reaches out to them with multiple points of entry into the Jewish community outside of familiar institutional boundaries.

This year’s winner was Jconnect, a program run through Hillel at the University of Washington that creates specialized programs for Jews in their 20s and early 30s living around Seattle. Jconnect hosts events, such as the monthly Jews ’n Brews, at different bars around the city, as well as cooking classes, social-justice excursions and Purim parties at art galleries. A few weeks ago, Jconnect also began its yearlong Jewish-learning initiative, with weekly classes on Judaism designed specifically for its young demographic. The organization wants to attract interfaith couples who may not have found a comfortable place in the Jewish community, so an introduction to Judaism class will double as a conversion course for non-Jewish partners.

“One of the things we found is that we have this really large segment of young adults who are dating folks who are not Jewish, and they are all interested in exploring Judaism,” said Rabbi Will Berkovitz, Greenstein Family executive director of Hillel at U.W. “[Jconnect] is developing a holistic program that creates a welcoming environment for these people so they don’t feel alienated by the Jewish community but feel welcomed.”

Last year’s award winner, Kavana, is a nondenominational sacred community that eschews the congregational model for a “cooperative” approach. When the organization won the award, Suzi LeVine, a former Expedia executive, and Rachel Nussbaum, a local Conservative rabbi, had a business plan but had yet to do any programming.

“They angel-invested in us,” LeVine said, referring to the investment-banking term for someone who provides a startup company with money to get an idea off the ground.

Instead of members, Kavana has “partners” who are expected to attend events each month, lead community initiatives and make a meaningful financial contribution, a suggested 1%-2% of their gross income. They pray together, but also study and socialize on a regular basis, often in each other’s homes. It aims to remain highly personal and intimate, growing no larger than 100 to 120 households before it would split into new “pods” that would maintain the cooperative spirit. Kavana currently has 80 partners.

“The part of it that I can’t escape is that I’m extremely drawn to the energy and motivations of the people who go,” said Kimberly Steadman, a 33-year-old program manager with Microsoft who has been active with Kavana as she considers converting to Judaism. “Kavana has turned what is a casual practice for a lot of people into an extremely engaging communal environment.”

A one-time award of $10,000 is not enough to keep an organization afloat, but the award’s recipients say that its biggest contribution is to raise their profiles, making them competitive for national grants and affirming their work locally. Last month, Kavana was included in Slingshot, a guide to 50 of the country’s most creative Jewish organizations. But the award is no guarantor of long-term success.

“The problem with financing innovative projects is a major one,” said Rabbi Dov Gartenberg, the founder and director of the outreach organization Panim Hadashot: New Faces of Judaism. Best known for engaging Jews in their homes with Sabbath meals, elaborate holiday Seders and an emphasis on hospitality, Panim Hadashot won the first Levitan award in 2005 but ceased operating after three years. “We were really having a lot of success, but ultimately it was too difficult to raise the amount of funds to be viable. I think there has to be a broader or deeper approach to innovation in the community.”

That is something that may not have happened yet. According to Dan Levitan, the committee is looking for ways to innovate the award itself, perhaps changing how the winner is publicly announced, in order to increase its visibility.

“If this award helps raise the dialogue of how we innovate,” Levitan said, “then one of its objectives will have been met.”