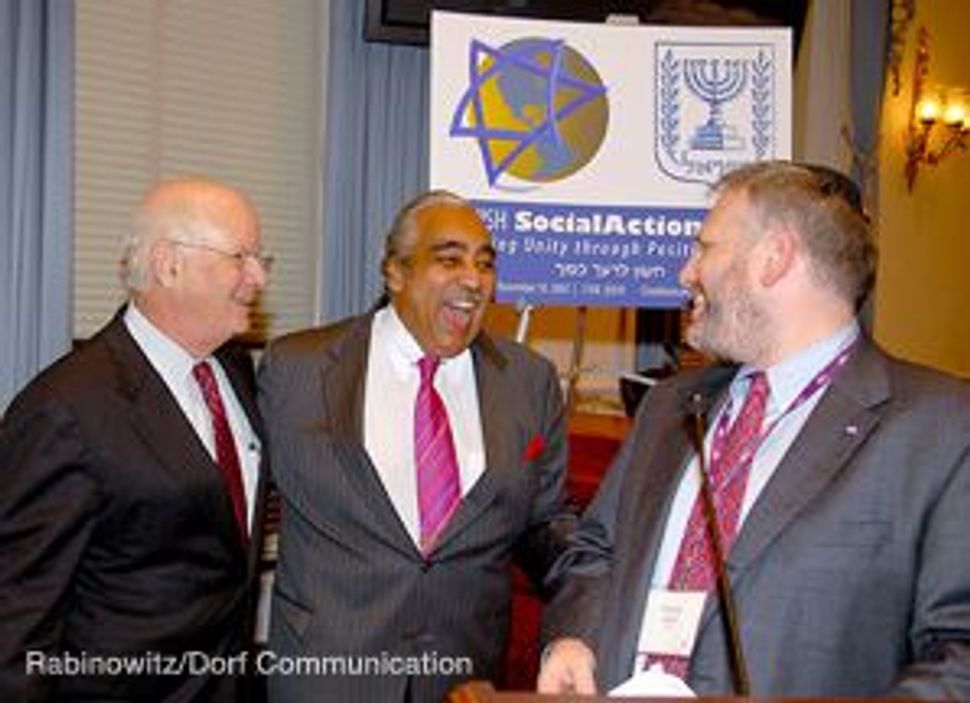 PUSHING FOR PASSAGE: The UJC's William Daroff, right, has spoken with Rep. Charles Rangel, middle, about the importance of the Public Good IRA Rollover Act.

With one of the most significant tax incentives for charitable giving set to expire by the end of the year, philanthropies and foundations are pushing lawmakers to make the tax relief permanent, allowing senior citizens to continue to transfer to charitable causes, tax free, funds from their individual retirement accounts. 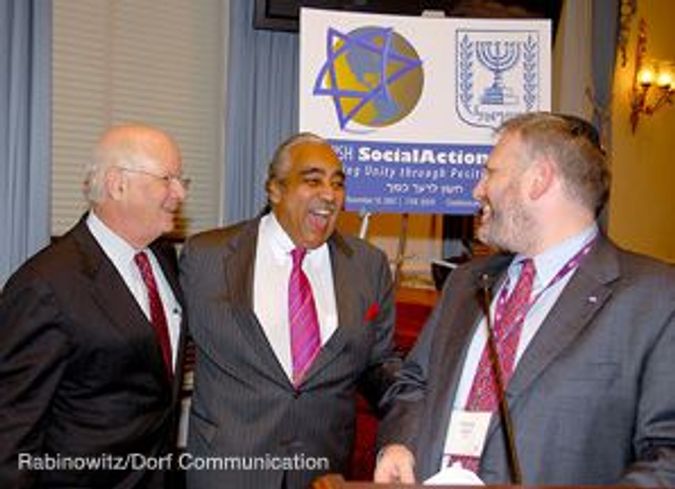 PUSHING FOR PASSAGE: The UJC's William Daroff, right, has spoken with Rep. Charles Rangel, middle, about the importance of the Public Good IRA Rollover Act.

The temporary measure, called the IRA Charitable Rollover, was enacted last year and went into effect this past January. It was a first attempt to turn IRAs into a vehicle for charitable giving, offering a tax exemption for people over 70 and a half years of age who use funds from their IRAs to make donations to charity. (Before the measure took effect, those donors would have been required to pay taxes on IRA rollovers to charitable organizations.)

An estimated $104 million has been donated so far to charities from IRA accounts, but professionals in the philanthropy field estimate that if the measure becomes a permanent law, the numbers will soar once both donors and foundations become aware of the tax break.

“When you look at the different pieces of legislation being presented to Congress, the proposal calling for a permanent IRA charitable rollover is the one that will have the greatest impact to benefit charity,” said Jeffrey Solomon, president of the Andrea and Charles Bronfman Philanthropies.

The proposed bill, known as the Public Good IRA Rollover Act, now has more than 80 co-sponsors in the House and more than 20 in the Senate. But while the bill enjoys widespread bipartisan support from lawmakers, the administration opposes the measure because of its high cost in lost tax revenue.

If the bill does not pass, lawmakers are also considering the possibility of extending the temporary measure for another year or two as part of a must-pass package of taxation provisions that is expected to be approved by the end of the year.

“I have spoken with Ways and Means Chair Charlie Rangel about this issue, and I am comfortable that he will do what it takes to make sure that this very important legislation is passed,” said United Jewish Communities’ vice president for public policy, William Daroff. UJC is an umbrella organization of Jewish federations.

The tax measure includes several limitations on the ability to use IRA funds for charitable gifts: The distribution given to charitable causes cannot exceed $100,000 a year, and the receiving charity cannot be “donor advised,” a term relating to foundations in which the donor can advise the charity on how to spend the money.

For many Jewish charities, this restriction is seen as a major impediment, since donor-advised charities have been a significant tool in building endowments.

“Donor-advised charities supply the donors with professional management and expertise without excluding them from the process,” said Steven Woolf, senior tax policy counsel for UJC’s Washington office. “It makes people become involved in the community.”

Gary Tobin, president of San Francisco’s Institute for Jewish and Community Research, agrees that donor-advised funds are a crucial vehicle for the Jewish community. “The significant growth of federations’ foundations is thanks to donor-advised giving,” said Tobin, one of the leading researchers in the field of Jewish philanthropy. He believes that new legislation should relax the restrictions that prohibit IRA funds from being given to donor-advised foundations, though he adds that the law should make clear that these foundations must have a minimal payout. “It is a good thing to have incentives for charitable giving, but we must also make sure that the money is actually spent on charity,” Tobin said.

The restriction, now being lobbied against by Jewish philanthropies, did not stop all Jewish causes from receiving funds under the temporary measure; many Jewish organizations that are not donor advised benefited despite the restriction. The Jewish federation system enjoyed contributions of more than $10 million from IRAs since the tax incentive was put in place, and it expects more to come in future years.

One of the programs meant to encourage older Jewish givers to use their IRA funds for charity in the community involves grandparents who are asked to contribute to their grandchildren’s Jewish day schools, which qualify for the IRA charitable rollover plan.

For non-Jewish causes, even with the restriction on donor-advised charities, the IRA charitable rollover measure has allowed a steady stream of new money to enter the system. Independent Sector, a coalition of more than 600 philanthropic organizations that is a leading voice in pushing forward legislation regarding IRA rollover provisions, has provided several examples of groups that have already benefited from the temporary measure: A group in Wisconsin that supports learning programs at adult day centers received $20,000 from a mother whose adult child has Down syndrome. A Lutheran charity in North Dakota got $15,000 from a donor who otherwise would have given a smaller gift. And a Franciscan foundation in Tacoma, Wash., got $10,000, which will be used for a new cancer center.

Major recipients of funds using the IRA rollover measure also include colleges and universities, which now are able to immediately receive part of estates that otherwise would be given only after the passing of the donor.

The National Committee on Planned Giving conducted a survey among its members on the use of the new tax provision in charitable giving, and found that almost 6,000 individual distributions from IRAs were made as of September. This number, according to advocates of the tax break, indicates that the public is interested in giving IRA money to charity and will continue to use the measure if it is made a permanent law.

“This new tax provision increases giving,” Woolf said. “It not only makes money available for charity at an earlier stage, but also brings in new money from people who established retirement funds but now see they don’t actually need all the money.”