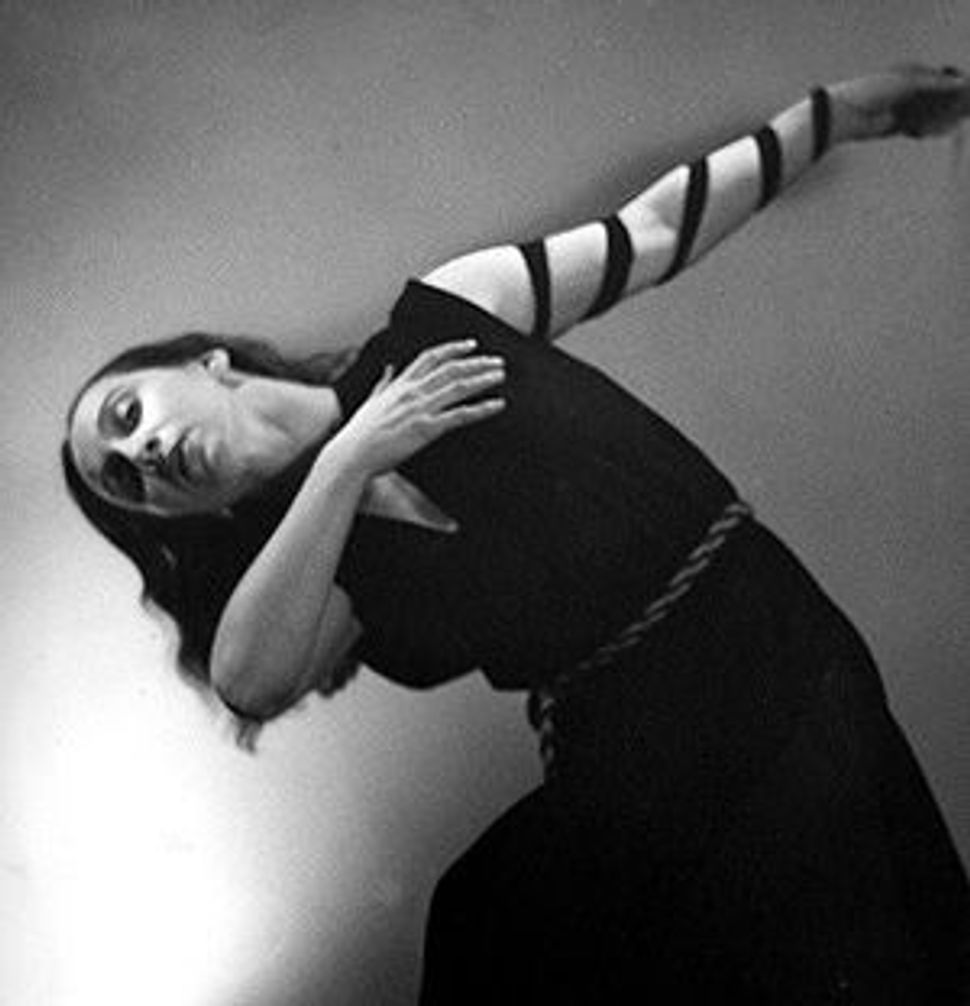 Bound To Move: Anna Sokolow dances her ?Kaddish? in 1945 with a symbolic tefillin wrapped around her arm. Image by MARTHA KRUEGER, THE SOKOLOW DANCE FOUNDATION

Alvin Ailey danced for her as a young man. She worked with Elia Kazan and Tennessee Williams on Broadway, and taught Patti LuPone and Robin Williams at the Juilliard School. Anna Sokolow passed away in 2000 at the age of 90; she would have been 100 years old in 2010. This inventive, elegant yet gritty New Yorker studied dance at the Henry Street Settlement, took classes with Martha Graham and then danced for her beginning in 1929 before eventually choreographing her own work for the better part of 60 years. A worldwide series of retrospective events honoring Sokolow began in September with the company Catherine Gallant Dance’s performance of “Andante Amoroso,” a solo piece inspired by Isadora Duncan, at Joyce SoHo, and performances of her 1955 classic “Rooms” by Introdans, the leading Dutch contemporary dance company, from November 6 to November 8 at the Holland Dance Festival in The Hague. 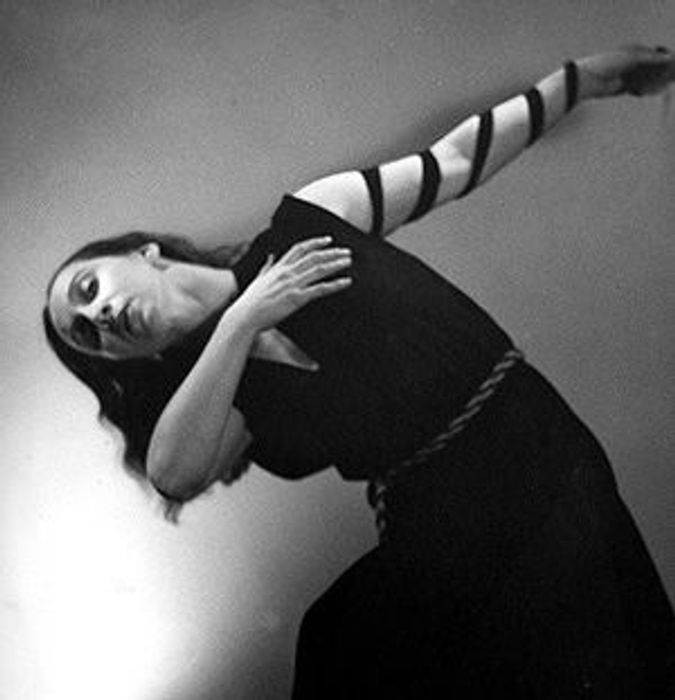 Bound To Move: Anna Sokolow dances her ?Kaddish? in 1945 with a symbolic tefillin wrapped around her arm. Image by MARTHA KRUEGER, THE SOKOLOW DANCE FOUNDATION

Born into a poor émigré Russian-Jewish family that placed a high value on culture, Sokolow followed in the daunting footsteps of Duncan, Doris Humphrey and Graham. From the late 19th century until the middle of the 20th, these four women — along with José Limón and Merce Cunningham — helped to found a new art form known as modern dance, which has since spread across the globe. Modern dance introduced a completely new way for dancers to move and express themselves onstage. Less formal and restrictive than ballet, and willing to take on topics shunned by the latter, modern dance deconstructed the ritualized, formal and anti-naturalistic artifice that ballet had thrust on dancers since it was developed at the French court in the late 16th and 17th centuries and then refined in the 19th and 20th centuries by a series of Russian choreographers such as Petipa, Fokine, Massine and Balanchine.

Today, when young dancers and choreographers opt to work in a modern rather than a balletic idiom, it is thanks to these early pioneers. But when Sokolow was a child, modern dance was a completely unknown quantity. In fact, Agnes de Mille relates that when Sokolow declared she was going to become a modern dancer, her mother locked her in the bathroom, fearing that she would become a prostitute. Sokolow escaped out the window, or so the story goes.

Sokolow is best known to Jewish audiences as the creator of “Kaddish” and “Dreams.” In “Kaddish,” (1945), dramatically set to music by Maurice Ravel, Sokolow stood onstage, immersed in prayer with a leather strap wrapped around her arm to symbolize tefillin: In one fell swoop of choreographic chutzpah, she challenged existing religious, ethnic and gender norms. Equally daring is “Dreams,” which, created in 1961, depicts survivors trying to piece together their lives after the Holocaust. Set to music by Johann Sebastian Bach, Teo Macero and Anton Webern, “Dreams” predated the 1978 television miniseries “Holocaust” by almost 20 years, and the film “Schindler’s List” by more than 30. A 1953 visit to Israel that was sponsored by the America-Israel Cultural Foundation, where Sokolow worked with the talented Israeli-Yemenite ensemble Inbal Dance Theatre, affected her greatly and cemented her dedication to Jewish culture. Over the decades, she portrayed many historical Jewish female figures, including Ruth, Hannah Szenes and Golda Meir.

Sokolow also championed underdogs and people whom she felt society had abandoned. Modern urban alienation and the fate of the individual in an increasingly depersonalized world were also of great concern to her, as evidenced in “Rooms” (music by Kenyon Hopkins), with its spare set made up uniquely of chairs, each one symbolizing a room in an apartment complex and its residents’ attendant anxieties. The work is powerful in its bare, raw depiction of human emotion, the dancers repeatedly stretching in agony and screaming in silence. For perhaps the first time onstage, two men reached toward each other suggestively, and whites and blacks commingled. Legend has it that people almost came to fisticuffs in the street after one production of the piece, claiming that what they had just witnessed couldn’t be considered dance at all!

Too racy for its time, “Rooms” was even banned in Australia in the 1960s. Another Sokolow piece, “Steps of Silence” (1968), made a strong anti-war statement, as bodies and trash ended up onstage indistinguishable, a not-so-subtle comment, perhaps, on the “trash of war.” “Art,” Sokolow averred, “should be a reflection and a comment on contemporary life… [the artist]… can change [society], presenting it with fresh feelings and ideas.” Some critics found Sokolow’s work overly somber, but Sokolow felt that she was simply representing society as it actually was: “I don’t have a dim view of humanity. I’m not neurotic. But I don’t have that happy philosophy, because what the hell is there to be happy about?’’

Sokolow’s contribution to dance went far beyond ethnic and religious boundaries. She was a groundbreaker who always reacted to what was going on around her, concerned with issues of humanity and human suffering. In 1939, at the invitation of artist Carlos Mérida, Sokolow traveled to Mexico, where she was instrumental in creating a government-sponsored modern dance company. She was also a maverick in terms of dance itself, perhaps the first choreographer to so narrowly marry theater and dance. This was especially true in her 1965 “Odes,” which, set to music by Edgar Varèse, influenced an entire generation of choreographers, including the late Pina Bausch, the doyenne of that hybrid form known as Tanztheater, or dance theater.

Jim May, a former Anna Sokolow Dance Company dancer who took over as artistic director of the Sokolow Theatre Dance Ensemble in 2004, remembers an entirely original and fiery creative force who, during his 1966 audition at the company studio at 1 Christopher Street, announced, “Prima donnas and company jumpers need not apply.” May taught an undergraduate class this past term at The New School, devoted entirely to Sokolow. Just a few blocks from where she once taught her eager charges, aspiring dancers, choreographers and dance critics, all of a younger generation, are learning about her legacy for the first time. In a recent class, May screened David Parker’s 2004 Sokolow-inspired “La Nef des Fous” (“Ship of Fools”), created especially for the Sokolow Theatre Dance Ensemble, and fielded tough questions about the posthumous reception of Sokolow as a choreographer. May noted that at the end of Sokolow’s 1965 “Opus 65,” the first modern dance piece ever performed by the Joffrey Ballet, the performers stopped dancing, looked out at the audience members and gave them the finger, and then jumped into the pit.

Sokolow suffered a nervous breakdown in the 1970s, but she quickly returned to dance and extended her work on such artists and writers as Franz Kafka, Frida Kahlo and Edgar Allen Poe, finding inspiration in their artistic excellence. Throughout Sokolow’s long and storied career, she was concerned with repairing the world. Each dance she choreographed was a new opportunity to set something right, to change something she thought had gone terribly wrong.

Christopher Atamian is a writer and translator. He is the former dance critic for New York Press, He writes for Dance Magazine and eCognoscente.com.