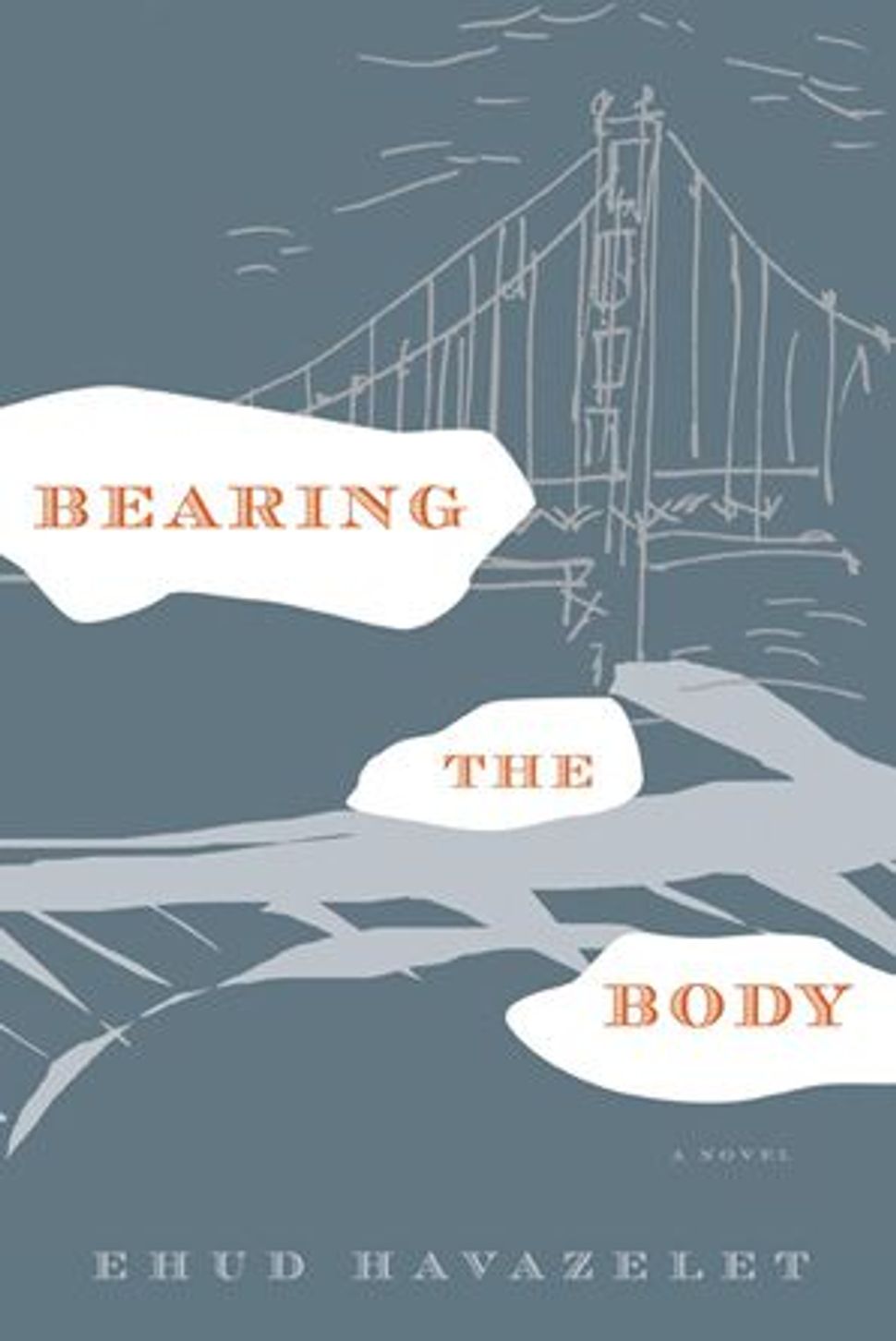 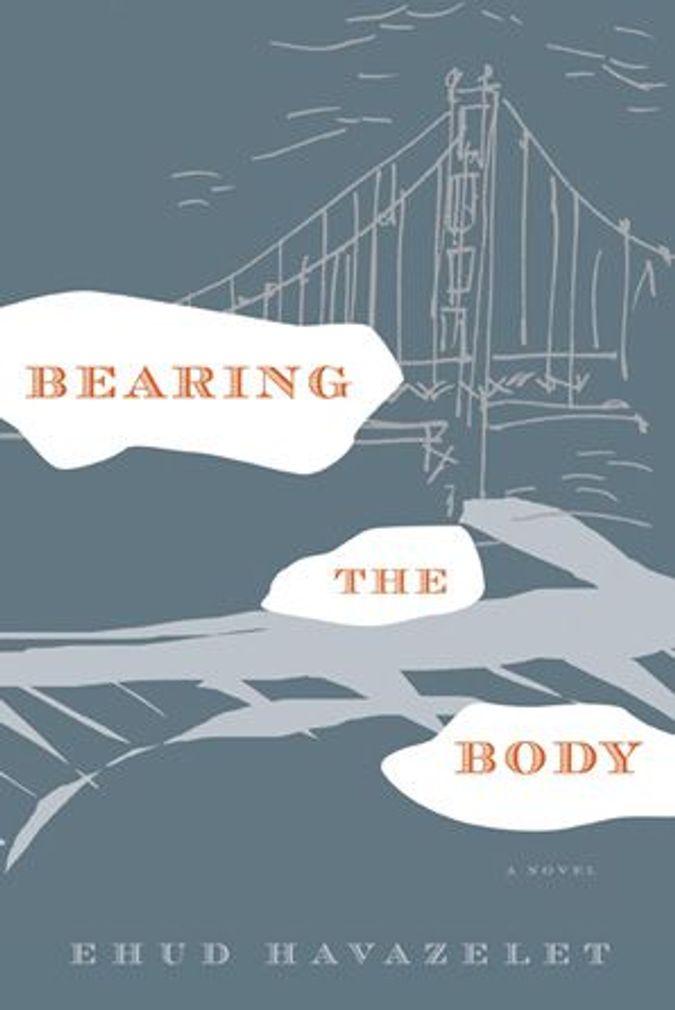 The revelation buried within Ehud Havazelet’s first novel, “Bearing the Body,” is welcome and rare: Upon first opening its covers, the thought occurs that this novel, as a body of work, must have been borne of a heavy labor (Havazelet’s last book was published almost a decade ago), and so that its plot or prose might have to be borne, as well, put up with or suffered. But read a page, or two or 10, and any pedestrian suspicion soon gives way to the lofty: Eventually, Havazelet’s debut rivals one of its vital images, San Francisco’s Golden Gate Bridge, for its aspirations, disbelief-suspension and tenuous beauty.

The title, can, if dissected, cut two different ways: One version pallbears the physical body of the deceased to its grave, while the other holds to a version of the metaphor offered above. The metaphysical body must be borne, too; the burden of humanness must be survived by the soul. Havazelet knowingly performs surgery, then, halving his titular pun, and so having his skin even while shedding it. The cadaver of the first version is the body of one Daniel Mirsky, revolutionary, drug addict and victim of murder. The other version’s body is equivocally tragic — history, the weight of Sol Mirsky’s Holocaust past.

The book opens with Nathan Mirsky, graduated as the oldest medical school student in his class, now serving his rotation in Boston. Returning to the home he shares with his girlfriend, Janet, he finds a letter in the mail, postmarked San Francisco. The reader is told that Nathan knows the letter is from his estranged brother, Daniel. What the reader doesn’t know, at first, is that Daniel has been dead for a week.

Nathan drives to his native Queens, New York, making the requisite pilgrimage: He stops in on his father, Sol, a retired salesman and amateur archivist. Since the death of Mother Mirsky, Freda, Sol has passed his time tracking transport numbers, informing the living relatives and friends of Holocaust victims of the specifics of their loved ones’ demises. Reflective road trips and historical trains are soon exchanged for an airplane, as Sol and Nathan fly to San Francisco, ostensibly to retrieve Daniel’s remains. But in a small, squalid rented room is to be found the first irony of many: There is only a box; Daniel has no body to bear. As Daniel was the son of a survivor of the ovens of Europe, his final defiance was to will himself cremated — asking, in essence, that his life, which burned brightly, too quickly, be flung in his father’s face as ashes: “survivor’s guilt” relapsed upon the already grieving.

Now, the novel’s business begins. The Mirskys meet Daniel’s girlfriend, Abby, and her son (not Daniel’s), Ben. Daniel, in his letters to Nathan, had mentioned neither. Sol is hospitalized for a wound received in a mugging. His momentary absence from the book brings Nathan’s own guilt and grief into view. Nathan’s relationship with Janet is deteriorating; his work in the emergency room is making him sick. Through the indiscretion of a detective, Rivera, the Mirskys find that Daniel was shot to death at the intersection of the territories of two rival gangs. Daniel was always a talker, never a doer, and so it seems shocking — both to his fellow characters and to their reader — that he’d gone to that alley armed with a gun of his own, though unloaded. Apparently, Bay Area schoolchildren, even Abby’s Ben, were employed as couriers of heroin, which Daniel had recently quit using. This prodigal son of Jewish Brooklyn and the Columbia University unrest had, in the Wild West, finally ventured at vigilance — converting his radicalism from café theory to ghetto practice, hoping to avenge the abuse of his adopted son and, perhaps, that of his own private demons.

What Havazelet has given us here is a story of patrimony, fraternity, and of guilt both individual and collective — moving, not just coast to coast but psychologically and emotionally, too, though ultimately exhuming the done before, and occasionally boring.

Such, however, is not an effect of Havazelet’s prose, which is always excellent and surprising — alternately loose and tight, as based on ear and image as opposed to received syntax or the belabored correct. Here is Daniel, in posthumous or epistolary italics to Nathan, reflecting on Sol after the death of their mother:

“Still, he’s Solomon the Adamant, the Aggrieved, the Last Angry Man. I don’t know what you expected but I thought, Look out, here it comes. Line up for the big show. Tough as this may be on him, the pain, even the dying, maybe, just watch what he’ll make it for the rest of us.”

From Adam’s earliest Adamancy to the finality of the Last Angry Man, this is masterful. Surprisingly, the voice of the narrator, the authorial third person, is equal in its sad calm to the immediacy of such “I don’t know what”:

“Nathan wondered, if he stood here forever, or just left the receiver dangling, how long would the phone in Boston ring? How long before somewhere between here and there cut in and requested that he hang up or redial? How long before a computer someplace decided he was taking up valuable time. Or till Angelo, their super, came in with his key and angrily slammed down the phone? Maybe it would just go on, hours, days, weeks. Maybe right now across America there were hundreds of phones ringing in empty rooms where no one lived anymore and where no one would be hurrying back to pick them up and say, Hello, sorry, are you still there?”

These quotations, diverse as they were written toward differing purposes, demonstrate the author’s shifty range and rhetorical power. As he has in his two previous story collections (1988’s “What Is It Then Between Us?” and 1998’s “Like Never Before”), Havazelet writes best when he writes wildly, freely, though with confident cadence. Any reservation, then, would be to diagnose not his treatments in language but the affliction of language with theme.

Patrimony, as a theme, is itself a patrimony — better left to the cemetery that was last season’s shelf. The familial has become all too familiar — especially in today’s literature of and by American Jews. We are not as pure, nor as purely suffering, as our forefathers, and for that we should be thankful, or otherwise occupied, not always eulogizing or exhorting ourselves, sacerdotal or doting. When I say that Havazelet’s revel ation is buried, I mean this: Such magical prose should not be made to bear such workaday theme or plot, the plod of “the real.” Should Havazelet ever shed the skin of convention, the body bared should be modestly perfect — and a living master of American Jewish letters would be born.