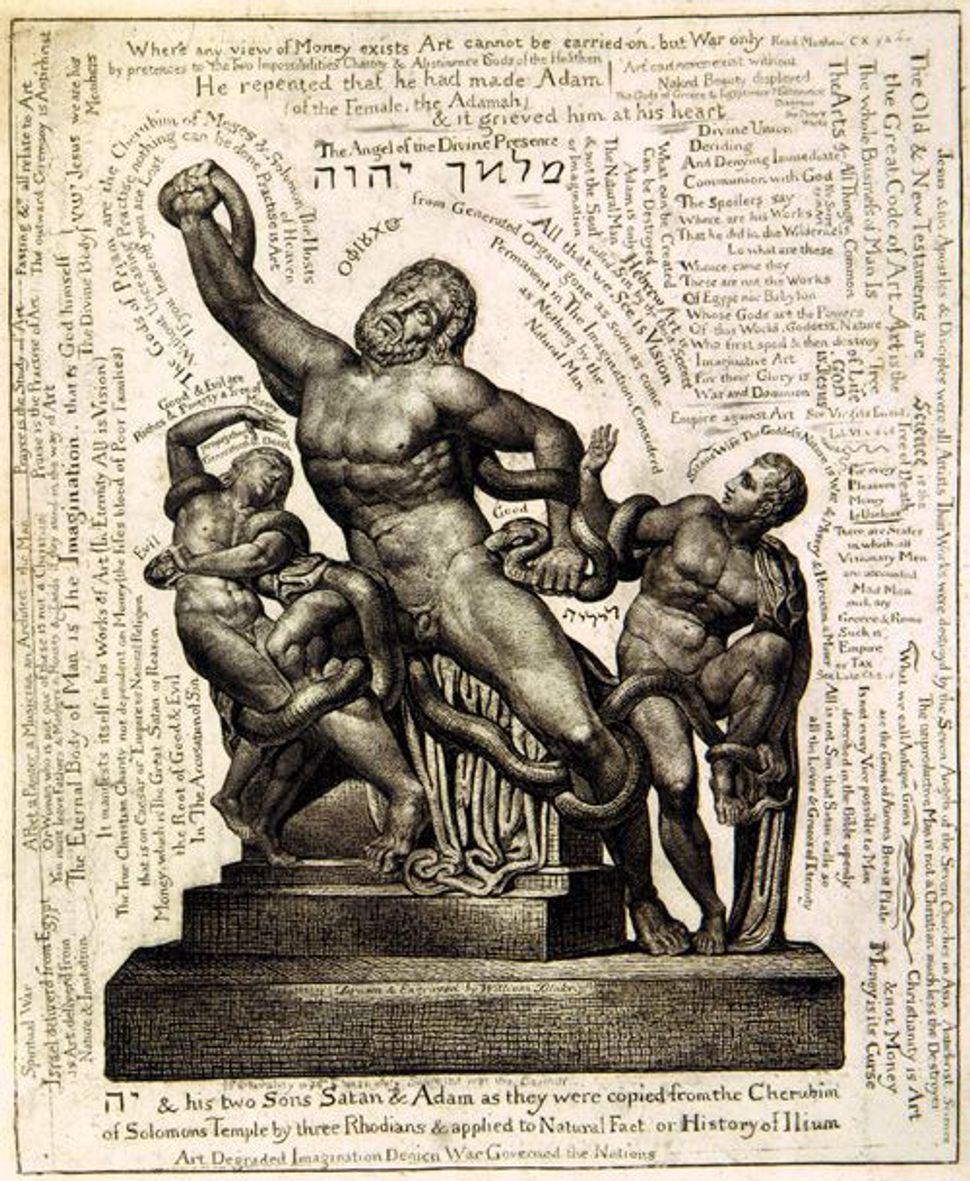 All Rhodes Lead to God: Blake concurs with Pliny the Elder in saying that ?three Rhodians? made the original sculpture. His graffiti-like annotations explain how Laocoön (with backward alef over his head) and sons Antiphantes and Thymbraeus fit into Blake?s own cosmic myth. Image by William Blake, ?Laocoön?

Two of William Blake’s greatest patrons were clergymen in the Church of England, under whose rites he was christened, married and buried. But the British poet and artist did not attend church for the last 40 years of his life, according to Encyclopedia Britannica, and he and his wife, Catherine, were registered as sympathizers at the Swedenborgian New Jerusalem Church. To further complicate Blake’s faith, “Thou shalt not” is “writ over the door” of the chapel in his 1794 poem “The Garden of Love,” which suggests that he identified faith with censorship. 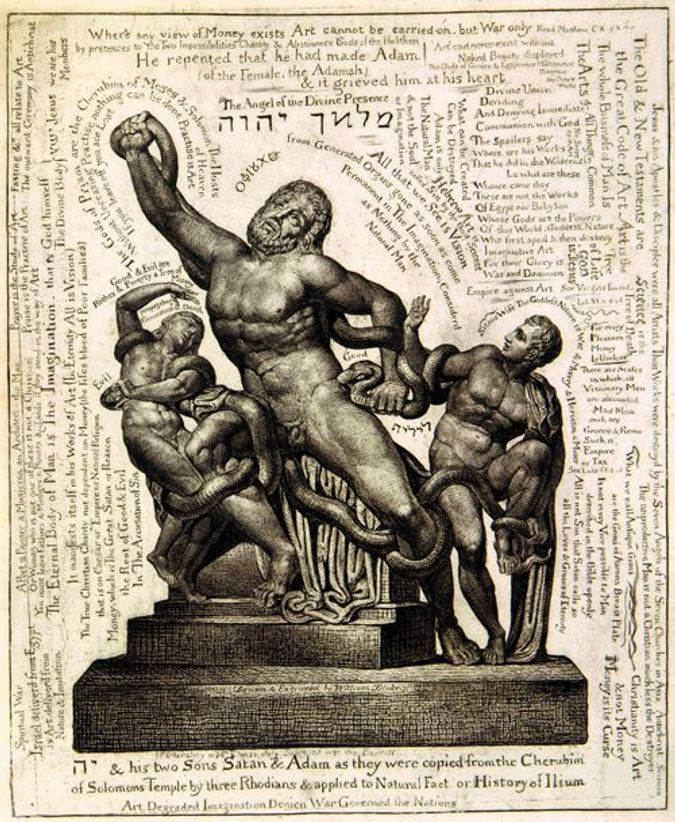 All Rhodes Lead to God: Blake concurs with Pliny the Elder in saying that ?three Rhodians? made the original sculpture. His graffiti-like annotations explain how Laocoön (with backward alef over his head) and sons Antiphantes and Thymbraeus fit into Blake?s own cosmic myth. Image by William Blake, ?Laocoön?

Further controversy surrounds Blake’s grasp of a particular type of faith: Jewish mysticism. It seems pretty clear that Blake’s art and writing invoke Kabbalah, but scholars debate how Blake accessed the Jewish mystical concepts he quoted. Some argue that the dozen or so Hebrew inscriptions in Blake’s etchings and watercolors show that Blake was fluent in Hebrew. But close analysis of the works, some of which are on exhibit at The Morgan Library & Museum, reveals that Blake had not even mastered the letter alef. Reading Kabbalah in Hebrew without knowing the first letter of the alef-bet would be as implausible as tackling “Finnegans Wake” with barely a grasp of the English alphabet.

Arguments that Blake knew Hebrew date back to Frederick Tatham, who cared for Catherine after Blake’s death in 1827. In a letter to bookseller Frances Harvey, Tatham said that Blake’s library included “well thumbed” books in Latin, Greek, Hebrew, French and Italian, as well as works by Swedenborg and Christian mystic Jacob Boehme. “His knowledge was immense, his industry beyond parallel,” Tatham wrote.

Modern scholars echo Tatham’s claim. Writing in the journal Modern Philology in 1951, David V. Erdman ascribed “some Hebrew” to Blake, particularly the knowledge that beth-lehem means “house of bread.” “We know that Blake knew a little Hebrew,” Anthony Blunt agreed, writing in the Journal of the Warburg and Courtauld Institutes in 1943, “for he wrote to his brother in 1803 that he was learning the Hebrew alphabet, and his etching of the Laocoön [a copy of the sculpture “Laocoön and His Sons”] bears a few words in Hebrew script.” In his book “The New Apocalypse: The Radical Christian Vision of William Blake (The Davies Group, Publishers, 2000), Thomas J. J. Altizer suggests not only that Blake knew Hebrew, but also that he was self-taught.

But the work that Blunt cites as proof of Blake’s proficiency in Hebrew, “Laocoön” — a circa 1820 print depicting snakes strangling the famous Trojan priest and his two sons — is one of the best pieces of evidence that Blake did not know Hebrew. Writing “malakh Jehovah,” which he translated as “The Angel of the Divine Presence,” Blake inadvertently rotated the alef 90 degrees on its y-axis. He spelled “Lilit” (Lilith) correctly, but he miswrote “Jeshua” (Jesus) with another rotated letter, this time an ayin (the 16th letter).

“Laocoön” does not appear in the Morgan show, but an etching from Blake’s Job series does. In the etching, Blake again wrote “The Angel of the Divine Presence,” but this time he wrote the Hebrew “melekh Jehovah,” which means King Jehovah, rather than malakh (with an alef), the Angel of Jehovah. In “William Blake’s Illustrations of the Book of Job,” S. Foster Damon says that Blake intentionally removed the alef to show that Job was worshipping a false God — mistaking an angel for the king. But could Blake really have known enough Hebrew to distinguish between “melekh” and “malakh,” when he revealed in “Laocoön” that he didn’t even know how to form the letter properly?

Another work at the Morgan, “Job’s Evil Dreams,” features a bearded figure with hooves encircled by a snake. The figure hovers above a reclining man and points with its right index finger to the Ten Commandments. Though Blake wrote out only two of the commandments in full, the inscriptions contain more than a dozen mistakes. One line contains a properly and an improperly formed alef, a further inconsistency suggesting that Blake was copying a language he did not understand.

“Blake did study Hebrew with his one-time patron, William Hayley, but scholars are not agreed about his proficiency in the language,” explained Leslie Tannenbaum, associate professor of English at Ohio State University and author of “Biblical Tradition in William Blake’s Early Prophecies: The Great Code of Art” (Princeton University Press, 1982).

According to Tannenbaum, the late Gerald Bentley, a Blake scholar who taught at Princeton University, implied in a biography that Blake was “fairly fluent” in Hebrew. But Tannenbaum also notes that Sheila A. Spector, whom he describes as “an extremely meticulous scholar and expert on Blake and the Kabbalah,” writes that Blake did not know the biblical language.

In Blake’s preface to the chapter “To the Jews,” from the poem “Jerusalem,” Tannenbaum sees references to the kabbalistic concept of Adam Kadmon (the primordial man). Blake learned Kabbalah from Swedenborg’s writings on Boehme, who seems to have been influenced by Balthasar Walther, Tannenbaum adds, and Blake also identified with the Avignon Society, which sought science and reason “in such unlikely places as alchemical lore, cabbalistic numerology, mesmerist séances, Swedenborgian spiritualism, and (perhaps most surprising of all) the Scriptures.”

In “Wonders Divine: The Development of Blake’s Kabbalistic Myth” (Bucknell University Press, 2001) Spector, an adjunct associate professor at New York University, agrees that Blake’s kabbalistic sources were Christian rather than Jewish, and English rather than Hebrew. Further, Blake was “unfortunately” influenced by his contemporary Anglo-Israelites, who thought that English derived from Hebrew “and that the language of the Jews was a spurious version in which the rabbis obscured the ‘true Christian’ message to be found in the Bible,” Spector said.

“Under the circumstances, the question of whether or not Blake was fluent in Hebrew misses the point,” she added. “He rejected normative Hebrew in favor of the linguistic gymnastics that re-interpreted words to conform with some eccentric – to be charitable – interpretations that coordinated Hebrew and English, as well as Greek, etymologies to proffer a new interpretation of Scripture.”

William Blake’s World: A New Heaven Is Begun opened on September 11 and runs until January 3, 2010, at the Morgan Library & Museum in New York.

Menachem Wecker, who blogs on religion and art is based in Washington, D.C.