Spinoza vs. Maimonides, For the Future of Judaism 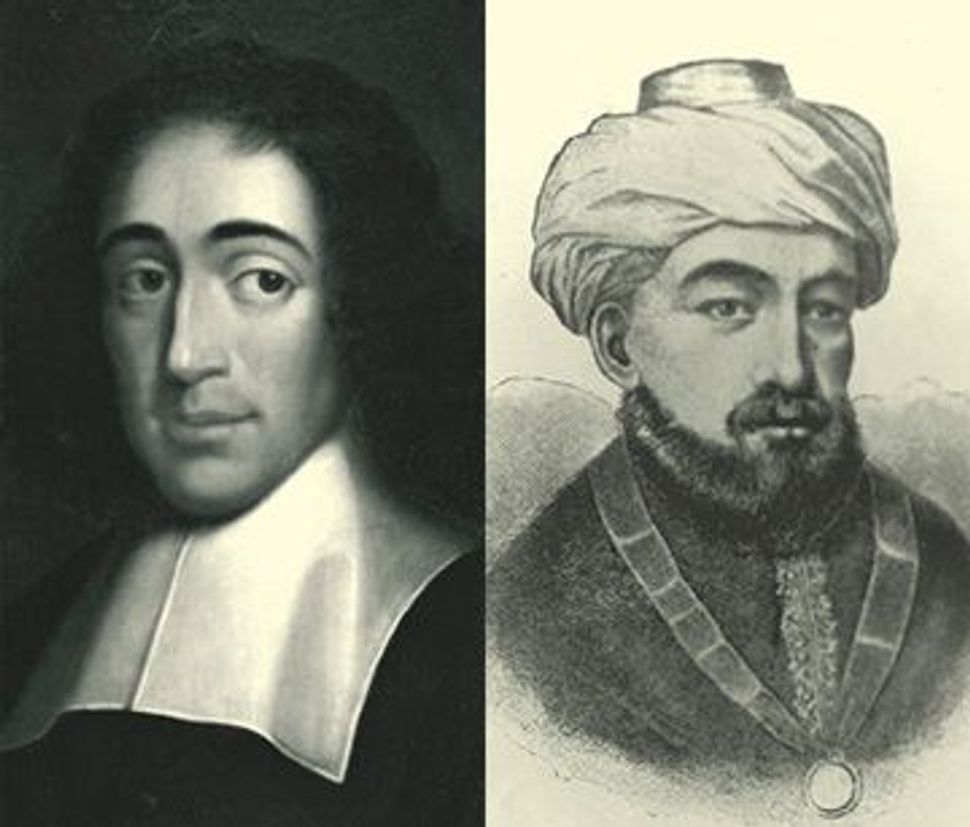 A Fight to the Life: Although they agree on God, Spinoza (left) and Maimonides (right) differ on most points of moment. Image by GETTY IMAGES 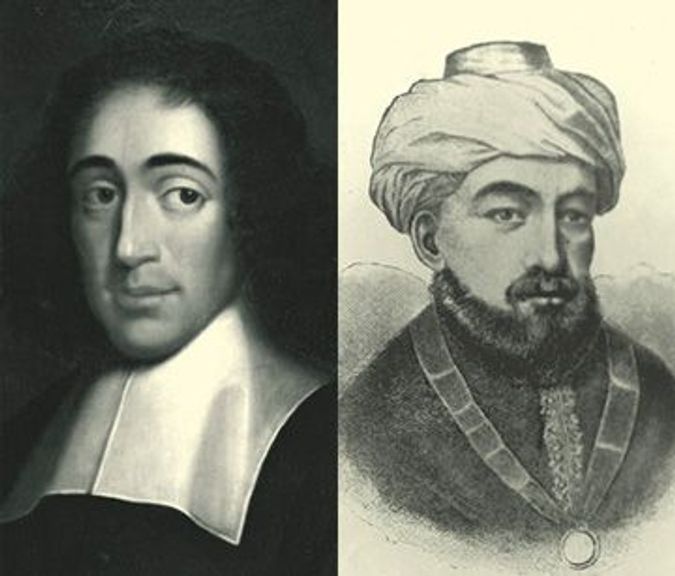 A Fight to the Life: Although they agree on God, Spinoza (left) and Maimonides (right) differ on most points of moment. Image by GETTY IMAGES

What does a 12th-century rabbi in Egypt, arguably the greatest thinker in Jewish history, have in common with a 17th-century Jewish philosopher in Amsterdam who was “expelled from the people of Israel” for “abominable heresies and monstrous deeds” and who would go on to become the most radical philosopher of his time? And what could their philosophical differences and similarities possibly have to do with us, many centuries later?

It depends. If the topic is the relationship between virtue and happiness, as well as how to eliminate irrational beliefs and superstitious behaviors from society, then Maimonides and Spinoza have a great deal in common. In fact, from this perspective, Spinoza carried Maimonides’s rationalist project to its ultimate logical conclusion.

But for Marc Angel, it is also about the future of Torah Judaism, its purification from superstitious elements and the strengthening of personal faith in the true God of the patriarchs and matriarchs. While Angel believes there may be much to learn from Spinoza and the challenge he poses to Judaism, his sympathies are wholly with Maimonides. Like Rambam, Angel is committed to a rational Judaism on an intellectual foundation and opposed to those who would hijack it into the realm of irrationality. The challenge for him, however, is to demonstrate how any religion grounded in divine revelation and committed to the idea of a providential God can avoid the charge of superstition.

Among the superstitions that both Maimonides and Spinoza combat is the anthropomorphization of God — the idea that God is a kind of person with a rich psychological and emotional life very much like ours, except infinitely greater. As Angel notes: “Rambam and Spinoza both located superstition in the realm of ignorance and irrational fear…. Rational people will learn to overcome the tendency toward superstition and will root their lives in reason and in an intellectual love of God.”

For Maimonides, however, the Torah is literally the word of God, communicated directly to Moses. It not only prescribes laws for worship and for religious, social and political organization, but also embodies metaphysical, theological and historical truths. For Spinoza, on the other hand, Hebrew Scripture is a work of human literature. While it may be a valuable source of moral guidance, it is not necessarily a source of truths about God, nature or human beings.

Moreover, Maimonides believed the ancient prophets to be morally and intellectually gifted individuals — much like philosophers, except with greater imaginative powers. Spinoza agreed with only this last point: The biblical prophets were distinguished by their particularly vivid imaginations. They certainly were not philosophers; indeed, they were not very learned at all.

Finally, Maimonides’s project in “The Guide of the Perplexed” is to reveal the foundations of the Law and to show that all its commandments are reasonable. Spinoza’s rationalism, on the other hand, leads him to conclude that Jewish ceremonial law is no longer valid; Moses instituted it for political purposes at a very specific historical moment. But with the destruction of the Temple, the ceremonial mitzvahs have lost their raison d’être.

For all these reasons, Spinoza has often been seen to prefigure a kind of secular, even Reform Judaism. But Angel wisely rejects this conclusion. He sees that what Spinoza is after is not a reform within Judaism, but a reform of religious sensibility altogether. What Spinoza calls “true religion” has to do not with sectarian observances, but simply with moral behavior toward others. As Angel puts it, Spinoza “shed his Jewishness without much remorse and may have seen himself as a prototype of what Jews (and all other human beings) should become: just plain human beings devoted to rational philosophy.” Maimonides, by contrast, sought an intellectually grounded Judaism devoid of superstition but not of its distinctiveness, a Judaism still wedded to the strict observance of Jewish law and ritual, and even certain doctrinal beliefs. Angel makes it clear that he sides with Maimonides against not only the hyper-rationalism of Spinoza, but also any attempts to ground Judaism in the irrational (his primary target is the Hasidim).

This is a thoughtful, engaging and accessible book, no mean feat when writing about such notoriously difficult thinkers. But the success of Angel’s project depends on how well he manages tensions that will be apparent to contemporary rationalist critics of religious belief. For example, while decrying attempts to import superstitious elements into Jewish practice (talismans, prayer for hire, etc.), he suggests that (according to Maimonides) the harm they bring includes the loss of one’s portion in the world to come. And Angel himself apparently believes in the efficacy of prayer, because “God is always present and listening everywhere.” These and other elements of even an “intellectually vibrant” Judaism will strike nonbelievers as no less superstitious than red strings and amulets.

In a way, the title of the book is misleading, suggesting, as it does, that Spinoza has something positive to contribute to a revitalization of Judaism. A more apt title would have been “Maimonides or Spinoza.” In fact, Spinoza has only a supporting role to play in Angel’s story. He sets the challenge for Judaism, to which someone like Maimonides must respond: How can there be a faith-based sectarian religion that is informed by rational thinking, one that avoids the Scylla of irrational faith and the Charybdis of rational unbelief? Spinoza denies that there can be any such thing; Maimonides wrote the “Guide” to show that there can. If Maimonides is the hero of this tale, Spinoza is its anti-hero.

Steven Nadler is chair of the department of philosophy at the University of Wisconsin-Madison and author of “The Best of All Possible Worlds: A Story of Philosophers, God, and Evil” (Farrar, Straus and Giroux, 2008).

Spinoza vs. Maimonides, For the Future of Judaism